A traditional touring set up is much easier for delivering presents than that used for bikepacking
By Sam Jones
Friday, 21 December 2018

Cycling UK’s Sam Jones is dreaming of a white Christmas, but his reasons are less about living in a winter wonderland and more about a wish for frozen firm earth as he tries to ride home for Christmas.

For those of us who have to travel far over the Christmas period to be with family, it’s a period of time to be endured rather than enjoyed (some might say the same applies to the Christmas festivities too).

It’s peak season for traffic jams: the RAC estimates over five million journeys will be made by car this Thursday and Friday; and as less people are travelling to work between Christmas and New Year, it’s also the time for rail works (see the National Rail website if your journey could be affected).

I won’t have access to a car this Christmas, and as I travel from Cycling UK’s office in Guildford, Surrey to North Dorset, cycle-rail would be my normal option. Travelling with a bike on trains crowded with presents and travellers, is not a welcome prospect, and given there will be even more limited trains running due to strikes on South Western, cycle-rail is not really a feasible option for me this year.

Fortunately, I do not need to be at my folks until Christmas Eve. With the office closing Friday afternoon, that leaves me plenty of time to cycle 100 miles at a reasonable pace and still be in time for mince pies and Midnight Mass.

Last year, I tried to make this journey off-road, but was beaten by the mud and boredom of dragging my bike through quagmires after 80 odd miles.

It had been relatively dry for the year, but this December it’s been terrible across the South East and South West. Regular soakings for the past two weeks have made some local trails unrideable (at least not responsibly), and sadly the conditions don’t look to change across the weekend.

Oh for a true white Christmas! The roads might be too unsafe to cycle on at times like this, but with voluminous tyres, the off-road trails can be a real delight as you bundle through a landscape wrapped in its shroud of snow. The air is crisper and the world feels more quiet and at peace. Sadly this year it is not to be.

While it might make a classic Christmas film to see the protagonist go through misery until some good old Christmas spirit turns the frowns upside down, I’d rather skip the former and head straight into the latter – especially as a wet South Downs Way is guaranteed to be wretched. 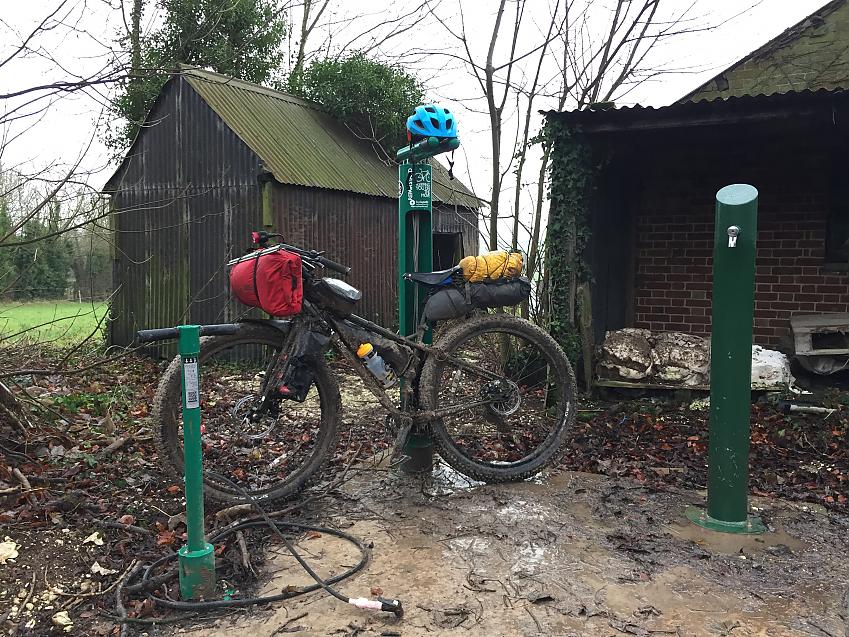 Salvation can be found on the South Downs Way

Fortunately, all this rain means it’s too warm for snow, frost and ice, and that opens up a road alternative. While I’d much prefer to enjoy the peace of countryside trails, heading out on the road is far less of a headache when it comes to the transportation of presents as I can load up panniers rather than try and find innovative ways to fit a Panettone into a seat post bag that don’t involve eating most of it.

Navigation is also much much easier on the road and far easier to plot a route with. This year I’ve had great joy with Cycling UK’s Journey Planner which gave me three choices of route: fast, balanced and quiet.

I’ve chosen the Goldilocks of routes: the balanced. This route avoids the fastest stretches (though given the traffic estimates I could actually be speedier!) and also well-known mud baths, like the South Downs Way, which the quietest route wanted to send me on. At 98.79 miles the balanced route is just right. It takes me on quiet unfamiliar roads and lanes (always a joy), while being the perfect distance for a two day ride with an overnight bivy.

Rain threatens, but adventure beckons and there's the prospect of warm welcomes and log fires at the end, so what's not to like?

You can see how Sam did on Cycling UK’s Strava club or by watching the Relive film below, and if you’re out riding this Christmas and New Year, whether on long distance journeys home then make sure to tag wearecyclinguk into your cycling adventure pics on Instagram.

Great Rides: Bikepacking from Surrey to Dorset View
Help break the cycle of social isolation this winter
Find out how Community Cycle Clubs are one answer