Last night, for our second installment of An Audience with... we were joined by none other than cycling megastar, Lizzie Deignan. Olympic Road Race silver medallist, 2009 World Track Champion, 2015 World Road Race Champion and new mum, Lizzie gave Cycling UK's Anna Glowinski an insight into her career and those life-changing decisions.

Lizzie Deignan was discovered as a cycling talent aged 15 when the British Cycling Talent Team came knocking on her school's door. As a non-cyclist, it was a new world for her, in fact, one that she considered quite “uncool”, but she went for it anyway, inspired by the idea of being the best at something.

Throughout the interview, time and again, it became apparent that for Lizzie, it is easier to follow her heart than not. Despite having already won a gold medal in the Track World Championship's team pursuit, she decided to forge her own path in road racing, taking advantage of the Dave Rayner fund and driving herself to live in Belgium, simply because she liked the discipline better. "At the time it didn't seem like a big deal, I had a small car, I packed it up and drove to a house in Belgium...I just needed to do what I enjoyed."

And it paid off!

"In Richmond I was one of the favourites going into it, to be able to deliver as a favourite was a bit surreal really".

Through experience, results and limelight, Lizzie has found herself regularly speaking out about the rights of women's pro cycling. 2020 was set to be a big year with the UCI having implemented many new rules regarding pay and support for professional racing and Lizzie reckons that those changes were already starting to have an effect on the competitiveness of the sport.

I feel like the ball was really beginning to roll in pro women's cycling, I feel like we're finally starting to move places. I hope that the current situation doesn't put a stop to that.

"I feel like the ball was really beginning to roll in pro women's cycling, I feel like we're finally starting to move places. I hope that the current situation doesn't put a stop to that".

Cycling and being pregnant

One of the most interesting topics of the night was Lizzie's experience becoming a mum whilst still maintaining her career, something that most female athletes put off until they retire. Following her heart once again, Lizzie just felt like it was right for her and her husband to start a family. With a distinct lack of advice out there for women in her position, Lizzie had to find her own way, reaching out to another successful pro/mum, Dame Sarah Storey.

"I actually just decided to focus on what felt right for me. I rode my bike 3 days before Orla was born, just really easy, I never did any intensity....I thought before I got pregnant, oh gosh, I'd never risk it, I'd never go outside. But actually, when you're pregnant and you're on an emotional rollercoaster anyway, I found I really needed that outside space on my bike to cling to".

And after Orla was born, she gave it 6-weeks until she felt okay to get back on a bike again, not least because it was doctors recommendation but also life with a newborn was incredibly overwhelming."

"In terms of tiredness, you're fatigued in terms of your mental capacity...but the physical aspect of it, it's almost like you have a different energy pathway, you're shattered, I mean you're mentally exhausted, but physically it's different, you don't feel that tired when you get on the bike I didn't find".

We want to say a huge thank you to the audience, it was brilliant to have everyone so involved and joining in the chat.

Next week, Anna will be chatting to broadcaster and author Rebecca Charlton. 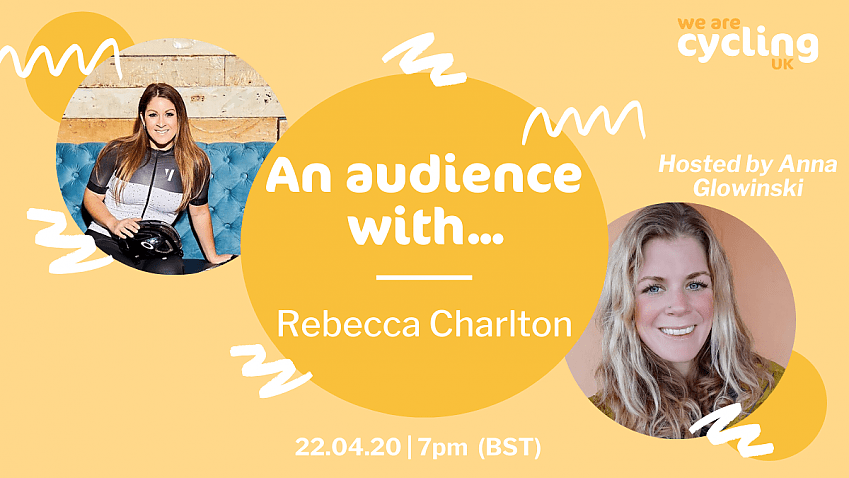 An Audience with... Rebecca Charlton View

An Audience with… Veronique Sandler View