Are e-bikes a danger to pedestrians?

Are e-bikes a danger to pedestrians?

Following a recent trial in the Old Bailey, there have been headlines of the “first e-bike death” in the UK. Cycling UK Campaigns Manager Keir Gallagher observed the trial, and reflects on the perceived risks e-bikes pose.

On a warm summer’s day back in August 2018, Thomas Hanlon was riding north on Dalston High Street, when he collided with a pedestrian, Mrs Cihan, crossing the road.

Tragically, the resulting clash of heads caused injuries which resulted in Mrs Cihan’s death the next day. I know I speak for everyone at Cycling UK in expressing our sincerest sympathies with Mrs Cihan's family.

I speak for everyone at Cycling UK in expressing our sincerest sympathies with Mrs Cihan's family.

As details from the collision began to trickle out, it became apparent that Mr Hanlon was riding a bike powered by an electric motor.

Despite very limited details of the circumstances or the nature of the vehicle, newspaper comments sections and social media discussion responded on cue, with some suggestions that e-bikes were the latest menace of the roads, alongside criticism, from some corners, of the rider for leaving the scene, without waiting to hear of his medical condition following the crash (he was concussed).

At the time, Cycling UK highlighted the lack of evidence suggesting legal e-bikes pose any greater risk to pedestrians than normal cycles (which in themselves pose a very low risk, especially when compared to motor vehicles), but also that we should not jump to conclusions until the details become clear.

Having just spent a week at the Central Criminal Court in London following the case, I can certainly reinforce the importance of the latter point.

Now that the evidence has been laid out and a verdict reached, key questions have at last been answered, particularly in respect of the so-called e-bike involved.

E-bike is a difficult term, simple on the surface but cloudier below.

In legal terms, e-bike as a word is meaningless, and everyone who uses the word e-bike...may actually mean something different.

In legal terms, e-bike as a word is meaningless, and everyone who uses the word e-bike, be they journalist, judge or member of the public or of Parliament, may actually mean something different. Some may mean regulated pedal assisted cycles which you can legally ride on the road, others may refer to off-road electric bicycles for use on private lane, while another may even be discussing a vehicle visually resembling a moped or motorbike, powered by an electric motor, with top speeds similar to a car.

However, the colloquial term e-bike, I think it’s fair to say, is usually used in reference to the former, which are more accurately described as "electrically assisted pedal cycles" (EAPCs).

Legal regulations allow EAPCs to be driven on the road without a licence, MOT, insurance, or the other normal requirements of motor vehicles, provided that the power assist cuts out at 15.5mph and when the user stops pedalling.

Once the evidence was laid before the court, it quickly became apparent that Mr Hanlon was not riding an e-bike (i.e. an EAPC). Mr Hanlon was, for the purposes of criminal law, riding a motorbike, as the vehicle was controlled by a throttle and could exceed 15.5mph without pedalling.

So, while it certainly was an electrically powered two wheeled vehicle, I personally believe calling this the first e-bike death is misleading, albeit not necessarily incorrect.

Calling this the first e-bike death is misleading, albeit not necessarily incorrect.

In any event, despite the furore following the collision and arrest of the rider, what we now know is that this wasn’t a collision between a bicycle and a pedestrian, but between a motorbike and a pedestrian. As such, it does little to help us answer any question of the risks posed by e-bikes, in fact quite the opposite – it could easily give us false impressions.

Of course, that doesn’t stop us from raising the question – does the evidence show that e-bikes pose a greater risk to pedestrians than traditional cycles?

Well, the answer is simple: no.

Studies in The Netherlands, where e-bikes are significantly more popular than the UK, have found that e-bike users were no more likely than conventional pedal cycle users to be involved in a crash which required admission to an emergency department, by distance travelled, compared to normal cyclists.

While e-bikes are a new and growing trend, Cycling UK will keep a close eye on any new evidence in this area. 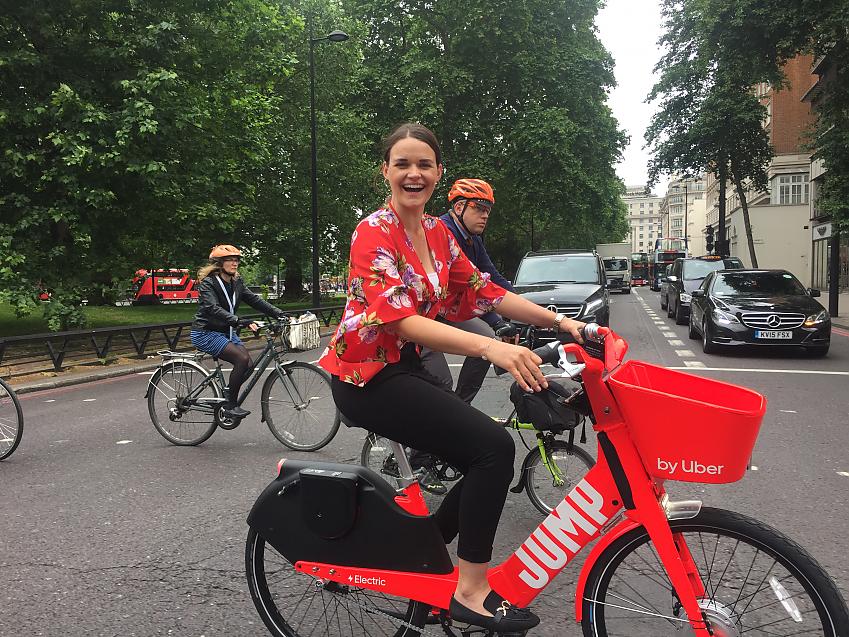 At this point in time, there’s absolutely nothing to suggest e-bikes are a dangerous vehicle. In fact their uptake could make our roads safer, as if more people start to use e-bikes instead of cars, this will actually reduce the risks to pedestrians.

What’s more, for riders themselves, many e-bike users report feeling safer riding an e-bike alongside cars and other motor vehicles, as it allows them to better flow with the traffic.

So while on the one hand there’s no evidence to suggest e-bikes pose a safety risk, what we do know is that they have the potential to offer an absolute revolution in mobility.

By helping to “flatten out” the hills and boost the range people can cycle, e-bikes enable someone to keep up the pace with a friend or partner, or to begin cycling to work when previously they found the hills too strenuous or the journey too long.

By giving new riders confidence, or experienced riders a boost to their overall distance (but not top-speed), e-bikes hold huge potential for getting millions of people more cycling in the UK.

E-bikes hold huge potential for getting millions of people more cycling in the UK.

However, these benefits will only be realised once more is done by Government to embrace e-bikes as a key aspect of the future of travel.

This means the Government should offer incentives for businesses and members of the public to trial and buy e-bikes and discover the benefits to themselves in the same way they have for other electric vehicles.

To date, all that has been done is clarify the rules on the Cycle to Work scheme, meaning people can now buy e-bikes. That is not enough, as it automatically rules out the elderly, the retired and those on minimum wage from enjoying the financial savings, and improved health which can come from replacing a car with an e-bike.

The bottom line is this: e-bikes aren’t dangerous, but failing as a country to take advantage of their potential could be.

Striking the balance on e-scooters View

Electric bikes and the law: What you need to know View