What are the three basic types of infrastructure for cycling?

What are the three basic types of infrastructure for cycling?

In this article, Cycling UK looks at the three main ways of providing high-quality space for cycling: physically protected space; streets with motor traffic filtered out and low speed limits; and routes entirely away from motor traffic.

In July 2020, the Department for Transport published new guidance on cycle infrastructure design (LTN1/20). We will be revising all our advice, policy and materials on infrastructure in the light of it as soon as possible. This exercise will include reviewing this page.

Potentially, high standard infrastructure for cycling can be created by providing:

The UK has a very limited history of designing high-quality protected cycle lanes. The tendency has been to create cycle tracks on the pavement instead, a far from ideal solution.

This is because such facilities separate cyclists from pedestrians at most by a line of white paint, and sometimes not even by that, and the result is a sense of conflict. They also undermine cyclists’ safety and priority at junctions, where this is most critical.

Lately, though, some local authorities have started to install high-quality protected lanes, typically created by reallocating road-space rather than pavement space, and designed as far as possible to ensure cycle and pedestrian priority at junctions.

Various pieces of research have been undertaken, both here and in the USA, to determine what forms of segregation are most suitable under what circumstances.

The general principle seems to be that the higher the speed and volume of the adjacent motor traffic, the greater the level of physical separation required.

For urban 30 mph streets, ‘light segregation’ - e.g. a line of ‘traffic wands’ - is often entirely adequate (see main photo). This provides much of the feeling of protection that enables less confident people to cycle, while occupying less space and costing a fraction of what is required for full kerb segregation (largely because there’s no need to realign drainage).

There are, however, pros and cons to different types of ‘light segregation’. Low-height solutions, such as ‘armadillos’ and ‘orcas’, have proved unpopular with both cyclists and other road users.

This is because they provide only a limited sense of protection, while presenting trip hazards to pedestrians and putting motor-cyclists at risk of slipping.

Where light segregation is appropriate, therefore, Cycling UK is inclined to favour traffic wands. We hope that engineering firms come up with more visually acceptable designs as this solution become more widely adopted.

A high level of separation (e.g. a hedge) becomes desirable for anyone cycling alongside a high-speed dual carriageway, especially if facing oncoming lorry traffic at night and/or in poor weather.

As far as existing guidance on segregation is concerned, we support that given in Highways England’s Interim Advice Note 195/16 and in the Welsh Government’s Design Guidance.

Good and bad crossings of side roads for parallel cycle facilities

With regard to the best infrastructure for helping cyclists on parallel facilities cross side roads, the following looks at both good and bad practice: 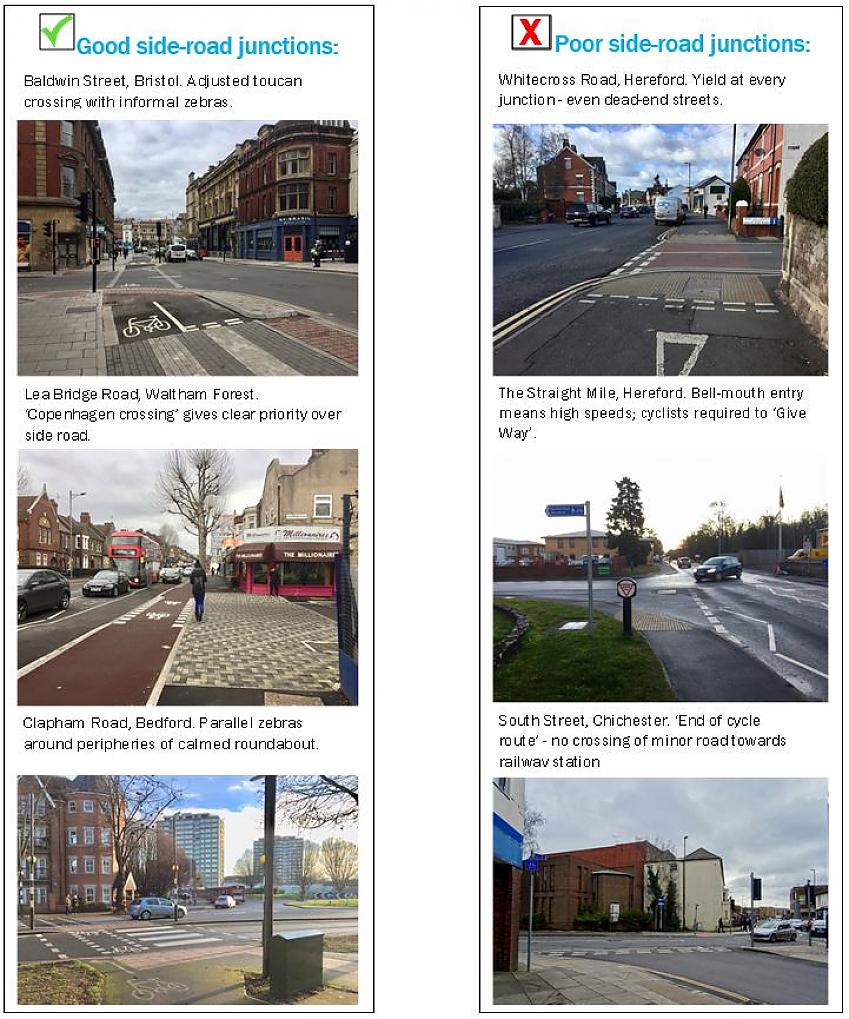 The following explains how street conditions can be optimised for cycling:

In many locations where the road system was laid out in the middle decades of the 20th century, the layout typical of major thoroughfares still persists even in residential areas, with the geometry suited to 40 mph speeds. In such places, it is not surprising that pedestrian and cycle use is so low, and the relative risks so high.

Roads with 7.3m carriageway widths are particularly problematic for cycling if traffic levels are high. They create individual lane widths within the ‘critical’ dimension that leads to conflict between on-road cyclists and following motor traffic (i.e. there is not enough room for a motor vehicle to overtake a cyclist safely).

No new roads designed for sharing between cyclists and other road users should therefore be built at this width.

Where driven speeds exceed these limits and/or where traffic flows are too high for safe and comfortable cycle use by people of all ages and abilities, local authorities should introduce design and traffic management measures to bring traffic speeds and volumes down to a suitable level.

Otherwise and where appropriate, they should apply higher limits on wider, straighter and more strategic main roads, but install physically separate cycle facilities along or beside them (see above), or on nearby parallel corridors (where these are at least as direct convenient, safe and attractive).

In addition to lower speed limits, low-speed streets and lanes should also be designed to limit access to through traffic, whilst maintaining through access by cycle.

Routes away from motor traffic

Canal or river paths, shared use routes in parks and open spaces etc., are valuable components of the cycle network. Entirely free of motor traffic, they attract less confident cyclists, or those out riding for recreational purposes. They need to be linked into the wider network of on-road routes to make them fully and conveniently accessible, and of high-quality design.

How the new Towns Fund could improve cycling View

Why and how do roads need to be better maintained for cyclists? View

How and why does transport spending need to be rebalanced? View

Why should the Government update, improve and rationalise cycle design guidance? View
Cycling UK continues to support the UK to cycle
This remains true during this difficult period with the ongoing threat of coronavirus Covid-19
Read our latest advice on cycling
Join Cycling UK to help us change lives and communities through cycling
Membership gives you peace of mind insurance, discounts in cycle shops, rides & routes
Join now