Why John Parkin is 'Designing for Cycle Traffic'

Why John Parkin is 'Designing for Cycle Traffic'

​Meet the ‘professor of cycle infrastructure’ John Parkin, of Bristol UWE’s traffic engineering department. His new book provides all the evidence for things campaigners know and feel but sometimes can’t prove – well, now we can. Rob Ainsley visits him in Bristol.

Tabloids might call John Parkin a ‘bike lane boffin’. More accurately, he’s Professor of Traffic Engineering at the University of the West of England, Bristol. He knows as much as anyone in Britain about what makes somewhere good to cycle round, and how better cycle provision can benefit everyone.

He’s also author of Designing for Cycle Traffic, a new book that has all the evidence, references and latest global research that we cycle campaigners can call on to back up what we often know, but can’t prove. The dense, peer-reviewed, academic (but readable) work is also a one-stop catalogue of current best practice for cycle infrastructure, with quotable stats in every column.

(Here’s an example at random: in the Netherlands, the health benefits alone of cycling are reckoned to supply 3% of the GDP, vastly outweighing the relatively colossal £500m spent annually on cycling.) 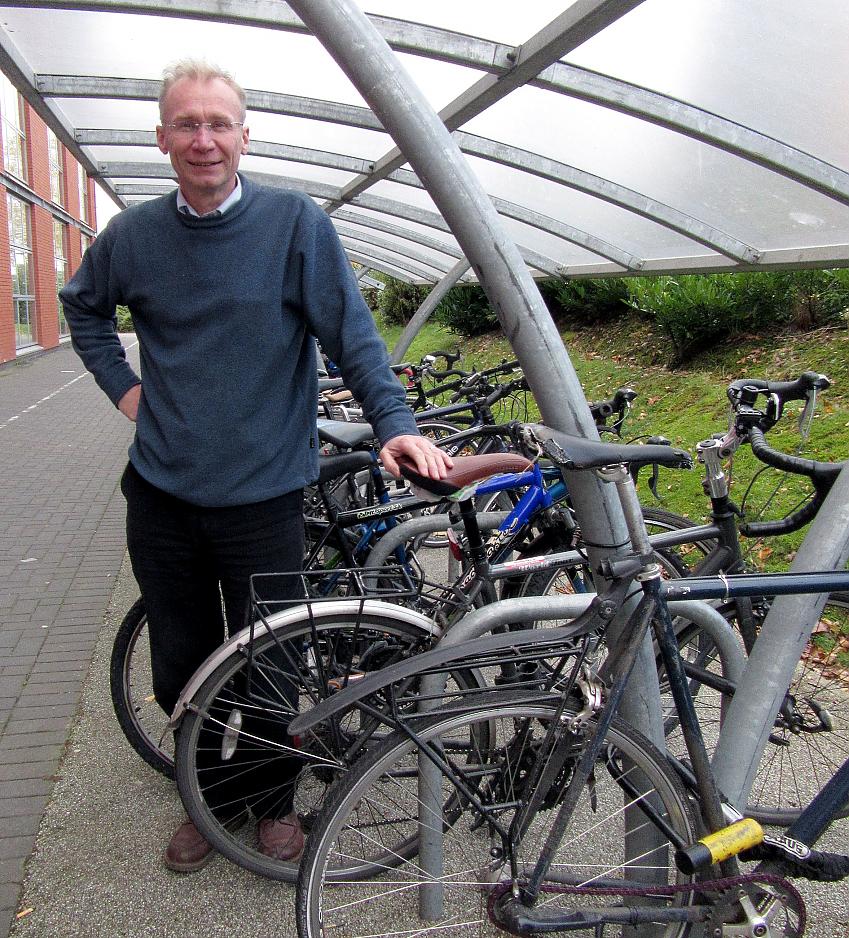 The book acknowledges and embraces all types of cycle: not just ‘fast road bikes to slow town bikes’, but also recumbents, trikes, handcycles and so on. It’s inclusive, society-based, and big on all-ability cycling. It may be primarily a handbook for students and professionals (trigger warning: there’s pages of design equations and formulae at the back) but it feels vivid and real for activists, full of crisply summarised and authoritative data.

It’s also a kind of phrasebook for talking the language of professional infrastructure. Engineers aren’t always interested in the economic, health or social benefits of cycling; their job is about safety and congestion. "They need to be persuaded that cyclists are part of the traffic, not some peripheral concern," said John. His book will help cycle campaigners to do just that.

It’s no surprise then that John, sitting opposite me in his compact office on UWE’s rural-feeling Frenchay campus, is a lifelong everyday rider: ‘a flat-cap cyclist’, as he calls himself. He breezes around Bristol with his wife on a Hase recumbent tandem, while a Ridgeback World Tour with raised bars enables his daily A-to-B stuff. There’s the inevitable Brompton too, no doubt handy for his academic and other travels.

A question of speed

"We are in a certain position in the UK", said John. "The people who dominate road design have no idea what the bicycle is capable of. There’s no idea that it’s a vehicle, legally – and one capable of speed."

The result, as we know, is cycle infrastructure that "assumes bikes are wafer-thin, able to turn on a sixpence, fit to be dumped onto a narrow path shared with pedestrians". He keeps stressing that bikes are fast vehicles, which need to be treated by designers as such.

The problem is money, of course. Every pound spent on cycling produces huge benefits, financially measurable and socially acknowledged. But "politicians often simply don’t believe the evidence," he said with a shrug and a smile.

Where things go off course

Grand cycle plans always seem to end up being a disappointment. John explains why. Road and cycle schemes are, in essence, one of two types: council or ‘Section 106’.

With council schemes, funding cuts and staff pruning means in-house experts are no more. Instead, design is usually sublet to a consultant and contractor, with the implementation overseen by the consultant. Often these independents simply don’t recognise the role of cycle traffic.

Otherwise – increasingly so nowadays – a scheme might be funded by a private developer. In return for their money-making opportunity, they have to fund some particular scheme required by the council by paying Section 106 money. Sadly this often means the developers do only what they can get away with. Their aims are profit, not sustainable transport, and they have the resources to fight for that.

In either case, laments John, what we end up with is often an isolated piece of infrastructure done on the cheap with no overall strategy: "fundamentally, we don’t plan for networks of cycling".

Reasons to be cheerful

But some recent developments show we can be optimistic. "Because London," said John. "Because Manchester. Because of what can happen with visionary politicians."

He points to the success of the East-West and North-South Cycle Superhighways in London. They’ve achieved the miracle of increasing traffic flows in many parts of gridlocked central London: at Embankment and Blackfriars Bridge, bikes outnumber cars in rush hour. More proof that bike lanes are the most efficient way to get people round cities. (Another book stat: cycle lanes transport five times as many people per square metre of tarmac as roads.)

Cycle infrastructure design and practice has developed a lot in the last few years. Indeed, most of the book’s references are within the last decade. Denmark continues to innovate. Details of, say, junction design may seem nerdy, but they make for great improvement of experience. Even the Netherlands doesn’t rest on its laurels: they comprehensively updated and improved their infrastructure guidance in 2017, and are pioneering new concepts such as super-fast ‘cycle motorways’, such as the one between Arnhem and Nijmegen.

‘Cycleways’ is John’s preferred term, stressing the special requirements and benefits of two wheels – just as he prefers to talk about ‘cycles’ rather than ‘bikes’, to include all those trikes, cargo bikes, handcycles and so on.

He talks about the upcoming generation of engineers who, having worked on London’s recent Superhighways and Quietways, will hopefully avoid the mistakes of their predecessors. "Increasingly, there are lots of them, now in their 20s and 30s, with that experience, who just know how to do it properly."

A breath of fresh air

Another opportunity for better cycle infrastructure is urban clean air zones that will have to tackle our deteriorating air quality. "The Government have essentially said to local authorities, pollution is your problem! So we could see pollution charging coming in locally – perhaps on cars, perhaps on all motor transport.

"Along with the London Congestion Charge Area, which is set to expand in 2020, this can embolden local authorities. By addressing the air quality question, they can also make transport more sustainable, and increase flow. It can be a new lever against the internal combustion engine."

Inspired, I pick up my bike from the packed campus cycle sheds and head back along the signed route to central Bristol, past artistically graffitied underpasses, through defiantly vibrant multicultural neighbourhoods, and into the shiny new harbourside development. It’s better than nothing, but far from ideal.

Thanks to John’s book, I now know exactly why, and exactly what I should be lobbying for – widths, radiuses, materials, how much it’ll benefit the flow, how much money it might save. He’s a great believer in incremental changes: if we can’t get everything perfect right away, chip away steadily. Let’s start a few increments here.

A review of Designing for Cycle Traffic  will be in the Feb/March issue of Cycle magazine.

The book is available on Amazon.

Listen to an interview with John Parkin about book, (it's a 90 minute podcast by Carlton Reid).

Why should the Government update, improve and rationalise cycle design guidance? View

Why we should design roads for people, not vehicles View
Cycling UK continues to support the UK to cycle
This remains true during this difficult period with the ongoing threat of coronavirus Covid-19
Read our latest advice on cycling