Do not overtake cyclists: How changing one road sign helps keep cyclists safe

The offending sign is changed for a better one. Photos by Martin Porter.

Do not overtake cyclists: How changing one road sign helps keep cyclists safe

Campaigning to make cycling better where you live can feel like an uphill struggle, but Cycling UK campaigner Keir Gallagher explains how one email from a Cycling UK member made a busy road safer for cyclists.

It’s pretty clear to most cyclists that wide-ranging changes are needed throughout the country if we want to see more people riding their bikes as part of their everyday journeys. However, when it comes down to our day-to-day riding, it can be easy to lose sight of the simple things we can sometimes do to make cycling that little bit easier in our local area.

Most of us will be familiar with those minor annoyances which interrupt the peace, even if they don’t put us off cycling altogether; a segregated lane which vanishes, bike racks which can only secure your front wheel, mapping apps which unexpectedly detour us down muddy single-tracks.

These frustrations often have simple solutions, but they can be a real pain and also tend to reinforce the feeling that much of the world around us just doesn’t ‘get it’ when it comes to cycling – a feeling which is only entrenched further when inordinate amounts of energy sometimes have to be spent to try and get them resolved. It can be hard to believe the protracted battles that take place just to fix a single piece of sloppy infrastructure. 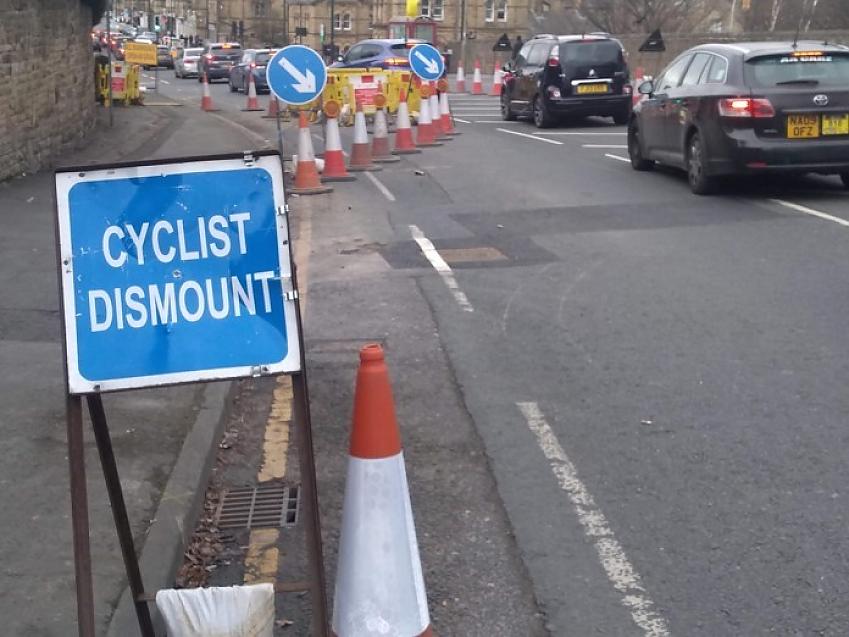 'Cyclist Dismount' signs at roadworks can be unhelpful, suggesting motorists have priority

In the face of such uphill struggles, it can be easy to give up hope and just grin and bear it. But it needn’t always be this way – as Cycling UK member Martin Bishop recently showed.

For Martin, it was a ‘Cyclist Dismount’ sign at a narrowing of the road – due to roadworks – that had, quite understandably, sparked his frustration. These signs are relatively common - I’m sure we’ve all seen them and grumbled to ourselves in response.

Beyond the inconvenience of having to get off and walk, the sign implies some concerning subtexts. For one, it suggests a hierarchy of road users which conflicts with all reasonable logic – that a narrowed carriageway should mean the narrowest of all vehicles – a bicycle – be prohibited. And, albeit unintentionally, it also subtly implies that it is a cyclist’s responsibility to make themselves safe from drivers, as opposed to a driver’s responsibility to ensure they don’t endanger cyclists.

An aggressive driver objected to [my friend's] presence on the road, gesturing towards the sign.

Worst of all, it seems to suggest that, on narrow roads, cyclists shouldn’t be holding drivers up by ‘taking the lane’ but should instead make way for the motorists around us, even if we have to get off and walk to do so.

Martin Bishop said “A friend posted on Facebook that an aggressive driver objected to his presence on the road, gesturing towards the sign”.

So, instead of grumbling, Martin decided to take action. Nothing radical, nothing confrontational, nothing too time-consuming - just a polite email to the relevant authority – Northern Gas – to highlight these problems and request the sign’s removal.

The response was – and all credit to Northern Gas – incredibly heartening. While the pessimists amongst us might have expected a response filled with road safety jargon and vague references to insurance and health and safety, Northern Gas were happy to listen to his concerns. They initially responded with an explanation of why the sign was in place (the narrow road), listened again to Martin’s point that cycles are generally narrower than motor vehicles and then, instead of agreeing to Martin’s suggestion of removing the sign, went even further and replaced it with one reading ‘Do Not Overtake Cyclists’. 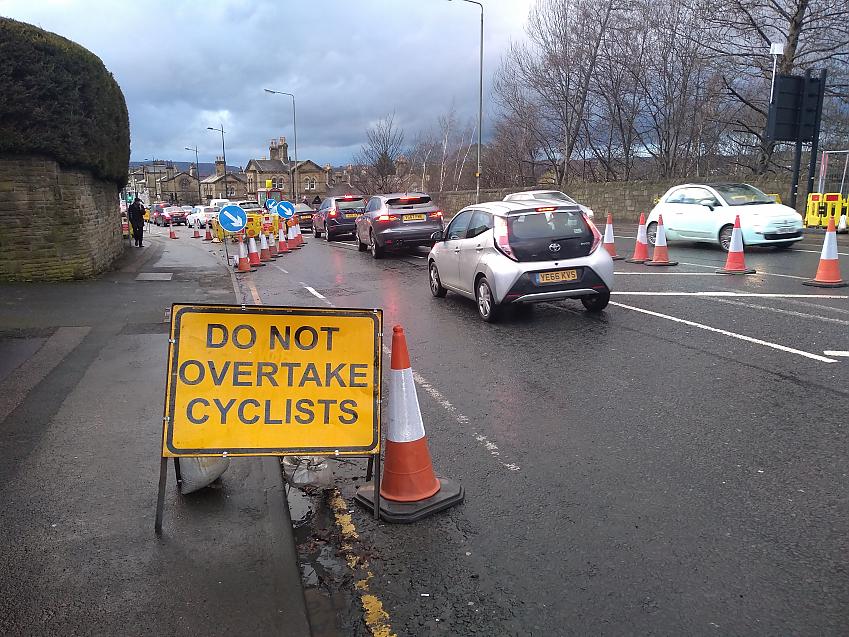 In the words of the local councillor who had been cc’d in to the exchange – “A great solution”. With just a few words changed and the overall aim of cyclists’ safety retained. All those subtle implications mentioned above are turned on their head; the onus is placed on drivers to ensure they don’t endanger cyclists, and a wider message is also communicated: that drivers should not try to overtake cyclists on any narrow road – roadworks or otherwise.

Just like that, with two short emails from Martin a solution was found, helping not just cyclists passing the works in question, but also sparking a change of approach from the relevant site manager that we can only hope will be replicated throughout Northern Gas’ network and beyond.

So, well done Martin and Northern Gas. For the rest of us, let’s be inspired, and remember that if enough of us take the time to try and improve the world around us, we can make a real difference, even if it might be just one little step amongst the many thousands needed to revolutionise our cycling culture altogether.

If you want to do more to help cyclists around you, then keep your eyes peeled for updates on Cycling UK's local campaigner network. The network is currently being reviewed and we'll soon be seeking new campaigners nationwide. You can also look on our groups page to find local campaigning groups in your area.