How and why does transport spending need to be rebalanced?

Who wouldn't want to invest in streets like this?

How and why does transport spending need to be rebalanced?

This article explains why Cycling UK wants to see a far greater proportion of overall transport spending made available for cycling, walking and safer streets. (This article covers England only).

How much does the Government invest in cycling and walking?

When the Department for Transport (DfT) published the Cycling and Walking Investment Strategy (CWIS, England) in 2017, it identified £1.2bn of funding over five years (2016-17 to 2020-21) that “may” be spent on cycling and walking.

Only £316m of this, however, was specifically earmarked by central government for investing in cycling and walking. The rest was expected to be allocated by local authorities (albeit from general funding streams that stem ultimately from central government).

With almost half of the above funding being short-term commitments,  the Government’s own annual investment in cycling and walking is, in effect, on the decline: from £95m in 2016/17 (amounting to £2.07 per person annually outside London) to just £33m in 2020/21 (just 72p per person).

This 65% reduction was in marked contrast to the £15.2bn allocated for capital spending on England’s motorways and trunk roads (the Strategic Road Network, SRN), via the Government’s first Roads Investment Strategy (RIS1).

Are cycling and walking a good investment?

Yes. A report published by the DfT recognises that cycling and walking has a “very good” average benefit to cost ratio (BCR).

They also help tackle all of the major costs of urban transport identified in the Cabinet Office's 2009 report 'The wider costs of transport in English urban areas'.

In essence, this report found that the economic costs of urban congestion, air pollution, physical inactivity and road casualties are all of a similar order of magnitude at around £10 billion each (in 2009 prices): 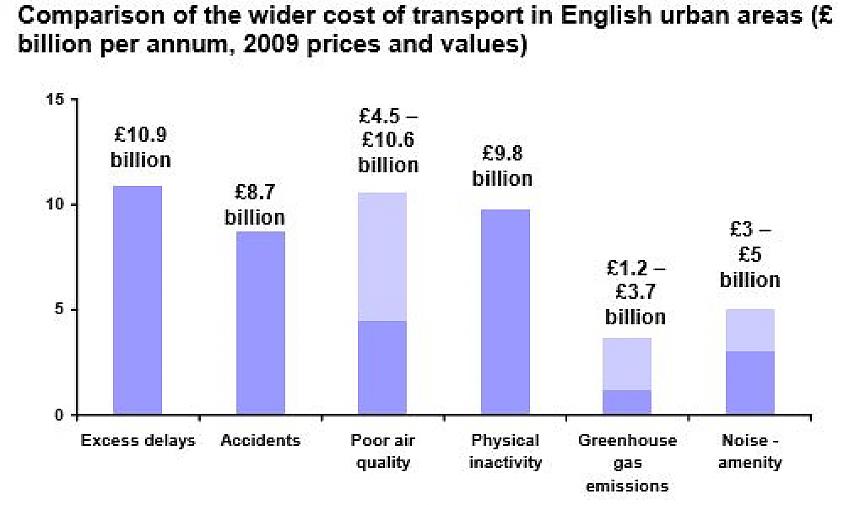 Investing in cycling and walking can help address all the above problems, as well as climate change, noise and other more localised adverse impacts of motor traffic, without presenting any significant downsides.

By contrast, motorway and trunk road investment might reduce congestion for inter-urban traffic at ‘bottleneck’ locations where investment is made, but is also likely to generate traffic overall, thereby exacerbating congestion, pollution and other adverse impacts elsewhere.

While these remote adverse impacts are not well understood and rarely monitored, a review of the Government’s Post Opening Performance Evaluation (POPE) reports on motorway and trunk road schemes found that road schemes:

How much should the Government spend on walking and cycling, and what would the return be?

Cycling UK believes that, if the Government genuinely wishes to see walking and cycling become the norm for short journeys, and to reduce the external costs of road traffic and motor vehicle dependence, it needs to significantly shift the balance of transport funding from inter-urban roads towards more local transport solutions that encourage active travel.

To achieve this, it recommended investing at least £10 per person annually on cycling, rising over time to £20.

The Government’s more modest target is to double cycling trips by 2025.

To find out how much these two targets would each generate, Cycling UK commissioned research from Leeds University (2015). This calculated that, in today’s money:

Sustrans later estimated (in 2016) that achieving the Government’s target to double cycle use over 10 years would require investment of £8bn over that period.

Yet the value of these estimates of required spending are gradually declining in real terms, due to inflation. Moreover, they only covered cycling, as they pre-dated calls for (and the adoption of) a Cycling and Walking Investment Strategy.

Given this, Cycling UK is urging the Government to raise cycling and walking investment to at least 5% of transport spending by 2021 (when its 2nd Roads Investment Strategy is due to start, and when we believe a new CWIS also needs to commence), rising to 10% over the next five years.

This policy adopts a precedent set by the City of Edinburgh Council, who committed in 2012 to allocate 5% of its transport funding to cycling, rising by 1% per year.

This ‘ramping-up’ policy reflects the fact that most councils would initially find it difficult to scale up their spending in a cost-effective manner. This is because they need time to recruit and train new staff, build up longer-term plans and consult on schemes, before such increased funding commitments could translate cost-effectively into higher levels of spending on the ground.

Ratio of capital to revenue

As well as substantially increasing the levels of funding for the CWIS, the Government also needs to achieve a healthy balance between capital and revenue funding.

The difference in the two types of funding is crucial: new cycling infrastructure (capital funded) can’t achieve substantial levels of use without behaviour change measures to accompany it (revenue funded).

Positive encouragement is especially important if new infrastructure is to attract groups that are currently under-represented in cycling, e.g. women, older people, people with health conditions or disabilities, and people from BME communities, to overcome the perception that cycling is “not for people like me.”

DfT-funded research into the optimal balance of capital and revenue funding for sustainable transport projects in general (though not cycling and/or walking specifically), suggests a capital-revenue balance of between 70-30 to 80-20.

Cycling UK recommends that the balance should start initially at around 70-30 in the early stages of a local cycling strategy, increasing to 80-20 as funding levels increase.

On the other hand, once capital projects start to come on stream (i.e. once the authority in question has recruited staff, developed a network plan and some priority schemes and consulted on them), its capital budget will need to go up both in absolute terms and as a proportion of the total budget for walking and cycling.

If you would like to see more funding for cycling and walking, then take action here!

What needs to be done to make sure that autonomous (‘driverless’) vehicles don’t put cyclists and pedestrians at risk? View

Why should more drivers who cause danger be banned? View
Cycling UK continues to support the UK to cycle
This remains true during this difficult period with the ongoing threat of coronavirus Covid-19
Read our latest advice on cycling
Join Cycling UK to help us change lives and communities through cycling
Membership gives you peace of mind insurance, discounts in cycle shops, rides & routes
Join now