Just how much can you carry by e-bike?

Just how much can you carry by e-bike?

Cargobikes can carry a lot more than a regular bike, but when you add on electric assist you can cycle with a load more. Cycling UK's e-bike expert Richard Peace has been investigating how much you can carry on a e-bike and a e-cargo bike.

E-bikes have the potential to revolutionise how much you can carry. It’s not just for the obvious reason that you have the help of an electric motor. There is also the fact that electric assist’s commercial success has spawned a great variety of e-cargobike designs, so most likely there is going to be a design for your particular requirements.

If you need to tackle hills with a heavy load electric power will make the virtually impossible not just practical but enjoyable.

Whether you have several small children you want to travel by e-bike with, desire to go off-road with all the gear for a mega camping adventure or need to carry very heavy and bulky loads daily, there is likely to be a design for you.

It’s worth bearing in mind some general tips for safe and enjoyable cargo carrying by e-bike before looking at particular options:

Is it illegal to carry ‘too much’ on an e-bike?

There are no legally prescribed weight limits for e-bikes but the European standard dictates the e-bike manual must state the permissible total payload (rider plus luggage) and the e-bike’s empty weight.
In practice I’ve found these very helpful but not the bottom line. Some e-bikes seem conservatively rated whilst others I would hesitate to put on the maximum payload. The bottom line if carrying heavy loads, especially for the first time or with a new e-bike or trailer, is to practice somewhere quiet to make sure you are happy with the setup and feel confident and in control.

Rear pannier racks are commonly rated at 20-30kg maximum carrying capacity (often stamped on them). A few e-bikes come with some kind of front rack, usually suitable for lighter loads. There is always the option of fitting a front pannier rack (virtually no e-bikes come fitted with them) but I find care is required if you don’t want to affect the bike steering and I rarely add more than 10kg here.

Add in a handlebar bag and you are looking at around 45-50kg maximum cargo load (in addition to the rider) with a full ‘touring’ setup on a typically ‘standard’ e-bike design.

E-bikes with centrally mounted batteries and crank motors will help to counter the weight of fully loaded panniers on front and rear. Batteries mounted at the top of a pannier rack will have the effect of making the bike ‘rear heavy’ and potentially harder to handle. If you have heavily loaded rear panniers some weight at the front in the form of a hub motor or front panniers can be a good thing to prevent steering becoming too light.

Again, trial and error in loading and riding is the key.

Trailer ratings vary but typical luggage trailers max out at about 40kg. Trailers are great for loads that aren’t extremely bulky or heavy and can also be a good option for carrying children. The options for taking children by bike is really a separate article in itself and the options are covered in Cycling UK's guide to child trailers and in Josie Dew’s article on cycle touring with children.

In short, trailers are probably the best option for most e-bikers once you’ve decided your load exceeds the capacity of your bike.

There are two wheel and single wheel trailers but I generally prefer a two-wheeler as the two wheels take more of the weight on the trailer and less on the bike’s rear axle. There is no legal weight limit to what can be pulled on a trailer and no obligation on trailer manufacturers to advise of a maximum advised weight, though many will.

But load on evermore weight and you will eventually destabilise the bike or trailer and risk an accident. Good common sense rules are to select a trailer with a strong and secure hitch that mounts to or around the axle area, keeping the ‘push-pull’ effect of a trailer’s weight low.

It’s not only maximum weight that is important for safe towing but loading correctly; this A to B article covers how to do it. It gives a good rule of thumb that half the weight of e-bike and rider is the limit for the total weight of the trailer and its load.

Clearly that varies for all rider/e-bike combos but I’ve found around 45kg to be a sensible limit for my 68kg frame and the typical 25kg e-bikes I ride when using a good quality trailer. With a fully loaded e-bike and trailer cargo loads approaching 80kg are possible for experienced riders.

There are many different types of cycle trailers available. 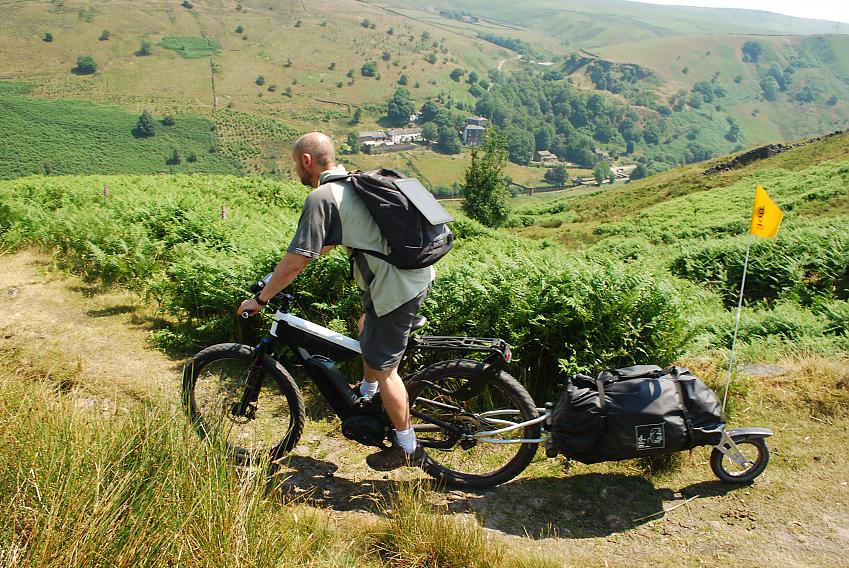 If you are regularly carrying single large items or larger children (or even adults) then a specific load carrying bike might come into its own and two types of e-bike design have emerged as the most popular. These won’t necessarily carry a lot more weight than a strong e-bike plus trailer but they can be much more convenient for carrying bulky loads and children regularly. 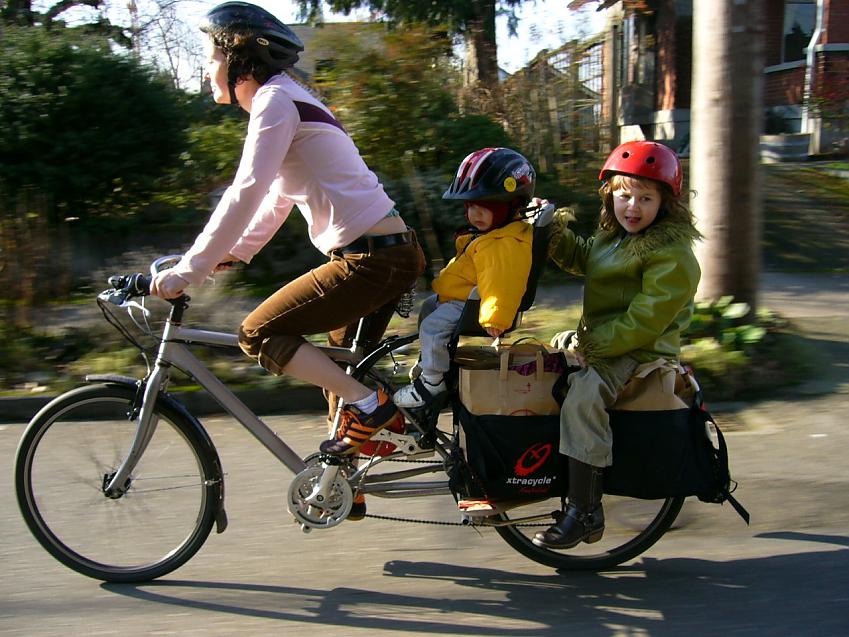 The ‘longtail’ design is increasingly popular as it avoids the bulkiness of other e-cargo designs but lets you fit more on the rear of the bike.

A couple of the most versatile longtails are: 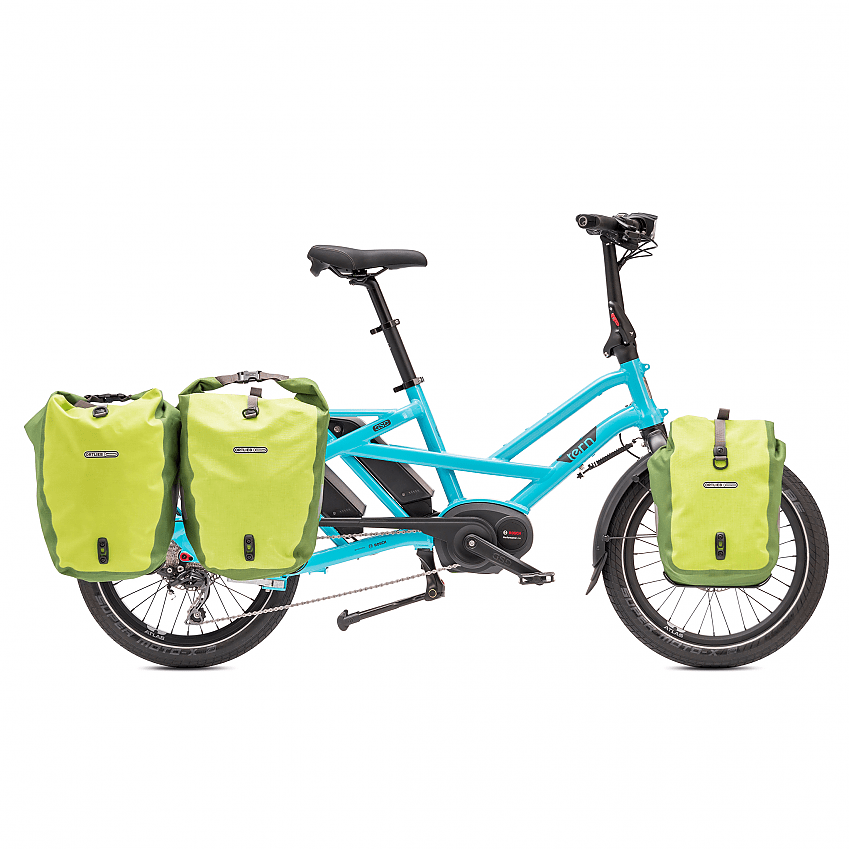 The bakfiets design (from the Dutch for ‘box bike’) allows you to put a large amount of gear in a large frontal loading area – often a box. This keeps weight low down and central leading to some impressive payload stats, as examples show:
Riese and Muller’s Load 75 has a gross 200kg rating including rider and is designed to accommodate up to three small children and it’s full suspension means some off-road ability.

Urban Arrow’s Cargo range go up to massive XXL model with a gross cargo plus rider payload of 275kg – I’ve never ridden with this much in an e-cargo bike so I can’t pass opinion just what it might feel like. 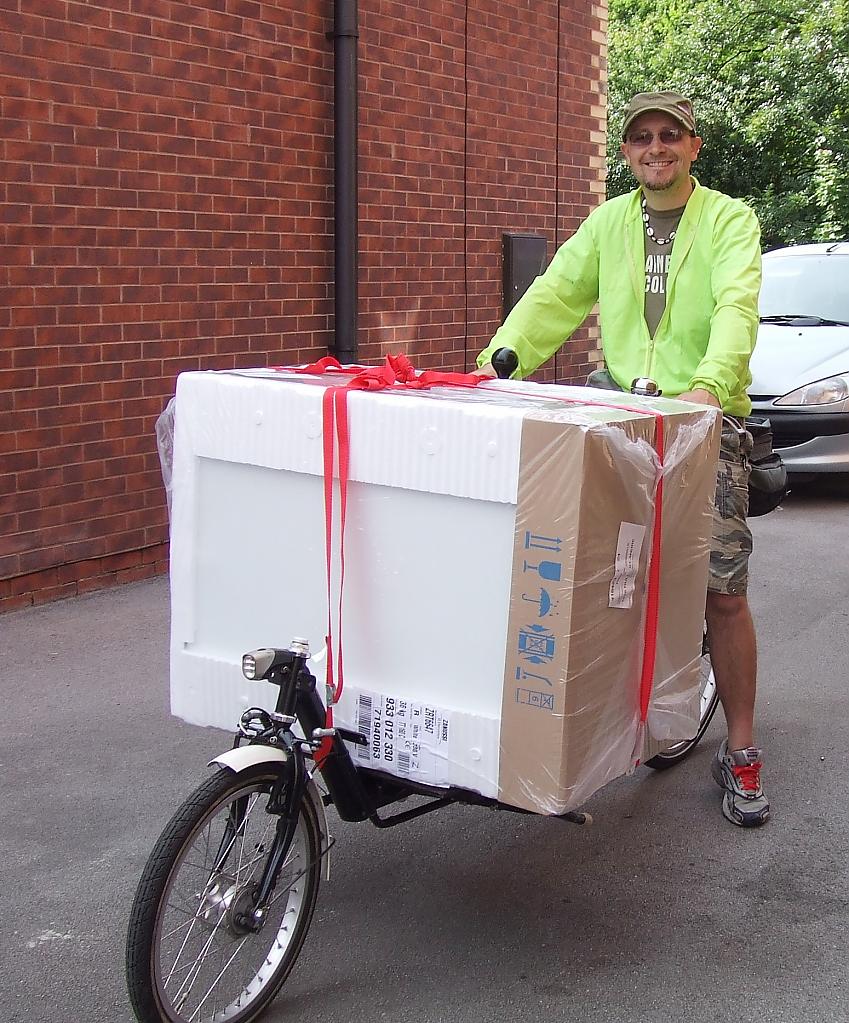 Bakfiets are great for bulky loads. Photo by Andrew Jackson.

I have ridden an electric bakfiets style bike with 110kg load in the box and felt that was as much as I wanted to put in without affecting handling – but as I’ve said before max safe weight varies from bike to bike. For bakfiets riding tips see here and for more on cargobike design see here.

For regularly hauling over 80-100kg an electric cargo trike is an option, though certainly not cheap.

Construction strength takes a step up and three wheels provide a more stable platform for heavier loads. Some consumer orientated e-trikes aren’t built to handle that much more than bakfiets style bikes but they give riders a choice of whether they prefer riding with two-wheels or three wheels and each have their pros and cons.

However, more commercial e-trikes can handle seriously large loads. Urban Arrow’s Tender series are rated at 300kg with the ability to put Europallets on the front and they use automotive type components in some areas of their construction.

Do be aware riding a trike is a totally different skill to riding a bike – no harder but something you must practice before investing in an expensive e-trike! 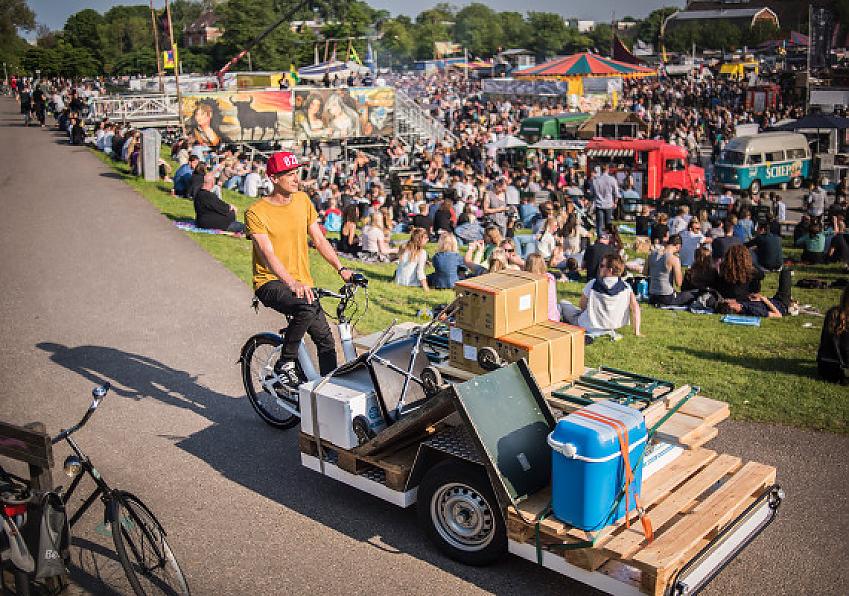 A guide to cargobikes View