As part of Lee Craigie's training ahead of The Tour Divide, she took part in the Mallorca 312, an iconic sportive on an island long associated with road cycling.

I’m weaving a bit. I've stopped sweating (a bad sign) and I'm concentrating very hard on not being sick. I am out of energy. Have been for the last 50 km but I can't fit anything in there. I've been riding on my own for ages and I've entered a dream like state now where I can't actually gauge the speed I'm travelling at any longer. I suspect it's quite slow. I'm only 40km from the end of the Mallorca 312 but it might as well be a lap of the planet. I'm totally and utterly done.

The Mallorca 312 is an iconic sportive on an island long associated with road cycling. Due to its popularity, the original route (which consisted of one full a lap of the islands perimeter) has since been replaced by a figure of eight variation. Because thousands of people now assemble to ride the 312km route every May, the roads must be closed to traffic and the route redirected around Palma so that the island doesn't grind to a halt. This means that at the point you are likely to be suffering the most, you are nearly back at your hotel and have to tear yourself away again for 120km of round two.

Riding it had been on my mind for a while but this year, because I'm trying to condition myself for a 2750-mile bike ride this summer (The Tour Divide). I thought that this would be a good test of my base level fitness. It was that at least.

It's 5am and I'm in the hotel breakfast buffet trying to convince my stomach it's not still the middle of the night. It reminds me of my professional racing days; on autopilot, one eye still closed with sleep, a vague sense of impending doom hovering about. I pick up my borrowed bike from the hotel bike room (Mallorca is cool) and roll through the still dark streets towards the mass start in Alcudia.

I'm nervous but I don't know why. It's just a big bike ride in a beautiful place. There’s no pressure to perform or get a result and then it hits me. It's a really, really long way.

I battle through hundreds of ashen faced, Lycra clad roadies who have all had similar breakfasting struggles by the looks of things. I find my way onto the start line and tuck in behind the unmistakable form of Miguel Indurain. I might be cold and scared and suffering indigestion but at least I'm in the company of greatness. 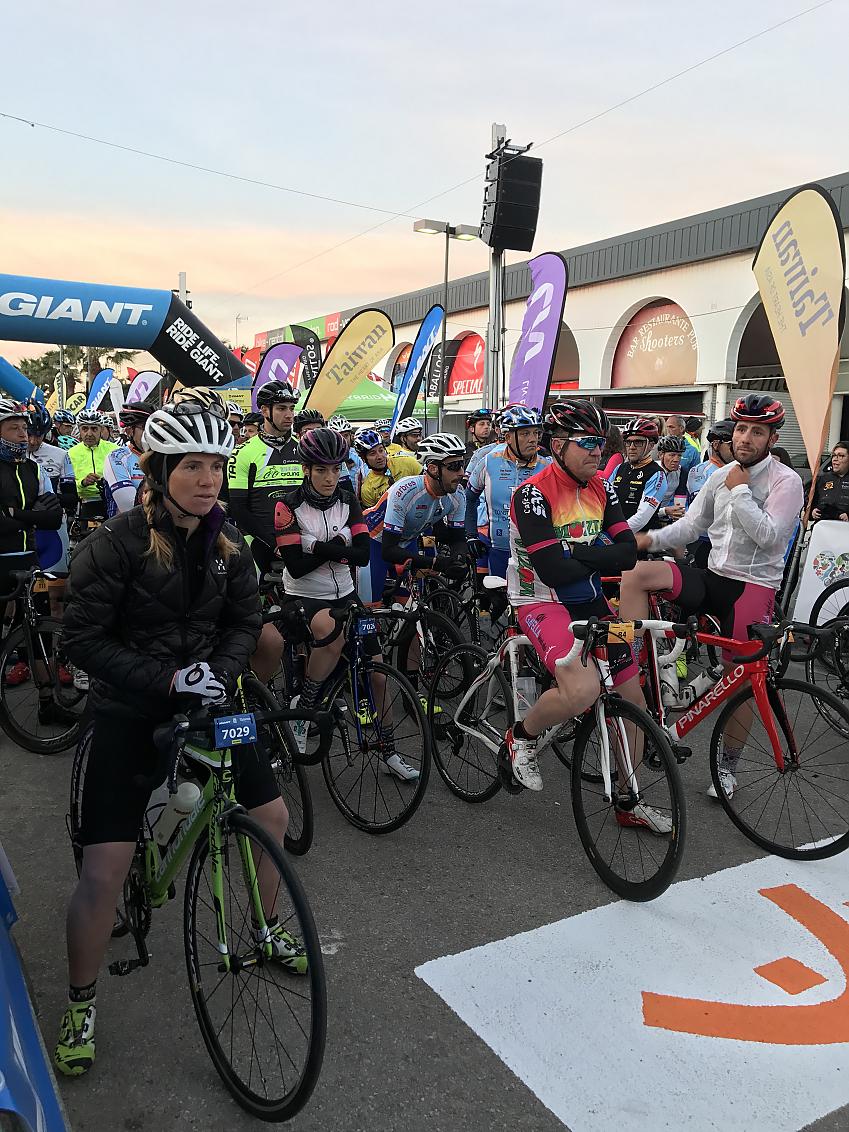 Lee Craigie at the start of the Mallorca 312

As the sun rises over the Mediterranean and eases the temperature on the start line up to lukewarm, thousands of riders roll gently west in the biggest peloton I've ever been part of to begin the morning’s first challenge- the hilly western coastline.

I make my first mistake. With the words of advice I've given to others testing themselves in an endurance event ringing in my ears (“you're only going to get slower so don't start too slow”) I gently ramp up my speed until I'm at the front of the ride with the lead woman. This is ok. What's not ok is that I determine to stay with her as her slight little form dances all over the 18% gradients. But this section of the route is so hard to not enjoy even with screaming legs and hammering heart. A ribbon of perfect tarmac weaves through bright white limestone formations, dropping down occasionally through startlingly green foliage and punctuated every now and again by flashes of fictitious cobalt sea. Descending these incredible roads that have been closed to traffic is an enormous amount of fun and definitely has something to do with my childish inability to keep my excitement from spilling over into recklessness.

By the time I reach the south of the island, the sun is fully up and leaving its salty repercussions all over my shorts, top and eyebrows. My bum hurts and my legs and lungs feel alarmingly well worked already. I glance down at the route profile I've sellotaped to my top tube. I've completed a third of the distance and in my head an annoying little voice tells me I could quite happily call it a day.

I eat a potato and some Haribo and dig about for my second wind. I know it must be here somewhere.

On the return route north I get caught by a bunch of fast guys all keen to work together. For a while it's great, I take my turn at the front and we all whip along at a steady 25 miles an hour through orange orchards, fields of lavender, white washed pueblos and patches of enticing smelling shady eucalyptus trees. I can still see the lead woman flitting in and out of riders up ahead. She looks strong and determined, two aspects of my riding that are definitely on the wane.

It happens suddenly. No real warning but in retrospect it was obvious. I'd spent all morning moving through the high mountains at a speed slightly too fast for me and now, in the early afternoon, I found myself embroiled in an engine of fast moving men. My entire body judders to a halt. It isn't my legs or my lungs specifically and I am still moving forward only now every pedal stroke has become an effort and I have slowed so much that my new found team has to leave me behind.

As the balmy afternoon wears on, and normal people all over the island are packing up their beach towels and heading for waterside cafes, I get passed by rider after rider. I try to raise my speed and get on their wheels but after a maximum of four pedal revolutions, I realise it's futile. I'm riding this in alone.

On reaching the torturous point near Pollenca where the route splits and sends riders completing the shorter, more sensible 260 km route home, I summon all my self-discipline and swing east for the final lap on the route. I have 120km to ride to Arta and back. I don't know if I can do this. My stomach is rebelling. I'm bonking but I can't eat. I'm trying so hard not to be sick that it's taking up most of my remaining energy. Why am I doing this again?

At 3pm I fish around in my pockets looking for the vial of liquid peppermint caffeine I pocketed for emergencies. If this isn't an emergency then I don't know what is. It works enough to get me through the wiggling lanes to Arta where the town has gone all out with festivities and it becomes clear that while I've been riding, everyone here has been drinking. I stop for the first time that day and stand swaying in the pit stop watching young guys drinking beer on donkeys and listen vacantly to some very bad collective karaoke. I drink a can of coke and inhale a white bread Nutella sandwich then crawl out of the animated town again alone.

Then just as quickly and surprisingly as this fog descended, it lifts again. A group of riders pass me and I respond, jumping onto the back of their little group as if my life depended on it. I surf their slipstream for a while until I am sure my recovery isn't a Nutella fuelled flash in the pan and when I realise I’m able to keep the pace, I work my way into the pack. Colours start to return to my vision and I find I can even say a few words. My legs are responding to my commands once more and I take a moment to appreciate the balmy late afternoon air as it ripples through my shirt and gently bathes my sensitive skin. We catch others and gently ramp up our collective speed until we arrive back in Alcudia after 11 hours of solid riding.

I sit down in the gutter and drink a beer someone has handed to me. I'm still there 30 minutes later when my friends find me. They have just finished the 130km route (one of them on a hand bike!) and have ended their day at roughly the same time as me. We are all pretty broken. We're too tired and dehydrated to show much elation but somewhere in there relief and pride are bubbling away.  That was a 312km day with more than 5000m of climbing. I must have kept an average speed of just under 30kmph through some pretty dark times. Everything hurts. I probably look a little haunted. Already it feels worth it.

Lee Craigie is a former national mountain bike champion and a director of the Adventure Syndicate, which is affiliated to Cycling UK. 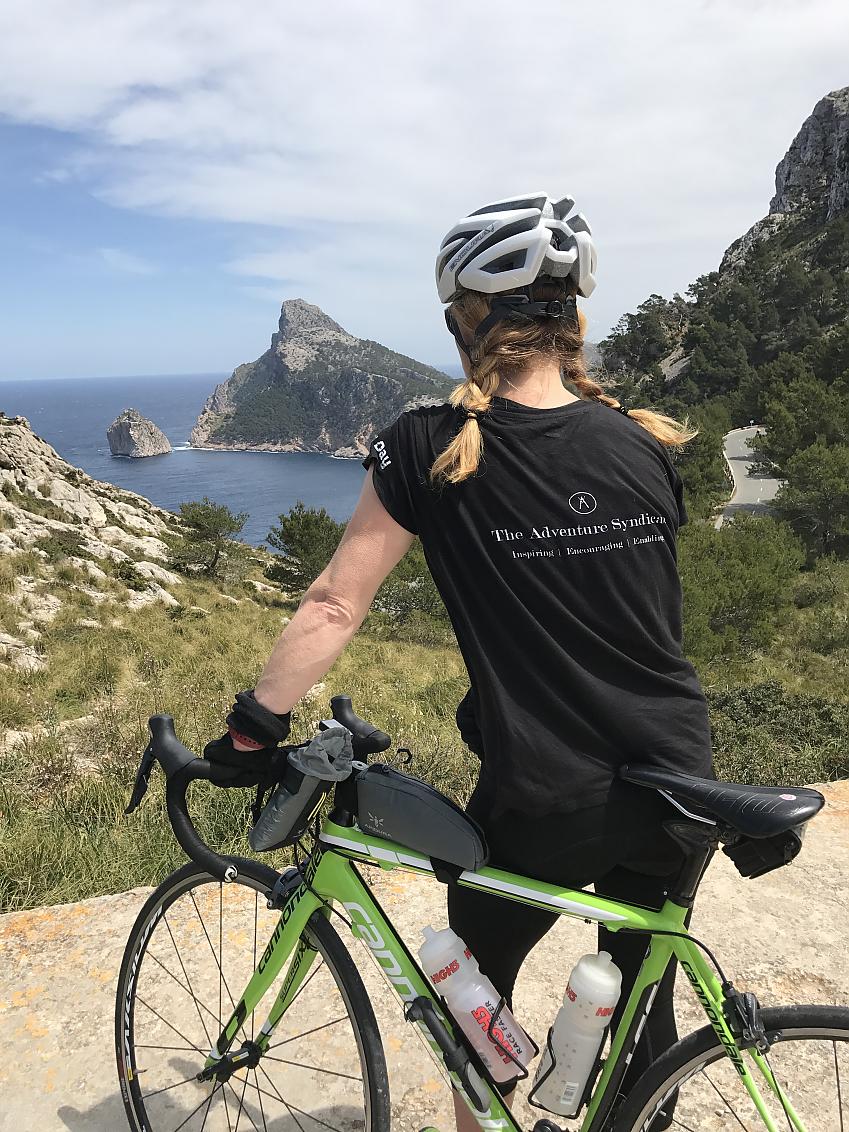 Distance: 312km (although there are shorter variations)

Conditions: I was lucky. It was warm and dry but temperature varied as expected in the mountain section. Enormous mass start.

Accommodation: I was a guest at Hotel Viva Blue in Alcudia, arguably the biggest and best hotel set up on the island for bikers. (Their sister hotel at Cala Mesquida a well kept secret and surrounded by excellent mountain biking).

Equipment used: I really missed my own handbuilt Shand on this ride but the quality of hire bikes through the Viva Hotel chain means hiring a carbon road bike is the easy and sensible solution. It's so nice just to travel with hand luggage!

Maps/guides: None required. The route is so well marshalled and their are a gazillion other riders about that you'd be hard pushed to go wrong. They give you a profile card which is helpful though. I sellotaped it to my top tube so I could see what was coming up next.

I’m glad I had… A caffeine energy gel for emergencies. When my stomach stopped working, I needed this to get to the next food station.

Next time I would…Take it easier in the mountains in the morning and have more energy later in the day. I'd also have been able to eat and drink more regularly if I hadn't gone out so hard. Or do it over two days and stop at the beach!

Enter early. It's a popular event and sells out fast. Alternatively, download the GPX file atttached to this page do it yourself at a different time of year. I recommend entering the event though. The buzz around the island especially at the feed stations is really worth getting up early to experience.