Give your cyclist a book for Christmas

Give your cyclist a book for Christmas

Say a very merry Christmas to your favourite cyclist (or cyclists!) with a book that celebrates what they love most about cycling.

Don't worry, this isn't an exhaustive list of cycling guides and complicated how-to manuals for bike mechanics (but if you'd like that, let us know in the comments!) This is a top ten list of our favourite reads from throughout the year - a mix of inspirational travel guides, fun travel writing and biographical collections, complete with reviews to help you make a resoundingly successful decision.

There's something for everyone in the list below. Maybe more than just one something - of course, it's up to you as to how much you want to spoil the cyclist(s) in your life.

1. The Cycling Cartoonist by Dave Walker

A perfect stocking filler for any club cyclist

You might have seen Dave Walker’s wry cartoons in Cycle on our social media feeds. This is the book of all 138 of them. What makes the simple black and white line drawings work is that they ring true. They’ve clearly emerged from the mind of a club cyclist. So you get cartoons titled ‘Training Advice, wisdom gained by reading several magazine articles,’ ‘Levels of Fury with a bike you can’t fix’, ‘The Sunday Club Run, sorry I couldn't make it’, and so on. It might not make you laugh out loud, but it should make you smile.

An inspirational and memorable book for the cyclist who loves biographies

Reading this book is like going to a star-studded networking event to meet cycling celebrity after cycling celebrity in rapid succession: inventors, Grand Tour masters, women pioneers, record breakers, and people who’ve overcome barriers to ride, and more. Each individual only has a few pages devoted to them, but almost all of them stick in the mind – Alfonsina Strada, for example, an Italian farmer’s daughter who battled through the 1924 Giro d’Italia, some of it with a broomstick for a handlebar after hers snapped! It’s an excellent book. 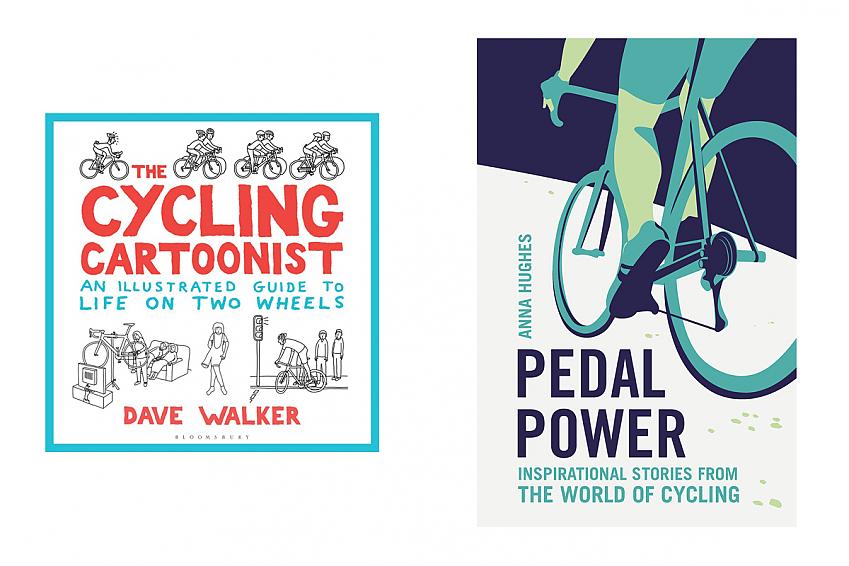 3. Spain to Norway on a Bike Called Reggie by Andrew P Sykes

A travelogue perfect for those who love to laugh and learn at the same time.

This is the third volume of Andrew Sykes’ series of books about his and Reggie the Ridgeback’s tours around Europe, and it is every bit as entertaining and enjoyable as the first two. Making the trip from Europe’s geographical south to its most northern point over three months, Andrew recounts his exploits in his usual witty but informative style. Intermingled with descriptions of landscape, people and architecture are snippets of history, culture and geography. It's perfect for the armchair traveller.

Recommended for those who like the facts at their fingertips

Does suspension make a significant difference to efficiency? What happens to energy during braking? What is the environmental impact of cycling? These questions and many more each get a double-page spread of clear text and three colour infographics in Max Glaskin’s book. It’s not as in-depth as Whitt and Wilson’s scholarly Bicycling Science, but it’s far more accessible. So read this one first. Like Bicycle Design by Mike Burrows, it’s a technology book that any cyclist can enjoy. 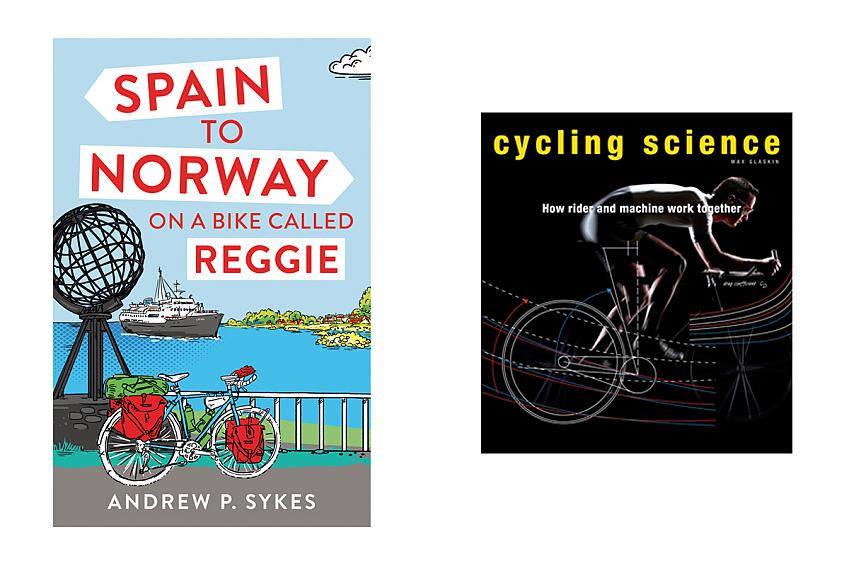 An inspiring and encouraging read for anyone living in the UK

Peter Walker is the Guardian journalist who set up its Bike Blog back in 2009. Bike Nation does read like an extended version of one of his blogs, but it has the bonus that it comes without comments added by anti-cycling trolls. Bike Nation is a balance of facts, statistics, research and interviews with experts, illuminated by Peter’s own cycling experiences. Although it’s from the perspective of cycling in the UK, it looks at how Denmark and Holland achieved higher levels of cycling and, unlike many other books about cycling, weaves in stories from countries around the world. Bike Nation examines the barriers to cycling in the UK without patronising the reader. It tackles controversial subjects like cycle helmets and why cyclists are hated. Both sides of the arguments are clearly examined and Peter’s own personal biases are openly discussed. What Bike Nation achieves in around 200 pages is to succinctly pull together the evidence to show that cycling is a magic pill to improve health, air pollution, society and road safety. The majority of the book unpicks the societal reasons for doing more to encourage cycling. Peter also paints a passionate and inspirational argument for every individual. ‘At the risk of sounding borderline messianic,’ he writes, ‘cycling makes your life better.’ This is not just a book for cycle campaigners. It will help everyone who cycles to understand how they are part of something that has the potential to change our nation for the better.

6. Cycling the Hebridean Way by the Offcomers

Recommended for the adventure traveller with an interest in history

Officially opened last year as NCN Route 780, the 180-mile Hebridean Way runs along the Western Isles from Vatersay in the south to Lewis in the north. Offcomers’ guide does all the usual things well, with clear route maps and information about accommodation and cake stops. The extra detail on the history, culture, and landscape of the places you visit makes it more than a route guide: it’s a window into a unique corner of the UK.

Review by Duncan Dollimore, Head of Campaigns and Advocacy at Cycling UK 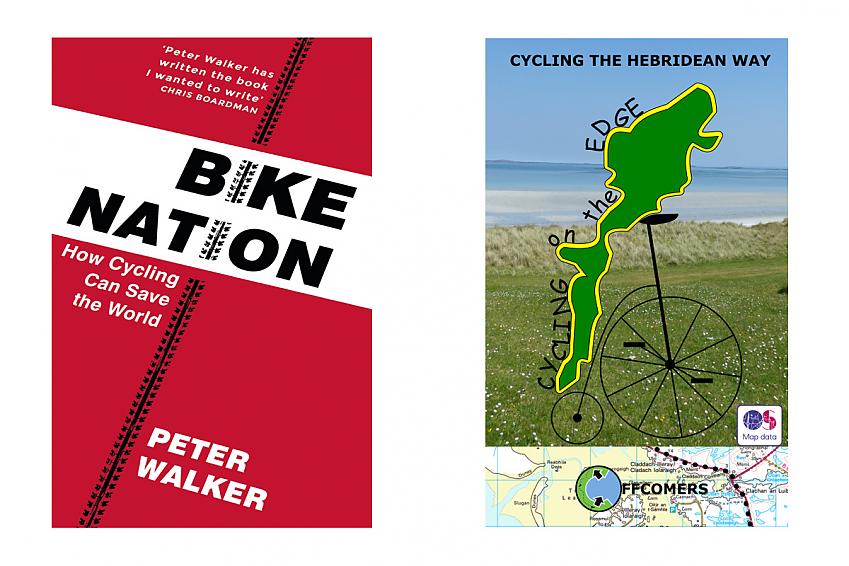 7. Re: Cyclists, 200 Years on Two Wheels by Michael Hutchinson

For the historian and cyclist in your life

Few writers can do what bike racer and journalist Michael Hutchinson does in this book. I’m a cycle commuter who sometimes rides slowly through the countryside and likes campaigning. But now, thanks to ‘Dr Hutch’, I’ve managed to internalise 200 years of cycling in its myriad manifestations, and feel like a pro in all fields. I’ve struggled through forests on a log on wheels, panic-flung myself from a penny-farthing, and both paced and raced in the petrifying scrum of early track races. This is such an absorbing, human-to-human history of our relationship with cycles, cyclists and cycling. Reading about Lady Harberton was especially revealing. I’ve always admired her CTC-backed fight for women’s rational dress. But never before has this splendid ‘career troublemaker’ of a woman come so powerfully to life for me. And that’s just a tiny glimpse into two whole centuries of revelation. The decades fly by in Mr Hutchinson’s company as cycling turns from extreme sport, posh (and most peculiar) craze, normalised pastime and, eventually, to the multifaceted thing it is today. Reading this is like listening to a funny, mesmerising storyteller who loves cycling as much as you do.

Perfect for the traveller who’s forever planning their next adventure

This hardback coffee table book provides a bucket list of 50 routes in 30 countries, describing each over two or three pages with stunning photography. It’s designed more to inspire than guide; the maps are rough sketches. Practically, it breaks routes into Easy, Harder and Epic. There’s something for everyone, from mountain biking in Moab, meandering through paddy fields in Vietnam, Bavarian beer routes (on my to do list), riding through Australia’s Queensland forests, to just pootling along the Loire Valley. I dare you not to be inspired to plan your next adventure. 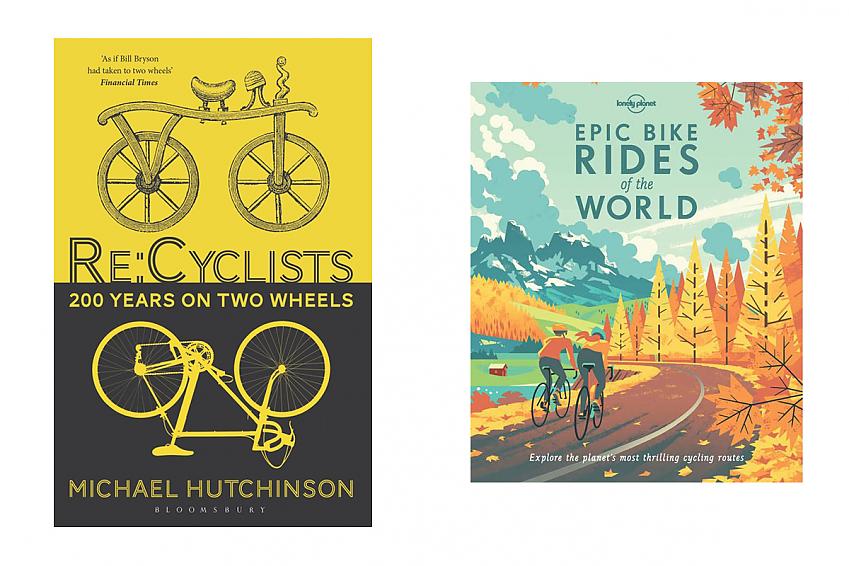 A poignant piece of travel writing for the cycle tourist

Probably the first book to have mentioned Cycling UK after our name change, Rides of Passage charts two tours across France from the Channel to the Mediterranean by cycle journalist Matt and his father Arthur. The rides are the same(ish) route, but split by 21 years. They present a heart-warming account of a father and son reconnecting as they relive their youthful adventures and reminisce on the years between. Despite the difficulties of French working hours and painful injuries due to a brand new Brooks saddle, it’s a romp of a ride and read. Most readers will readily identify with at least some aspects of the journey.

Cycling from Land's End to John o' Groats (LEJOG) - the entire length of the UK - is a challenge that many thousands of people take on each year. Whether it's for your chosen charity or a personal ambition, our LEJOG pack will help plan and complete this classic ride. We’ve outlined four detailed routes both on and off-road with useful tips on transporting bikes to and from various destinations, accommodation details for the journey and more. It’s the definitive guide – benefiting from all the tips and experience of Cycling UK’s 68,000 membership and 140 years’ worth of history – and a must for anyone planning the ride. 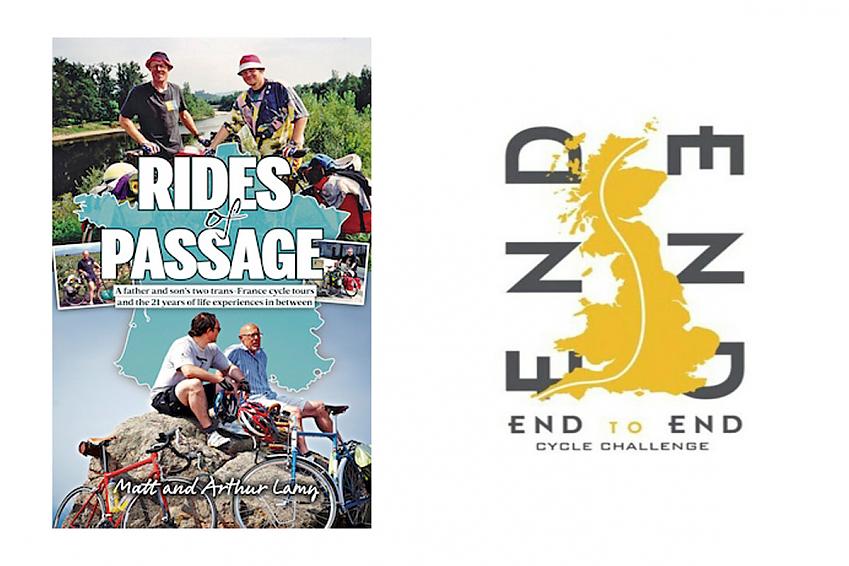 And here's a couple extra, as a Christmas treat!

A great choice for anyone with an interest in road cycling

The story of Tom Simpson’s life is one many people think they know, because they’ve read how the final chapter unfolded on the barren slopes of Mont Ventoux. Thankfully, Andy McGrath’s book focuses upon the Crazy Englishman’s charisma, dreams and determination, with the circumstances of his death the epilogue and not the central theme. This enables McGrath to capture the complexities of Simpson’ character and the contradictions of his incredible achievements and tragic demise. Beautifully written, but also brimming with evocative photographs which tell their own tale of adventure, passion and perhaps ultimately obsession. It’s not hard to see why Bird On The Wire has just won the 2017 William Hill sports book of the year award. On a more light-hearted note, look at the pictures of Major Tom when he’s playing to the camera. Then imagine Sir Bradley Wiggins, who wrote the foreword, in similar pose. The resemblance and mannerisms are uncanny!

Review by Duncan Dollimore, Head of Campaigns and Advocacy at Cycling UK 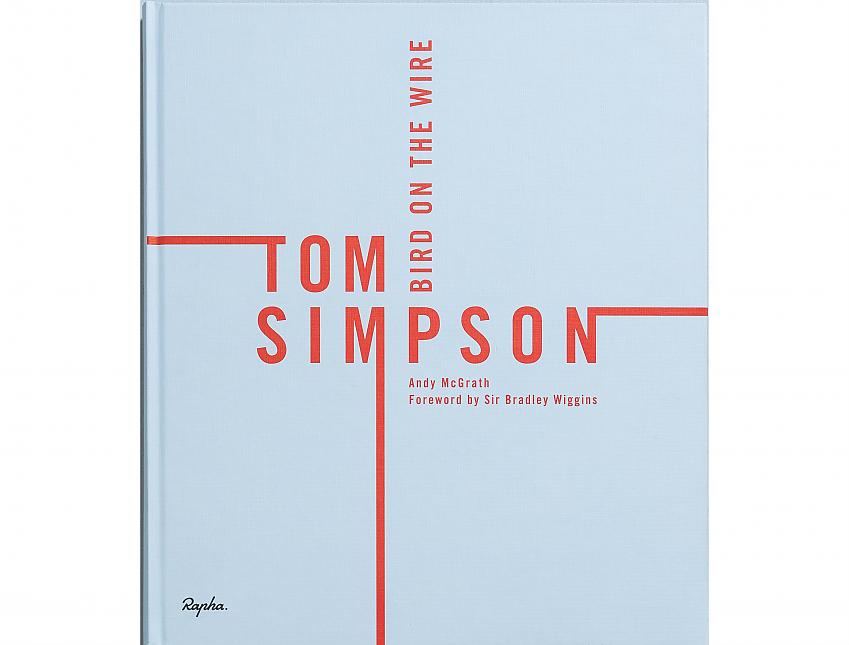 Carlton Reid has been writing interesting stuff for a long time now, but mostly for the cycle trade. This and the earlier book (Roads Were Not Built For Cars) are more mainstream, and suggest that Carlton could end up filling the gap left by the passing away of Richard Ballantine. But, as of yet, not mention of how to kill dogs! I have to start this review by breaking with convention to tell that the ending is not a happy one. As this is the second of a trilogy, the third should feature the light at the end of the tunnel. This one is mostly about the tunnel. The title is a little misleading, as the book's main focus is the ongoing battle for and against the 'cyclepath' or 'fietspad' approach: comparing the UK and USA with the Netherlands. Having spent seven years working for Giant, whose European headquarters is in Lelystad, the most cycle provisioned town in a cycling land, this is something I have experienced first hand. Until I read this book, I had not given much thought to it, other than thinking that fietspads are 'obviously' better. But I am now thinking: are they? Would I want to swap my informal wanderings around the lanes of Norfolk for the, by necessity, rather more regimented approach used across the water? The book is completely neutral and sets out the full history of all three countries' progress (or lack of!). This is not a very obvious book - no lycra-clad heroes or shiny bikes - but if you think of yourself as a 'cyclist', it is one you should be reading, if only to prepare yourself for the third one. 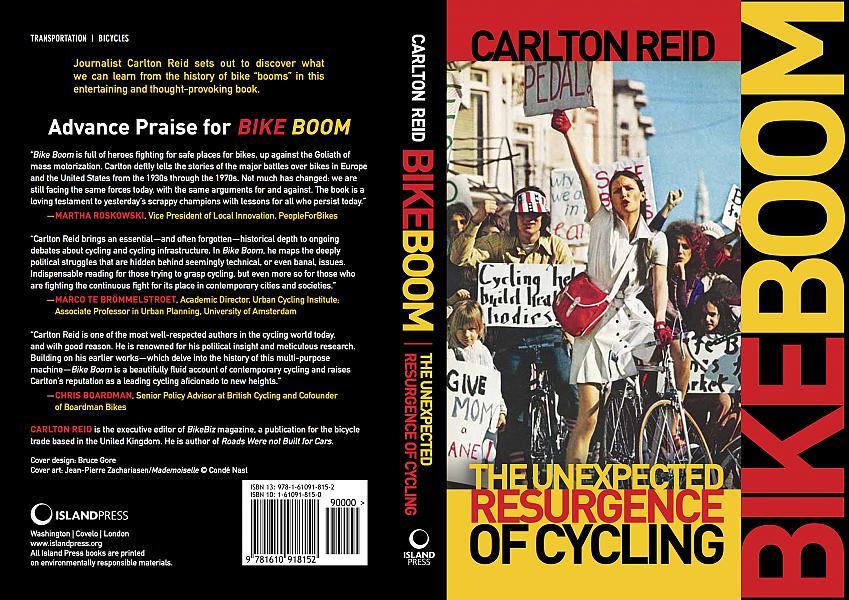 Definitely also consider our Gift Membership for the hard to buy for. It's only £45 for an adult membership for a full 12 months, plus a complimentary pair of Lezyne bike lights - it's the gift that keeps on giving! Click on the tile below for more information.

What's your favourite cycling book? Let us know in the comments box below.

Beat the Monday blues with these inspiring reads View