An expensive new pedelec isn’t the only way to get extra energy for cycling. Technical editor of Cycle magazine Richard Hallett tries out a Panda M-Drive conversion kit.

Electrically-assisted pedalling is popular right now, with e-bike sales in the UK growing at an ever-increasing rate as more and more cyclists of all abilities find reasons to buy one. The best of them, however, are not inexpensive and, as I found in Cycle August/September 2015 with examples from Giant and Cube, there are aspects of even the most accomplished examples – such as basic geometry – that could be improved on.

The obvious way around both issues is to opt for one of the kits available designed to be bolted on to a standard cycle.

There are various ways to convert a regular bike. You can fit a ‘powered wheel’, which comprises a wheel (rear or, more usually, front) with a motor, and sometimes also a battery, integrated into the hub. You can add some sort of friction drive connecting a motor to the rear tyre. Or you can fit a ‘mid-drive’ unit, which sits at the bottom bracket.

The powered front wheel has the advantage of being easy to fit, provided it is compatible with the fork and front brake. There’s an increase in rotating weight, which will affect handling. There’s no provision for variable gearing to cope with steep hills, and a hub with integral battery will be more limited in range.

Friction drive systems are quick and easy to fit but tend to suffer from limited range and lessened efficiency. The mid-drive arrangement is, of course, what is found on many purpose-built electrically-assisted cycles. It’s a good place to put the motor, keeping the weight low and centrally placed and allowing the drive to operate through a regular geared transmission.

The Panda M-Drive system on test here is a good example of the type. It comprises: a one-piece, self-contained drive unit with its own cranks and chainwheel that is installed in the bottom bracket shell (taking the place of the existing crankset); an LCD control and display unit; a wheel sensor; and a battery.

The M-Drive is also supplied with flat-handlebar brake levers compatible with full-length linear-pull brakes (i.e. V-brakes), each incorporating a cut-off switch that kills the motor when the brake is applied. Price is £350 for the e-bike kit, plus another £350 for the battery that we chose – a ‘Dolphin’ 13Ah down tube battery. You buy online from www.pandaebikes.com and can either fit the kit yourself or pay £150 to have it fitted for you by a Panda dealer.

A close look at the M-Drive unit reveals it to be a sturdy piece of kit with offset motor and drive sections. The latter is coaxial, with the square-taper bottom bracket axle able to rotate backwards independently of the drive plate, which is fitted with five threaded holes for the chainwheel screws. The axle rotates in sealed bearings housed in a steel sleeve with an external thread at the non-drive end.

Clear fitting instructions are available online and make installation relatively straightforward. Some pre-assembly is required. The chainring has to be screwed (with the chainguard if desired) to the drive disc using hex screws provided. With the existing crankset and bottom bracket assembly removed, the unit can then be offered up to a 68mm wide, 33.5mm internal diameter bottom bracket shell. If the shell is unsullied by protruding seat or down tube ends, the unit will slide in from the gear side. Otherwise, the tubing ends must be ground off first in order for the bottom bracket axle sleeve to go through.

On the non-drive side, the sleeve is located by a plate that is screwed to the unit at one end and clamped up against the face of the shell by a hefty castellated nut at the other. The plate has small radial ridges designed to prevent the unit from rotating under drive torque. A second splined nut, compatible with a Shimano Hollowtech II bearing socket, covers the first to improve appearance. The square taper cranks can then be fitted.

Before installing the locating plate, it is worth considering cable routing. I went for a down tube mounted battery (to be purchased separately; other capacities available) rather than the rear rack-mounted alternative. The battery is detachable and lockable, and its mounting plate attaches to regular bottle cage bosses. A wire comes off for the power supply. I fed this, along with the three lengths of wiring coming off the motor unit, underneath the bottom bracket shell and inside the plate for a neat look and to minimise the possibility of snagging.

One of the motor wires goes to a speed sensor mounted on the non-drive chain stay. This is vital for the system’s road legality (see ‘E-bikes and the law’). If you get electrical assistance at anything over about 15mph, you’ll be breaking the law unless the bike complies with motorcycle regulation and you are insured and wear a suitable helmet.

Another length of wiring leads to the LCD control unit and has connectors for the two brake levers and a ‘throttle’ (intended for off-road use; I didn’t fit this). The third connects the motor and battery and therefore carries the power supply at up to 14 amps. It uses push-fit connectors shielded by plastic sleeves.

One fell off its wire as I tried to make the connection, while the other’s female connector was too large and needed squeezing before it would securely hold its partner. It was easy enough to get a working connection for test purposes, but I’d make a better job for long-term use and would like to see something more reliable used in the first place.

The one-way plugs used elsewhere on the loom make wiring up the LCD unit a formality, although there’s plenty of excess, which I wrapped around the handlebar.

Getting it ready to ride

The instructions supplied for the LCD display are comprehensive but require interpretation and repay close inspection. Turning it on is easy enough using the separate button pad, and most of the readouts are labelled for easy comprehension, but there’s a wealth of diagnostic information available if you know where to look, from backlight brightness to ‘Power Magnet Steel Number’.

On start-up, the top left readout showed the battery to have been supplied three-fifths charged. The odometer and speed functions are readily understood. ‘PAS’ is power assistance, and it scrolls through Economical, Standard, Intensified, Speedhandle (to be used with the throttle) and Walk-and-Push modes.

This last is slightly unnerving; having selected it inadvertently, I began wheeling the machine, only to find it trying to lurch from my grasp before returning to quiescence after a couple of wheel revolutions. I failed to get it to operate for more than a few yards but could no doubt have done better with practice.

More important is to set the maximum speed to 15mph to comply with the law. This is where the instructions took some interrogation. Eventually, after several false starts and nearly setting off with maximum speed set to 50kph (which it may not have reached), I got it figured out and managed to set the maximum to 24km/h, or the magic 15mph. (The speedo and odometer can be swapped between miles and kilometres; the max speed setting stays in km/h).

Perhaps unsurprisingly, the ride experience under power closely matched that of the two pedelecs tested in Cycle Aug/Sep 2015. There are differences, mainly in the Panda’s favour. Having optimistically started in Eco mode, I quickly scrolled to Intensified in search of full power. The power readout (in Watts) provides useful information, in that it gives some idea of how much difference 250W can make on a climb. A lot!

I took the Panda-equipped machine on a loop of local lanes including a couple of stiff ascents and a long, fast, shallow downhill. The most surprising feature of the assist’s power output was that it appeared to be only fleetingly related to pedal force, responding instead to speed and diminishing as this approached 15mph, at which point it ceased. So I could stick the bike in, say, 48/17 and press relatively gently on the pedals while sailing up a 1:10 gradient at 11mph.

One feature I found disconcerting was the Panda’s habit of continuing to provide power for a couple of seconds after pedalling ceased. It’s a useful feature when setting off, but unsettling when making a U-turnin a narrow lane… Fortunately, using either brake lever immediately cuts the motor.

There is some drag in the M-Drive unit when switched off, perhaps twice that of a belt-drive transmission. Riding the bike without assistance was easy enough on the flat, and it could be coaxed up to a decent lick on a slight downhill. Riding uphill without assistance was much harder work, partlydue to the system’s weight – about 8kg in total – and because the chain derailed atthe front on the larger rear sprockets (see below).

Nevertheless, the bike was easierto ride unassisted than either of the ‘proper’ pedelecs mentioned previously. 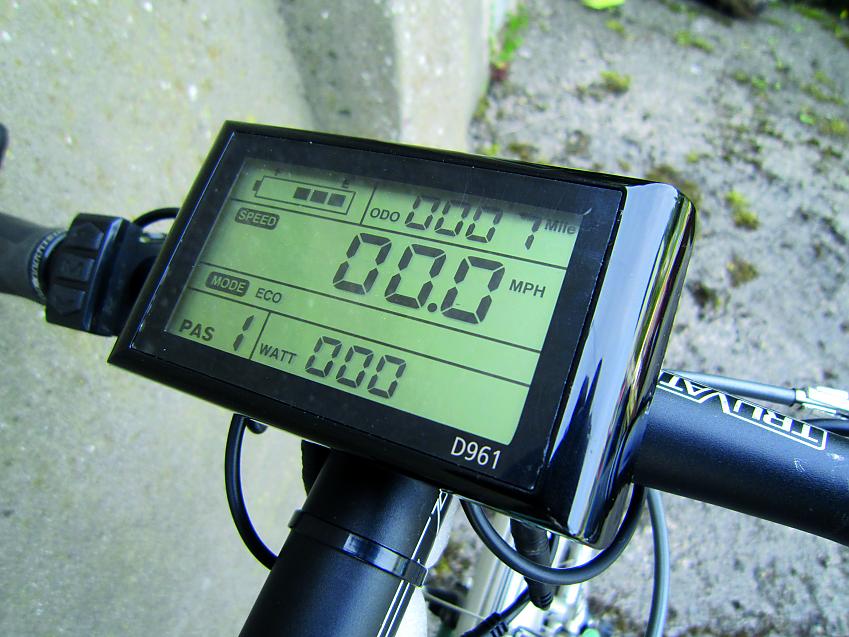 All in all, this is an effective way to get into electrically-assisted cycling, with performance on a par with that of factory pedelecs and – as installed on this bike – less effort needed when riding unassisted. The most obvious issue I found on the test ride is chainline. I measured it at 50.6mm – so far out that the chain would not runon the third largest rear sprocket without derailing off the chainwheel. Given that the chainwheel is in pressed steel and has a slight dish, it should be easy enough for Panda to add another 4mm or so of dish, bringing the chainline inboard by the same amount and improving operation across the rear cassette.

The chainwheel has 48 teeth. This, withan 11t rear, gives too high a top gear given the Panda’s expected usage; 45t would surely be better, or perhaps Panda could offer a choice of sizes? Pedal tread, or ‘Q’ factor, is wide due to the use of splayed cranks on an already-wide axle. A reduction of 15-20mm would be useful.

Battery life appears good: a range of 20-40 miles depending on power usage is claimed for the 13Ah batter with 250W motor, but on a six-mile loop with climbs taken at full power the charge indicator remained on three bars. At £700 for the drive and battery, it’s not cheap, but it is effective – and easy enoughto fit by a competent home mechanic. 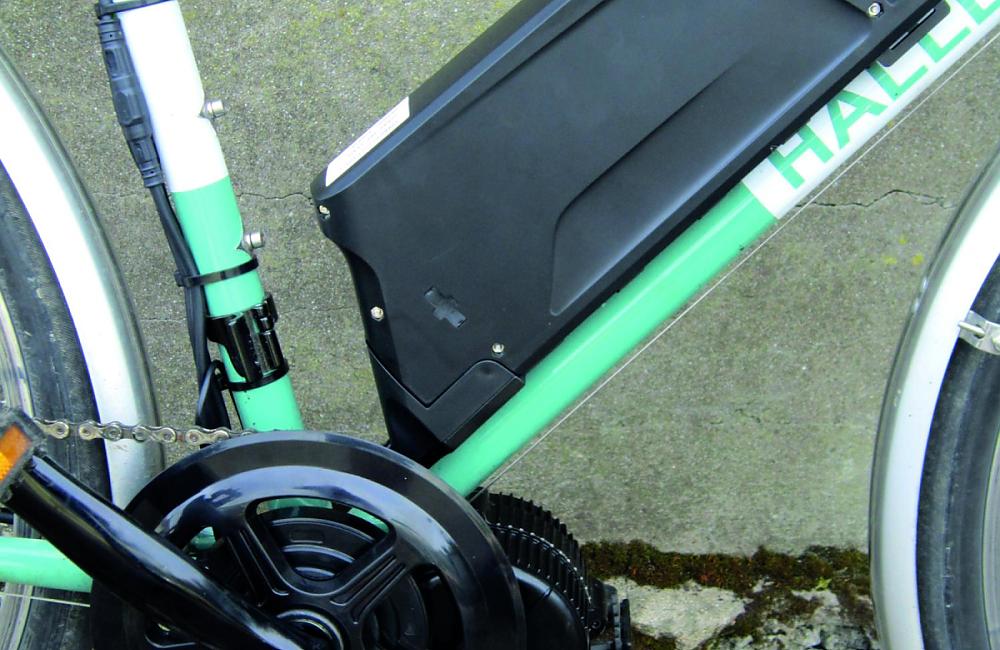 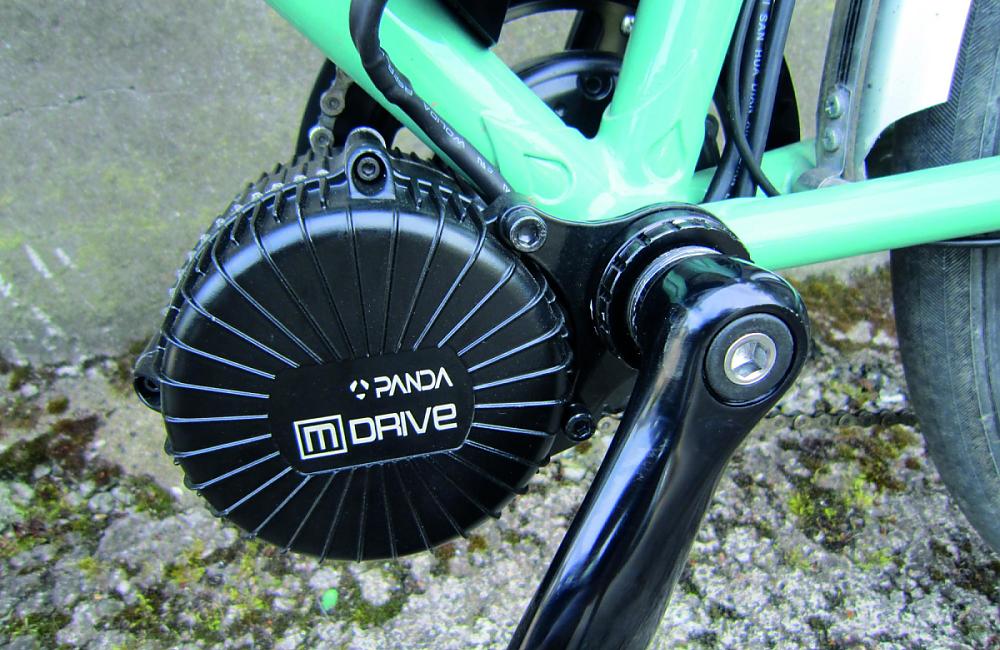 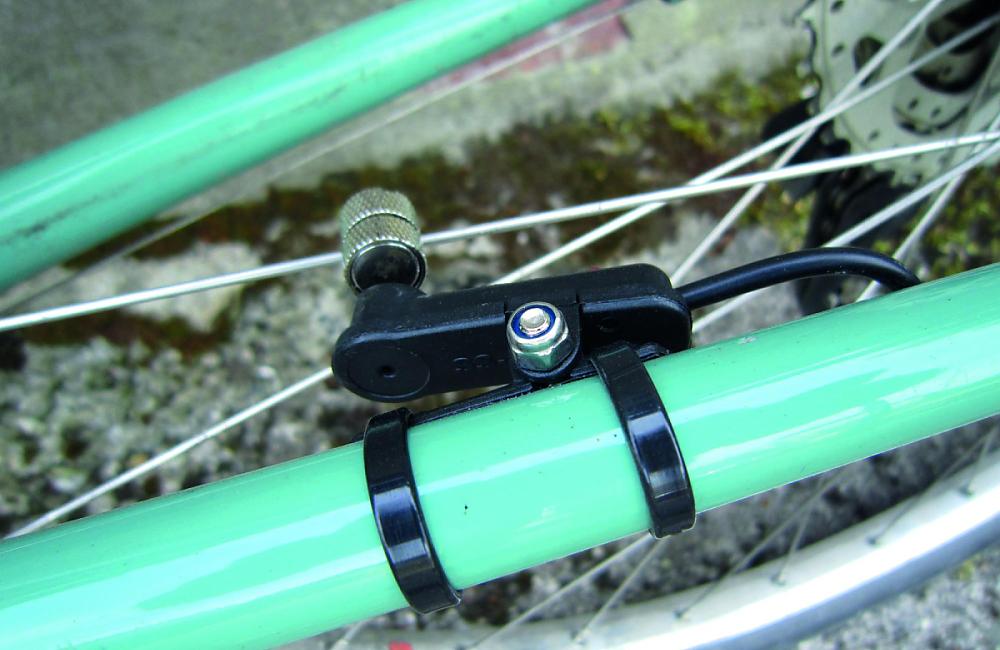 The legal position in Northern Ireland

The legal position is the same in Northern Ireland as the rest of the UK. In May, the Northern Ireland Assembly passed the Electrically Assisted Pedal Cycles (Construction and Use) Regulations (Northern Ireland) 2020 which updated an outdated law. While the Assembly had not been sitting an opportunity to bring the law into line with other nations had been missed.

E-bike offences to be aware of in the UK

Although current regulations ensure users of compliant e-bikes in the UK are exempt from requirements like licencing, MOTs and helmet use, as mechanically propelled vehicles, riding an e-bike can open you up to a number of road traffic offences which do not apply to traditional cycling.

For example, speed limits apply to e-bikes, as do offences relating to failing to stop at the scene of an accident ('hit-and-run'), and offences relating to mobile phone use while ‘driving’, drink/drug ‘driving’. E-bike riders can also be convicted of offences for ‘careless’ and dangerous’ driving, along with their ‘causing death by…’ and ‘causing serious injury by…’ variants.

The confusion and lack of consistency in this area of law is a further reason why Cycling UK believes the wider road traffic offences framework needs urgent review, so as to maximise the safety of all road users, without unnecessarily deterring safe cycling.

Device notorious from ‘motorised doping’ sits hidden inside the seat tube. Drives the BB axle: 200W for up to 90 mins. Weighs 1.8kg.

Utility cycling with an electric bike is a game changer View