Smartphones are almost a requisite for the modern-day cycle tourist
By Richard Hallett
Tuesday, 1 August 2017

When mains electricity isn’t an option, a hub dynamo can keep your electrical devices topped up. Technical editor Richard Hallett explains how.

Cycle touring is not necessarily quite what it used to be. Once it was simply a matter of loading up with luggage, a map-holder, and perhaps a tent before heading off for a week in the wilderness. Nowadays, the growing popularity of bike-mounted electronic aids such as GPS cycle computers and the desire of many touring cyclists to stay connected to the online world while travelling means it is all too easy to travel laden with small and light but energy-hungry electronic devices. Each of these will be powered by a battery that will, sooner or later, require recharging.

While this is not much of an issue for cyclists who rarely ride for more than a couple of hours, and within easy reach of a plugged-in battery charger, it poses something of a challenge for anyone whose ride-time exceeds the battery life of the gadget in question. This does not have to mean a long-distance cycle tour; the battery life of a smartphone using mapping software may be a mere handful of hours, which impairs the usefulness of the device as a navigation or record-making tool. Keeping tags on device battery life might even count as cycling’s equivalent of the ‘range anxiety’ apparently experienced by electric-car drivers.

Power to your devices

Options for remaining powered-up depend in part on the power requirements of the device in question, and are, inevitably, few, given the restrictions on space and energy consumption imposed by cycling. One solution is to carry a spare battery, but that means extra weight and does not fully address the basic problem of limited battery life. Small solar arrays capable of charging a larger tablet device are available but need both sunlight and a position that takes advantage of it, making them better suited for use in camp rather than on the road.

A hub dynamo is self-contained, durable, efficient, quiet, and reliable."

The effective, accessible solution is to use a hub dynamo. When not employed for lighting, it can provide the power needed: to keep a small device charged; to recharge it; or to charge an auxiliary or ‘cache’ battery for use later. With a few exceptions, modern hub dynamos operate on six volts and are designed to generate three Watts at normal riding speeds. This is enough, if used judiciously, to keep the savvy touring cyclist largely self-sufficient. If more than 3W is needed, one of the options mentioned earlier may be needed in addition.

It’s not a huge amount of power, so not an amount that can usefully be split two ways; if a dynamo is being used to power lights, there may not be enough to charge a device or battery at the same time. This is where the fun starts… Even in summer at northern European latitudes, when there may be as much as 19 hours of daylight, keeping a GPS computer or mobile device charged through 24 hours’ riding may require a bit of juggling, perhaps involving the charging during the day of a cache battery that can be drawn on during the wee small hours as the internal battery runs down. Within these limitations, in-ride charging using power from a dynamo is a great way to keep your electronic gadgetry running on a longer ride. Essentially, you need a dynamo and a way to make its power usable by your device. Here are the basics.

In order to be able to charge your device while riding, you’ll need a USB port with supporting electronics wired to the dynamo. The Universal Serial Bus, or USB, was introduced in the mid-1990s following collaboration between some of the biggest names in information technology. It was designed, according to one authoritative online encyclopedia, to standardise the connection to personal computers of their ‘peripheral’ devices and, importantly, to permit the supply of electrical power.

The USB charger’s electronics ‘condition’ the alternating current and 6V provided by the dynamo to the specified 5V DC. They can be incorporated in a dynamo-powered headlamp or installed in a discrete unit that can then be fitted somewhere on the bike.

The connecting cable supplied with your device will have a ‘B’ end that fits the device – there are several formats – and a standard USB ‘A’ end that enables it to be connected to any USB outlet. The industry standard for USB connectors requires that they deliver a consistent 5V, which will charge the 3.7V lithium ion battery in your mobile device at a rate that depends on the power generated by the dynamo. You obviously can’t get more power out of the USB port than the dynamo generates. 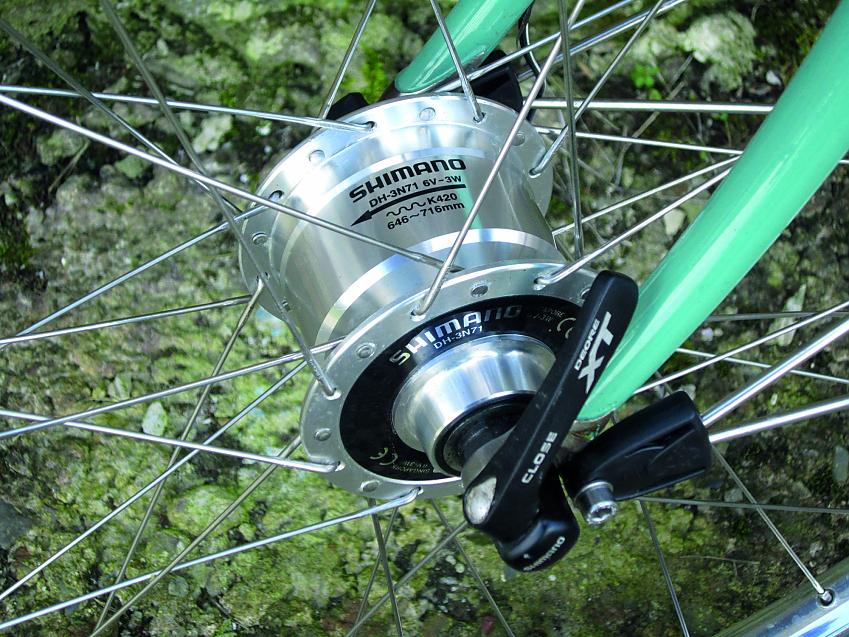 If you are to enjoy electrical self-sufficiency, you will need a dynamo fitted somewhere about your machine. If you’re setting up an on-board charging system, a hub dynamo is the way to go, not least because some USB chargers won’t work with the lower power output of a bottle. There is, in any case, something comforting about a hub dynamo: it’s a self-contained, durable, highly-efficient, maintenance-free, virtually silent and ever-reliable means of on-board power generation. Drag is usually lower than with a bottle, which must press against the tyre sidewall with enough force to prevent slippage.

Obviously, the cost of a dynamo hub includes a wheel build and parts, but once bought, it is a product that can be expected to last for years. Weight may be a consideration, but a Schmidt SON hub weighs less than 400g and a Shimano XT less than 500g. In comparison, a regular aluminium non-disc front hub is around 150g.

Charge a cache battery during the day and it can be drawn on in the wee small hours."

Drag when not generating power is not only insignificant – the equivalent of an average-weight cyclist climbing one foot per mile – but irrelevant if the hub is to be used for in-ride device charging, when it will be the same as when using lights – i.e. around five to six per cent of total effort, which roughly corresponds to a 90kg rider-plus-bike climbing a 1:1,000 gradient. That’s around five feet of climbing per mile.

If you ride at night using a dynamo to power the front or both lights, it makes sense to fit one of the several front lights available with an integral USB port and the electronics to support it. There are downsides: you may not like the appearance of any of the candidates, and they tend to be designed to fit the front of the fork crown, which may then get in the way of handlebar-mounted luggage. Otherwise, this is a neat and cost-effective way to install on-board charging capability.

A USB charger comprises the port itself and its supporting electronics, encased in some sort of housing and fitted with wiring that enables it to be connected to the dynamo hub. The housing can be anything from a simple plastic cartridge, designed to be either strapped to a frame tube or kept in a handlebar bag, through to a sophisticated component typically constructed to take the place of a 1 1/8in threadless headset cap. While neat and theft-resistant, the latter requires a suitable headset arrangement and places the USB port in a position inevitably exposed to adverse weather. 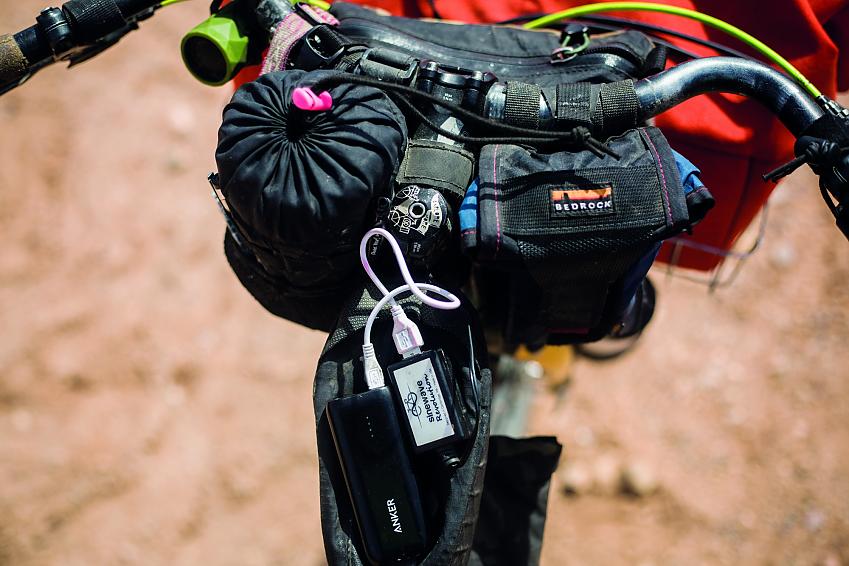 Above: A cache battery being charged via a Sinewave​ Revolution

A cache battery can be useful for two reasons. Firstly, it can be installed between the USB charger and the device to be charged. The dynamo keeps the cache battery topped up and the battery provides a steady supply of power regardless of riding speed. In some cases, such as some Garmin GPS computers, this may be necessary to keep the device working below 12kph or so. Secondly, a reasonably-sized (2,000mAh-plus), fully-charged cache battery can be used to recharge a device post-ride, enabling the user to keep more than one gadget running.

All being well, you will be able to rely on a dynamo-powered USB port to operate a small electronic USB-compatible device such as a smartphone, digital camera, GPS computer, GoPro-type video camera, MP3 player, or even Kindle reader while on tour. There are a couple of potential stumbling blocks. Some USB chargers will temporarily switch off should the voltage supplied by the dynamo drop below, perhaps, 4.5V at low riding speeds, typically below 12km/h. (One that does not, at least on the short term, is the IgaroD1, which employs even more sophisticated electronics than usual to monitor dynamo output and smooth out the power delivery.) Also, your electronic device(s) may be charge-sensitive, switching off or performing some undesirable warning function if the USB output drops below 5V, again at low riding speeds. A cache battery (see above) should address this.

In use, a device may consume more power than the dynamo can generate; some smartphone mapping software, for example, can drink a lot of juice. Turning off unwanted programs and applications may reduce power consumption to a manageable level. As a rule, a dynamo-powered USB charger will struggle to power a device requiring more than 1 amp unless you consistently ride at race speed.

Versatile on-board power supply that allows both voltage and current to be pre-set using small dials for use with a wide range of devices. Correct adjustment is the user’s responsibility. Handles a maximum of 16W, although you’d need to be going very fast indeed to get that from a hub dynamo. A good choice for anyone using a number of devices with differing needs; some have reported successfully powering Shimano Di2 electronic shifting. Separate cache battery (available from B&M) required for devices needing constant voltage supply.

Neat, unobtrusive and highly-functional USB charger that takes the place of your 1 1/8in threadless headset top cap. Theft-resistant once installed, the Reactor starts charging at 5km/h, reaches full power at 14km/h and has high-speed overload protection. Maximum current is 1A. Although the Reactor itself is waterproof, the USB port is open to the elements and may not work well in a downpour.

Classic high-end dynamo hub with class-leading efficiency and reliability. Lightweight, too, and available in loads of colours and formats. Surprisingly affordable given its reputation and appearance.

Superseded by DH-3N72 Nexus model. There are lighter, more efficient and more expensive dynamo hubs from the Japanese manufacturer but the Nexus model provides durable, affordable and effective performance. Heavier by some 100g than a Schmidt and less aesthetically pleasing, but a sound choice nonetheless.

Typical inexpensive ‘powerbank’, small and light enough to use as a cache battery with enough storage to recharge most smartphones. There are countless alternatives.

Three whole Watts may not sound much, but it’s roughly three times the power used by a smartphone to make a GSM call. As a rule, a dynamo hub easily generates enough power to run a GPS cycle computer and recharge its battery at the same time. Smartphones may consume a lot more power, so it helps, if using one, to turn off any apps you don’t use in order to reduce power consumption.

Power measured in Watts is calculated as voltage multiplied by current, or amperage: 3W at 6V – the hub dynamo standard – indicates a current of 0.5A or 500mA. Dynamo voltage increases with speed and, depending on the model, may only reach 6V at upwards of 12km/h. At high speeds, it may hit as much as 12V and most USB chargers will switch off to prevent overheating if subjected to excessive voltage. It may be a good idea to disconnect a charger if tackling a long high-speed descent.

A quick, if not super-accurate way, to gauge how long it will take to charge a battery from flat is to divide its capacity in Watt-hours, e.g. 9.6Wh, by the amount of power supplied, e.g. 3W. That would be about 3 1/4hrs on a good day, discounting efficiency losses.