This section of the Great North Trail follows the ‘An Turas Mor’ route (Scottish Gaelic for ‘the long journey’), developed by Obscura Mondo Cycle Club.

The route is still very remote and wild, although there are some easier and flatter sections, plus good trails.

You’ll explore long and remote glens, pass hydro power stations, far flung lodges and shimmering lochs. With this raw beauty and freedom, though, come few and far between facilities, and little shelter from rain and wind. So, be well-prepared for hostile conditions, book and plan ahead.

This journey also lets you choose the ending to your story: will it be John o’ Groats, the most north-easterly port of mainland Scotland, or Cape Wrath, the quiet, remote and most north-westerly point?

Note, however, that rough seas might cancel the small ferry over to the Cape Wrath peninsula, while the MoD may close off the land to the general public. If you make it to the lighthouse, though, views of the wild sea, a café and a wonderful remote bothy on the beach await you. You will also be eligible to join the Cape Wrath Fellowship.

The journey to John o’ Groats may be further, but with mostly quite singletrack roads and good tracks across this now much flatter land, and with the end in sight, it will fly by.

For one last adventure into the wild hills and the reward of a superb descent and a little less tarmac, opt for a tougher loop via Loch Choire.

As a destination, John o’ Groats is hugely popular - but for a more personal, wild and natural finish line, make the short detour to the magical Duncansby Head.

Sit down on the cliff tops, gaze out to sea and reflect on the amazing journey that has brought you here. 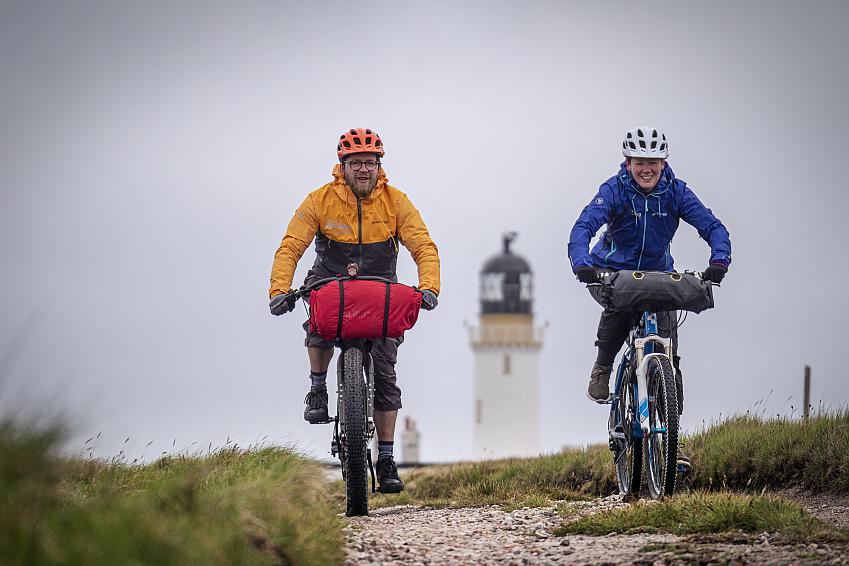 Reach the lighthouse and you'll be eligible to join the Cape Wrath Fellowship. Photo by Rob Spanring

Navigation is relatively simple, passing along quiet glens, with only a few limited route choices to make. It is, however, imperative that you make the right choice, as the remote location and lack of mobile reception could potentially be very dangerous.

Technically speaking, the riding is not very challenging, but it is increasingly more remote, with long stretches between civilisation.