This is the longest of the Penzance routes at 48km and takes you out past the picture-perfect fishing village of Mousehole to the very end of mainland Britain at Land’s End, before looping back along a rollercoaster of deserted back lanes. It’s loaded with interest, from the joy of the Merry Maidens stone circle to the tragic drama of the Penlee lifeboat station, as well as stunning views from the idyllically pastoral interior to rugged rocky coastlines.

The route is all on well-surfaced roads apart from a short section of gravel cycle path near Sennen Cove that will be fine on a road bike. There are also some gravel options if you fancy a dirty detour. Either way there are some steep gradients, so be ready with your winch gears or walking shoes and check your brakes are working for the Cornish corkscrew descents.

Have a look at the other routes: Carn Euny and Ding Dong. 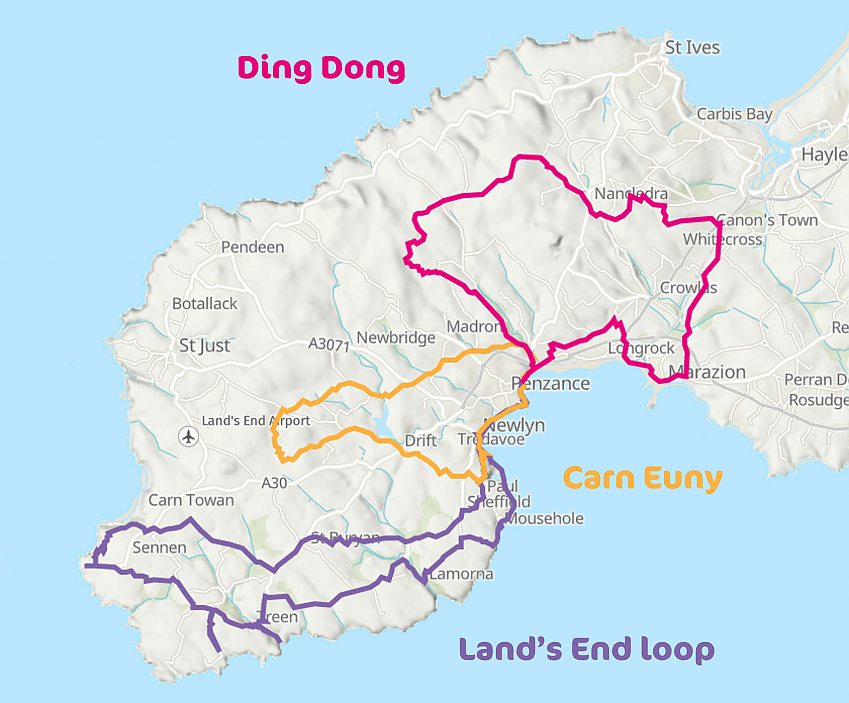 Starting from Penzance Railway station, take the cycle path through the harbourside car park and then follow the harbour road over the bridge past old dock buildings, pirate themed pubs and the amazing Art Deco open air Jubilee Pool. You’ll stay along the beachfront on the cycle path past Wherry Town before climbing gently past the working fishing harbour of Newlyn.

Keep your eye out for signs for National Cycle Network 3 which will take you along a cycle path to the left before you pop onto a roadside bike path to Penlee lifeboat station. The RNLI don’t operate from here any more, but the station is preserved as a monument for the incredible bravery of the Penlee crew who lost their lives in a hurricane force storm trying to rescue the remaining crew of a doomed freighter just a few days before Christmas in 1981. 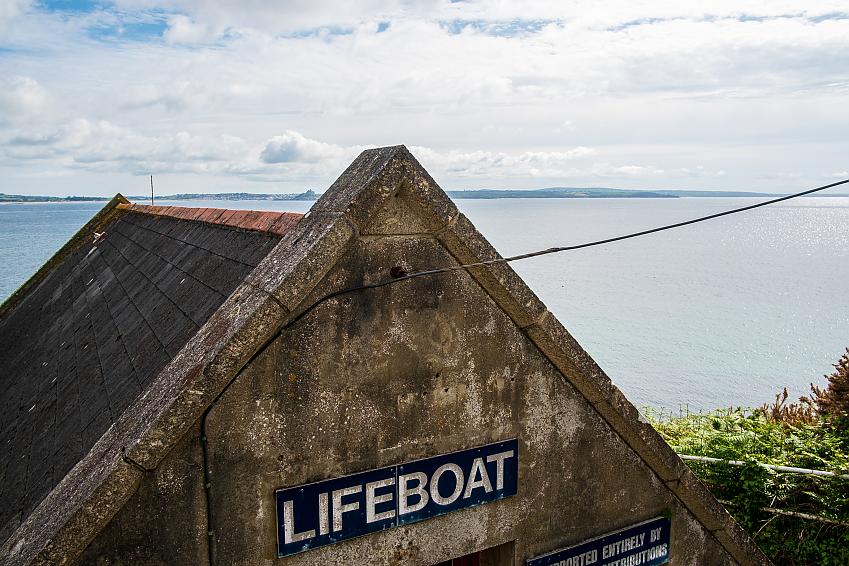 All of the crew lived just around the corner at Mousehole. This stunning village is a perfect natural harbour which got its name from the tiny storm-thwarting entrance that shelters behind St Clement’s Isle just offshore. It was the busiest port in West Cornwall until well into the medieval period, with boats fishing and trading all the way from the Mediterranean to the Scottish islands and beyond.

You can see obvious classic ‘Atlantic coastal village’ character in the tiny twisting streets and stacked cottages that were once described by poet Dylan Thomas as the “loveliest village in England”, and he honeymooned there with Caitlin MacNamara after they got married in Penzance with rings made of Cornish silver. You don’t have to be a poet to appreciate the beauty or the local pubs, but go easy on the ‘pubbing’ (as Thomas called it) as the climb out of the village past Point Spaniard (named after the Armada invaders who torched the village in the 1500s) will burn your legs too - even if you’re pushing. 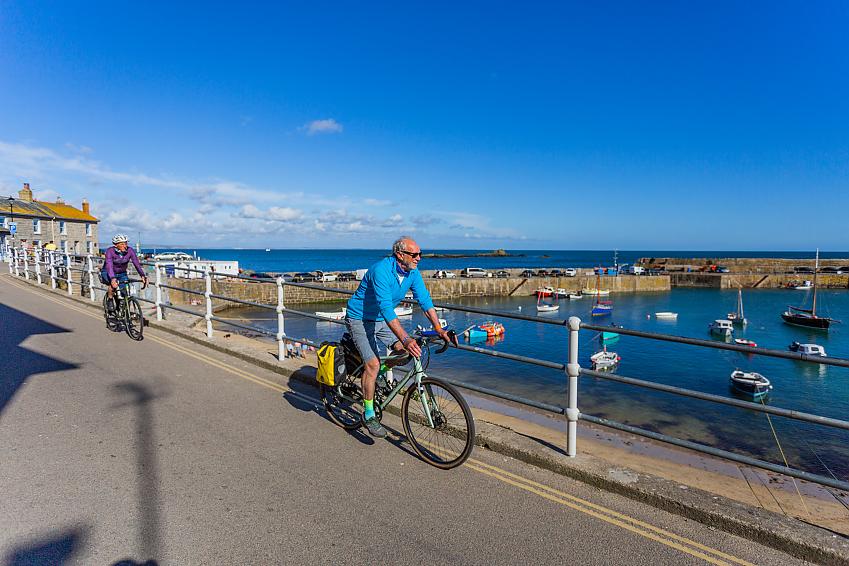 It’s definitely the most significant climb on the route so don’t worry too much about getting punished again, but if your legs have had enough, the T-junction at the end is only 500m away from the inbound leg through Paul if you just want a short loop out to Mousehole and back.

Left takes you onwards along floral banked lanes through Castallack, with hut circles and a standing stone just off the bridleway to the north if you fancy a gravel detour with prehistoric precedents.

You’ve still got a thrilling section on road too, as the narrow lane corkscrews down into Lamorna without much room for handlebars, let alone oncoming traffic, so be sure to ride safely.

The climb up Lamorna valley is a perfect example of the almost rainforest-esque richness you’ll find in the densely wooded, ferned and bird song soundtracked pockets of almost every stream cut section of Cornwall.

The warmer climate means flora fans will spot all sorts of rarities too, but even if your ‘I-Spy’ gardening index stops at Rhododendron you’ll still appreciate the beauty and the perfumes as you wind upwards again. There’s a steeper off-road short cut too if you’ve got the gears and the tyre grip to tackle it.

People have clearly been making the effort to climb up and appreciate the rich soils and magical landscape of this area for millennia. The next kilometre takes you past ‘The Pipers’ standing stones, the Merry Maidens stone circle, and a chambered stone tomb right next to the roadside, as well as several tumuli burial mounds and some medieval crosses presumably erected to peg back the paganism.

Whatever your persuasion, it’s an area that’s clearly humming with significance for our ancestors and well worth hopping off your bike for a quick explore before heading further west on wide but largely empty rise and fall roads towards Penberth.

Dropping down to this tiny cove is a tiny narrow lane 'there and back’ endeavour that’s too much of a pain to park to be popular. That’s a total win for cyclists though, as the lane acts like a time travel gate to an utterly beautiful cove with a few scattered cottages around an ancient cobbled slipway, with a big man/donkey powered boat windlass at the top for hauling in the catch. There are public toilets too so it’s a great, quiet cycling stop even in the high holiday season.

Retrace your tracks a few hundred metres up the valley and then you’ll ramp up to the Logan Rock Inn at Treen. Named after an 80 ton rocking boulder atop the cliffs overlooking Porthcurno bay, this 16th century inn not only serves award-winning food but it also marks another smooth-or-rowdy route split option.

Climbing left through Treen puts you onto the West Kernow Way, which joins the South West Coast Path bridleway where stunning seascape views lead into a narrow, rocky step descent. Be warned that this would challenge most mountain bikers, so be prepared to dismount voluntarily before a boulder does it for you. The severity of this section is why our route stays on the road through Trethewy before another down-and-up into Porthcurno.

With the unique open air Minack Theatre overlooking the beach, cafés, a pub, toilets, and a museum telling the fascinating story of the undersea telegraph cable that came ashore here and revolutionised global communication (the bit about them interrupting Marconi’s radio competing radio transmissions is comedy gold) we think it’s well worth the extra 2km. 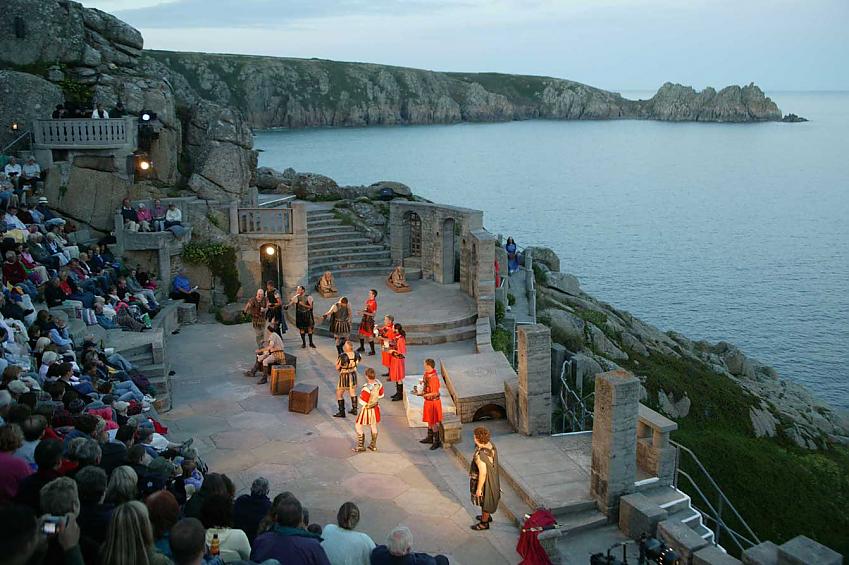 Whether you dip in and out to Porthcurno or not, it’s more rolling road between Cornwall’s signature towering hedge banks into Trevescan. Then there’s a kilometre of main road straight into Lands End, but speed humps and strict limits mean it’s a very safe stretch to ride even when it’s busy. If you’re lucky with the weather, grab your pictures of the incredible cliff views and any momentos you need, being sure to tell anyone who asks that you are just about to set off for John o’ Groats, but you’re taking it steady so giving yourself a whole five days.

Remember to look suitably determined and heroic as you jink around the wide gravel track to Sennen Cove too, enjoying the views out over the prehistoric promontory fort of Maen Castle and its neighbouring cairn and barrow burials.

While the path takes you high above the long surfers’ paradise beach, feel free to drop down and hang around for a while or grab a bodacious bite at the surfers’ café. It’s the last chance for a bit of sit down sustenance for a while too, as from there, the route dives across the cycle path at the side of the main road and into the interior again.

Cue more towering banked, rise and fall back roads that are narrower than many bike paths we’ve ridden. It's mostly traffic free, say for occasional tractors crossing between the phenomenally rich, dark soil fields that often still have the layouts of millennia ago. 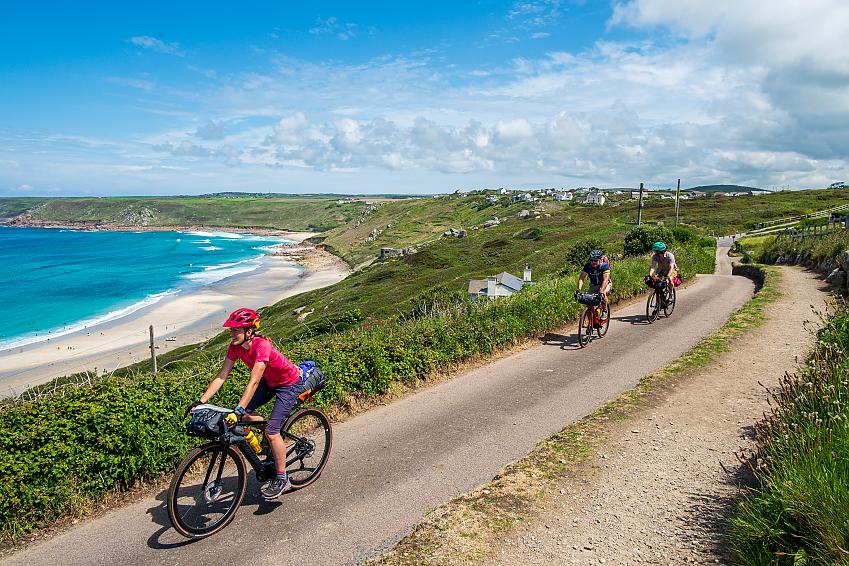 St Buryan is one of the many reminders of Cornwall’s important religious past too, particularly in the early days of Christianity when many saints and leaders wandered the Atlantic coasts as missionaries or escaping different waves of invaders before settling in the area and lending their names to towns and villages.

It’s another chance for refreshments before cutting across more deserted roads behind Lamorna towards Paul inland of Mousehole. Here you can extend the route and add in the enchanted prehistoric village of Carn Euny by switching onto the Carn Euny loop to the west and then looping round the back of Penzance for a roughly 65km ride.

If you’re happy with your total so far, wind out of the back of the picturesque village of Paul (they’re all pretty gorgeous really but we keep forgetting to mention it) and it’s finally time for payback on the Mousehole climb with a glorious twisting switchback descent through the back of Newlyn which drops you out above the new home of the Penlee lifeboat. From here it’s back along the seafront to the start or a diversion inland to explore Penzance town.