This ride starts by exploring the quiet, rural countryside of Kent, using bridleways and back roads, to pass through the ‘garden of England’. The peace and tranquility of the ride through these gentle green hills are replaced as you hit the coastline, with concrete tracks, busy paths and numerous cafes and shops.

It is also home to some interesting history, with easy riding along the Oyster Trail and the Crab and Winkle Way cycle paths that include various refreshments and options for a paddle in the sea. This makes a nice break to the ride, before heading back inland along more well-surfaced tracks to finish the adventure.

This is one of three routes starting from the Cycling UK EXPERIENCE hub in Canterbury.

Have a look at the other routes: Canterbury Cathedral and Canterbury to Chilham. 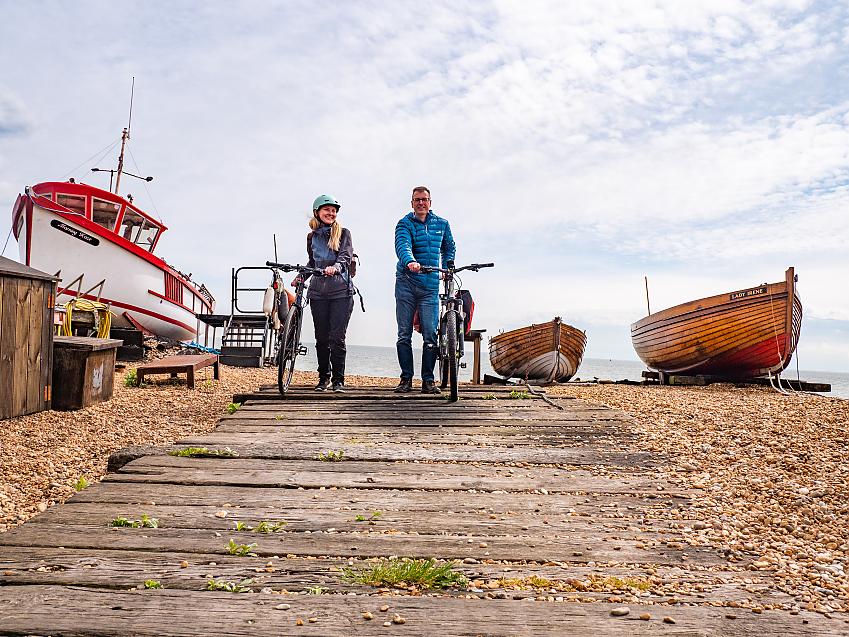 Your journey starts along the Crab and Winkle Way, a shared multi-use trail named after the railway-line it has replaced, which took its nickname from the seafood that Whitstable was famous for. This railway line was the third ever built in the world, and the first steam-hauled passenger train to issue season tickets, in 1834.

However, you don’t follow this to the coast now; it will be used to guide you back to the start later. Instead, you peel off into the popular Clowes Wood, and join a good forest track which leads you on a straight journey cutting through the centre of Thorndean Wood on an ancient droveway, almost a thousand years old.

Before Kent Wildlife Trust bought this wood, it was managed commercially for timber production, which is why around half of it is plantations are non-native conifer trees. However, methods such as coppicing are being used to bring variety back into the woods and the pine plantations are slowly being replaced. Oak trees are being allowed to mature and all varieties of animals such as the Dormouse, Nightjars and the Fritillary Butterfly are thriving. Look out for the Konik Ponies too; this rare breed of pony is also helping to restore the woodland through grazing. 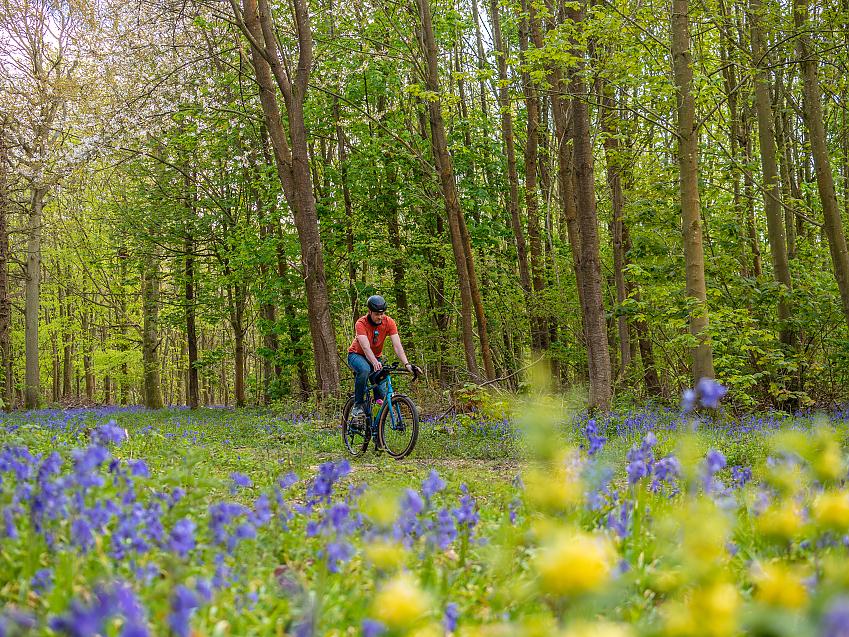 After leaving the woods behind, you continue through the countryside following a lovely mixture of bridleways and quiet roads, passing through quiet agricultural land, an orchard and fields with wild-flowers and butterflies.

Arriving at Reculver on the coast, the imposing twin towers of the medieval church dominate the skyline. This was the site of one of the earliest Roman forts built against Saxon raids on the 'Saxon Shore'. It later became the site of an Anglo-Saxon monastery before becoming the parish church for Reculver. The tall towers were built in a re-modelling of the church in the 12th century, although much of the site has been lost to coastal erosion.

Alongside the twin towers are the ruined remains of the early Roman fort. The Roman fort Regulbium only has the southern half of the fort wall still standing, but there are numerous information boards that provide an excellent sense of what once stood here. It's free to wander around and a lovely spot to stop and enjoy some refreshments in the cool sea breeze. There is a pub and a couple of cafes available here too. 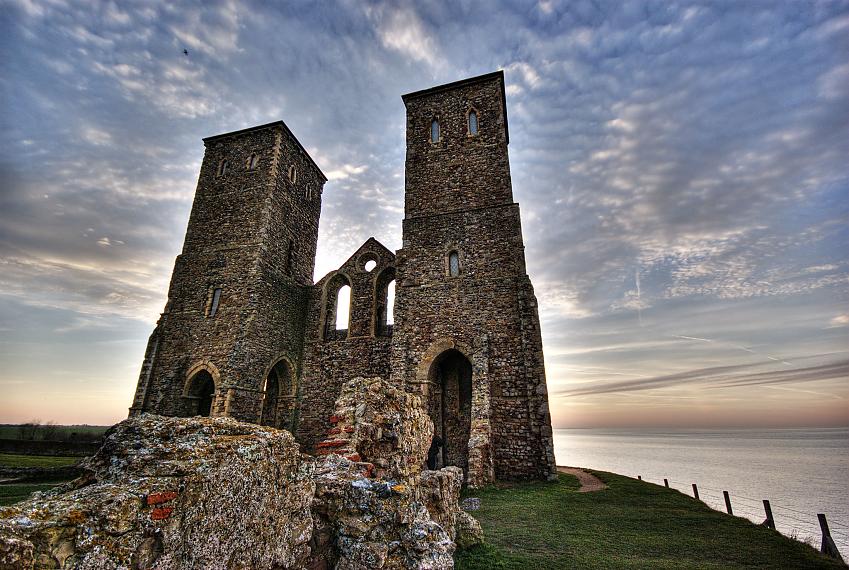 The Reculver Country Park is an internationally important area for wildlife where thousands of migratory birds make it home for the winter, and Sand Martins nest in the cliffs. The grassland cliff tops provide wildflower meadows which are home to butterflies, insects and skylarks.

The North Kent Marshes are recognised as one of the most important estuarine habitats for birds in the UK, offering a wonderful place to watch flocks of migrating birds, wildfowl and wading birds, as well as enjoy various plants and butterflies. On a clear day, if you look out to sea, beyond the white wind turbines, you may even be able to see the old Maunsell Army Sea Forts, five gun towers (formerly six) built during WWII to defend the Thames. Built in Gravesend, they were towed along the river, set on concrete 100 feet above sea level and connected by narrow catwalks.

The next section along the coastline shares its way with the cycle route known as the Oyster Bay trail, which runs for 10km from Reculver to Swalecliffe, passing Herne Bay along the way.

The path becomes busier as you approach Herne Bay, a typical seaside town, although until the end of the 18th Century, Herne Bay was not much more than a few cottages for fisherman, smugglers and some agricultural labourers. There wasn’t even a proper road to the coast from Herne or Canterbury until it came under the control of the Turnpike Trust at the end of the Napoleonic Wars in 1815.

It was also the location of the final test drop of the ‘bouncing bomb’ back in 1943, designed by Barnes Wallis, where a statue commemorates him, and operation Chastise, the attack against the dams of the Rhur Valley in Germany, during WWII.

After the quiet countryside and woodland trails, this coastal section along concrete tracks beside the beach is starkly different; with easy, flat hard trails lined by shops, cafes and beach huts which sell for as much as £86,000. Famous for its oysters, Whistable has an oyster festival ever year, around August, and the Whitstable Oyster Fishery Company traces its roots back to 1793, but oysters have been a part of Whitstable’s history for far longer. Documentation proves Romans loved Whitstable oysters and were sending oysters back to Rome around 80 AD.

The town is still a food lovers paradise today, and it’s well worth exploring the food-serving shacks along the seafront, as you enjoy the largely traffic-free route through the town. 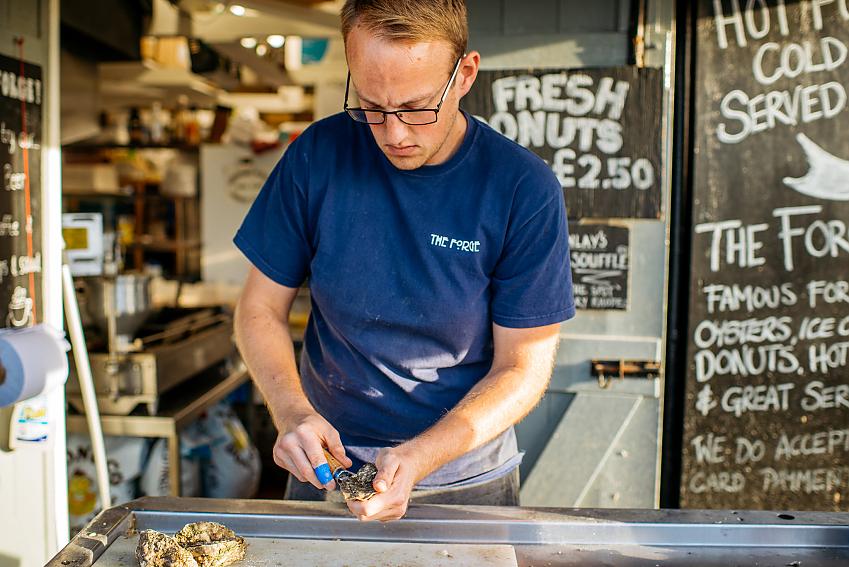 The Industrial Revolution really helped shape this area, with the first ever railway in 1834, bringing Canterbury residents to Whitstable for their holidays, and the seafood. The Crab and Winkle railway attracted many famous engineers: George Stephenson and his son Robert built the Invicta locomotive, which pulled the carriages, Thomas Telford built the harbour in Whitstable where the railway ends, and Isambard Kingdom Brunel inspected the route’s railway tunnel, the first in the world to take passenger trains.

Although the railway has now gone, the fact that it has been replaced by a cycling and walking path still enables people to travel the lovely journey between the city and coast. Leaving the busy streets of Whitstable behind you, and your last chance to have a dip in the sea, you head inland, between the backs of houses along tree-lines avenues, on well surfaced tracks, following the old railway line. The trail climbs to Clowes Wood, where you were earlier, and this time you continue along the Crab and Winkle Way, re-tracing your earlier outward journey back to the car park.

If you wish to extend the ride further you can continue along the cycle route past the University of Kent into the heart of the city, for some further sight-seeing and café visiting.