Start location: Westgate Tower, although if you aren’t staying in Canterbury and arriving by car, you could either start just outside Canterbury at the Toddlers Cove car park, or from Chilham, which has a large, free car park, with toilets on the edge of the village.

This route offers a nice, gentle ride along the River Stour which is suitable for all types of bicycle, including a road bike, although you’ll want to stick to the road and avoid the short optional off-road trail between Chartham and Chilham if you are on a road bike. You can ride it from either one of the ends, and catch the train back, or ride it in both directions if you wish. With so much history to see in Canterbury, a charming setting with refreshments to enjoy in Chilham and lovely countryside including a vineyard to visit along the way too, it provides an enjoyable ride with a taste of traditional England thrown in for good measure.

This is one of three routes starting from the Cycling UK EXPERIENCE hub in Canterbury.

Have a look at the other routes: Canterbury to Coast and Canterbury Cathedral. 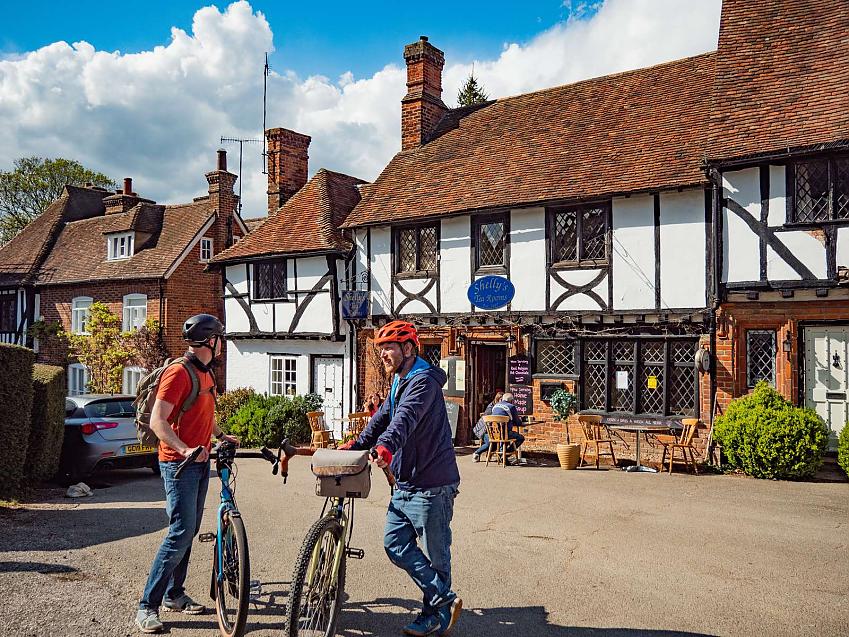 The ride starts from The Westgate, an impressive 60ft high medieval gatehouse in the old city wall and the largest surviving city gate in England. You exit the city across an ancient bridge over the River Stour (also known as the Kentish Stour); the second longest river in Kent, rising from springs at the foot of the Greensand ridge in Lenham, and flowing 76km through Canterbury to the North Sea at Pegwell Bay, near Sandwich.

Joining the beautiful Westgate Grove road you ride between lovely timber beamed buildings to your right and the river to your left. It’s a glorious sight, with the river bordered by superb flower beds either side, and with a church, the Tower House and the Westgate Gardens behind, it is stunningly pretty. It is no wonder Tower House is a very popular wedding venue, so you can probably expect crowds of people dressed up in their finest. It is made even more British with punt boat hire available by the bridge here too. It is an idyllic start to the ride and one you’ll likely want to stop and enjoy, so if you want to leave your bikes and explore further by foot, or boat, there is bicycle parking available just back through the archway at St Peter’s Place. 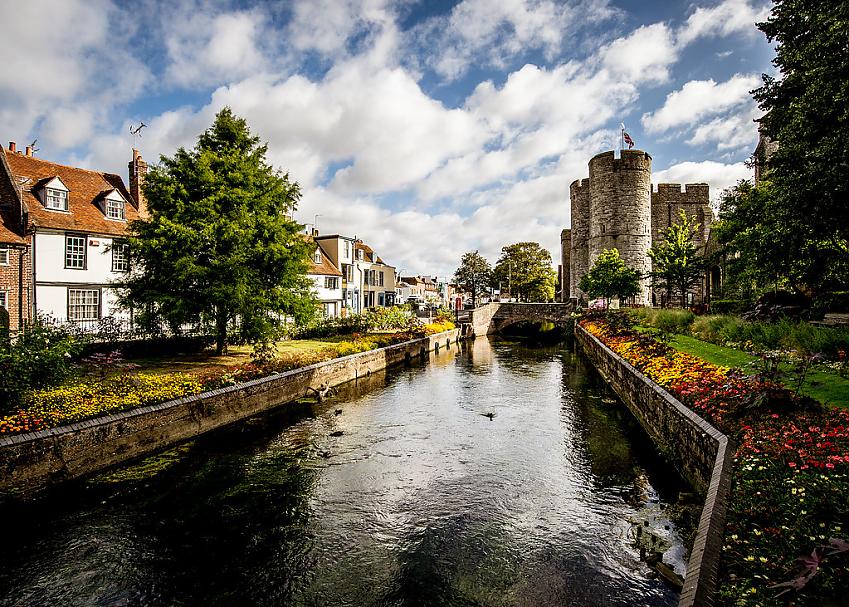 You presently share your journey with the Stour Valley Walk, a 93km journey through the Low Weald and North Downs. Following along the River Stour, you leave the hustle and bustle of the city behind you, until the popular Toddler’s Cove play area where a well-surfaced multi-use path leads you out into quieter surroundings.

You now pass through Whitehall Meadows Nature Reserve and Hambrook Marshes, returned to its previous marshland state, after having become a gravel pit after WWII. A local charity bought the land to allow public access and to protect and encourage wildlife to the area once more.

Between the spring and autumn you will mostly see grazing cattle, but there have also been over 90 species of bird spotted in these marshes in recent years and sightings include kingfishers, herons and even the elusive snipe. With a wide variety of flowers and plants here too, the area provides a wonderful habitat for the likes of slow worms, newts, dragonflies and many others, making it a great place to watch out for wildlife.

The multi-use, traffic-free track, also known as The Pilgrim’s Cycle Trail is part of the National Cycle Network route 18, and runs for 5 kilometres to  Chartham, providing an easy going, flat ride with simple navigation. Enjoy the beauty and tranquility as you wend your way to Chartham village.

An opportunity for refreshments is available here if required, with The Shop on the Green, a lovely little convenience store right by the route, or just off the route, to the south, is the very nice and friendly Artichoke pub. Located just over the bridge, its history dates back around 700 years, and it is full of character, with old oak beams and cosy corners to enjoy some fabulous food and drink, which it has no doubt served to many travelers and workers from the nearby paper mill, which has been in here since 1938.

To the north, just past the railway line, is Chartham Vineyard, a family-owned vineyard started in 2013. The soil here matches the terrain of the Champagne region of France, and they have produced award-winning white, red and sparkling wines. The vineyard shop is open on Saturdays from 10.30am to 5.00pm and visitors can enjoy a free art gallery, wine tastings and (pre-booked) group tours. 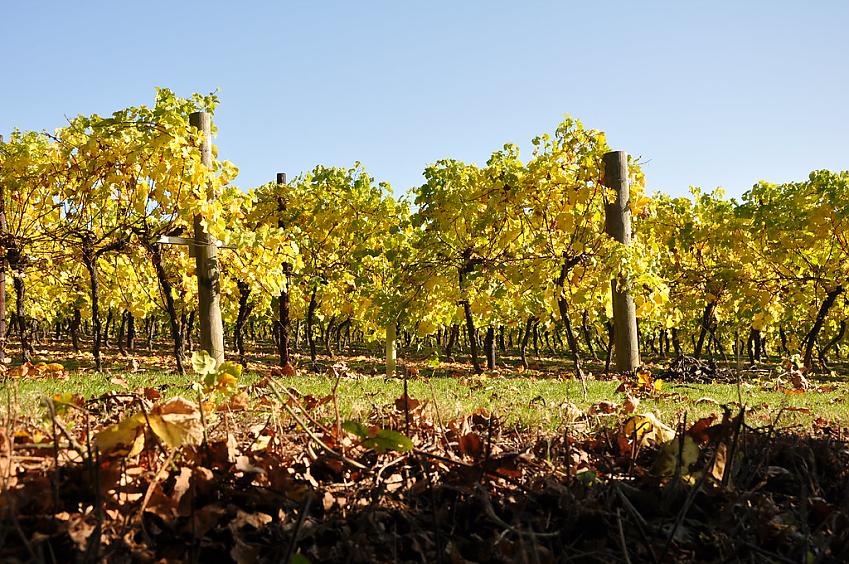 The ride continues through the village, momentarily leaving the riverside and valley bottom, for a short section of off-road trail, although if conditions are wet or you’d prefer a smoother journey you can simply continue to follow Pickleden Lane; the routes shortly re-join by the level crossing. You continue past Chilham train station and climb to your destination, Chilham village centre.

This lovely historic village provides a wonderful spot to stop for refreshments and further exploration. With its quintessential medieval square, the village often gets picked for filming, with the likes of Miss Marple, Poirot and Jane Austen’s Emma all having been shot here. With a choice of refreshments, from a light-bite or afternoon tea at the delightful Shelly’s Tea Rooms or a pub lunch at the White Horse Inn, both in the village centre, or even the 16th Century Woolpack Hotel for something more formal, this tiny village can cater for everyone. 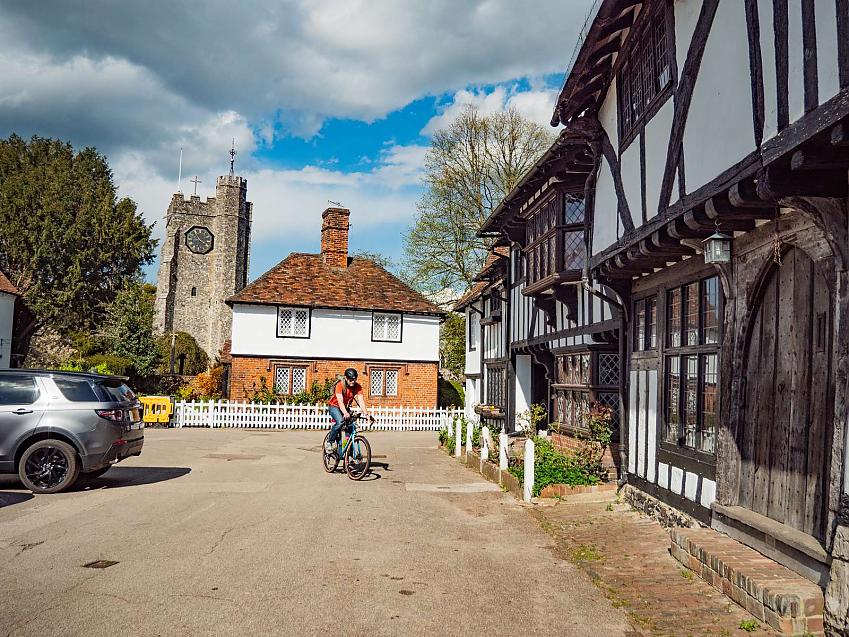 At the top of the square some chunky wooden gates lead to Chilham Castle. Only the Keep remains of the castle, and it is now a privately owned house on the site of the ancient castle. Originally built in 1616 by Sir Dudley Digges the house has received various additions and developments over time, including a lake and woodland whose trees were planted using the help of a young elephant brought from Sri Lanka!

The current owners hold events such as horse trials, open-air performances and open garden days (on Tuesdays in the summer months) and tours by special arrangement, which is worth planning ahead for. The village also has a pretty church, St Mary, located just off the square, which was mentioned in the Domesday Book, in 1086, but has a history going back possibly as far as the 7th century.

If you have a younger generation in tow which you need to entertain, the Badgers Hill farm garden centre is just over the A252 road from Chilham. Here there are animals such as miniature donkeys, sheep, goats, chickens, geese, Rhea, Wallabies and peacocks to see, and a café that offers some good food and chilled glasses of homemade cider.

All that’s left to do now is roll down the hill to Chilham station to catch the train, or cycle back along the way you came, to Canterbury, in which case you will surely have earnt a quick stop at the Chartham vineyard en-route if you missed it on the way in.