If you’re looking for some inspiration for your cycling in the new year, look no further than Cycling UK members Dan and Christine Mcnamara, who recently received a medal in recognition of their amazing feat in reaching all 402 checkpoints of the British Cycle Quest. Cycling UK’s Julie Rand spoke to them to find out more about the challenge and what it is like to complete it

What is British Cycle Quest?

The British Cycle Quest (BCQ) is a challenge created by Cycling UK and administered by our brilliant BCQ volunteer coordinators. There are 402 British Cycle Quest checkpoints throughout England, Wales and Scotland, including on many islands such as the Isle of Man and the Outer Hebrides; wherever you are, you’ll most likely find one or two checkpoints within cycling range.

It is a challenge without time limits – you can take as long as you want, maybe just visiting a checkpoint when you happen to be in the area. It’s about getting outside and cycling to as many points of interest across Britain as you can, finding locations you may not have thought of visiting by bike and answering a question related to it to show you really were there.

How long does it take?

Dan Mcnamara says: “BCQ took us 10 years and nine months, but we would have got under 10 years without coronavirus. I kept records of the cycling and we did over 10,000 miles in total.

“We started with our local ones, but early on did the more difficult locations to get to like Shetland and the Hebrides. Once we did those, and a few other far-flung places, it felt like the whole thing would be doable.” 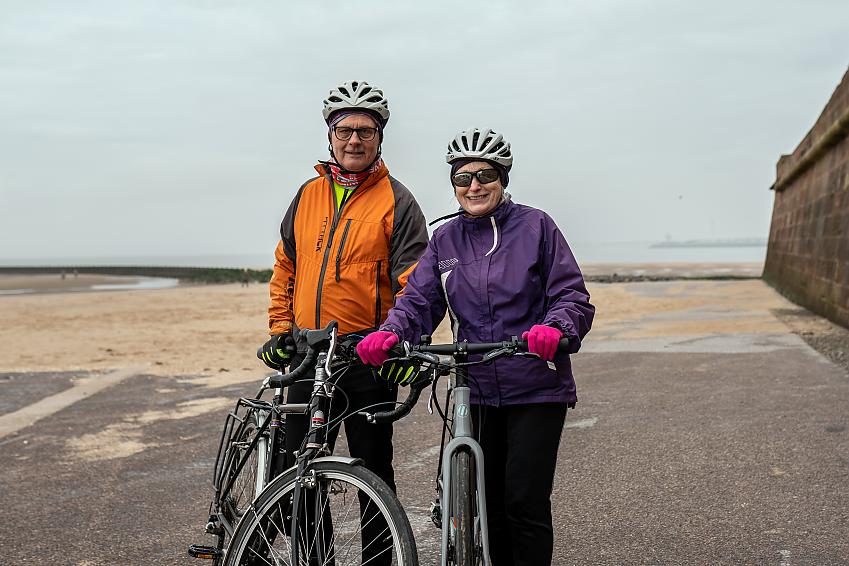 Dan and Christine not far from home for a change on the beach at New Brighton. Photo: Abdullrhman Hassona

Dan continues: “The difficulties were trying to put together routes that were long enough but avoided main roads, which in some cases is not possible, and getting around using the rail network before we had the camper van.”

My overriding thought about the UK as a whole is just how wealthy the country is: every county is full of incredible villages and properties, some places like another world compared to ours!

Where is the best place to cycle?

“Pretty much anywhere in Scotland was the best cycling, especially all the islands. My overriding thought about the UK as a whole is just how wealthy the country is: every county is full of incredible villages and properties, some places like another world compared to ours!”

Having now completed the entire challenge, the energetic couple haven’t decided what they’ll do next. Dan says: “We’re not sure about the next challenge but we did set out to climb every mountain over 2,000 feet in England and Wales. We’re not far off finishing that, but unlike the BCQ, we didn’t do the tough ones first so who knows!”

To take part in BCQ yourself, just take a look at the online map, find your nearest checkpoint – there are six in every county in England, Wales and Scotland – use public transport or cycling to reach it and find the answer to a question about it. Once you have found at least 10 answers, submit them to the volunteer validator and then monitor your progress on our leader board.

We’re also looking for moderators for our British Cycle Quest Facebook group to help post content and keep an eye on users. This is a role that could easily be done from home and would suit people interested in the quest.

There are medals available to purchase for 100, 200 and 300 checkpoints. If you complete all 402 checkpoints like the Mcnamaras, your platinum medal is free!

Congratulations to the other platinum medal awardees in 2022, who included: