This week the Welsh Government announced £38m funding for Local Authorities towards the development of their walking and cycling networks. With the £15m announced last month for temporary infrastructure, this year’s investment is the largest to date and is welcomed by cycle campaigners.

The £38m is a combination of the previously announced Safe Routes in Community of £4.14m, Road Safety Grants of almost £4m and the latest Active Travel Fund of £29m.

Every Local Authority in Wales receives a core allocation from the Active Travel fund based on population and this year 14 Local Authorities share a further £20m for 25 larger projects.

The schemes vary across the country and reflect not only local needs but also local ambition. Cardiff’s bold plans for fully segregated cycle lanes have attracted significant funds. Monmouthshire Council are celebrating their largest award to date and looking to be more ambitious next year as they tackle the challenges of introducing active travel in a more rural environment by taking a whole authority approach with Highways, Countryside Management, Regeneration and other teams working together.

The funding we are making available will create routes and connections in towns and cities across Wales to give people the confidence to continue walking and cycling.

Lee Waters AM, Deputy Minister for the Economy and Transport

Lee Waters, the Deputy Minister for the Economy and Transport said, "Over the last few months, during the lockdown period, we have seen many more people walking and cycling to make everyday journeys. Collectively, the funding we are making available will create routes and connections in towns and cities across Wales to give people the confidence to continue walking and cycling." 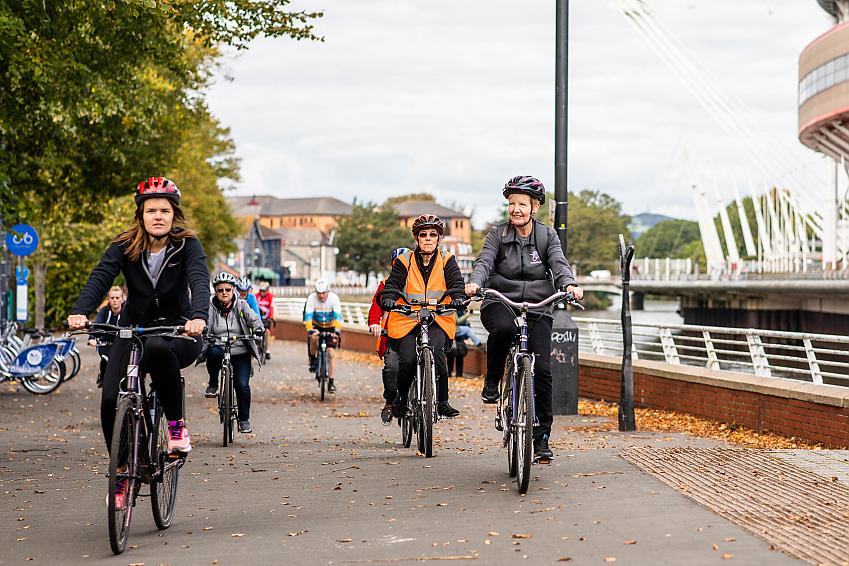 Cycling UK says the increased level of funding is welcome and sees the speed with which some Local Authorities responded to the need to introduce temporary infrastructure as impressive. The cycling charity however believes there must be continued press for sustained and increasing levels of funding if Wales is to address the urgent need for more people to use sustainable forms of transport.

A recent report commissioned by Friends of the Earth Cymru (FOE Cymru) highlights the need for cycle routes in all towns that offer a real alternative to driving and states, "We estimate that to equip a Welsh town that is an employment centre at the convergence of four major roads with parallel cycle routes extending 15km in all directions would cost around £24m."

While Wales may struggle to achieve this level of investment, it is important that organisations like Cycling UK, FOE Cymru and others continue to lobby and campaign for a share of budgets that will allow all Local Authorities in Wales to deliver real change and prioritise active travel.

Next year Local Authorities will have to submit their Integrated Network Maps (INMs) – the plans they have for continuous improvements to the active travel network– to the Welsh Government and it is crucial that the communities which will benefit from these routes help to create the plans.

Too many councils haven’t realised that people want more space for walking and cycling, so it’s really important to let your council know why this matters to you.

Cycling UK's head of campaigns, Duncan Dollimore said, "The reality is that council’s can’t complete those integrated networks overnight, but with some money being made available by the Welsh Government, there’s no excuse for not making a start.

"However, too many councils haven’t realised that people want more space for walking and cycling, so it’s really important to let your council know why this matters to you."

To date, thousands of people have already used Cycling UK's online action to contact their council about the need for cycle lanes and other active travel interventions, with many making proposals or suggestions via the Widen My Path map. Cycling UK has produced a guide on how to use Widen My Path and other tools for people to engage with their council.

The action takes just minutes to contact your council, but you can spend longer and edit the template emails. If you’ve got a few more spare minutes, please share the online action with other people you know.

Getting Wales’ Active Travel Act Back on Track View

Cycling and the Senedd Elections View