One of the world’s top mountain bikers is teaching hundreds of children in the West Midlands how to discover the joys of cycling as part of this summer’s Big Bike Revival.

Hannah Escott has been visiting schools close to her Kidderminster home to teach and inspire youngsters to cycle and give them the benefit of her experience with a series of fun presentations entitled ‘Dare to Achieve?’

Already an experienced international, Hannah heard last Wednesday (10 August) she had been called up to the Great Britain Cycling Team for the 4X (four cross) UCI Mountain Bike World Championships in Val di Sole Trentino, Italy, from 6-11 September. Not bad for someone who was notoriously rubbish at PE in her school years!

In between competing at elite level on the global stage in the 4X, Hannah is helping to get people young and old cycling this summer by working with the Big Bike Revival – a nationwide scheme developed by Cycling UK.

Hundreds of events are being held up and down the country as part of The Big Bike Revival Summer of Cycling, which helps thousands of people to bring their bikes back into use by providing cycle health checks, sharing maintenance knowhow and giving people more confidence in the saddle – helping deprived communities in the process.

Hannah, a Cycling UK member and qualified cycle instructor, has been giving tuition to both novices and more experienced cyclists of all ages as well as motivating youngsters with her ‘Dare to Achieve?’ presentations – which so far have been heard by hundreds of children and teachers at Wilden All Saints CE Primary School in Stourport-on-Severn, Bewdley High School and the RSA Academy, Tipton.

Among her many Big Bike Revival activities, she is teaming up with Wyre Forest District Council Sports Development from today (Tuesday 23 August) until Friday to deliver track cycling coaching sessions for youngsters aged 8-14 at Stourport Sports Club (10am to 1pm).

The 26-year-old Great Britain Cycling Team star said: “The kids have loved the ‘Dare to Achieve?’ presentations. I explained I used to be like many of them, a young girl who cycled to school. I was completely and utterly awful at PE and then there I was a few years later proudly standing in a Great Britain top competing for my country.

“I cycled to school and around town but laughed when my teachers suggested I try mountain biking. Yet, with nothing to lose, I gave it go – and here I am now, an elite 4X mountain bike racer.

“I want to get more young people cycling, especially young women. I also want to motivate and inspire them generally, as hopefully my story shows they can achieve more than they ever thought possible. My message is you can live your dreams if you work hard for them, so make the most of opportunities that come your way.”

I was completely and utterly awful at PE and then there I was a few years later proudly competing for my country. My message is you can live your dreams if you work hard for them.”

At just 5ft tall, the term ‘Pocket Rocket’ must have been dreamt up with Hannah in mind. She needs to be tough mentally and physically to compete at the top level in 4X, a fast off-road sport with huge jumps and drops, which involves four people racing to the finish line. Contact is allowed, which makes it a dog-eat-dog, high-risk activity, and, ranked in the world top five, Hannah is obviously pretty good at it!

She added: “When I visited Wilden All Saints CE Primary School, I got some of the children to wear small GB tops, pads, body armour and helmets, gave them a pair of handlebars each to hold and then we pretended to have a 4X race – starting out of the gate, steering and bouncing up and down as if there were jumps. They had great fun.”

For anyone interested in seeing the real thing, Hannah was interviewed and shown racing on BBC2’s The Adventure Show on 31 July, in a feature on the UCI Mountain Bike World Cup at Aonach Mor, near Fort William in Scotland.

Hannah, who runs her own company, Open Trail, has passed her British Cycling Level 2 coaching course and is a Mountain Bike Leader level 2. She is a qualified Bikeability instructor, Learn To Ride instructor and Ride Leader as well.

As a previous volunteer at Spokes, the bike recycling centre in Kidderminster, Hannah has been working with the organisation to help dust off people’s bikes and get them set for cycling as part of the Bike Bike Revival. She is also teaming up with Wyre Forest District Council Sports Development to deliver track cycling coaching sessions for youngsters aged 8-14 at Stourport Sports Club from today (Tuesday 23 August) to Friday 26 August (10am to 1pm).

As if her schedule wasn’t busy enough already, Hannah also works as a Sustainable Travel Officer in the cycling and walking team for West Midlands Combined Authority in Birmingham, which is responsible for the delivery of public transport in the West Midlands, representing seven metropolitan councils – Birmingham, Coventry, Dudley, Sandwell, Solihull, Walsall and Wolverhampton.

Hannah added: “Through the Big Bike Revival, I want to target people who have an urge to cycle but need a push in the right direction. As well as motivating children to cycle, I’ve been teaching adults how to ride and cycle confidently on the road so they can make shorter journeys by bike rather than using their cars.

“I’ve also given playground and off-road cycle coaching and held bike maintenance sessions, as well as giving the ‘Dare to Achieve’ presentations. It’s all about getting people to make cycling a normal part of their everyday lives.”

Cycling UK Development Director Ian Richardson said: “So many of us can instantly remember our first bike as a child and the freedom and fun it brought. The Big Bike Revival is the perfect way to bring that fun and freedom back into your life today and we’re delighted that someone with Hannah’s cycling pedigree is helping us achieve that.

“The Big Bike Revival programme has also reached into communities challenged by multiple deprivation, where access to a bike can unlock greater employment opportunities and provide transport savings and low-cost exercise.”

Below: Hannah with students at the RSA Academy, Tipton 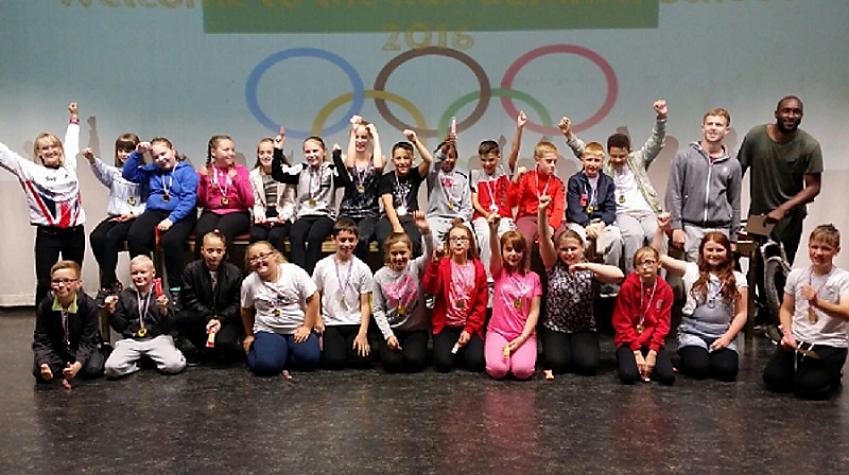