Bright front lights are better than ever
By mattlamy
Thursday, 21 September 2017

Powerful, reliable, and longer lasting, battery bicycle lights have come a long way in the last couple of decades. So bright are most of today’s LED front lights that some form of switched reduction in light output is a desirable feature, not just to save power and extend run time, but to allow the light to be dipped when used on unlit roads.

‘Dipped’ isn’t quite the right word; with the lights on test, there’s no change in beam direction or angle as the light switches to a dimmer mode. In any case, the light should be angled to avoid dazzling oncoming road users even on maximum power; this will have the further benefit of casting the beam on the road ahead.

Along with vastly increased run time from batteries speedily rechargeable through a USB port, the best of current bike lights are made to last, with sturdy exteriors and weather proofing. Even the lowest-powered light on test provided effective illumination on unlit back roads.

When cycling at night, you’re legally required to have approved white front and red rear lights, as well as a red rear reflector and amber pedal reflectors. To find out more about the law read our lighting regulations page. 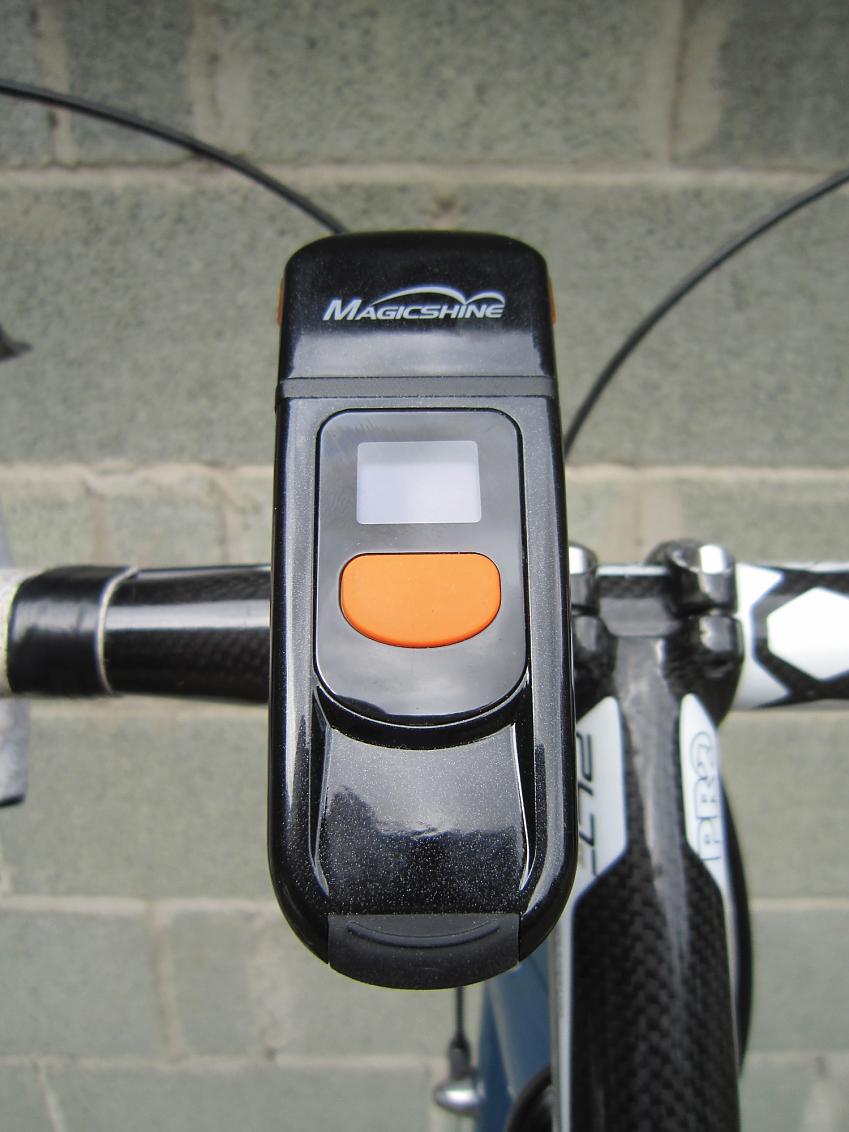 This feature-packed light may boast just 600 lumens on maximum power, but its well-focused central zone provides sufficient illumination, without a lot of spread, for brisk riding on unlit back roads. Side-mounted orange lenses aid visibility. A display on the top gives remaining battery life and power setting (of four, plus flashing mode). The screw-tightened clamp is a neat but complex affair, with three straps provided to accommodate various handlebar diameters. A thumb lever operates the quick release, which has push-to-click installation. The switch is more of a flat pad than a protruding button and requires a firm press. Supplied with USB charge cable only. Runs 1.5hr on max, 10hr on min. 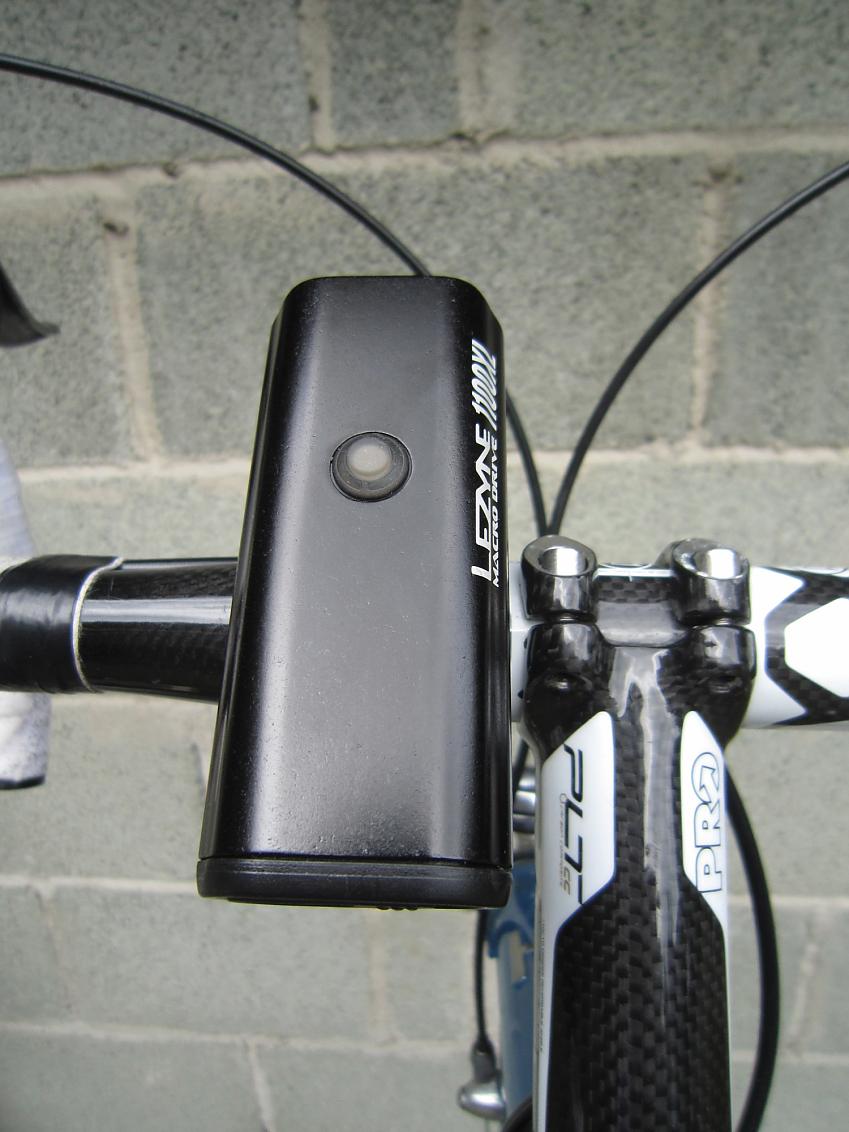 Secured with a ladder-type rubber strap that requires a good tug to pull over a 31.8mm handlebar bulge, the Macro Drive 1100XL wallops out 1,100 lumens on the maximum ‘Overdrive’ setting and 650 in ‘Blast’. Six outputs are available, including a pulse setting that ebbs and flows disconcertingly. There’s also a timesaving mode that switches between Overdrive and Economy only. Although it feels weighty in the hand, it is only 155g. The protruding switch button is easily felt and requires little pressure to operate. The beam has a well-focused central zone with gently diffused surround and lateral cutaways let the lens shed light to the sides. Supplied with USB charge cable only. Runs 1.25hr on max, 16hr on min. 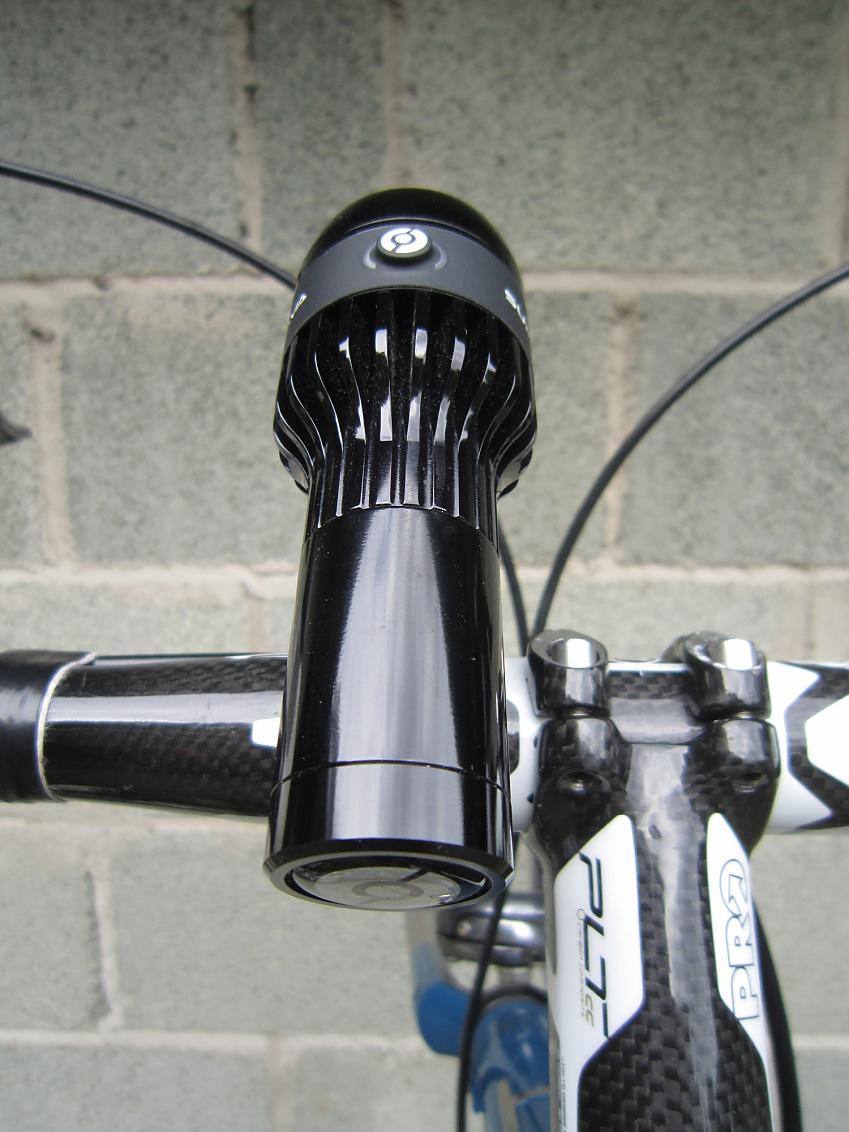 Something of an outlier in this test, the 165g Airstream puts out a comparatively meagre 205 lumens and has no flashing mode. It is built to comply with German lighting regulations and has a distinctive, effective beam pattern that, to avoid dazzling other road users, sheds very little light above the centre. It has a broad central patch and gives diffuse illumination of the foreground. Side illumination is provided by light shining through the lettering on the lens surround. The charge port is on the underside of the lens surround and is covered in use by a rubber cap which, lacking a strap connecting it to the light body, looks easily lost. The top-mounted switch button is well-defined and requires a fairly soft touch to operate. The light is secured effectively using a beefy rubber O-ring with moulded tongue that hooks over a machined aluminium bracket. The O-ring is perhaps a little too beefy, needing excessive effort to pull tightly enough to hook over the bracket. Runs 2.5hr on max, 14hr on min.

VERDICT: Low-powered but effective and beautifully made. 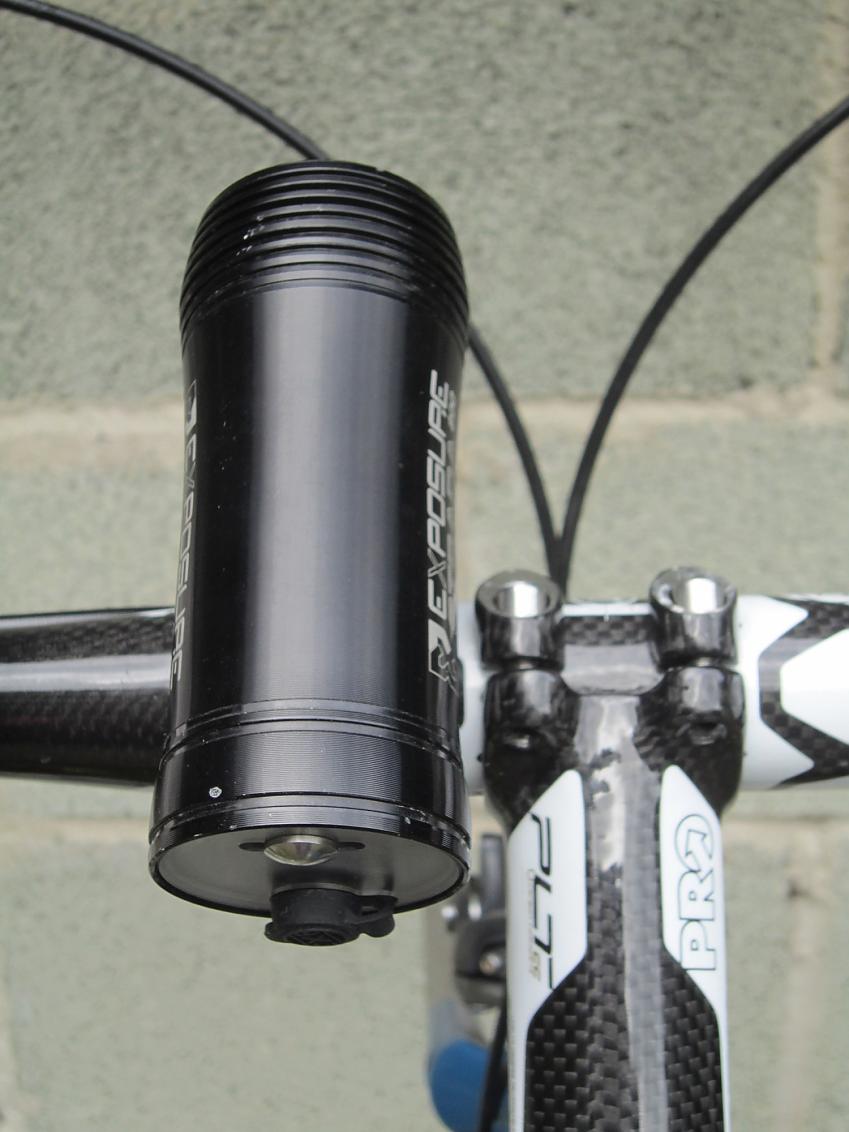 Built to Exposure’s usual high standard and weighing 185g, the Strada 800 belts out up to 800 lumens in one of four intensity settings, plus an off-beat ‘DayBright’ flashing or ‘pulse’ mode that is claimed to be visible from a kilometre distant. The circular beam is mostly diffuse with a well-defined central zone; a lot of light is cast upwards, making use of the dimmer settings highly advisable where appropriate. Small cutaways in the lens periphery allow overspill to provide side lighting. Sited on the back of the light, the switch button is easily felt with gloves. A small display gives remaining run time, backed up by green to red warning lights. Runs 3hr on max, 36hr on min.

VERDICT: Expensive, but you get what you pay for.

Somewhere around 800 lumens on maximum setting seems to be the de facto standard and should be enough for 25mph/40kph riding on unlit roads. Side illumination helps make the user visible to other road users, especially when waiting at or leaving a side junction.

Ideally, it should be possible to feel and operate the switch button while wearing thick winter gloves.

The more, the merrier, right? Maybe not; the lights tested all scroll through settings successively, so getting back to max will take more time and effort the more settings are involved.

Careful lens and reflector design casts the light in a more useful spread. The beam may be diffuse, covering a large area fairly uniformly, or focused so that some part of the foreground is brighter lit.

A big rubber band pulled around the handlebar is quick and easy to use but a screwed clamp is more secure and, if provided with a quick-release fixture, even faster and more convenient to use. The attachment system should hold the light firmly enough to prevent movement from vibration.

A longer run time is better, of course, and it will vary with light output. Run time at high output will be important if used on unlit roads. All lights on test can be recharged from a computer’s USB port. A traditional plug-type charger is a useful additional feature.

Why I love night riding View