Why I love night riding

Why I love night riding

What is night riding really like? Cycling UK's Julie Rand loves riding off-road after work all year round.

I’m swooping through the woods on my mountain bike when a ghostly white shape silently soars out of the trees and flies along the trail in front of me, before disappearing again as stealthily as it appeared. Minutes later, a loud rustling noise in the undergrowth betrays the presence of a mammal of some kind, roused by the sudden bright light shining in its direction.

The woods mostly hide their secrets once night falls but sometimes they reveal things rarely seen or heard in daylight hours: the hooting of owls and the sweet song of nightingales and nightjars, and occasional glimpses of deer and badgers. On summer evenings, bats skim low overhead, their eyebrow-shaped silhouettes black against the darkening amber sky.

Some people think riding off-road in the dark is mad often asking: "Isn’t it dangerous? How can you see where you’re going and what on earth is there to see at night anyway?" First of all, today’s good quality lights can transform the trails so they’re almost as bright as in daylight – in fact, sometimes even brighter as the dark shadows in the woods disappear in their glare. As long as you can see any obstacles directly in front of you, it doesn’t matter too much about seeing the bigger picture.

But, it’s not only the wildlife you see or conquering the trails that is part of the unique night riding experience. We’ve heard a Chinook helicopter clattering towards us from a distant sky, lights dimmed, then seen it land a few hundred metres away in an army training zone, the pilots probably amazed as much by our presence on the ridge above as we were by theirs.

On a clear night, you can sometimes see the International Space Station flicker into view then suddenly disappear again to carry on its interminable voyage of circumference around the globe. Then there’s shooting stars to make wishes on, if you happen to be looking in the right direction, of course, and bright planets that appear on the horizon as the sun dips below it. Sometimes there are manmade objects as well, such as Chinese lanterns and fireworks, which double as UFOs if you’re imaginative or have bad eyesight like me!

Often, we’ll stop at a particular viewpoint and turn off all our lights in order to savour the pitch blackness – even in Surrey, it’s possible to find places far away from large towns and villages. But after a few minutes of readjustment, you can make out the shapes of distant hills, rendered strange and unfamiliar by their cloak of darkness. Even the views of suburbia are more spectacular viewed at night from above, a galaxy of streetlights sparkling away on a world busy with the mundane business of everyday lives, sirens blaring and far-off horns beeping.

With vision mostly limited to just a few metres in front of you, your other senses are heightened. The smell of damp earth is surprisingly sweet and pleasant, as is the odour of wood smoke hanging in the evening air. On summer evenings, there’s also the heady scent of wild flowers in the hedgerows and freshly-mown grass as you zoom past.

On the rare occasions there’s a full moon on a night ride, the atmosphere is even more magical - the sky becomes luminous and lakes and streams gleam in its reflection.

On the rare occasions there’s a full moon on a night ride, the atmosphere is even more magical - the sky becomes luminous and lakes and streams gleam in its reflection. Seeing a huge moon rising slowly above the horizon then catching glimpses of it through the trees as we weave in and out of them are some of my favourite things about going out riding in the evening.

In the summer, of course, there’s more daylight to play with and stunning sunsets turn the sky blood red, leaving a distant glow towards the west that never totally disappears – something you’ll only experience in the South of England if you venture off the sofa to go out adventuring in the countryside of an evening – something surprisingly few people seem to do.

Increasingly, it’s sometimes possible to pick out a set of bright lights bobbing ever nearer and you realise it’s another bunch of nocturnal adventurers out a-wheel. A few years ago, we rarely met other cycling groups or individuals out after dark but much cheaper and better lights mean it’s not so uncommon now.

People wonder, isn’t it scary out in the middle of nowhere after dark? It’s true that sometimes you might feel a frisson of danger not present in daylight, a feeling of mild peril perhaps - and occasionally a 'Blair Witch Project'-type moment when you might feel a bit lost and the thought that hey, haven't we been past that tree before? However, that makes it all the more intoxicating, as you feel in touch with a more primitive time before civilisation removed us from exposure to the wild.

There’s something extra exciting about being out in the middle of nowhere knowing that everybody else is most probably glued to a TV or phone screen somewhere, oblivious to the real world and its enticements.

Granted, Surrey is hardly the wilds of Siberia and you’re never really that far from safety but it’s thrilling nonetheless to feel a reckless sense of adventure when gazing out at the stars from the top of a hillside, the wind rustling in the trees and making you feel completely alive. And there's always GPS devices to get you out of real trouble... 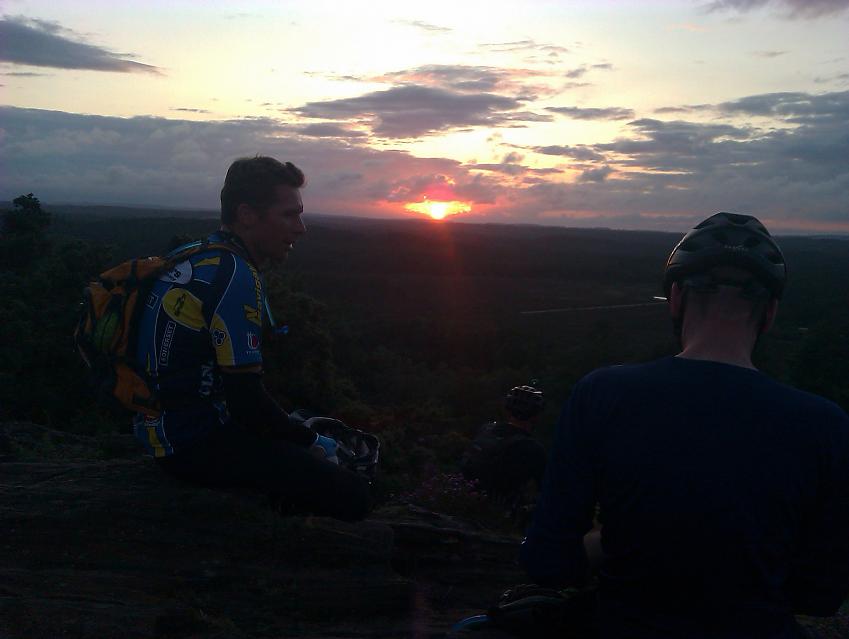 A summer sunset seen from the Surrey Hills

One memorable evening, I rode ten miles home alone after the traditional pub visit as a massive thunderstorm rumbled ominously around over the South Downs on the horizon, tremendous streaks of lightning flashing in the sky. As I reached the final stretch of the towpath to home, the lightning was more or less directly overhead and enormous drops of rain started to fall just as I put the bike away in the shed - a narrow escape!

In the autumn, there are sometimes mists swirling around, adding to the spooky feelings, and, on one memorable occasion, a hoar frost decorated the canal side trees with a glittery coating as we rode home to a warm bath and bed. In winter, dusk comes earlier and with it low-lying mist and drizzle, and, finally, the colder nights with their crisp frosts and clouds of breath.

For many, that means their evening forays coming to an end for another year but, unless you really loathe the cold, winter night rides can be some of the most exhilarating – the trees are now bare of leaf, meaning the views are more open and interesting, while the weather, at least in this corner of the UK, can be cold and dry, making the trails easier and faster to ride. And, of course, a pub with a blazing log fire to defrost in is even more welcome. it’s worth wrapping up in a few extra layers and setting forth – you’ll soon warm up with the effort of pedalling and forget Jack Frost nipping at your toes.

This freedom to hit the trails hard, knowing that you’re almost certainly the only ones on it is exhilarating. You seem to go faster in the dark, the unknown adding an extra element of adrenalin and risk.  Familiar trails look different, you have to concentrate extra hard to recognise and spot the twists and turns in them and to navigate when you can only see a few metres ahead.

And there’s nothing like coming home again after two or three hours of adrenalin-fuelled entertainment and luxuriating in a hot bath with a nice cup of tea as the stings and scratches gradually subside. It takes a while to get the heart rate back to normal and sleep can be hard to find. Although next day, you might feel a little bit tired and perhaps have a few new bumps and bruises on your arms and legs, you’ll carry with you the memory of the wonderful evening the night before. Game of Thrones might have passed you by or the latest episode of Bake Off but there’s always catch up!

Why not try it?

People ask me why I go night riding - they can’t begin to understand why or how you can enjoy riding in the dusk and dark. Why can you enjoy it if you can’t see where you’re going? Isn’t it dangerous? What if something goes wrong? I say switch off the TV, cancel the book club, get some suitable lights and give it a try, you will be amazed at how different and fun it is. And once the bug hits you, you’ll never be scared of being out in the dark again!

If you fancy giving night riding a go, find your nearest Cycling UK group and see if they organise anything either on or off-road. If they don't you can always set up your own group or try a local bike shop – often there’ll be a ride out once a week if there’s suitable terrain nearby – or check our Events Guide.

How to: Keep cycling through the winter View

How to have an awesome autumn with Cycling UK View

Six of the best Halloween costumes for cyclists View

...haven't we been past that

...haven't we been past that tree before?

Or the same bench perhaps!

Ok, Sam yes maybe we were a teeny weeny little bit lost...but your Garmin was pointing us in the wrong direction too!

"Why I love night riding"

Well done Julie on an excellent article that epitomises everything I enjoy about this experience.  Next time someone looks me in the eye and says "why on earth would you want to do that?" I will wave this article under their nose!

Thanks Mick, I appreciate you taking the time to say so and glad you enjoyed it. Happy night riding!