Ed and Marion Shoote cycled through the Pamir Mountains
By Anonymous
Friday, 28 April 2017

Roads more than 4,000 metres above sea level wind through the Pamir Mountains. In the past they carried silk; more recently, they also carried cyclists Ed Shoote and wife Marion.

We were riding into the middle of nowhere, a stone-skimming distance across the river from Afghanistan. Shadows were lengthening; it was time to camp. As we cycled, a cloud of dust approached on the Afghan side: horsemen. Why were they riding out here, miles from any civilisation? This valley is one of the most notorious drug trafficking routes in the world, and our tired minds immediately thought the worst. All of a sudden, it felt ridiculous to be riding a bike here.

We camped discreetly out of sight of the track and the river, warming up with hot pasta as the last golden rays of sunlight disappeared across the arid landscape of the Wakhan mountains. Then we turned in. 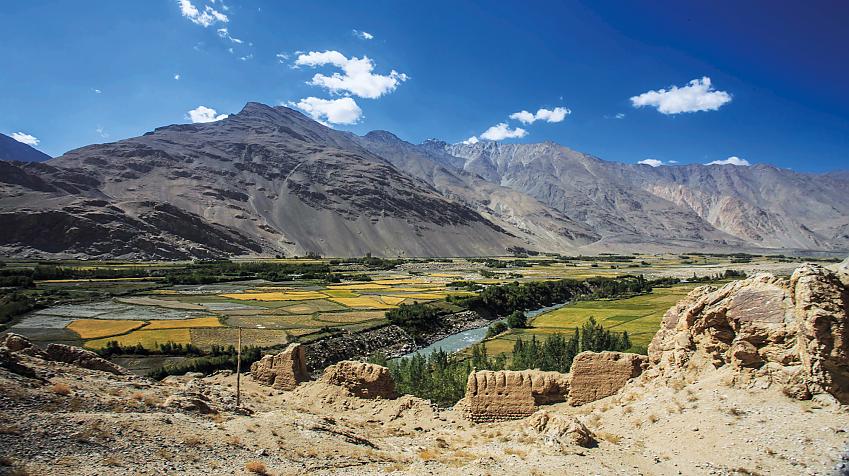 Above: The Wakhan Valley

‘Shh!’ Marion whispered. We sat bolt upright in our sleeping bags. The noise of hooves and splashing water had woken us. Was it those horsemen ambushing us in the night? Maybe Taliban fleeing across the border?

We peered nervously out from the tent door, making out five odd lurching shapes in the moonlight. As they made their way across the floodplain, we realised those scary silhouettes were merely a group of Bactrian camels out for a night-time stroll. 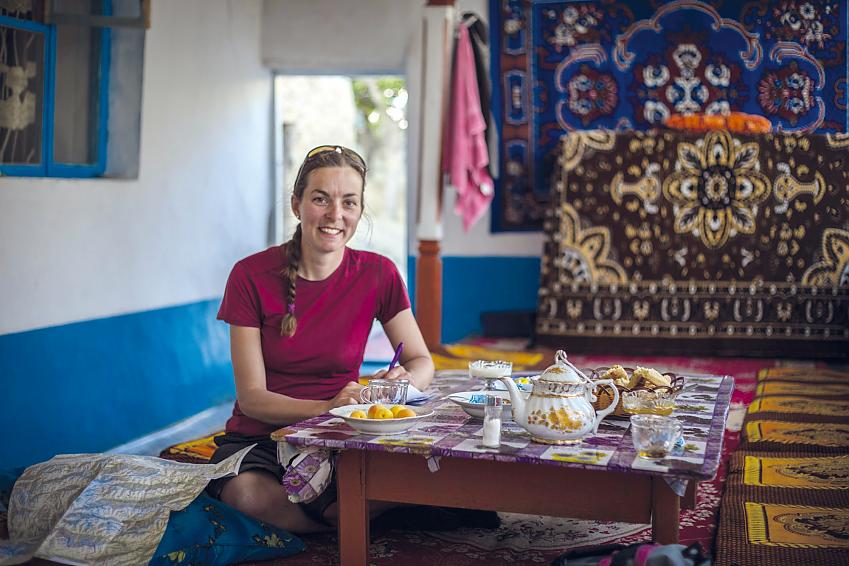 Above: Marion, food wasn't a problem. Altitude was.

A huge crash announced our bike boxes arriving onto the floor at Osh International Airport. Luckily they were carefully wrapped, because next they were shoved into a taxi, a small Hyundai estate. It was 3.30am and our driver stank of booze. Myself and Marion were squeezed onto the front seat, with a leg slap at each gear change, while in the back a French woman contorted herself around the bike boxes. At least 30cm of box was sticking out of the boot and the tailgate crashed down at each bump in the road. However, by 4am we were camping in a hostel garden in Osh, the ancient Silk Road city that’s older than Rome and more Soviet than Moscow.

This trip was an unknown. We were heading on cyclocross-style bikes to an area of the world most governments advise against, an area currently cut off to vehicles due to flooding and landslides. Our back-up route was to detour and follow the heavily-guarded Afghanistan border for days. Taking that detour, we both had a twinge of nerves as we rode out from Osh the next day.

First we headed towards the Kyrgyz village of Sary Tash, deep in the Altai Mountains. Day one was a good introduction to the region, kids in every village shouting, "’ello,’ello" and running at us for nothing more than high fives, before adults invited us in for chai and sweets. We rolled up to a rickety old village store to buy some bread and while we sat outside, a young lady brought a plate of apples, biscuits and dried cheese balls. She spoke great English and told us she was studying international law at a Chinese university. It’s dangerous to make assumptions about people out here! At first, the excessive friendliness is disconcerting for a Westerner but, like the landscape, it was only a warm-up for what was to come. 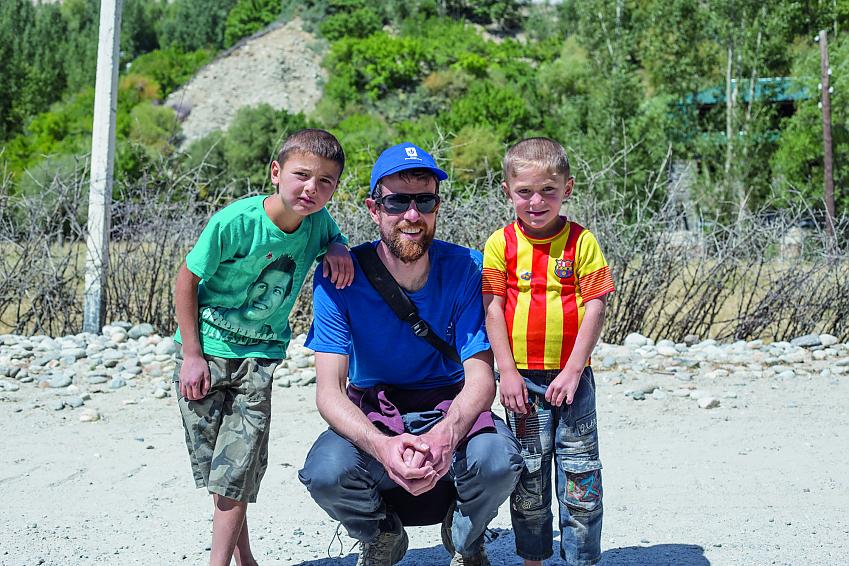 Above: Ed with friendly locals

As we cycled into the mountains, jagged peaks and ridges in exotic mineral shades appeared. These peaks became higher and higher as we slogged up and into a headwind. The challenge of the first serious pass of the tour approached us. At 3,600 metres, we’d later think of it as low, but its steep hairpins were anything but easy.

We needed to acclimatise so took a day off to hike and get used to breathing the thin air. The view across the vast steppe had the colossal, glaciated 7,000m peaks of the Pamirs as a backdrop. Somewhere among those mountains was a ‘road’ that wound its way ever higher into the sky. That’s where we were headed.

There was very little traffic except for the occasional overloaded jeep. We saw a couple of hitch-hikers coming from Tajikistan who had waited four days for a ride. From them we learnt that the road to Khorugh was still impassable, but on bikes we could probably take a boat across the flooded river, then hike across a steep scree slope that was above the raging water, and reach the road again lower down. It didn’t sound appealing but we set forth regardless, knowing now we would probably have to ride to the Afghan border. First, we would cross the high, barren Pamir Plateau. 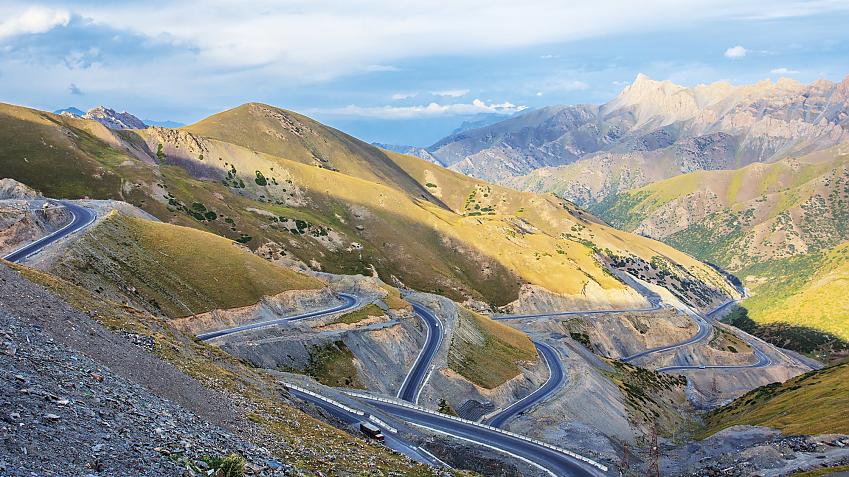 Above: Taldyk Pass, the first test

The dirt road past the Tajikistan border twisted its tortuous way up into the Pamir Mountains. It met and exceeded our expectations: rough, tough and unbelievably beautiful. Not loose enough for a mountain bike but perfect for the ’cross bikes to tackle. As the altitude ramped up and the road got steeper, my nose started to drip steadily with blood. Stuffed with tissue, I looked on towards Peak Lenin’s tumbling glaciers and saw an eagle swoop, struggling to get lift with its heavy wings. Moments like this were why we came here and why we carried on up and up.

Finally, we crested the first 4,300m pass and descended to the high Pamir Plateau. It’s a harsh but rewarding place, a huge wilderness over 4,000m up. Marco Polo described it well 750 years ago: "The plain is called PAMIER, and you ride across it for 12 days, finding nothing but a desert without habitations or any green thing, so that travellers are obliged to carry with them whatever they have need of. The region is so lofty and cold that you do not even see any birds flying… fire does not burn so brightly."

As the altitude ramped up and the road got steeper, my nose started to drip steadily with blood.

Signs of life are still scarce here today. We saw three or four cars a day and passed one small village in the first 270km. We camped by the beautiful azure Lake Karakul, which was created by a huge meteor strike. There’s no outflow, so it’s pretty salty. In the afternoons, the headwinds picked up, blasting sand in our faces and slowing our progress. This place is bleaker than bleak but certainly unforgettable.

With so little water and shelter, you feel vulnerable riding a bike; a mechanical fault here really could be disastrous. On our final day up high, we stayed in a nomad’s yurt. The father of the family was washing freshly skinned and bloody goat heads as we arrived. Our meal that evening was anything but vegetarian.

It was now decision time: carry straight on and discover if the landslide was passable or head to Afghanistan the long way round...

The road to Afghanistan

From the high plateau, we bade farewell to the arid desolation and detoured towards the Wakhan Valley, a finger of land stretching to China between Pakistan and Tajikistan. Our frustratingly sandy ‘road’ meant some off-the-bike pushing, but finally we crested another pass and lost height towards the Panj River. The snowy peaks of the Afghan mountains loomed large on the horizon. 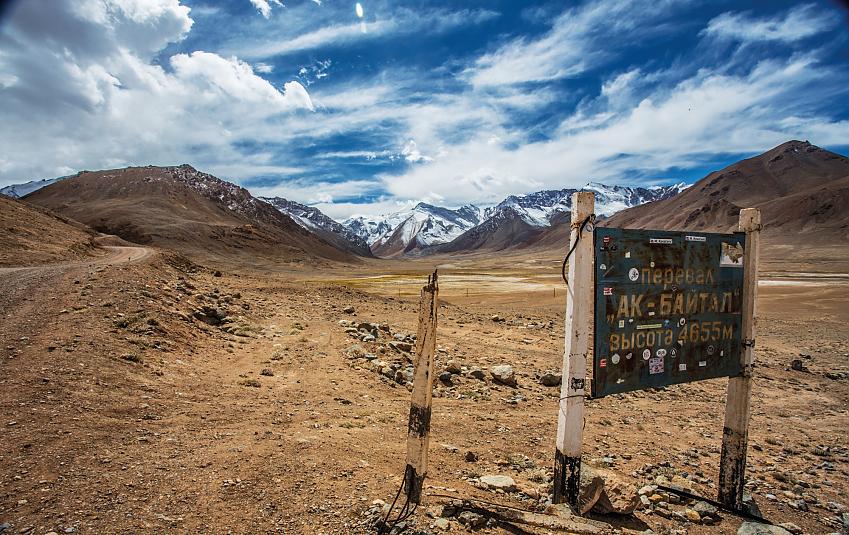 At the bottom there was an isolated military checkpoint, complete with tank. We handed over passports and, after confirming we had no cigarettes or iPod headphones to donate, carried on.

For the next five days, we rode only yards from Afghanistan, waving at friendly villagers across the river. We tried not to imagine any Taliban fighters. It was on the first night camping on the border that we saw the Bactrian camels crossing the river.

This is an area of the world that felt worth the risk to explore, with friendly locals and jaw-dropping views of the Hindu Kush in Pakistan. Here ancient castles stand atop of ridges, while Buddhist stupas, weird sheep shrines, and small mosques attest to the varied civilisations that have taken root here. We were just the latest in centuries of Silk Road travellers to soak our tired legs in Garam Chashma’s hot springs and eat the fresh fruit in what was a welcome oasis. 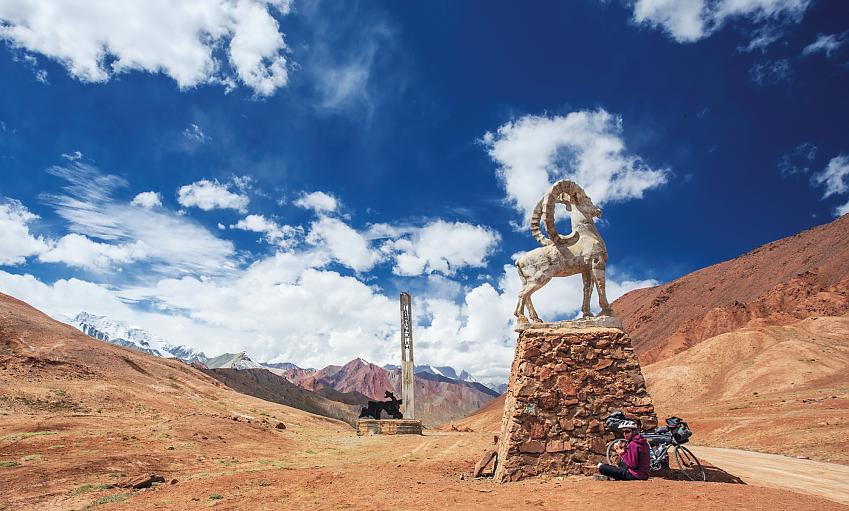 Above: At the Tajikistan border

The roads on the Tajik side of the river were rough gravel and occasional deep sand. Progress was slow. On the Afghan side, we saw groups of horsemen riding along a narrow footpath.

The end in sight

The last stretch to Khorugh had far more soldiers present. On the Afghan side, they were using nets to fish, wearing just their pants. Their AK47s were lying on the banks with a solitary guard.

At one lunch spot, we boiled eggs in the shade and eight armed soldiers jumped out of the bushes and ran up the road. It was very odd, but no one took any interest in us other than a wave to say hello.

We were happy to learn that by now the landslide on the main road back had been cleared. Arriving at Khorugh, we had reached the furthest point from Osh so it was now only a matter of getting home again. We just had to cross six passes over 4,000m...

The Roof of the World fact file:

Distance: We covered 1,400km in three weeks, with the detour to the Wakhan. We ended up running out of time to get back to Osh.

Route: The route we rode heads out along the M41 road towards Khorugh before detouring into the Wakhan valley. Easier options to ride and avoid the Gorno-Badakhshan Autonomous Oblast (GBAO) area would involve looping from Osh to Song Kul or Issyk Kul in Kyrgyzstan.

Conditions: It is generally dry, warm and sunny from June to September in the Pamir. Traffic is virtually non-existant outside the major towns. Roads vary from smooth to very rough.

Bike used: I rode a Kinesis Tripster ATR, with bikepacking bags from Apidura. It was perfect on the varied surfaces. The gravel roads mean a tyre wider than 32mm is necessary. Take all the spares you might need.

I’m glad I had: Good sun block for the altitude and a down jacket for the nights.

Next time I would: Have a full day off soaking in the hot springs.

Further info: Check out pamirs.org/cycling.htm for a wealth of blogs. There’s a link there to our own, at welovemountains.net.

Getting to Kyrgyzstan with a bike is easiest with Turkish Airlines who fly into Osh and Bishkek via Istanbul. The other option is S7 or Aeroflot via Moscow, which is longer. For Bishkek, you have the option of Turkish budget airline Pegasus.

Kyrgyzstan is visa free for British passport holders and easy for travel. Tourism to the country is growing and facilities are improving. Tajikistan is more of a challenge; you need a visa in advance. The autonomous GBAO/Pamir area requires a special permit, which is most easily obtained in London.

The FCO currently advises against all but essential travel to the GBAO region. This makes 99% of travel insurance invalid; we used British Mountaineering Council cover.

For a guide to offroad/dirt road touring read our Guide to Bikepacking.