It was a once-in-a-lifetime opportunity to spend two weeks cycle-camping with my brother in southern Argentina and Chile. Reality usually gets in the way of such fantastical plans. But we did it, and we took the chance to cross the Andes by mountain bike, using one of the old trading routes largely undiscovered by tourism. A few months have passed since the trip, but an extract from the journal I kept reminds me of the hard-earned rewards of such adventures…

"The dirt road became a forest path and we encountered a small group of people leading two oxen. The guy at the back introduced himself as Elias. He said he lived in the last house in Chile, next to the lake forming the pass into Argentina, and we could stay the night there. He would join us once his work was done. The heat began to build again, and the horseflies started to take an interest in our sweat soaked bodies. 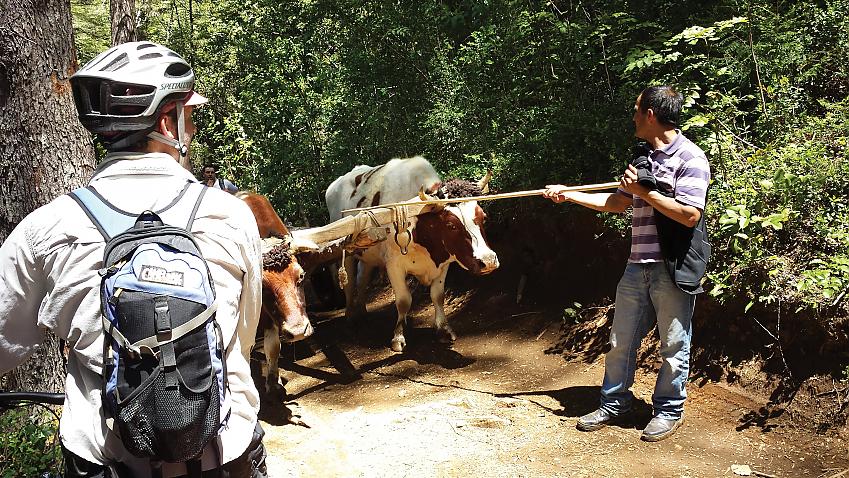 The encounter with oxen

"We unloaded the bikes to cross a rickety wooden bridge. A small, fading, hand-painted sign propped against a rock told us we were on the right path. The river ran alongside us, deep turquoise waters. We were on the lookout for Elias’s house, and finally we came to what seemed like the one. We broke out our cooker and ate. That was better!

Heaven, or rather Argentina, was on the other side.

"As dusk fell, Elias reappeared, his energy undiminished by the day’s exertions. He led us into his self-built house. He was more than generous. He cooked on the wood-fired stove. We drank beer and heard stories of his life. He radioed through to the border police ready for tomorrow. We went down to the lakeside and took in the incredible evening light across the water… Heaven, or rather Argentina, was on the other side."

Do you have a tale to tell?

Travellers' Tales are first published in Cycle magazine, if you would like to share your cycling story email cycle@jamespembrokemedia.co.uk.