Cat Dixon was one of Cycling UK’s 100 Women in Cycling in 2020. Dan Joyce spoke to both her and Stoker Raz about their record-breaking round-the-world tandem ride

Any round-the-world record attempt is a race against time. For tandemists Cat Dixon and Raz Marsden there was the added pressure of impending lockdowns. They caught the penultimate passenger ferry from Caen, France, to the UK, completing their circumnavigation in Oxford on 18 March.

Their time of 263 days 8 hours and 7 minutes broke the men’s record by more than 17 days, as well as setting a new women’s record.

“It was a bit of a dash across Europe,” Cat admits. “We got out of France on the day the country locked down. Guinness set a minimum of 18,000 miles, which we’d done before crossing the Channel, but the travel ban would’ve been hugely problematic for us: you couldn’t exercise together.”

On a tandem, they’d have been stuck. They almost were anyway: their ferry tickets were for the following Saturday. “We just turned up at the port,” says Raz. “Fortunately, because we didn’t have a motor vehicle, they could fit us on with the bike.”

The bike was ‘Alice’, a customised Orbit Summit from JD Tandems. Why Alice? “Our club, Cowley Road Condors in Oxford, had a competition to name the bike,” Raz explains.

“Alice was suggested because it stands for, I think, Awesome Ladies In Cycling Extravaganza. Plus, there’s ‘Alice Through The Looking Glass’; Lewis Carroll was from Oxford. So it all works.” 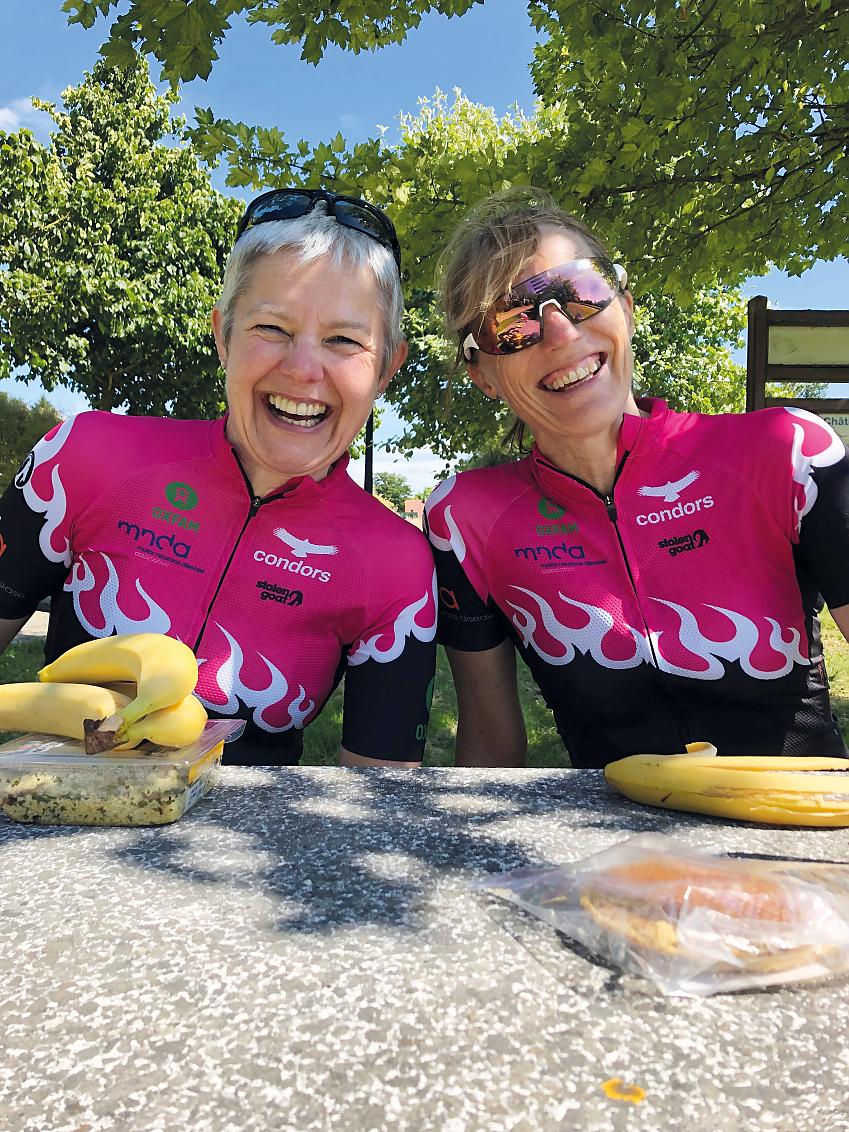 Cat and Raz on a well-earned refuel stop

Riding a tandem – especially when doing 100-mile days for months – requires camaraderie. Even via video chat, it’s clear that Cat and Raz have that: they finish each other’s sentences and there’s gentle banter. (Raz, grinning: “I’m taller than Cat, obviously.” Cat, wryly: “She’s not, actually.”) So it’s a surprise to discover they only began riding together three years ago.

“We met when we were cycling from London to Paris for charity,” says Cat. “Then we started riding together – things like the Étape, Liège-Bastogne-Liège. We started talking about an adventure, and I’d always had this ambition to cycle around the world. It turned into ‘why not on a tandem?’”

Riding a tandem meant they could go for the world record without competing with one another on solo bikes. “It was great,” Cat says. “The teamwork, riding together… it’s good fun. But it’s hard work. A tandem is a big, heavy bike.”

That was most evident on climbs – and there were some long ones. Raz says: “One day we spent about 50 kilometres–” 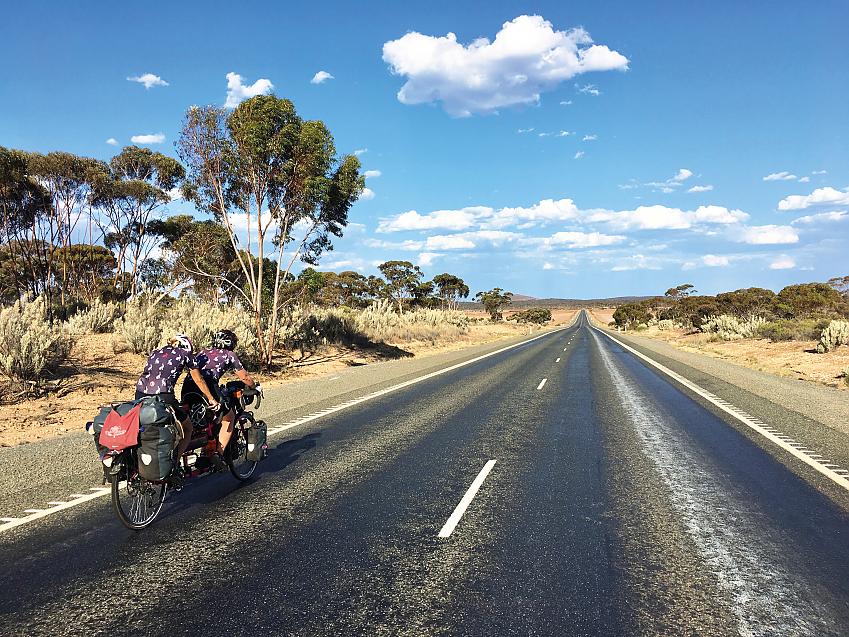 Cat and Raz on Alice in action

They rode across Australia in 45-50º heat, into a desert headwind, covered in flies. Raz says: “Going eight, nine miles an hour is fine until you do the maths and think: ‘We’re going to be doing this for 10, 11 hours.’ So you don’t count the hours. You just go.”

Their demanding schedule didn’t stop them enjoying the trip. “Every day was a different adventure,” says Cat. “We went through some fantastic places. I loved Italy; it was like being a tourist. The Croatian coast was amazing. India was just madness. Big Sur in America was beautiful. Crossing the Anza-Borrega desert, you saw the hummingbird, Raz.”

“It was so delicate and tiny,” says Raz, “and right beside us on a flower. We stood transfixed for about 10 minutes watching it. It was fantastic. That was a highlight.”

Cat and Raz will be in the 2021 edition of the Guinness World Records. They might appear again in the 2022 book. Cat is coy but talks about higher-intensity speed training. 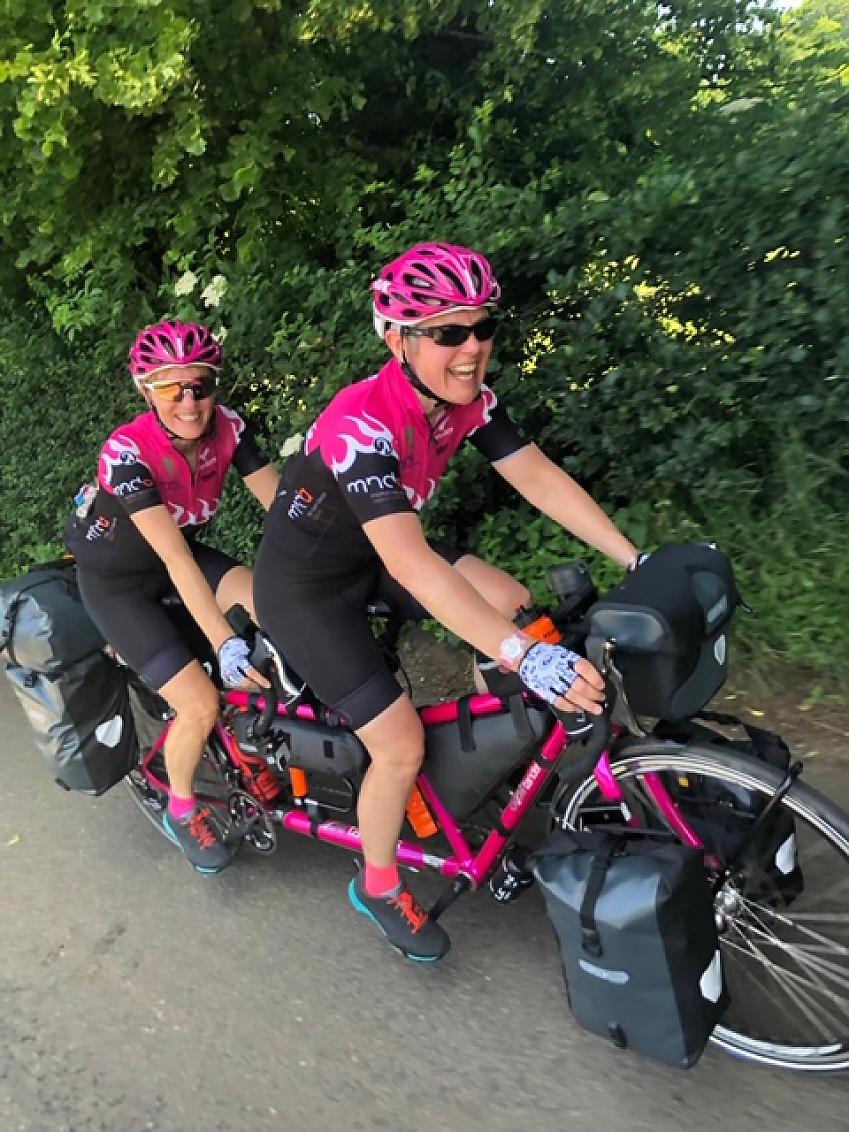