Cycling UK’s latest long-distance route is a 370km loop around Norfolk. Taylor Doyle was one of its inaugural riders last summer

Jessie and I were looking through a window to the past. A piece of clear acetate had been framed in front of an empty field, with a drawing of Venta Icenorum, the capital of Boudicca’s Iceni tribe, overlaying the modern landscape. We were five miles into Cycling UK’s latest long-distance route, which takes you through the history and landscape of Norfolk.

The Rebellion Way is named for two East Anglian uprisings: Boudicca’s against Roman rule and rapacity in 61AD; and Robert Kett’s in the 16th century. Kett fought against the enclosure of common land by wealthy landowners, an issue that still resonates today in the shape of discussions about public land access, rights of way, and who gets to enjoy these spaces.

The route is a mix of quiet lanes, bridleways, forest tracks, rail trails and singletrack. It’s relatively flat, of course, but there’s no shortage of historical sites, ruined churches and castles, charming towns, and tempting cafés, pubs and tearooms. It’s a well-curated path of surprises.

From Venta Icenorum, a sunny lane with little traffic took us further away from Norwich. We stopped again at an old ruined church called St Mary’s. You could get right into the middle of it and gaze up at its tall, windowless walls. We weathered a spot of rain here, sheltering under an archway.

The first off-road section, grassy and bumpy, came soon after, as did the first ford, which we crossed with shrieks and laughter. After stopping at the Waterfront Inn in Diss for food and drink, we continued to Swattesfield Campsite in northern Suffolk where some lovely bell tents and a fire pit were waiting for us.

Day two began with strong sunlight and strong coffee. We were heading back into Norfolk on a mix of tarmac, off-road trails, and even some stretches of sand – short enough to walk over for those on thinner tyres. Gravel fire-roads took us through Thetford Forest to Lynford Arboretum, where we bought cold summer spritzers from a trailside café called Shepherd’s Baa. Lynford Water was such a rich blue it looked like we were abroad. There was some great singletrack beside it too.

Our next stop was the mostly-ruined church of St John the Evangelist, Oxborough. Its spire collapsed in 1948, damaging the nave. Fortunately the Bedingfield monuments survived. These are renaissance terracotta tombs, said to some of the finest 16th century memorials in England. After inspecting them (I studied art history), we continued to Swaffham and beds at the St George Hotel. 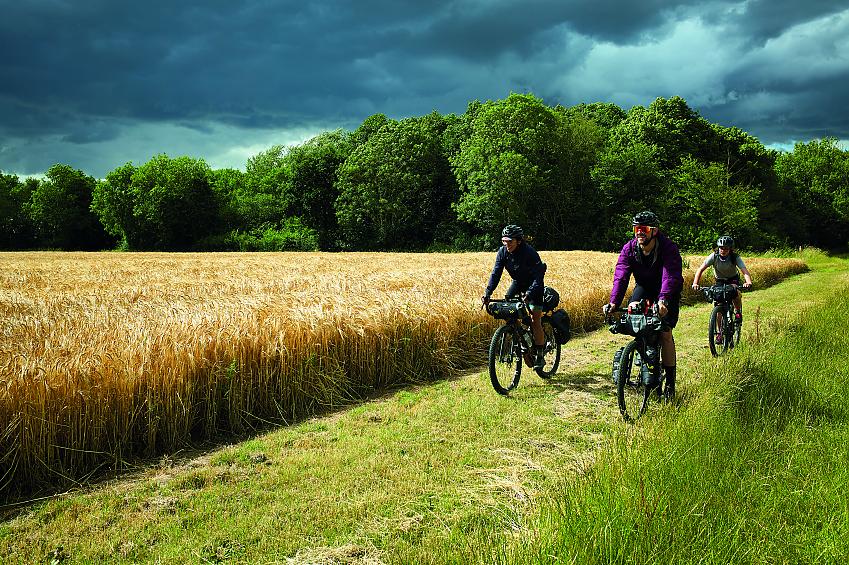 Castle Acre Castle was a breathtaking sight on the morning of day three. It’s one of the most impressive Norman earthworks in the country. Plaques describe how the castle’s purpose changed over its lifetime and explain the different layers of construction. We then joined Peddars Way, an old Roman road (and modern day National Trail) that runs arrow straight from Thetford to the north Norfolk coast. We didn’t stay on it exclusively but continued to encounter it for the rest of the day, crisscrossing and riding parallel to it. Wonderful and wide forest tracks with overhanging canopies framed our way for a while. Then we came to a halt, literally in some cases, at a section of loose, red sand.

Eventually we reached King’s Lynn, where Cobbles Tea Room provided a wide selection of artisan cakes. From there we cruised alongside the River Great Ouse, past patios and bustle. Castle Rising, Sandringham and Holkham presented us with tremendous castles and fairytale-scale estates.

Before long we were approaching the coast, riding along a delightful boardwalk on NCN Route 1. At Wells-next-the-Sea we camped properly for the first and only time of the trip, using our own gear.

Rain overnight faded away and we woke to sunshine, which quickly dried damp kit. Then we set off for the Walsingham, known as ‘the Nazareth of England’ thanks to the shrine that was built there after medieval noblewoman Lady Richeldis said she had visions of the Virgin Mary.

The day’s riding was again a good mix of paved and unpaved fun. We continued through the seaside town of Sheringham, where the drizzle returned, and on leaving it encountered the route’s only real climb: mostly rideable gravel, there’s a short hike-a-bike section to reach the 87-metre high viewpoint. The view over the coast is worth the climb.

After Sheringham we rode first on forest tracks with log piles alongside, then on gravel tracks past the National Trust property of Blickling Estate. We picked up some goodies in Aylsham to take to our final night’s stop – glamping again, this time in a bell tent strewn with fairy lights, beds and blankets. We played charades and listened to music by a wood stove before turning in. 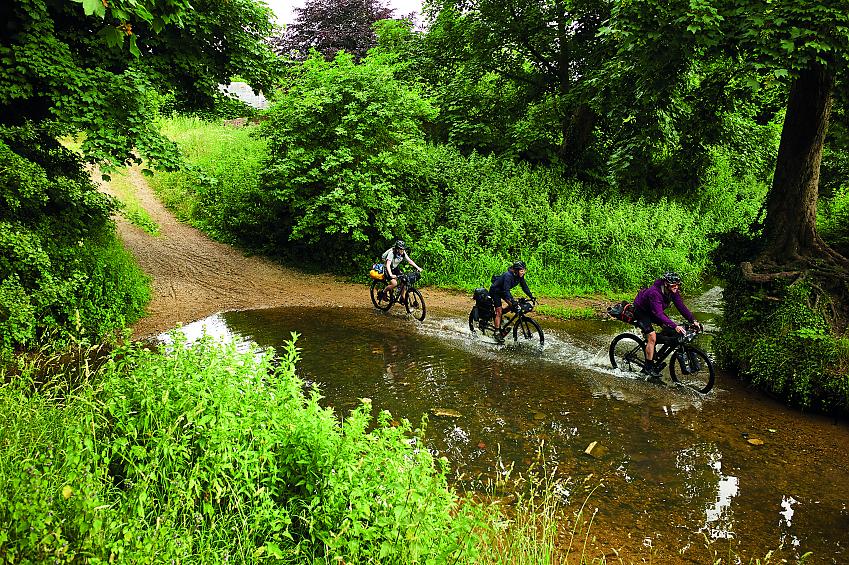 We rode back into Aylsham on our final day and spotted an old steam train on the Bure Valley Railway, Norfolk’s longest narrow-gauge railway. The workers there let us in to see it up close. Much of the rest of the day was spent beside the train tracks on a parallel trail surfaced with what I call ‘kitty litter gravel’. This trail took us all the way to Hoveton, where virtually all of the shops are called ‘Roys’ after a pair of local businessmen brothers.

After riding along Hoveton’s pretty riverside for a while, we turned back towards Norwich. More lovely lanes and a bit of bridleway got us most of the way there, then a busier road took us back into the heart of Norfolk’s county town. We agreed that, before catching our various trains home, we had one last stop to make: Kett’s Heights, where Robert Kett and his 10,000 followers gathered before they besieged the city in 1549 to protest at the ‘redistribution’ of common land.

Over five days we’d had an enjoyable journey through centuries of Norfolk’s history. On top that, it had been a pleasant and easygoing bike ride. I come from an ultra-cycling background, so this route was a breath of fresh air. I could confidently bring my sister on this ride – or a friend who is just getting into cycling. Yet there’s enough to entertain my mates who are experienced bikepackers. Flat does not mean boring. 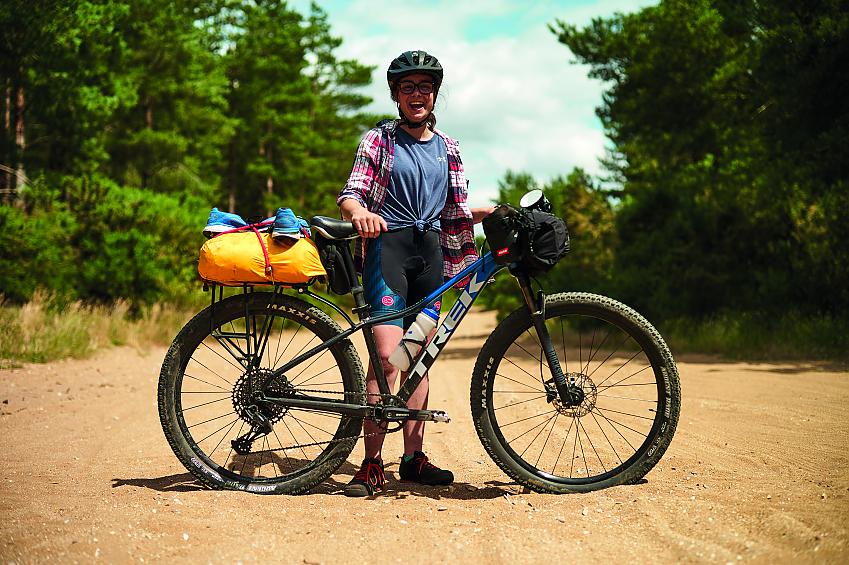 “I was riding my Trek Marlin MTB, which I found super comfortable – particularly on some of the off-road stuff. I think a gravel bike would also have worked well. On the back I had an Alpkit Sonder Mool pannier rack with a dry-sack strapped on with a bungee. This contained my sleep system. On the front I had an Alpkit handlebar bag containing all the other stuff, mainly snacks. I also wore a small Apidura rucksack which contained my phone etc. I really liked my setup and found it to be light(ish) and compact.” 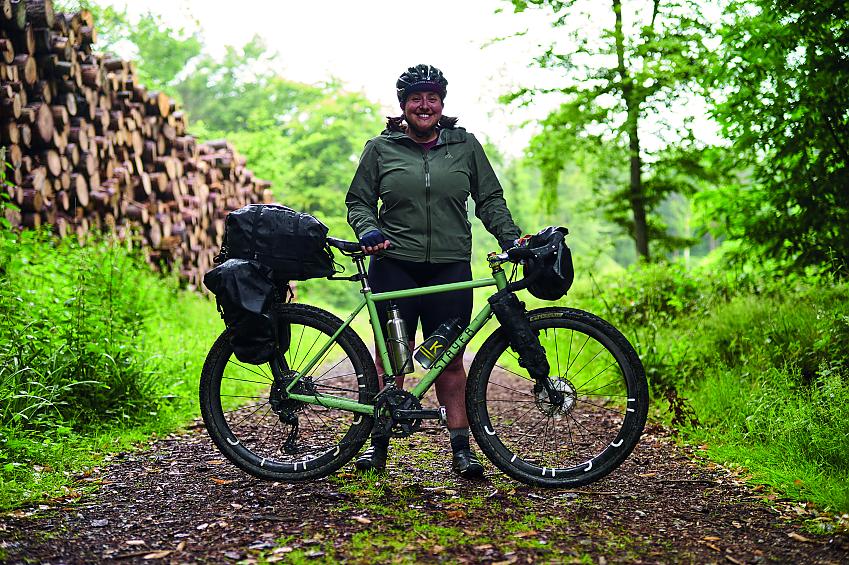 Mildred has done plenty of bikepacking, including riding Cycling UK’s Cantii Way earlier this year. She likes to carry quite a lot of stuff. To make sure it stays dry, all her bags are waterproof. “I was riding my Stayer Groadinger UG bike with a Tailfin Aeropack, mini panniers and fork bags, and an Ortlieb handlebar bag,” she said. “This setup was fine – more than adequate. The route is well suited to a gravel bike with a streamlined bag setup.” 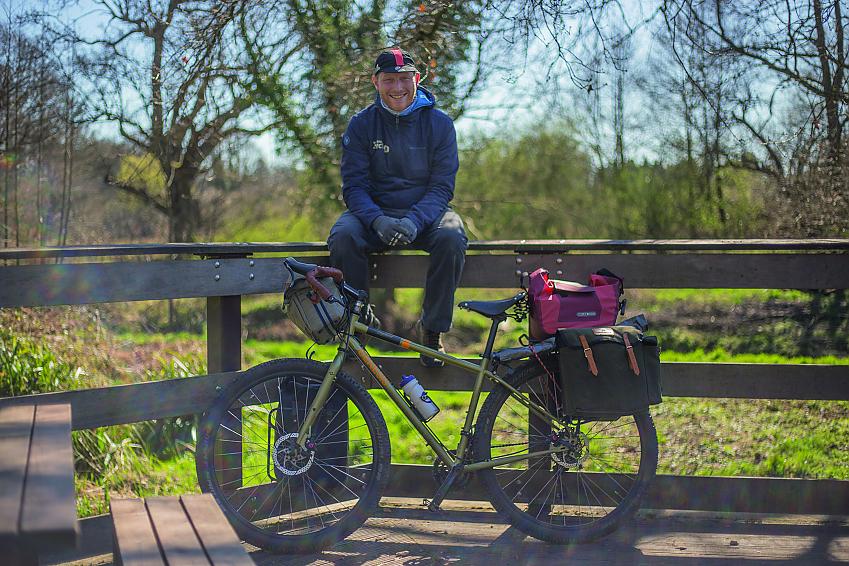 “I rode my Genesis Vagabond, using traditional panniers, trunk bag and handlebar bag. Although this made for quite a heavily-laden bike, all my gear was easy to access on the fly and pack/ unpack without fuss. I also had space to accommodate some of my fellow riders’ items when a 9kg watermelon required a redistribution of our stuff. A couple of bungee cords were needed to provided extra security on the rough-stuff. I think this is a cheap albeit heavy system, with great accessibility and flexibility.”

As one of 14 partners on the EXPERIENCE project, Cycling UK is working to deliver sustainable new off-season tourism experiences, including long-distance routes like the Rebellion Way. We’re also supporting businesses to attract cyclists with the Cycle Friendly Places accreditation.

The €23.3 million project is co-financed by the European Regional Development Fund (ERDF, €16 million) through the Interreg VA France (Channel) England Programme 2014-2020, and aims to boost visitor numbers in six pilot regions including Cornwall, Norfolk and Kent.

Route: A clockwise loop from Norwich, first heading south into Suffolk before turning north and passing through Thetford Forest. Up to the coast at Wells-next-the-Sea, then to Sheringham, Aylsham, and back to Norwich.

Conditions: Mostly warm and sunny weather with (in June) very dry and dusty trails. Aside from some short sections with loose sand and gravel, the off-road sections were all easy to ride.

Bike to use: Any bike capable of moderate off-road terrain. A touring bike or hybrid could tackle this, not just a gravel bike or mountain bike.

Getting there: You could begin and end anywhere on the route but Norwich railway station is ideal.

Accommodation: We stayed at a mix of campsites, hotels, and glamping sites. I’m glad I had: Sunscreen and a rain jacket for the changeable UK weather. Coffee and a stove so that I could brew up.

Next time I would: Bring a tent instead of a bivvy bag for comfort.