"Hey, Jo… You know that big climb we were worried about yesterday?” I called out behind me as I slowly pedalled up another steep hill.

“I think we were worried about the wrong hill.” Breathing raggedly, I came to a stop at the roadside, contemplating the rising tarmac ahead. Time for another mini-egg break!

We had been expecting a lot of rain as it was April, and Wales, so we were staying in B&Bs rather than camping

Jo and I were cycling the Lôn Las Cymru over the long Easter weekend, across Wales from Cardiff to Holyhead. We had been expecting a lot of rain as it was April, and Wales, so were staying in B&Bs rather than camping.

Theoretically this meant we were lighter up the Welsh hills, but my bike still felt pretty sluggish. That may or may not have had something to do with the quantity of mini-eggs and hot cross buns that I had stashed in various bags.

From Cardiff seafront, the start of the route followed the Taff Trail, a mixed cycling and walking path along the Taff river valley. It was a beautiful morning and the trail was busy with dog walkers and runners. It was lovely to be away from vehicles but there were a lot of barriers that we had to stop for.

We continued to climb up the valley and into the Brecon Beacons, grinning in anticipation. The switchbacks near Pontsticill were our first proper taster of how steep the roads can be in Wales. I secretly wondered if my legs would be up to the challenge, before stopping halfway up the pass at a car park area.

“Just taking in the view!” I called to Jo as she came past. The second half wasn’t so bad, and the views from the shoulder of Craig y Fan Ddu were glorious in the sun.

Having caught our breath, we almost missed the turn for our descent – a balcony gravel track above Talybont reservoir. I’m a nervous descender at the best of times, but our bikes (coincidentally matching Genesis Croix de Fers) were really stable on the mixed terrain we encountered.

Halfway down the gravel, Jo got a puncture so we pulled over. I helped out by taking photos of the pretty view while Jo got to work fixing the flat. The disadvantage of bikepacking bags, in vogue though they may be, is that whatever item you want will invariably be buried at the bottom and so you have to unpack nearly all of the bag’s contents to find it. Guess where the inner tubes and tyre boot were? 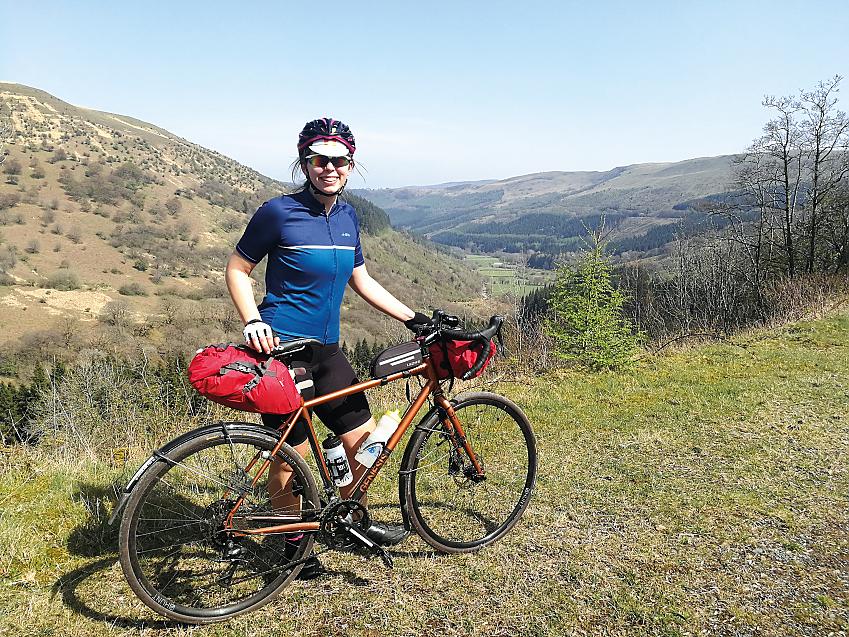 Kat on the descent to Talybont on Usk

We nearly rode straight past Talybont on Usk but circled back and found the café, along with my dad who had ridden out to meet us. The café was attached to a bike shop, which provided a new tyre and spare tube for Jo.

The last 25km was lumpier than we had thought but gave beautiful views back to Pen y Fan and across to the Black Mountains. We were on narrow lanes until Talgarth, and pulled into Glasbury B&B at about 6pm. Nicky and Alistair were the perfect hosts, greeting us with: “Tea? Hot cross buns?”

This was our longest day. As our average speed was leisurely, we set off early, enjoying nearly empty roads all morning. We stopped to take photos of prancing little lambs and bluebell woods in full bloom. It was nice riding next to each other; it had mostly been single file on the Taff Trail.

From Builth Wells, we had a meandering road to ourselves as all the vehicles were on the nearby A-road. We later joined this and rode it to Rhayader, rather than following the cycle route at Llanwrthwl as the guidance advised it was a pretty rough track. The A470 had been resurfaced and was super smooth. We glided along it in our big chainrings.

Lunch stop number one was in Rhayader. A gang of elderly folks were sat at the table next to us and seemed to know everyone in the village that walked past.

Refreshed, we continued north on a single track road of mixed surface on the other side of the River Wye from the A-road. It felt like we had the valley to ourselves.

We paused at a bridge over the Wye and got chatting to two cycle tourers for a while. They were the third group of people to recommend the Great Oak Café in Llanidloes. It was a little off the route, but who were we to say no to highly recommended cake?

The climb out of Llangurig was lung busting. We undulated over some more beautiful hills before crossing a baby River Severn, where we diverted down into Llanidloes.

The Great Oak Café was being used as a control point for an Audax, and a few folk from our cycling club, the Cowley Road Condors, were riding it today. Just as we were tucking into our second lunch, they turned up!

It was great to see them. They were still looking pretty strong, although their tales of the climb that we were about to do did little to lessen our apprehension. 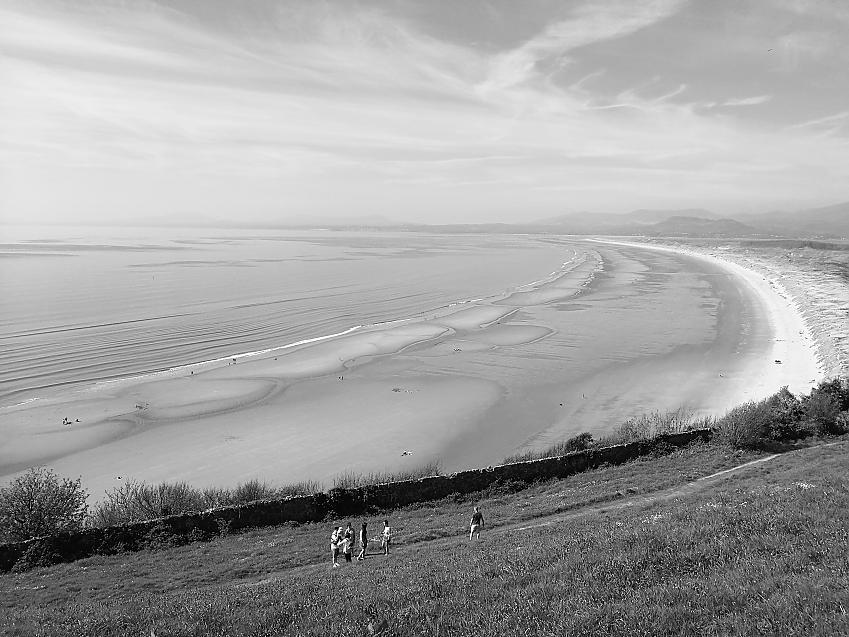 It was now hot in the spring sunshine. My mini-eggs melted together. After the road turned away from the River Severn, I stopped for a break in the shade to cool down while regrouping with Jo.

We’d reached the first peak of the climb, then the road opened up onto a flatter plain. The Audax route must have been different from ours; there had been nothing outrageously steep. We did, however, have a more industrial view of the reservoir than they would have. The climbing soon began again. But what a view from the top!

The road surface on the descent was immaculate. The hills were hazy in the afternoon sun and we drank it all in, enjoying the swooping freewheeling.

We pulled into Machynlleth and tucked our bikes away in the hotel barn before collapsing onto our beds.

We’d been so worried about the big climb yesterday we didn’t register how hard today’s was until we were halfway up it. We would later read that the climb out of Aberllefenni was one of the toughest on the National Cycle Network. We stopped several times. One particularly steep ramp near the top made me cry out in effort. 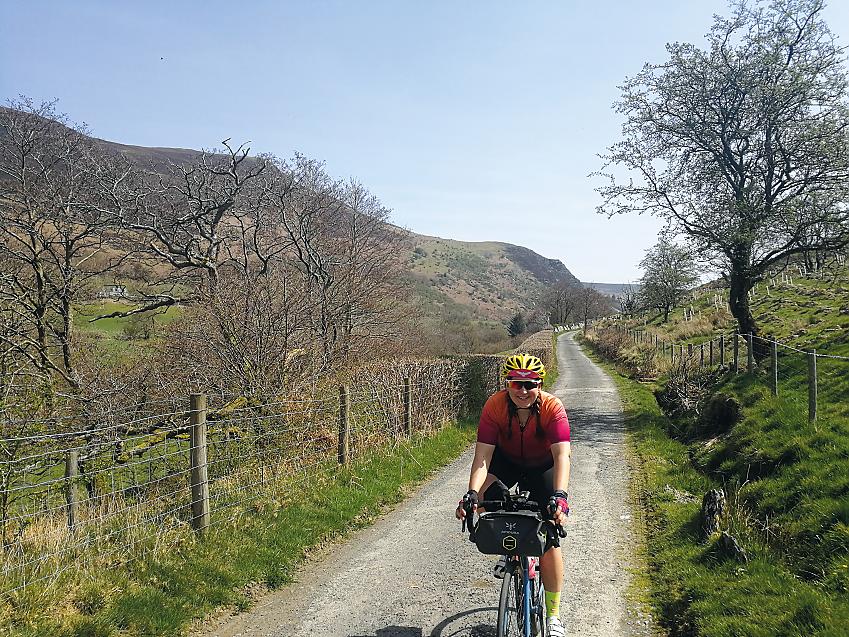 Jo rolling through the Wye Valley

We got our breath back by the gate near the top, and chatted to two men cycling the Lôn Las Cymru going south and a woman cycling to Dolgellau. We stopped for a snack break halfway down the descent on the other side, taking in the views on another glorious day in Wales.

Leaving Dolgellau somewhat later than planned, we followed the Afon Mawddach on a pleasant flat gravel track. The waters widened until we crossed over on the wooden Barmouth Bridge and hit full beach traffic in Barmouth. Ice-cream time!

After a nice stretch along the promenade, it was a steep climb to rejoin the road. A driver who had mostly blocked the path with his van (but held the gate open for us) commented on how steep it was. I thanked him but internally shrugged it off – he should see what we’d already climbed! Fifteen seconds later, I was pushing the bike up the slope. Back in your box, ego.

We got chatting to a cycle tourer taking photos over Harlech beach and dunes. He had already ridden our route to Holyhead and was now riding back to Cardiff. He gave a useful tip for Harlech – to take the road through the village instead of around it, and we were rewarded with a nearly empty road on the long descent afterwards.

We checked into our lovely B&B in Criccieth, which had great views over the water and the mountains of Snowdonia.

A lot of today was on separate mixed-use cycle paths with surprisingly good surfaces. We could ride next to each other again, delighting at how& pretty everything was. A fourth day of blue skies and sunshine, with little wind: it was not what we’d expected when planning an Easter trip to Wales. 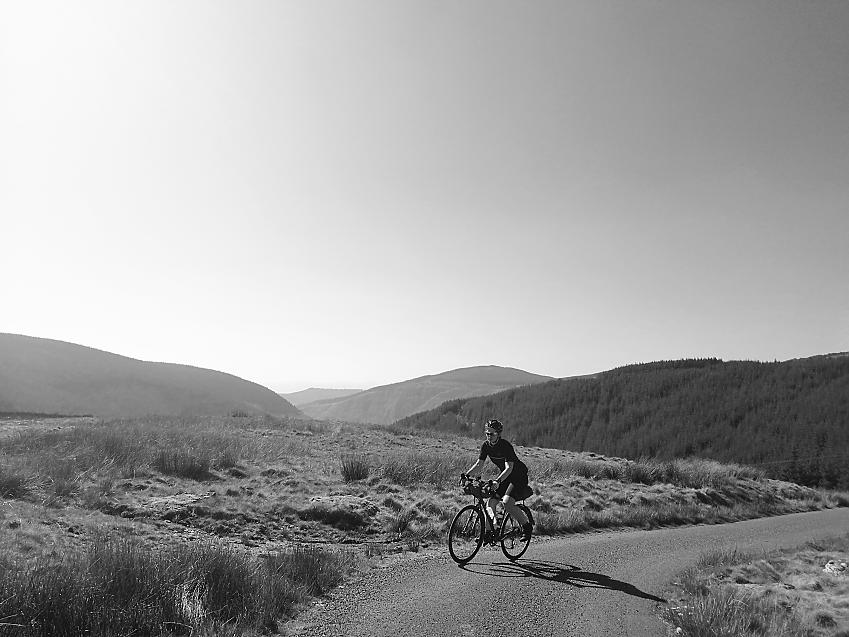 Kat summits the steepest climb of the route

I was glad it wasn’t windy over the Menai Bridge onto Anglesey, and the climb afterwards gave impressive views back to the mainland. One of my mudguard bolts had come loose but the screw was still there. A quick tighten and all was well.

We were on a fairly busy road until Pentre Berw, where we turned off onto a cycle track through flat marshy fields. This turned into small country lanes, and it felt like we were in Devon or Cornwall. In the past, I’ve been up mountains in Snowdonia in the rain and seen a little patch of sun over Anglesey. It was nice now to be riding in just such a patch of sunlight.

Rolling through Holyhead’s suburbs, we reached the harbour front and took some celebratory photos, before stocking up with provisions for the train ride home. Diolch, Cymru!

Do it yourself: Lôn Las Cymru

Jo and I took trains from Oxford to the start at Cardiff, then back from Holyhead. We used a ticket-splitting app to save on cost.

Bikes must be booked on all of the main routes, and it’s worth asking station staff where the bike storage will be if it’s not marked, so you can be standing in the right place on the platform. Holyhead is the starting point for a mainline service so the train will be standing there for at least 20 minutes before departure, which makes loading the bikes less stressful.

We booked accommodation in advance to make sure they accepted bikes and had somewhere secure to store them. There are plenty of campsites around the route if you’d rather camp.

Route: Cardiff to Holyhead on the Lôn Las Cymru (NCN Route 8), through the Brecon Beacons, the Cambrian Mountains, and around the edge of Snowdonia.

I’m glad I had: Jo! I enjoy touring by myself but it was great to share the highs and lows with a friend.

Next time I would: Consider cycling to the start rather than getting the train. Probably fit slightly larger tyres to help with the rougher sections.

Brecon Beacons to Snowdon: A big Welsh adventure with the BBC View