On 12 September, the BBC Wales will broadcast a mountain bike ride from the Brecon Beacons to Snowdon. Cycling UK member and tour leader Paul Rogers was the route guide.

"It’s way too deep. We need to head upstream to the footbridge," I said. Television presenter Richard Parks was having none of it. He hoisted his bike on top of his large shoulders, turned his helmet camera on, and stepped into the swollen river at Nant-y-Moch. With the film crew wrapped for the day, we were on our own, in dreadful conditions, 30 miles from our overnight stop. With time against us, I followed Richard, making sure that my every step was firmly planted before proceeding.

That wet evening in June, on the high moors of mid-Wales, we had what could best be described as a ‘boy’s own’ adventure, riding through absurdly deep puddles on moorland tracks, crossing swollen rivers, and storming down through forests at breakneck speed, grinning from ear to ear.

The route to TV

How Cycling UK came to be involved in a television programme perhaps explains why the new branding is so important to our club and to adventure cycling in general. One Tribe TV were commissioned to make a three-part series by BBC Wales to promote 2016’s Welsh Year of Adventure. They needed expert help to design an off-road route across the high mountains of Wales that would be challenging and interesting, but still manageable for a film crew with heavy equipment. They did some research and came across Cycling UK; our new name evidently defines us well.

As a tour leader for Cycling UK’s holiday company – CTC Cycling Holidays – I had run a demanding off-road tour along some of this route in 2014. So I was drafted in to see if I could help to make it happen. Lots of brainstorming then followed with other off-road leaders in Wales. The route was tweaked and then tweaked again. Five weeks later, I joined the film crew to act as route finder for Richard Parks, the host of the show, a former Welsh rugby player and now full-time adventurer.

As one of the ambassadors of the Welsh Year of Adventure, Richard was an obvious choice to host this: he’s conquered the highest peaks on all seven continents, has trekked to both poles, and has completed a host of gruelling cycle adventure races. I was slightly daunted by my task. Although I am a relatively fit and capable mountain bike rider, this seemed out of my league. Richard, however, was a real gentleman, with time for all those around him and always ready to crack a joke when the going got tough. 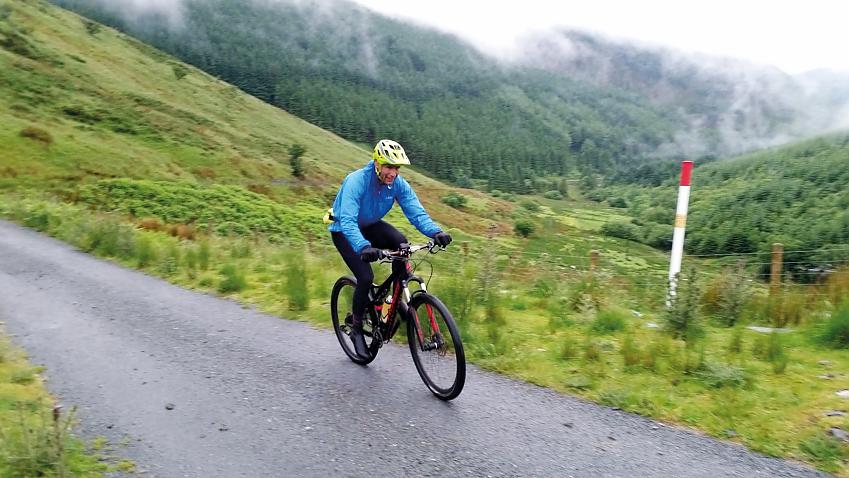 Late in the day on the mountain above Corris, Richard Parks takes to the tarmac.

Rain in the hills

The plan was to ride – off-road, as much as possible – from the top of the Brecon Beacons to the summit of Snowdon in four days. On paper, this seems a relatively easy task. With hours of filming to fit in and a number of celebrities joining us along the way, the days were set to be very long indeed. The ride was in the middle of June to provide plenty of daylight and, hopefully, decent weather.

The weeks leading up to the ride were fabulous; day one was anything but. By the time the film crew reached me at Newbridge on Wye, we were already four hours behind schedule due to a serious road closure further south and heavy rain. Several hours later we had to abandon filming at the stunning Elan Valley reservoirs as darkness fell, with what seemed to be the entire UK midge population out to get us.

I know the Elan Valley well. It’s a stunning landscape of man-made reservoirs, built a century ago to supply water to Birmingham, 75 miles to the east. Photographs on my phone showing the area in better weather convinced the producer to keep the drone crew on and make an early start filming the following morning.

I know the Elan Valley well. It’s a stunning landscape of man-made reservoirs, built a century ago to supply water to Birmingham, 75 miles to the east. Photographs on my phone showing the area in better weather convinced the producer to keep the drone crew on and make an early start filming the following morning. Aerial drone controllers Peter and Stef, both keen bikers themselves, shot some stunning footage, drawing the drone skywards as Richard crossed the Craig Goch dam, slowly revealing the wonder of the Elan Valley, a view that I will never grow tired of. Richard’s small mistake of ducking as the drone swooped over his head on one take might have meant a second run, but his laughter had the team in high spirits in what turned out to be another long and very wet day.

As the rain set in, I was pleased to be driving the camera van over to Devil’s Bridge and onwards to the Nant-yr-Arian trail centre. The van’s back was door open to film Richard on the road sections, but it was warm and dry inside! The red kites at Nant-yr-Arian are fed at 3pm whatever the weather. The fact that it was now raining heavily, with thick mist on the ground, wasn’t about to change their plan. Trying to film Richard assisting with the feeding session meant further delays to the schedule.

We finally left the crew at around 6pm and headed out across the bleak moorland of Nant-y-Moch… Some hours, later we finally dropped down the Sustrans route into Dolgellau, the light now all but gone and an eerie silence in town on this mid-week evening as Richard completed his daily video blog. 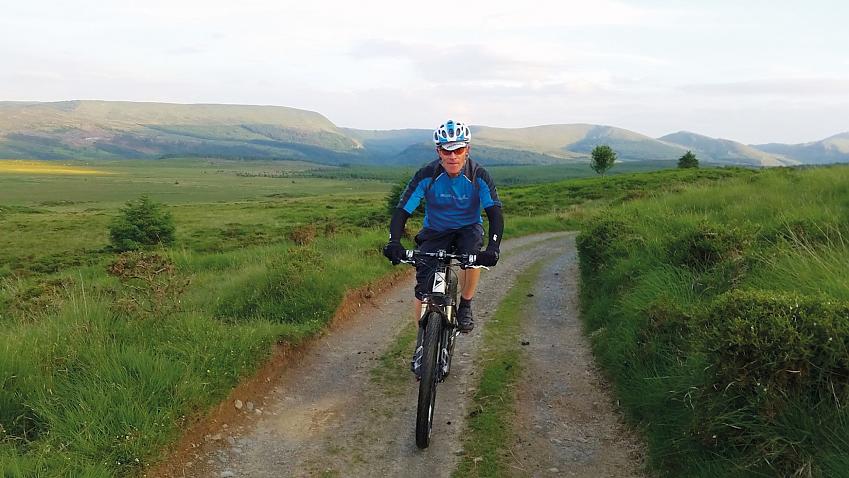 Day three was based around the trail centre at Coed y Brenin and the Antur Stiniog downhill centre at Blaenau Ffestiniog. Richard would be riding both. We took the beautiful back road up to Coed y Brenin and bumped into another mountain biker on her way to work. After several minutes, the penny dropped: Annie and I knew each other from when we both lived in Derbyshire 20 years ago. What a small world!

Up until 1997, the phrase ‘trail centre’ didn’t exist. The reason for our visit that day was to talk to Sian Roberts, one of the founders of that first dedicated mountain bike trail. She was an inspiration then and is still pushing the boundaries today. Sian took Richard for a blast around the original Red Bull trail whilst I caught up with friends old and new, hung out in the excellent café, and generally hid from the regular lashings of rain.

Our next stop was Antur Stiniog. We received a good soaking cycling there, but it was completely dry when we arrived, no doubt making our waterproofs look odd. There are now several dedicated downhill centres in the UK. As the name suggests, you only have to ride downhill; an uplift service takes you and your bike back to the top. This type of trail is often much more severe in its design, with bigger drop-offs and other technical obstacles that require a bike with longer-travel suspension.

We were joined there by Tracy Moseley, who despite being the current Mountain Bike Enduro World Champion and a previous Downhill World Champion, treated the afternoon as a ride out with a few mates. Her ease in front of the camera put Richard in the right zone for this relatively new discipline to him. Drones hovered around as Tracy and Richard made several runs of the red route. After filming finished back at the top, Tracy gave us a brief ‘that’s all, folks’, and headed straight off the edge to ride the technically demanding double-black run back to her van far below us. What an exit! 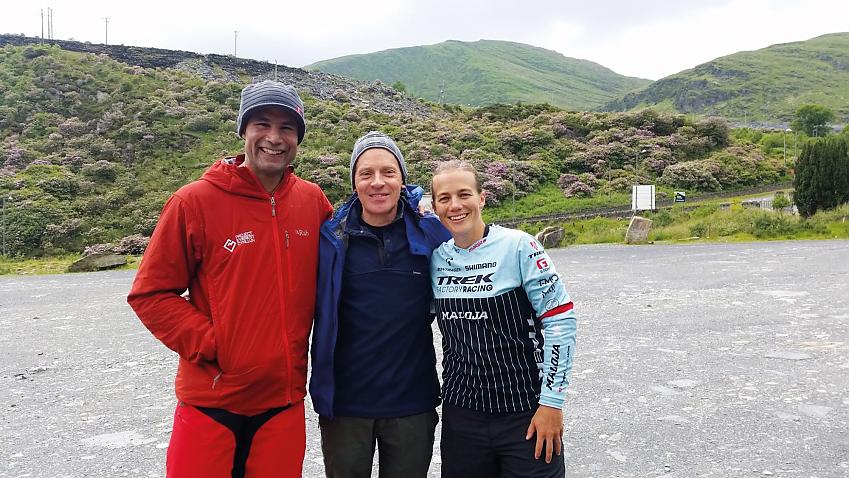 We delayed our departure for another hour to complete an important piece to camera. Snowdon summit, the destination for tomorrow, could be seen on the horizon, bathed in the glorious evening light. The crew would travel to Capel Curig, arriving in time for the 9pm dinner deadline. Richard and I, with a mountain range to cross, placed an order for pizzas. We anticipated another long evening.

However, food does focus the mind. After a near-50mph descent of the Crimea Pass, Richard and I made short work of the off-road track over the shoulder of Moel Siabod, even stopping to photograph the stunning sunset. Then we had a white-knuckle descent down a boulder-strewn track. With broad smiles, we entered the hotel at 9.05pm. The crew could not believe their eyes as two elated mountain bikers sat at the table next to them. We ordered hot food, a couple of beers, and followed that with cold pizza. Life was good.

The final day saw me at the helm of the minibus again, with the cameraman harnessed in the back to film out of the open rear door. I was pleased to be at the wheel that day, given the frequent heavy rain showers. Richard remained in good spirits, even during the multiple retakes we had to do due to passing traffic. A fascinating interview with Dr Lynda Yorke from Bangor University about the geology of Wales wrapped things up at Idwal Cottage.

Then the crew headed down the old valley road towards Bethesda and onwards to Llanberis for the 5pm start on the Snowdon ascent. With no route-finding required on Snowdon, and a very late finish planned (as the crew would have to walk off the mountain with all the gear), I took my leave and cycled to Bangor for the train home.

It was a memorable few days, with some big highs and lows. I’d done it as a volunteer. Why? As with the cycle tours that I’ve led as a volunteer over the past 12 years, it put me in touch with a fabulous group of people. (Some of those who have been on my tours have become great friends.) It was also down to my love of the Welsh countryside, and the hope that this TV series might inspire a few more people to get out and enjoy it. I’m still involved with a project to (hopefully) create a long-distance legacy route to celebrate the series, so let’s see where that goes. I might even run the Welsh end-to-end once again to celebrate the TV programme, this time from south to north. Any takers?

Richard’s exact route and GPX file is downloadable and available from the page. It was compromised a little for filming. A legacy route will hopefully be published on the BBC's Get Inspired website.

My original CTC Cycling Holidays tour was a north-south coast-to-coast trip from Conwy to Swansea, loosely following the Sarn Helen Roman road. If you’re interested riding this south-to-north with me, email: paul.rogers@cyclingholidays.org.

For general information about mountain biking in Wales, visit mbwales.com.

Mapping: I used a combination of ridewithgps.com and Memory Map to design the route and a simple Garmin 200 to follow it.

Bikes: Richard, who is sponsored by Specialized, rode most of the route on a carbon, full-suspension S-Works XC bike. I rode my full-suspension Ghost XC bike with 26-inch wheels.

I’m glad I had… A new Gore-Tex waterproof jacket and Endura waterproof shorts. A midge net for my head and antihistamine tablets for the numerous bites I got elsewhere.

Next time I would… Take good lights (film schedules never go to plan, apparently!) as well as DEET for the midges.

Programme details: The mountain biking programme is one of three in the series ‘Extreme Wales with Richard Parks’. It airs on 12 September on BBC One Wales and is due to be broadcast on BBC Two. If you missed it, catch it on iPlayer.