Grip was impossible. Half an hour’s worth of rain had turned the Ridgeway’s chalk trail into slippery paste. While Katherine Moore (from Unpaved Podcast) was providing a masterclass on wet chalk, the rest of us were slipping then plodding along this part of King Alfred’s Way.

Alfred was king of Wessex, the largest of the eight Anglo-Saxon kingdoms at the end of the ninth century. He wouldn’t have made a good touring cyclist: he famously nodded off on cake-watching duty, letting said cakes burn. But he was some war leader. He drove the  Vikings out of the South West and beyond the Midlands, earning his epithet.

Alfred is closely associated with the landscape of Cycling UK’s latest long-distance off-road route so we named it after him: King Alfred’s Way (KAW). Connecting four National Trails (the Ridgeway, North and South Downs Ways, and Thames Path), King Alfred’s Way is  the latest piece of the jigsaw in our development of off-road routes.

Campaigns officer Sophie Gordon explains: “Thanks to Cycling UK’s work around Scotland’s 2003 Land Reform Act, cyclists can enjoy similar access to the countryside as walkers and other outdoor enthusiasts. In Wales and England it’s a very different story.” 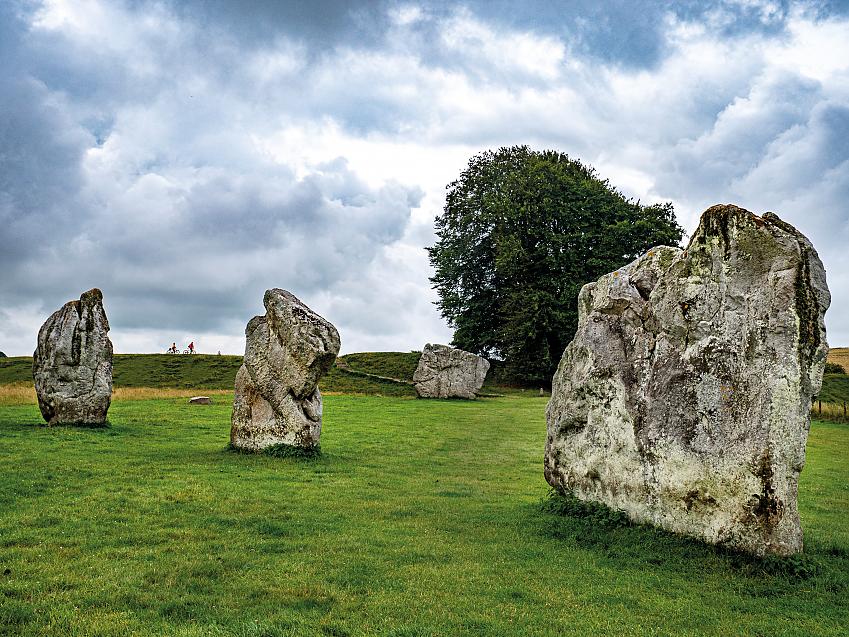 In these two countries, almost 80% of the rights of way network is barred to you. After five years of campaigning by Cycling UK and OpenMTB, the winds of change are blowing in Wales. The Welsh Government is exploring how they can change their rights of way, giving cyclists and horse riders more opportunities to enjoy the countryside.

“England needs to play catch up,” says Sophie. “We have 15 national trails, yet only two of them can be cycled end to end: the Pennine Bridleway and South Downs Way. That’s why Cycling UK aims to capture the public’s imagination and support by honouring the original purpose behind our national trails and filling in the missing links.”

King Alfred’s Way was due to be launched in June. With the country in lockdown since March, the necessary work – reconnaissance, photo shoots, and a safety audit – was not possible. Like the rest of the UK, we had to wait. In England, this meant until restrictions lifted in July and overnight stays at campsites were allowed.

That moment came on 6 July. The next day, I left my home in the Surrey countryside and raced down lanes and trails to the Izaak Walton in East Meon, Hampshire, for a rendezvous with the first group to ride the KAW. 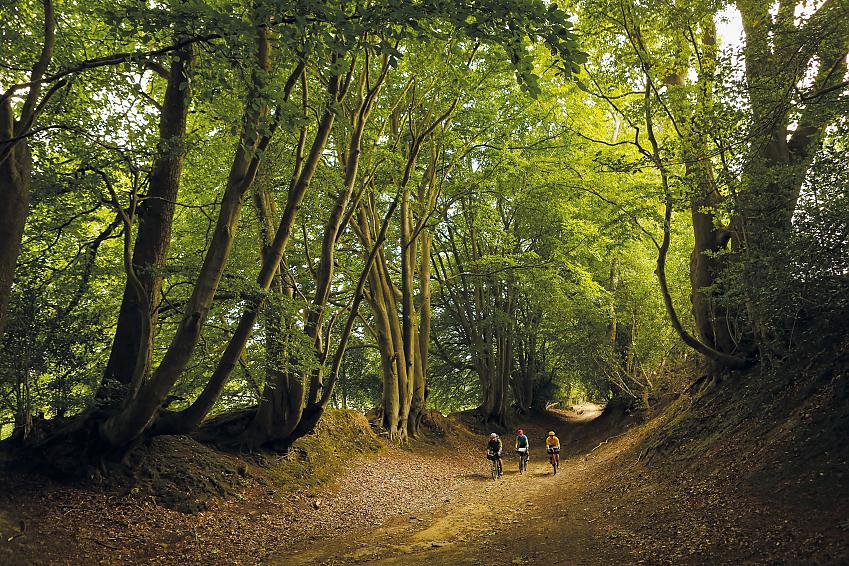 My riding companions – Stef Amato and Dave Sear from Pannier, Katherine, and Sophie – had started earlier that morning at Farnham. Since then they’d battled through the Surrey sands around Frensham and Hankley Common, discovered a downed bridge en route, waded the Wey, and braved Butser Hill.

It was a strange meeting, a sign of the strange times we currently live in. Before that day I’d never met Katherine, Dave or Stef – nor had I seen anyone apart from my partner and neighbours for four months. It felt odd. “Do we bump elbows?” someone asked. Touring in a pandemic is different. It was great, however, to escape the cramped confines of lockdown at last.

Buzzing with energy, we flew along the lanes to our intended campsite for the evening at Meon Springs Fly Fishery. The assembled anglers looked on bemused from motorhomes as five cyclists rolled up and began pitching tents, hanging hammocks, and prepping  dinner. Dave broke the ice by unfastening his portable rod from his top tube and asking where the best spots were. They soon opened-up, offering us freshly-smoked trout with our supper, while we traded questions over our chosen hobbies.

These fleeting encounters are part of what makes a tour worthwhile. As well as the fishermen, we met off-road motorbikers in Tilshead who were returning to the Peak District from Cornwall. They were as curious about our bikes as we were about theirs.

The other important part is the landscape you travel through. Stef probably said it best: “Sewing together a real patchwork of different landscapes from chalk downs to rolling crop fields and leafy forest, King Alfred’s Way showcases some of the finest off-road riding in the South.”

For me it was the perfect combination of engaging trail and road, which takes you past a long list of popular holiday destinations. And the best thing? No traffic jams to reach them! For two days, from East Meon to Wantage, we were spoiled. Every slope we fought our way up would reward us with fine views, Iron Age hill-forts, and descents that would leave you gripping and grinning for dear life.

Passing through such a rich landscape of archaeological and natural wonders, it’s hard to pick highlights. Some might say Avebury and Stonehenge, the Vale of Pewsey, or the Ridgeway. For me it was Salisbury Plain, an ancient landscape that has flourished under military custodianship. 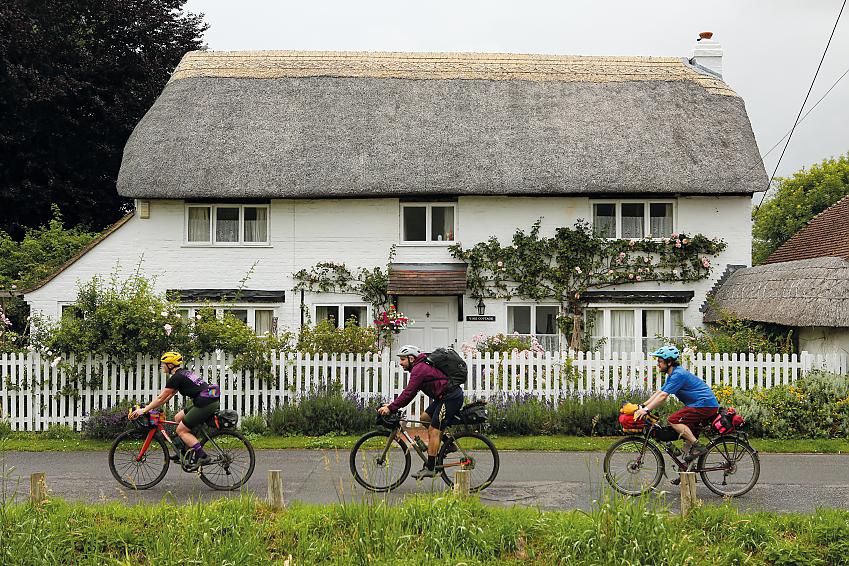 Skylarks sang as we rolled along the Imber Range perimeter path. Only tank tracks and warning signs showed that this land was different. Even the weather was generally kind, until the end of our penultimate day when the heavens opened.

I started the final day with a heavy heart. Lockdown legs unused to such riding needed a rest, but this little adventure, this break from a world of bleak news bulletins, was coming to an end… on what the map indicated would be a dull day.

I shouldn’t have been concerned about riding nor scenery. From a field black with rooks like a Van Gogh painting in Mapledurham to the surprisingly punchy climbs along the Thames Path or the frankly unbelievable trail out of Reading skirting the A33, this final day of constant surprises culminated in a whoop-inducing 100-metre descent to our finish in Farnham town centre.

Route: It passes through Winchester, Salisbury, Reading and Farnham.

Conditions: English summer, so rain and shine along bridleways, byways, and minor roads. Expect chalk, sand, mud, and gravel. Nearest stations: Winchester, Reading, and Farnham stations are all on the route.

I’m glad I had...Wide gear range on my tourer, hand sanitiser, and some fine companions.

Next time I would...Aim for a lighter setup and take more time out to enjoy the historic sites.

The Countryside Act in 1947 paved the way for National Parks, Areas of Outstanding National Beauty, and long-distance national trails. The Hobhouse Report envisaged these as “continuous routes which will enable walkers and riders to travel the length and breadth of the Parks, moving as little as possible on the motor roads.”

For 70 years this vision has largely ignored cycling. Cycling UK’s current mission is to right this wrong, which meant until recently only the  Pennine Bridleway and South Downs Way could be ridden end-to-end. In 2018, we launched a continuous riders’ route for the North Downs Way, followed by the 800-mile Great North Trail  in 2019. Now, in 2020, King Alfred’s Way links four national trails.

We want to recapture the dream from 70 years ago that the Cyclists’ Touring Club would no doubt expect from Cycling UK in its modernised incarnation. The national trails should be for everyone – and we’ll campaign until they are.