Cycling across the Sprengisandur, Iceland’s vast plateau, means gravel roads and river crossings. Richard Ingham leapt at the chance in 2019

Do you fancy crossing Iceland by bike? The question from my cycling friend Mike came out of the blue. He didn’t know that I’d had an obsession with Iceland since my schooldays. Two months later we were in the village of Hella, east of Reykjavík.

Our plan was to ride from the south coast to the north using the infamous F roads through the Highlands, a 335km, five-day journey. We knew that the trip was at the mercy of the Icelandic weather. I’d read about travellers being stopped in their tracks by driving wind and rain. So it was with some relief that we set off in shorts and T-shirts.

On the second day, heading north on the F26 under blue skies and with a warm tailwind, we finally left civilisation behind. Passing traffic was less than one vehicle per hour. The vistas were vast. The huge lake of Þórisvatn was on our right. Two specks of colour in the distance turned out to be two walkers with heavy packs. They were also from the UK, and conversation flowed freely.

It was with weary legs that we rolled up to the Versalir hut in the late afternoon. The door was locked; this was a private cabin, not one of the Icelandic Touring Association huts. But to our surprise there were stables (for pony trekking tours). The door was open and, despite a strong smell of straw bedding, Mike opted to sleep in them. I stuck with our tent.

We were just settling into our respective abodes when two figures loomed out of the dusk. They had been walking all day, navigating by GPS, off trail, and were jolly glad to see us and to have use of the stables. Small mercies! 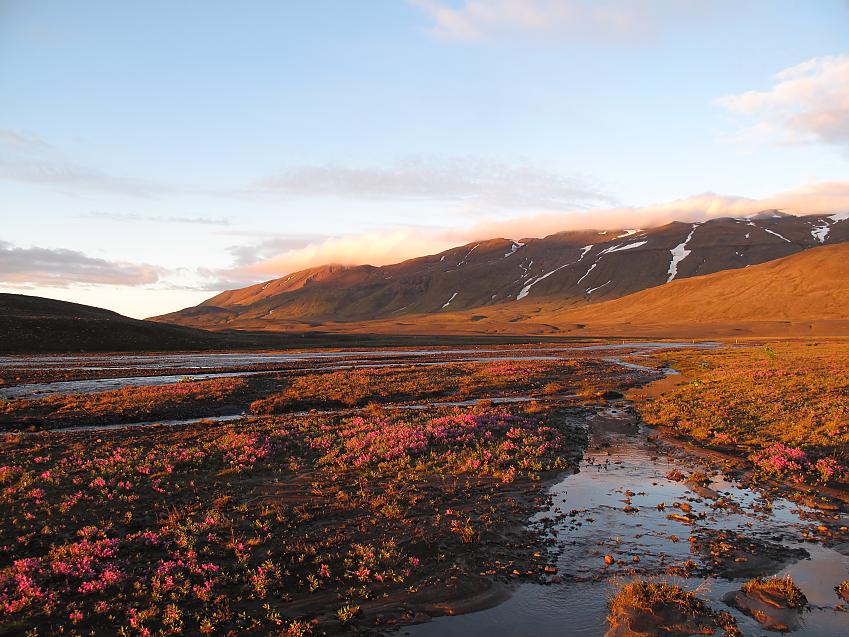 By the third day we were feeling sufficiently confident in this empty landscape that we opted for a longer, even more remote route as we headed for Nýidalur, a hut in the centre of the interior. We left the relative safety of the F26 and rode north on an unmaintained track. The massive icefield of Hofsjökull started to reveal itself to the west – as did its icy blasts of katabatic winds, mixing strangely with our warm tailwind.

It was mid-morning before we saw any vehicles: a convoy of Land Rovers equipped with snorkels. “Any deep fords?” I asked the lead driver. “No problems for you today,” he said. “The rivers are low.”

I relaxed and started to take in the detail of the landscape. At first, it seemed devoid of vegetation. But if you looked carefully there were splashes of colour – vivid green moss, yellow algae, and bright flowers squeezing through the stony ground.

We waded across a crystal clear river in canoe shoes, then had our second and last human contact of the day: a Vatnajökull National Park Ranger in a large 4×4. She was on a mission to remove wild lupins – the flowers we’d noticed. They weren’t native to Iceland, she said. Seeds were accidentally brought on American contractors’ vehicles when building a dam.

The track became quite sketchy as we pressed on into the evening, our eyes scanning the vastness for evidence of Nýidalur hut, our night’s resting place. It marked the entry to Sprengisandur, a wild and bleak place even by the standards of Iceland’s Highlands. But what a sunset we were treated to! 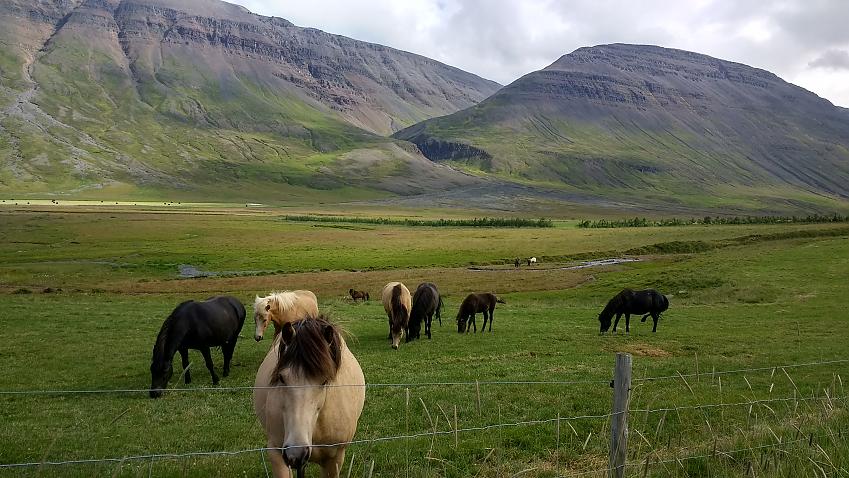 The following day we penetrated further into Sprengisandur. I’d read that some travellers find the landscape monotonous but that was never the case for me. Cycling provided just the right amount of progress, and the stony surface required attention, keeping any risk of boredom at bay. Sometimes Mike and I rode side by side, chatting without any concern for traffic. At other times we might be a mile apart, lost in our own thoughts.

We were on the F752 heading for Laugafell (879m) and its hut, which is next to a natural thermal pool. I dropped my bike and jumped straight in. It was like the hottest bath you can bear but surrounded by a dramatic landscape and pure mountain air.

The following day was our final and longest day on the bikes. Our objective was Akureyri, Iceland’s second largest ‘city’ (population 18,000), some 85km distant. Navigation was straightforward: junctions and turns come up at the rate of only two or three per day in the Icelandic Highlands. But you need to be absolutely sure you take the right route.

Down from the plateau

As we came off the plateau, we could see the huge, glaciated trench of Eyjafjardalur stretching out in front of us. We descended on the roughest surface we had encountered, our rigid gravel bikes and panniers taking a pounding. Vivid greens of moss appeared where streams cascaded down the valley sides. Then we came across a farmer on a quad bike bringing hay to his sheep, then farmsteads with ponies. It could have been the Lake District!

But we still had a long way to go and we hadn’t reached tarmac yet. We took it in turns to take the lead into a strong headwind. Gravel became tarmac. Then the sign for Akureyri appeared. We had returned to civilisation. It was, Mike and I agreed, our biggest adventure to date. 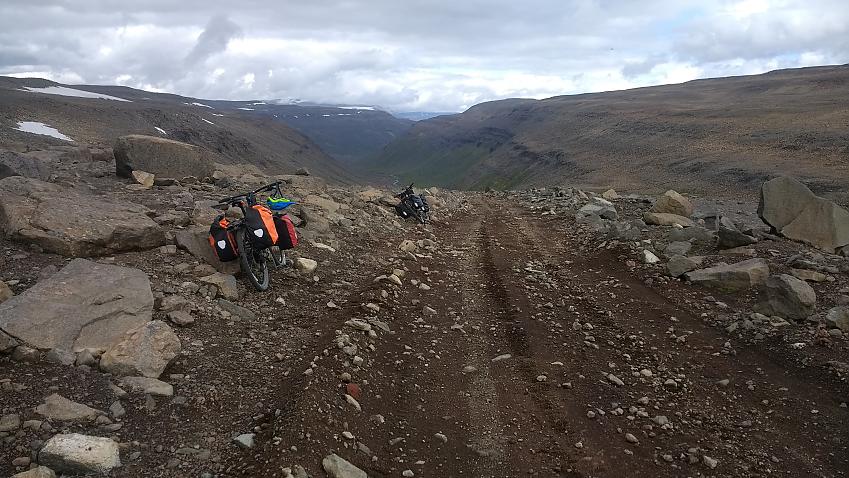 Do it yourself: Iceland by bike

The first crossing of the Sprengisandur by bike was completed in 1933 by amateur astronomer and CTC member Horace Dall. He rode alone, although a local farmer rowed him across a river.

The first unassisted crossing was by legendary Rough-Stuff Fellowship cyclist Dick Phillips and two companions in 1958. Dick became the UK’s Iceland adventure expert well before the country was on the tourist trail. Sadly, he died in 2019.

Weather: Warm and sunny. We were lucky! Best time to go: July- September. The F roads aren’t cleared of snow until late June.

I’m glad I had…Researched route options, booked all our accommodation, and had Mike as a companion!