Chris cycles with confidence thanks to the Inverclyde Bothy

Chris cycles with confidence thanks to the Inverclyde Bothy

42-year-old Chris McCann hadn’t cycled much since fracturing his skull in a crash as a teenager. Thanks to the Inverclyde Bothy he’s now cycling with confidence, which he says has had a big impact on his life.

“I feel a lot better, a lot fitter. The wind in your hair, the breeze in your face, it’s really enjoyable.” It’s fair to say that Chris is loving being back on a bike, after many years away.

The opportunity to get a refurbished bicycle, and confidence-building cycling classes, came at an opportune time. Chris, who lives in Greenock, explains he hadn’t been getting out and about as much as he would have liked.

“There’s been times not too long ago where I was shutting myself away more and not being out as much as I probably should, which doesn’t help with your mental health. Being able to get out on a bike has been a big lift, it’s helped a lot.”

Chris heard about the Cycling UK-led Inverclyde Bothy through his volunteer work at Belleville Community Gardens in Greenock, one of the many community organisations the Bothy works closely with. After meeting Bothy development officer Josh Wood, plans were quickly put in place to help Chris start cycling again. 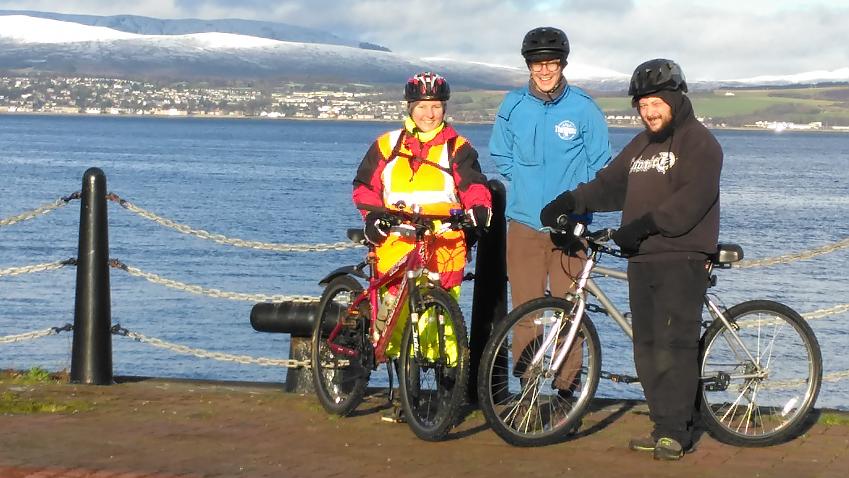 He was enthusiastic from the start: “I knew it would be good for me, to get me exercise I wasn’t getting otherwise. It gets me out of the house more than sitting in.”

Chris was able to get a refurbished bike thanks to local organisation Community Tracks, another of the Bothy’s partners. Although he could now get out on two wheels, he wasn’t confident to ride on the road.

“I was cycling on pavements and not sure of roads,” Chris explains. “A big part of it was not feeling confident on the road, because I always felt I had to stay in right next to the curb. When I was younger I was encouraged to cycle on pavements, especially after having an accident as a teenager and fracturing my skull.”

As Chris explains; “Thanks to Better Biking, I’m more confident to go out and stay in primary position and keep my space on the road. It’s definitely given me a lot more confidence.”

The Bothy has also helped him to discover off-road cycle paths close to home, which offer peaceful riding with views of Inverclyde’s beautiful scenery.  “I hadn’t realised where parts of the cycle route were. Going along by the waterfront, it’s amazing.”

Chris now uses his bike several times a week; “I was more likely to get a bus – now I can jump on my bike. It saves money, it’s better for the environment and it’s better for me. I feel a lot better, a lot fitter.”

He now wants to use his newfound confidence on the bike to help others. He’s planning to take a Cycle Ride Leader course with the Bothy, so that he can lead rides with another local group he is involved with, Inverclyde Recovery Café.

“That would be great – another boost for me and my self-confidence,” Chris says. “My main motivation is to give other people the opportunity that I’ve had. To get that bit of freedom and go out cycling. For me it’s opened so many options.”

Inverclyde Bothy to get hundreds of people cycling and walking View