What does HS2 mean for you?

The communities in this picture will be cut in two by HS2. Photo by DJIM (Creative Commons)
By Roger Geffen
Friday, 3 August 2018

What does HS2 mean for you?

Cycling UK Policy Director Roger Geffen recently had the unedifying experience of being flame-grilled, chewed alive and then unceremoniously spat out by the Commons Committee which is scrutinising a Bill to enable the construction of part of the High Speed 2 rail link. However all is not lost as Roger explains...

I have previously outlined our petition, the background to it and the key points we are calling for. In summary though, Cycling UK is not opposed to HS2 per se, but is keen to ensure that cycling and cycle safety:

(N.B. Our Phase 1 petition also covered issues like cycle parking and storage at stations, however there are no stations on the Phase 2a section).

12 years ago, Cycling UK had tabled a similar petition against the Crossrail Bill (now the Crossrail Act).  As a result of this, Transport for London (TfL) is now doing some really admirable work to address the lethal threat that lorries pose to cyclists, and indeed to pedestrians.

For one thing, they have adopted the ‘Construction Logistics and Community Safety’ (CLOCS) standard for construction lorries, lorry drivers and operators. For another, campaigns by Cycling UK and the London Cycling Campaign have led TfL to consult on a ‘direct vision’ standard and a related safety permit scheme. This, we hope, will ultimately lead to lorry cabs being designed so that the driver can see what’s around them as easily as a bus driver can. TfL’s proposed ‘roadmap’ towards making this standard the norm will initially aim to get the worst-performing lorries off the roads by 2020, then progressively drive up safety standards over the following years. 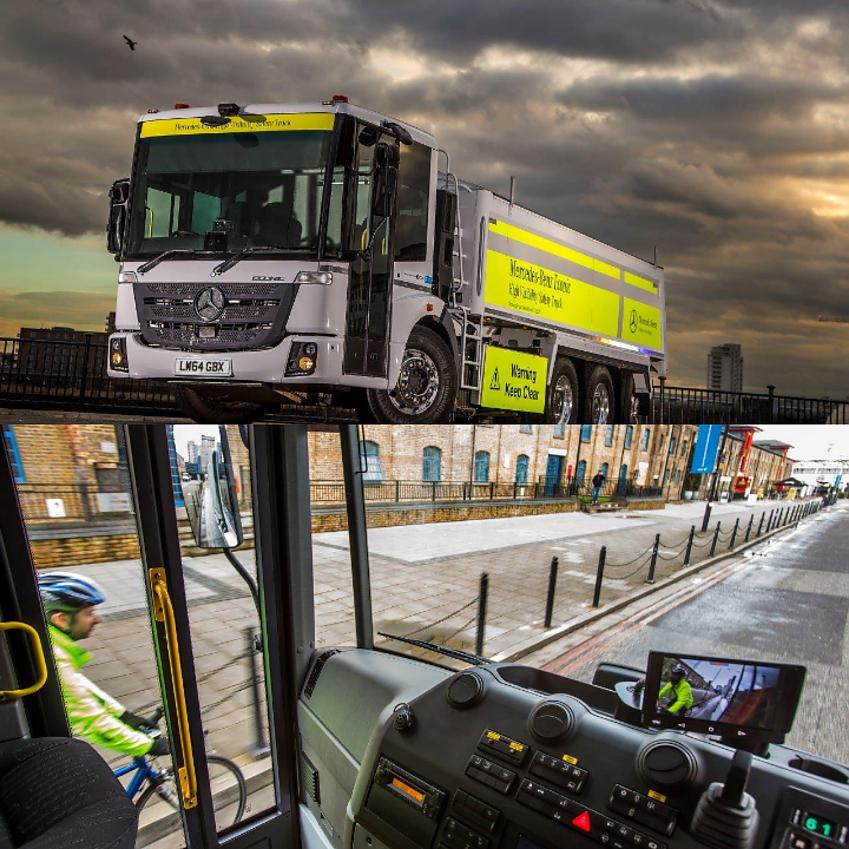 My argument to the HS2 Bill Committee was fairly simple. HS2 Ltd should at least match and preferably exceed TfL’s ‘CLOCS’ and ‘direct vision’ standards. It is a hugely important Government-backed construction project, which no sensible construction company will want to be excluded from by having unsafe lorries. Hence HS2 could be a real force for good in terms of promoting safe lorries, safe lorry operators and drivers, and safe lorry routing.

‘Cycle-proofing’ is ‘cycle-policy-speak for the idea that cycle-friendliness should be designed in at the outset when planning any road or traffic scheme, new development or even planned highway maintenance works (when you’re resurfacing a road, that’s a very cost-effective opportunity to think: can it be made more cycle-friendly at the same time?) It’s a somewhat clumsy term though. It is meant to be the equivalent of 'future-proofing', i.e. designing cycling in. It is definitely not intended to be like 'water-proofing', i.e. keeping cyclists out!

During the passing of the HS2 Phase 1 Act, Cycling UK was given a legally-binding parliamentary assurance that HS2 Ltd would engage in a regular dialogue with Cycling UK and others represented on the Government’s ‘Cycle Proofing Working Group’. Moreover, the assumption was that cycle-proofing would be done to reflect the excellent new cycle-friendly design standards that had recently been adopted by Transport for London (the London Cycling Design Standards) or the Welsh Government (under its Active Travel Act 2013).

In practice though, HS2 has adopted a Technical Standard for Roads which briefly mentions the London and Welsh standards, but then provides some really dreadful design advice which is totally at odds with those standards. Moreover they never told us about this document till a year after first adopting it – despite having revised it twice in the meantime. This, we feel, is a straight breach at least of the spirit of the parliamentary assurance we were given, and probably the letter of it too. (N.B. the link above is to the original version – the current version isn’t publicly available).

So I had lined up two really authoritative witnesses to help make our case that we now needed some rather more forceful assurances. They were:

Phil Jones, chair of transport consultancy Phil Jones Associates. He was the lead author of the Welsh design standards, and the subsequent cycle-friendly design standards adopted by Highways England for all works affecting their network of motorways and trunk roads (including junctions and crossing points, as well as movement along or near them). He has now been commissioned by DfT to play a key role in drafting the long-overdue rewrite of the DfT’s own cycling design guidance, which covers the rest of England. His involvement means there is a real chance that the end result will be as good as the Highways England and Welsh standards.

John Grimshaw, the founder and original Chief Executive of Sustrans, now director of the charity Greenways. John and Phil were jointly commissioned to work on plans for an ‘HS2 Cycleway’, which was to roughly follow the HS2 route, but also provide connections to local communities which might otherwise be severed by the route. DfT has since abandoned the HS2 Cycleway idea, but the local links and crossings that John identified still really important.

Unfortunately the Committee were in no mood to listen to us on the afternoon when we were called to give evidence. We were due to start at 2pm, but they were expecting a crunch Brexit vote at 3.30pm, which had the potential to bring down the Government – and they had us and another petition to get out of the way before that vote.

Yet even that cannot excuse the question put to me by Committee member Sheryll Murray MP. “Surely,” she asked, “if you restricted HS2 to contracting a specific set of contractors who have invested in new lorries, they might find that they couldn’t provide best value for the public purse because you would actually limit the companies that they could contract from […] “given that they have to stick to a realistic budget as well”?

I felt like saying: “What price a human life?” – but I didn't feel she'd be persuaded by that one!  So I pointed out that deaths are not only tragedies for the individual, but they have costs to the construction company and to the wider economy too. 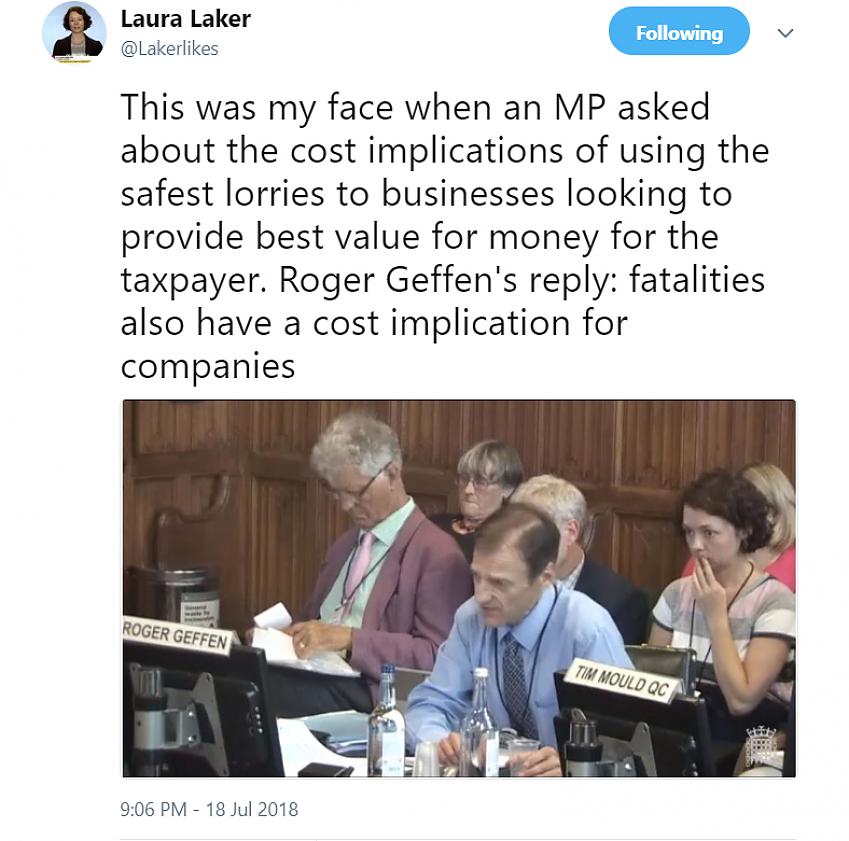 Phil Jones commented afterwards that he had given evidence at around 50 public inquiries during his working life, and had never found it so difficult to get his point across as it was to this Committee.

The Guardian Bike Blog has already provided some very helpful coverage of our petition. However, we now need to take our case to the wider media and for that, we need our own members and supporters who live or cycle in areas that will be affected by HS2, whether by Phase 1 or by Phase 2a – to tell us about the routes which you fear could be lost, or made more dangerous and inconvenient, if HS2 doesn’t provide cycle-friendly bridges and crossings and other cycle-friendly access. Tell us how they would affect local residents, including children getting to school etc, as well as any impacts on recreational cycling in valued parts of the countryside. To help get you started and show where the route of HS2 goes, John Grimshaw has provided county-by-county route-maps and scheme diagrams for locations where he believes those crossings are needed.

Let's get the best for cycling out of HS2 View
Cycling UK continues to support the UK to cycle
This remains true during this difficult period with the ongoing threat of coronavirus Covid-19
Read our latest advice on cycling
Join Cycling UK to help us change lives and communities through cycling
Membership gives you peace of mind insurance, discounts in cycle shops, rides & routes
Join now