Update the Highway Code to make cycling safer: why wouldn’t you?

Our second recommendation looks to tackle the infamous practice of car dooring
By Keir Gallagher
Thursday, 10 May 2018

Update the Highway Code to make cycling safer: why wouldn’t you?

For the fourth in a series of blogs outlining some key proposals included in Cycling UK’s response to the Government’s review of cycling and pedestrian safety, campaigns officer Keir Gallagher discusses how three simple changes to the Highway Code could help tackle some of the most persistent acts of bad driving in the UK, creating safer roads and encouraging more cycling

Let me hazard a guess at your most common near misses while cycling on our roads: close passes by overtaking drivers? A left-turning vehicle cutting across your path? A car door opening abruptly in front of you?

For me and, I expect, many others, these three practices always hit the top of the list. They represent the kind of ‘everyday’ bad driving which endangers cyclists on almost every commute or weekend ride.

They are also among the most significant deterrents to inexperienced cyclists. If even the most confident riders feel shaken when a car hurtles past, going far too fast and driving far too close, it’s no wonder that novice cyclists are often quickly put off cycling after experiencing a dangerous close pass by a driver.

Overcoming this kind of day-to-day bad driving is vital in improving both cycling safety and the perception of cycling as a generally safe activity – which is key to boosting cycling uptake among non-cyclists, and developing a more diverse cycling community.

However, complaining about drivers won’t get us where we need to be. The reality is that most close passes, dangerous left turns and car-dooring incidents are not malicious attacks on cyclists, but bad driving habits which are ingrained in motorists’ subconscious, and which are reinforced through a lack of proper education, information and regulation relating to safe driving around cyclists. 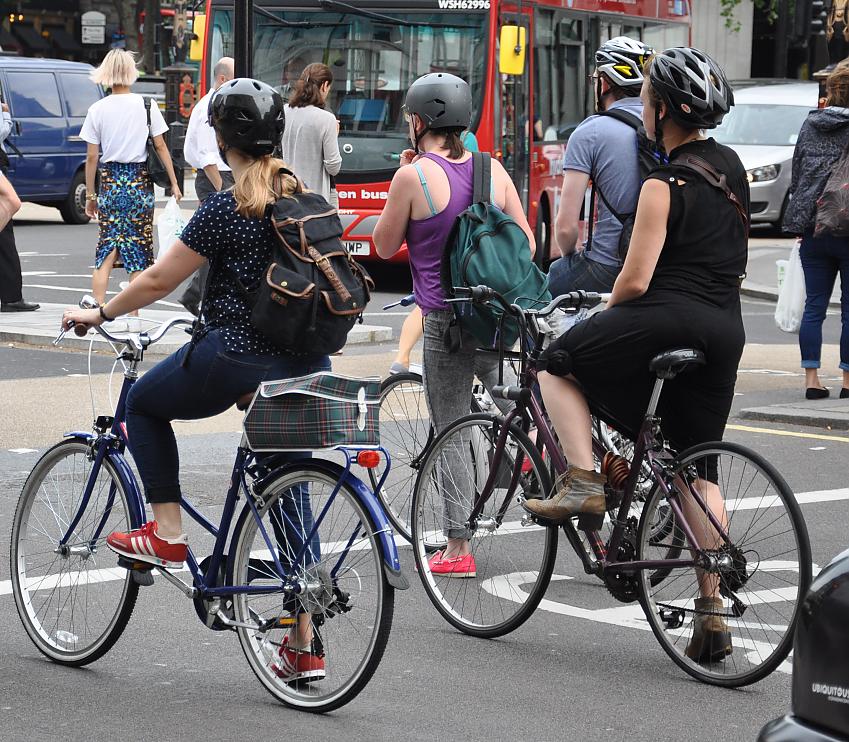 But although kicking bad habits is never easy, some simple changes to the Highway Code, which underpins our daily use of the roads, coupled with targeted, promotional communication, could provide that first step on the path towards roads free from these entirely unnecessary risks.

Improved regulation of this kind of driving in the Highway Code would also enable courts to better decide whether a driver is liable for causing a road incident – as adherence to the code can be considered by courts posed with this question.

Let’s start with junctions, where more than two thirds of collisions involving cyclists occur (and 55% of all collisions), making them the most dangerous aspect of our roads network.

Various infrastructure systems can help reduce these risks (see our blog on infrastructure design standards for more information), but alongside this we should look to Europe for inspiration, where rules on junction priority protect cyclists (and pedestrians) against left-turning vehicles.

In both The Netherlands and Denmark, where cycling is significantly safer and sees higher uptake than in the UK, drivers, when turning left, must give way to cyclists travelling straight ahead – protecting vulnerable road users around the most dangerous part of our roads.

Simple, right? Not for us in the UK! Over here, while similar rules apply when the driver is turning left across a cycle lane (Highway Code Rule 183), they do not have to give way if no cycle lane is present, despite the fact that Rule 182 does specifically encourage left-turning drivers to “look out” for cyclists, and therefore clearly recognises the risk.

This leaves cyclists and drivers in a situation where the right of way depends on the presence of a cycle lane (not always obvious from the driver’s line of sight) and puts more vulnerable cyclists – those unprotected by a cycle lane – at greater risk.

Our proposed change is not anything radical or even altogether new, but an extension of the already existing Rule 183 – to require that all left-turning traffic give way to cyclists (and pedestrians) moving straight ahead at a junction.

This consolidation would create a more cohesive code, as opposed to one in which drivers must give way in some circumstances and not others, which causes confusion to all road users, especially when we all know of certain cycle lanes which miraculously appear and then disappear along single stretches of road. Some drivers, of course, don’t take much notice of cycle lanes anyway.

Requiring drivers to give way whenever they are turning left is something which has also been campaigned on by British Cycling with its Turning the Corner campaign, and will encourage drivers to automatically check for cyclists as a matter of habit before every left-hand turn, while also helping courts attribute the blame for dangerous or careless driving where an accident has occurred in these circumstances.

Our second recommendation looks to tackle the infamous practice of car dooring , in which a driver or passenger opens their vehicle door right into the path of an oncoming cyclist. This is far more than a mere nuisance, and has sadly led to many serious injuries and in some cases death for unfortunate cyclists.

In looking for a solution we can, once again, learn from our Dutch friends, and follow their lead by adding the Dutch Reach to the Highway Code.

But what on earth is the Dutch Reach? The premise is incredibly simple: by opening your car door with the hand furthest from the door – reaching across with your left hand if you are in the driver’s seat – you are forced turn your body and look to the blind spot where a cyclist may be just about to pass, and you’ll also be restricted from throwing the door wide open.

This incredibly simple concept has the potential to revolutionise our approach to this serious issue. It is the kind of measure which, if introduced alongside a widespread educational campaign and potentially one day included in driving tests, could quickly become the natural method of getting out of a car for drivers and passengers alike – which is what these changes are all about: overcoming dangerous bad habits.

That brings us neatly on to what I’m sure many of us consider the very worst of all ‘everyday’ threats to cyclists.

Advice on leaving a safe space when overtaking cyclists

Close passes by drivers are the bane of the lives of many – probably all – cyclists. We all know that pang of terror when a lorry or car flies by you at top speed, and for the want-to-cycle-but-too-scared friends of mine, this is without a doubt the biggest barrier to cycling, often leaving the rider with their heart pounding and a genuine feeling of threat to life or limb.

The Highway Code once again fails to regulate this problem in a way which properly protects cyclists. While the code does regulate overtaking, the current rules do not recognise the vulnerability of cyclists and are unnecessarily vague. Rule 163 requires that drivers “give motorcyclists, cyclists and horse riders at least as much room as you would when overtaking a car”.

A driver’s understanding of what qualifies as “too close”, sitting safely within their metal box with seat belts, roll cages and air bags, will likely be very different from that of a cyclist

So far, so vague. And how much room should be given when overtaking a car? Just enough to “not get too close”. I expect you see the problem.

Apart from the fact that cyclists (and motorcyclists and horse riders) are far more vulnerable than motorists and, as such, “not too close” to a car may well be too close to these road users, this is incredibly subjective. A driver’s understanding of what qualifies as “too close”, sitting safely within their metal box with seat belts, roll cages and air bags, will likely be very different from that of a cyclist.

It is worth noting that studies show it is drivers who must take responsibility for this hazard, as close passes have little to do with how visible a cyclist is. Research by the University of Bath found that regardless of the clothing worn by cyclists – normal clothing, hi-vis, or even mock police clothing with a letter changed to read ‘POLITE’ – drivers still failed to pass at a safe distance, with 1-2% of drivers passing within 50cm of the rider.

Some police schemes to tackle these close passes have been highly effective. West Midlands Police pioneered ‘Operation Close Pass’ in 2017, in which plain clothes officers on bicycles report close passes to a police team further ahead, who stop the driver and offer an on-the-spot lesson about safely passing of cyclists via the use of a ground mat, as an alternative to prosecution or a fine.

Following this, Cycling UK’s Too Close for Comfort campaign helped crowdfund close pass mats for police forces across the country.

This is a perfect example of how a coordinated balance of education and enforcement can significantly improve road safety. The scheme triggered a 20% reduction of vulnerable road user casualties in the space of a year.

The implementation of similar schemes alongside all our proposed Highway Code changes would ensure they have a real and rapid impact on road safety. After all, this is about changing motorists’ habits, not just punishing them.

Nonetheless, these operations must go hand in hand with Highway Code rules which protect cyclists and are clear on drivers’ responsibilities – which the current rules on overtaking are not.

As part of Cycling UK’s response to the Department for Transport’s Cycling and Walking Safety review, we will propose a move from the vague notion of not getting “too close”, to a more clearly defined rule which gives objective guidance to drivers – and to courts.

For example, the code could cite a guideline of 1.5m as a safe overtaking distance at speeds up to 30mph, and 2.0m for higher speeds. It could also urging drivers to leave wider gaps in bad weather, and advise those in charge of larger vehicles to take extra care.

Such rules would allow for the inherent levels of subjectivity needed on an issue like this, depending on the road, conditions, speed and vehicle, but also set a clear bottom limit for what is simply “too close”.

This would leave the courts better able to attribute responsibility in the case of an accident. More importantly, if the changes were brought in alongside an effective publicity campaign, it could change drivers’ mindsets, so that they give cyclists the space they need to use our roads safely.

The key message from this is that some of the most common yet seriously dangerous driving manoeuvres, which deter budding cyclists and risk the lives of those who do ride, can be easily overcome through some simple changes to the Highway Code, which will not cause any noticeable inconvenience to drivers.

Accompanied by educational material, these changes will, over the longer term, work their way into drivers’ subconscious until safe driving around cyclists becomes a natural part of everyday road use.

To make these changes a reality, we need your support. Go to our Cycle safety: make it simple campaign to take action, by sending an email to the Cycle Safety Review team at the DfT adding your voice to our recommendations, and contacting your MP about road safety laws and their enforcement.

Invest more in cycling, walking and safer streets: why wouldn’t you? View

Invest more in cycling, walking and safer streets: why wouldn’t you? View

Making it safe to cycle: why wouldn’t you? View

Making it safe to cycle: why wouldn’t you? View