The Boxing Day walk is a thing of tradition in the UK, but why not spruce it up a bit and make it a little more interesting with a cycle treasure hunt instead?

Turkey, nut loaf, roast potatoes, Christmas pud: whatever your Christmas Day menu is, if it’s anything like our proposed menu for cyclists, a simple walk on Boxing Day isn’t going to cut the mustard (or anything else you’ve been feasting on).

As you would imagine, at CTC we heartily advocate a family outing on two or three self-propelled wheels. This Christmas, though, we would recommend a ride with a twist, one to set the brain whirling, so step away from the Monopoly board and get cycling.

The perfect way to do this is via a cycling treasure hunt. It requires a little work, but gives the chance for the whole family to rediscover your local area and work together towards the final destination. There’s no need to race (unless you’re all very competitive!) but you will soon find the hours fly by, particularly if you have a fiendish route setter and clue giver!

It was muddy good fun and a great way to cover a number of miles, without even realising it.”
Tony Upfold,  CTC Communications and Media Officer

At CTC, we wouldn’t recommend to others something which we have not had the courage to try ourselves. Therefore, CTC asked resident quiz queen and doyenne of the local trails, Julie Rand, to put together a festive-themed treasure hunt for two members of staff: Tony Upfold and me.

Heading out of our office in Guildford shortly after 1pm with a set of clues and a map of the local area, the sky was already bruised and the pressure was on to try and finish the route before darkness truly set in. The only problem was that we were struggling with our first clue, and the second and then the third…and well, you get the idea!

However, while we cannot claim to have the finest minds within the organisation, we certainly possess some fine lateral thinking skills and, after shamefully getting a little lost in practically our office’s back yard for about an hour with the first 10 questions, we soon found ourselves on more familiar (and in this case slippery) turf, namely the seasonally-appropriate Christmas Pie Trail.

The Christmas Pie Trail is a leisurely trail which is largely off-road as it runs from Wood Street Village just north west of Guildford, across to Farnham. For much of the way, it’s a charming wooded route, well-signposted and with a number of equally festively-named places along the way. At this time of year, particularly after the weather we have been enjoying, it is also rather muddy – the amount of which Tony and I had vastly underestimated.

Still, in the spirit of adventure we ploughed on through the mud with our rear wheels wagging like an excitable Labrador’s tail, and, through that classic combination of luck and misadventure, found our final stop on the outskirts of Farnham.

As Tony said after the ride: “It was muddy good fun and a great way to cover a number of miles, without even realising it.”

If you’re looking for inspiration for your Boxing Day treasure hunt, take a look at Julie’s top clues and set about making your own festive fun! Should the treasure hunt bug have grabbed you, then you might like to consider CTC’s country-wide challenge: the British Cycle Quest. 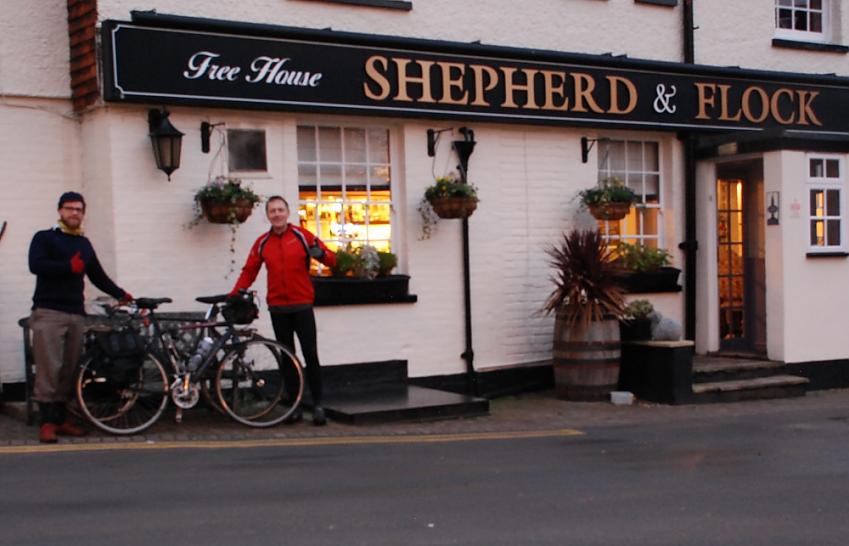 Muddied but not defeated at journey's end!

How to organise a cycling treasure hunt View
Cycling UK continues to support the UK to cycle
This remains true during this difficult period with the ongoing threat of coronavirus Covid-19
Read our latest advice on cycling
Join Cycling UK to help us change lives and communities through cycling
Membership gives you peace of mind insurance, discounts in cycle shops, rides & routes
Join now