Backing for Boris's 'Crossrail for Bikes'

Backing for Boris's 'Crossrail for Bikes'

Boris Johnson's plans for two iconic cycle routes through Central London may not be perfect, but their sheer boldness deserves our overall support.

Transport for London has now unveiled detailed proposals for two proposed cycle routes across London.  One runs east-west from Tower Gateway to Paddington and on to Acton via the A40 flyover.  The other runs north-south from Elephant & Castle to Kings Cross.

There are plenty of things about both routes that I feel could be better.  But the things that stand out about these proposals are that:

For a mayor who initially wanted us all to believe he could "cyclise London",despite also being determined to "smooth the traffic" (i.e. to maintain the capacity of London's roads or junctions), this is a huge step forward.

Make no mistake: there will be plenty of organisations who will offer tough resistance.  The RAC Foundation and business group London First have both voiced opposition to the BBC already.  This is exactly why our overall response needs to be a positive one. (Post-script: CTC's response has since been submitted)

That doesn't mean we should hold back on pointing out what improvements can be made - and there are plenty of these.  But we must do this in a way that doesn't obscure the overall message: the sheer boldness of Boris's proposals is hugely welcome.

The best elements of the proposals are on the east-west route.  Cycling along the two-way cycle track beside the Thames on Victoria Embankment will doubtless be sheer joy. 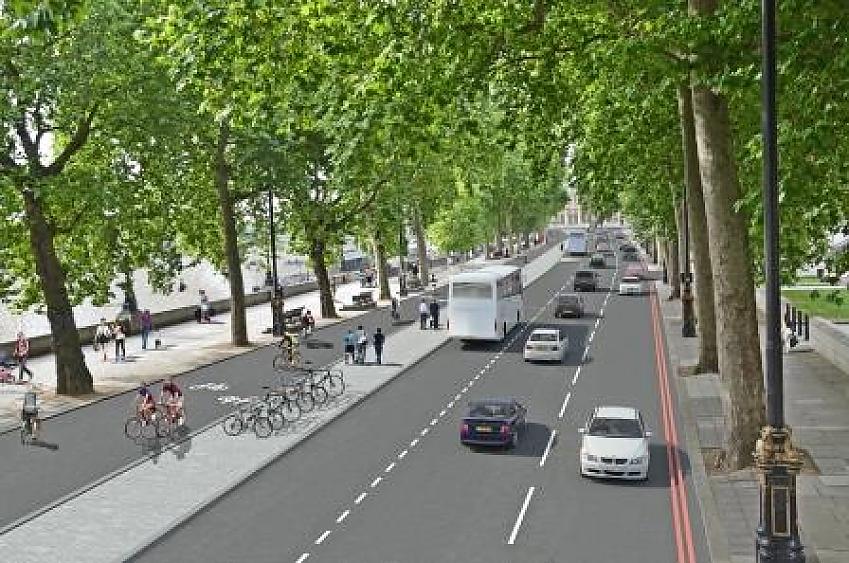 Then there is a stroke of genius at Blackfriars Bridge, where the east-west and north-south routes cross.  The down-ramp from the bridge onto the embankment is to become a cycle-only link, with motor vehicles travelling two-way on what is currently the up-ramp.  The junction also allows the two-way cycle track to switch from the Thames-side (i.e. the south side) to the north side as the route passes through the city. 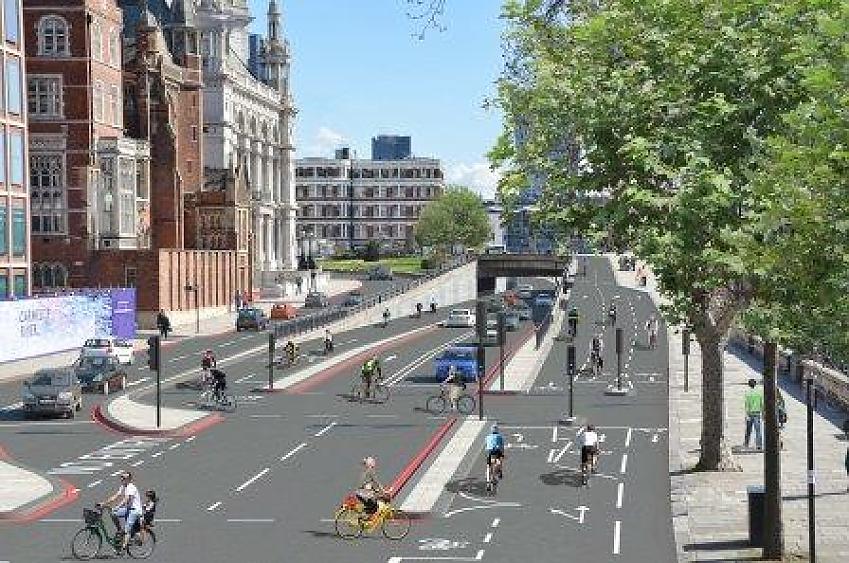 Less good: the two-way track on the north-south route

I have to say I am less impressed by the idea of a two-way cycle track on the north-south route.  The Dutch cycling design guidance notes that two-way cycle tracks can lead to cyclists entering junctions from the opposite direction from where drivers are expecting them.

It doesn't rule them out, advising that they can be useful where this shortens the route for cyclists, where it saves them from having to cross a busy road twice, or where there isn't enough room for a cycle track on both sides.

The east-west route fits the bill, given that the Thames itself limits the number of junctions where drivers or cyclists need to turn across one another's paths.  However the case for having cyclists travelling southbound on the "wrong" side of Farringdon Road / Farringdon Street and Blackfriars Bridge road seems far weaker. 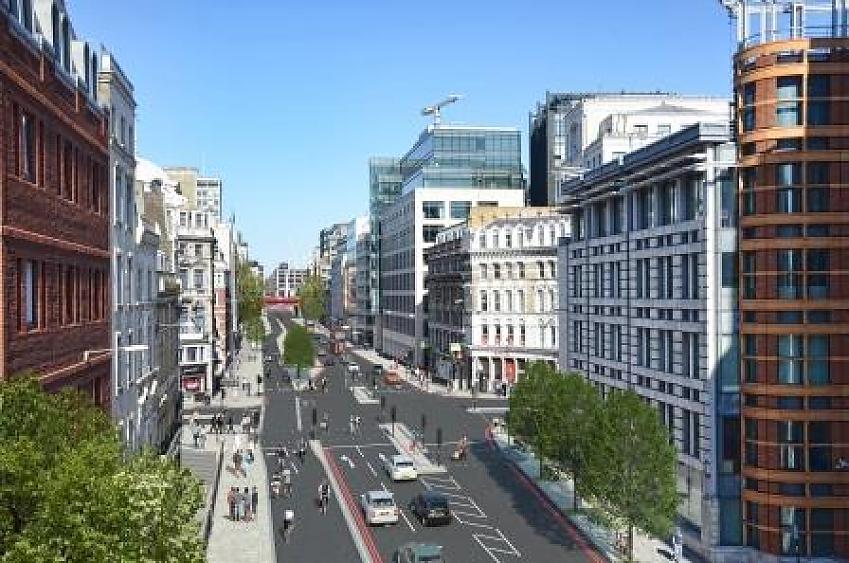 There are obvious risks of drivers emerging from side-roads failing to look in both directions. 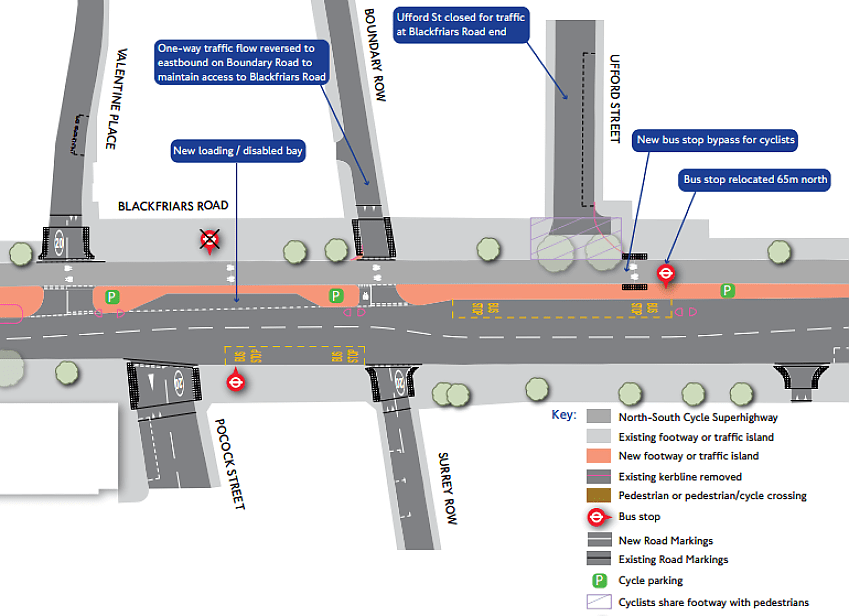 But think too about what it will be like trying to turn left (from south to east) from Farringdon Street towards St Paul's (previous photo), or from Blackfriars Road into either Southwark Street (map below) or Union Street (right outside Transport for London's own head office!). 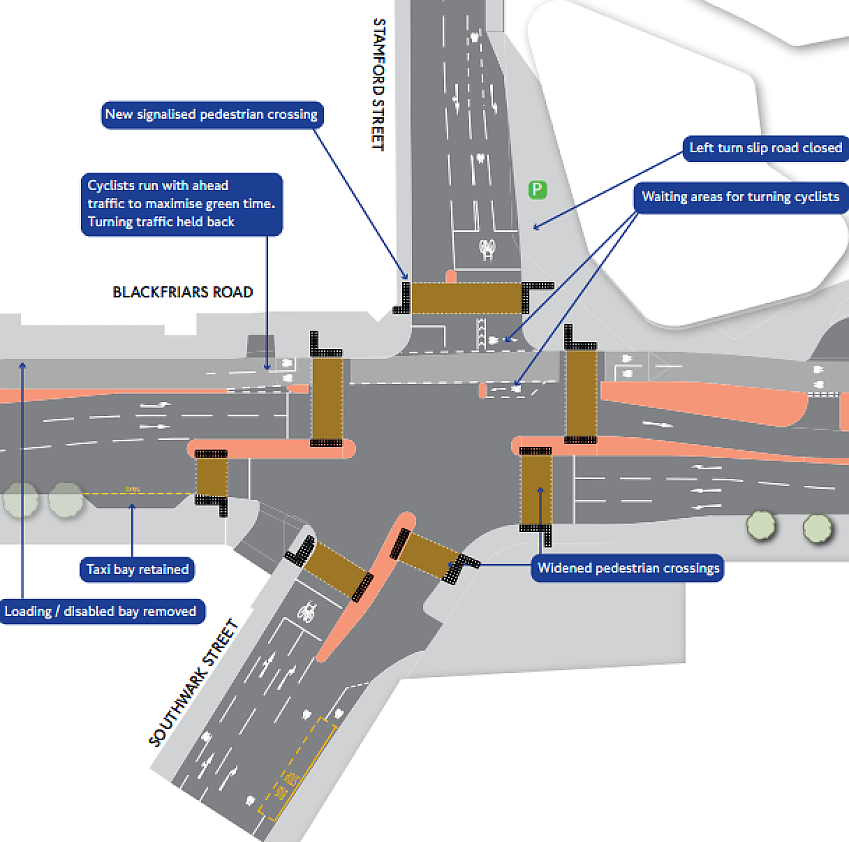 It also necessitates a really fiddly dog-leg for cyclists to travel the 300m or so from St George's Circus to the Elephant & Castle. 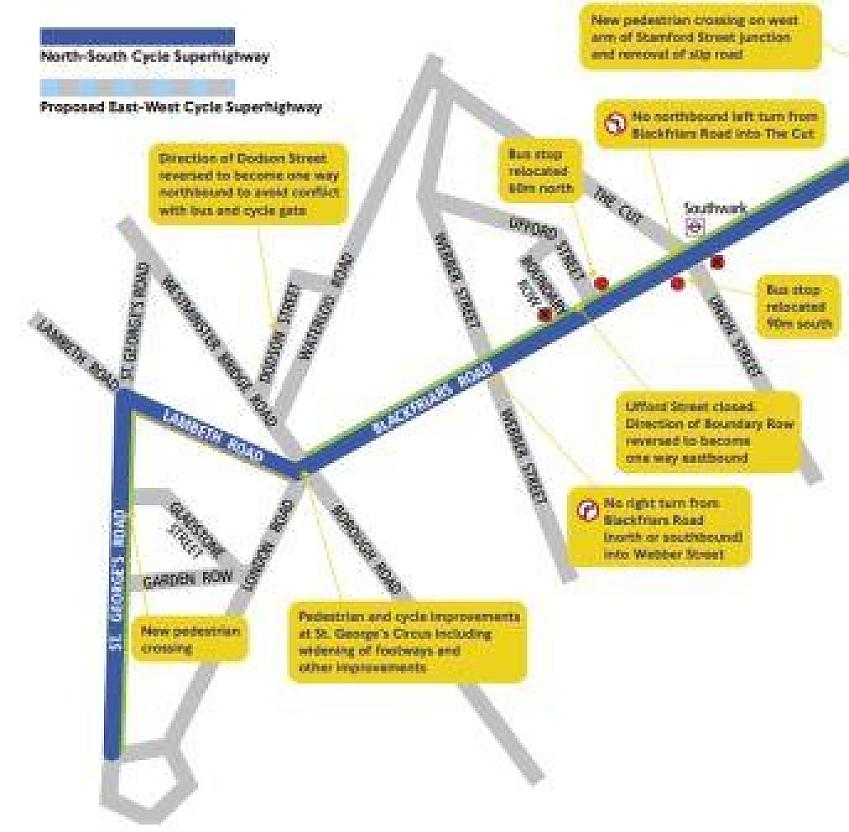 Anyone whose cycle journey starts and ends on the east side of this corridor - say, a journey from near Smithfield to Borough - is unlikely to want to cross the main road twice, only to have to run the gauntlet of drivers pulling out of side roads without looking both ways.  I fear that, as things stand, we could see a lot more aggression from drivers wanting these southbound cyclists to stay "out of my way - you've got an expensive cycle track over there, why don't you use it?"

If Transport for London does end up intalling a 2-way track (and I hope they can be persuaded to go for a better solution), they should at least also provide a cycle lane on southbound carriageway, so that drivers know that cyclists may have good reasons to prefer that option, and are entitled to do so.

Key junctions: could be bolder

I also hope we can encourage TfL to be bolder at some of the major junctions on both routes. In particular, Parliament Square still looks far too much like a motor-sports circuit: 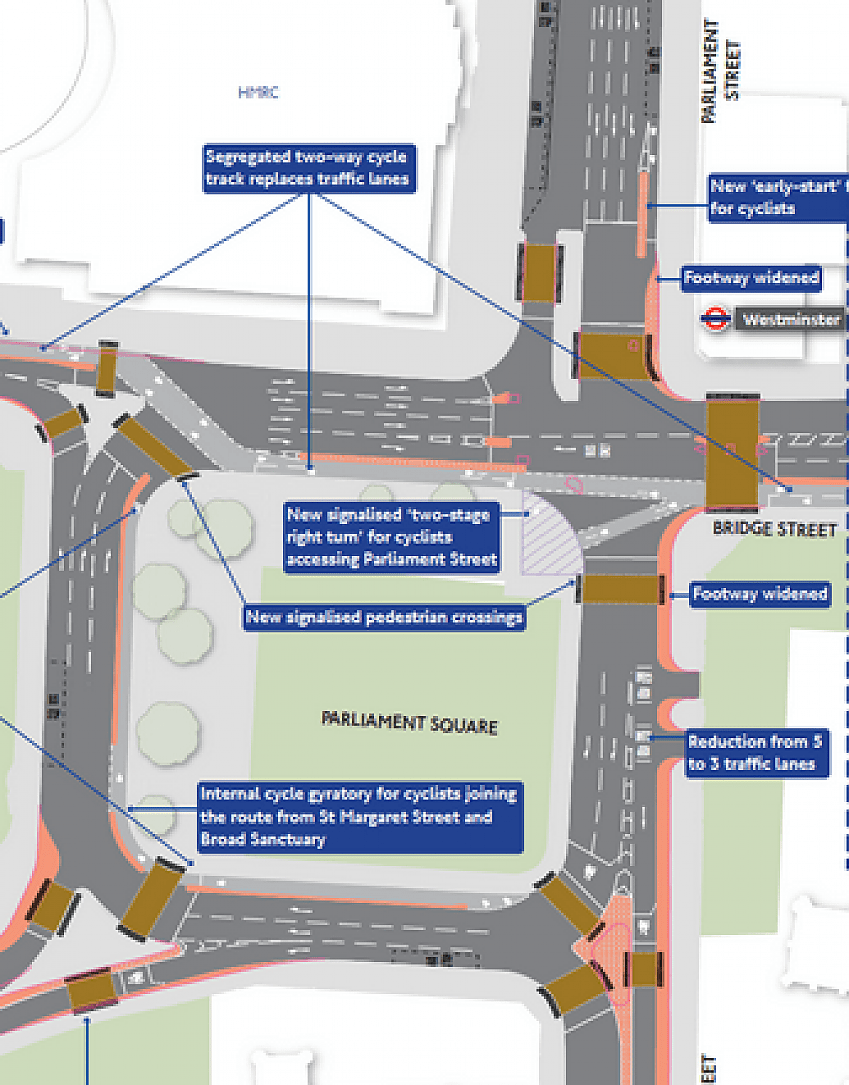 TfL needs to think about ways to break up the flow of through-traffic along the Thames north bank from Pimlico to the City - how about a bus gate opposite the Victoria Tower (the tower at the southern end of Parliament - Big Ben being the northern end)?  That would not only make it far easier to give cyclists a direct route from the Embankment through Parliament Square to Birdcage Walk, but would also create opportunities to redesign the square as the UNESCO World Heritage Site it's supposed to be.  It would also fill in the missing link with Cycle Superhighway 8, which currently gives up at the Lambeth Bridge northern roundabout, just half a mile up the road!

There is a similar need for greater boldness at Lancaster Gate and at Tower Hill - another prime tourist site desecrated by a 1960s intersection of several multi-lane race-tracks.  The artist's impression of the road going past the Tower itself looks wonderful.  But you'll still have to get through a monstrous junction to get there! 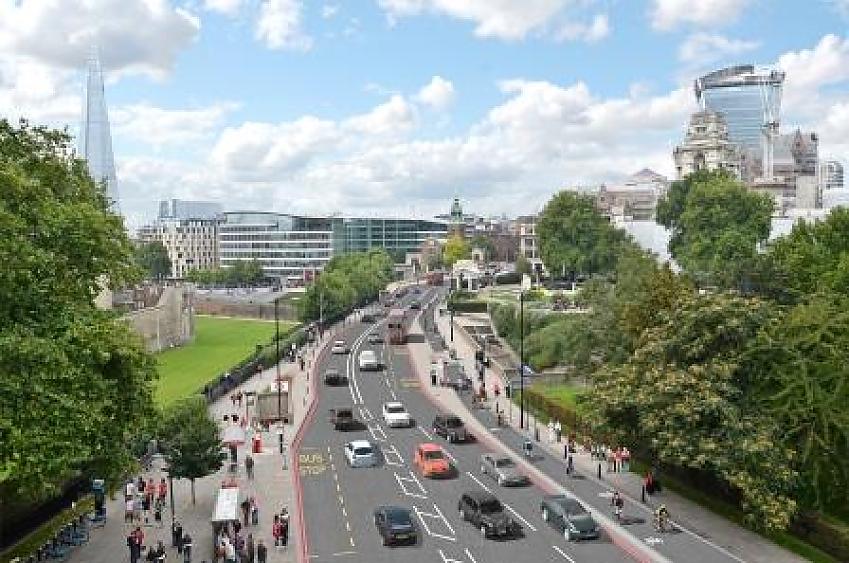 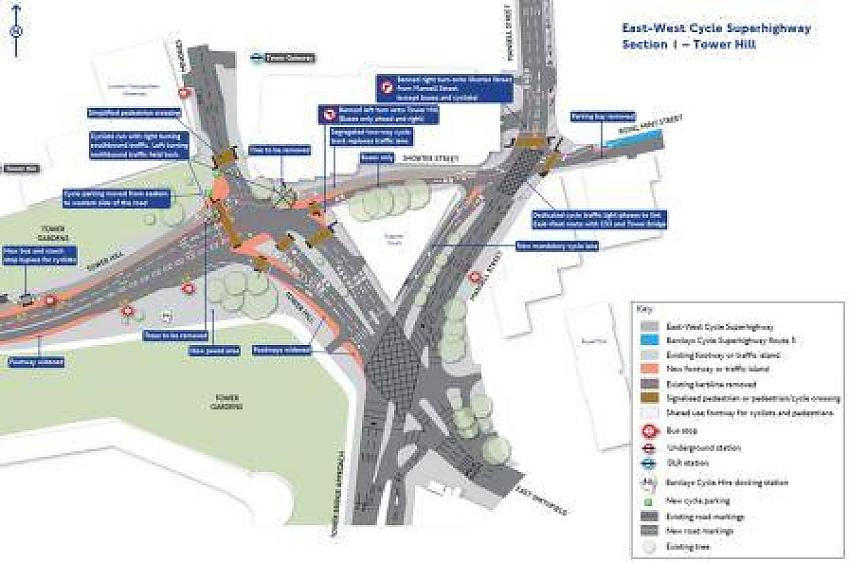 To be fair though, even the best schemes could be better if only they went a bit further - and a bit further and a bit further still!  The reality of course is that there is only so much you can do in one go.  Each step (or pedal-stroke) along the way - from the London we now have to the "cyclised" London Boris aspires to create - will inevitably be imperfect.

But there will be voices, like the RAC Foundation, who would rather those steps weren't taken at all. Their opposition has to be resisted - and TfL supported when they find themselves facing down that opposition.

So, whatever reservations we have about the details - and there will doubtless be plenty of quibbles about detail once we start looking more carefully at the plans - our overwhelming response needs to be a positive one.

But do please comment below, let us know what you think.  Your views will help inform our response. (Post-script: see link below to our submitted response).

I agree, I think Boris is

I agree, I think Boris is being bold compared to many of our politicians, unfortunately not bold enough, however there might be another approach to making space for cyclists, that is by legislation to dramatically reduce air pollution in our towns and cities. For example Boris or the next Mayor should double the geographic size of the CCZ and raise the daily fee to at least £30/day, more money in the coffers and might mean that half the current car drivers become cyclists!

As a visitor to London, we

As a visitor to London, we recently cycled into London for the Prudential Free Cycle event - which was excellent. We stayed at Dobbs Weir campsite in the Lea Valley and cycled along the Lea Valley using the Sustrans Maps. We then were obliged to transfer onto the Transport for London maps. Not too bad coming into London as we headed for known centres of gravity. Cycling back was a nightmare as we constantly had to refer to a very "busy" TfL map, confusing signage and Google Maps on my iPhone... Not easy in busy traffic...

So, here's my suggestion:

Taking the iconic London Underground map as a model, devise something similar for cycle routes. i.e. colour-coded routes and signage; and named interchanges (hubs or nodes). For example, the new east-west route would approximate to a combination of Central (red), Jubilee (silver) and Circle (yellow). The north-south route might approximate to the Northern Line (black). The details would need refining but the principle is there. The standard graphics could then be used by all map producers.

Perhaps other cities and towns could adopt a similar idea so that east-west is generally red, north-south is generally black etc - wherever you are in the UK.