In the late ’80s I was sitting at the lights in my Peugeot 205 GTI - all black, red interior, integrated cassette tape holder, 0-60mph in 7 seconds. In my rear view mirror my Greenpeace car sticker caught my eye. I was struck by the absurd hypocrisy, so on impulse I sold the car and kept the sticker.

With some of the money from the sale I went to see Norman Tierney, the late, great Liverpool-based framebuilder, and he built for me the bike I still ride to this day. My Tierney tourer - 531 Reynolds tubing, all Campagnola, brown leather Brooks Swift saddle, no integrated cassette tape holder, 0-60mph very much dependent on incline and wind direction. It was one of the best decisions of my life. I became calmer, healthier and wealthier.

Always with my trusty steed, my work as a TV presenter and actor randomly takes me all over the country, sometimes not alighting the train in the same place again for 10 years. So what has changed from the view over my handlebars in that time? Depressingly, very little, but there are some bright spots. Most places have done a little very slowly, but some have made real progress.

York was an early pleasant surprise. Bristol, too. But both now have the feeling of places where politicians had a vision, took the accolades, then turned to some other grand plan. Recently Newcastle has come on leaps and bounds, and Hull also deserves a mention. Manchester is moving quickly too.

Leicester was astonishing, when I revisited after a five-year absence. To find a city centre bike lane right at the entrance to the station, then onto a developing network reaching out into the suburbs, was inspiring and shows what can be done relatively quickly. 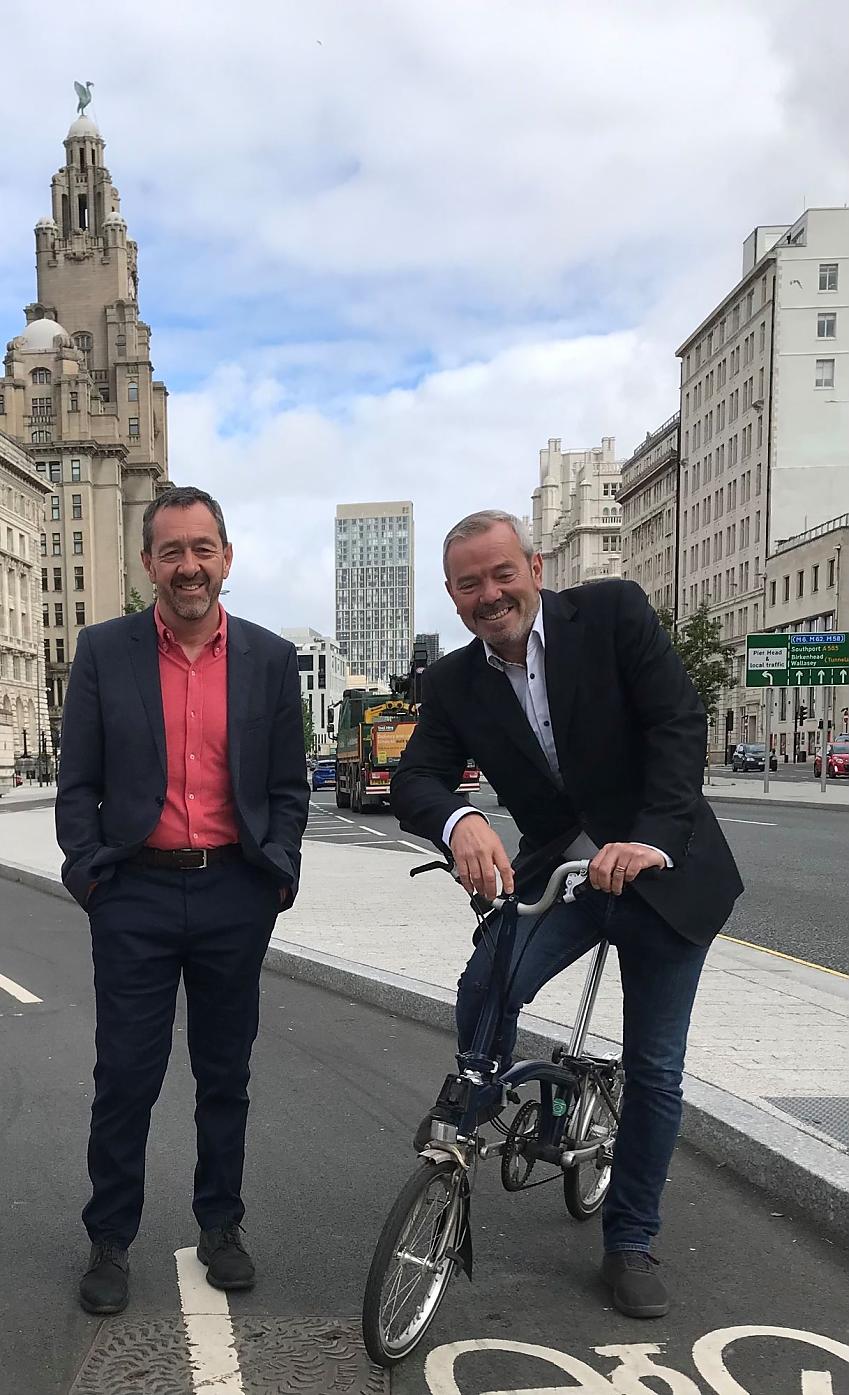 It is, though, the capital where the landscape has changed unrecognisably. When I first rode around London in the ’80s I was a crazy lone stranger. Although the air was literally toxic, it perversely always felt quite safe as the bumper-to-bumper traffic could only crawl along at 10 miles an hour.

My agent in Soho complained bitterly about the introduction of the congestion charge. A few years later as we strolled through the now quieter, cleaner streets of the West End she admitted that she had been wrong. Along with the continual introduction of traffic calming on side roads, in the last 10 years Transport for London (TfL) has put in proper infrastructure, and the explosion in cycle commuting has been extraordinary. Build it and they will come.

All this experience I now apply to my role as Liverpool City Region active travel commissioner. When local politicians and planners say ‘yeah but it’s different on the Continent’, I point out that it’s now changing around our own country too. I have seen it.

My vision for Liverpool City Region over the next five years is to see existing ‘photo-opportunity’ infrastructure be coherently joined up, and then a true commitment and consultation for a wider comprehensive network, with the same London-style roll-out of quieter neighbourhoods either side of this network. Not rocket science - just playing catch up.

However, I come from a media background, and this is where I believe the real challenge lies. On holiday this summer, my family and I spent four nights at a Eurocamp camping resort in northern Spain. This got me thinking deeply.

Nearly everyone arrives by car, most take bikes on racks too, and as soon as people go through the gates something changes. Drivers who would normally swear at anyone walking in front of them, sit patiently until those people have wandered out of the way and they can pass. Pedal pushers don’t aggressively hold their primary position and also defer to pedestrians.

In this country families pay a lot of money to go to Centre Parcs so the kids can wander freely without fear of death. ‘It’s different on holiday’ doesn’t explain it. Visiting Waltham Forest Mini Holland, the image that stayed with me was a couple of chatting mums with prams, toddlers in tow, walking casually down the middle of a normal suburban road. There is a mental realignment of even the most selfish macho individuals in the right collective environment.

Through media and messaging, let's challenge the ‘us and them’ nonsense peddled by sections of the press. Ignore the vicious war of words on Twitter. Instead use every platform to push the possibility of a more relaxing, happier urban space from the moment we step out of our front doors. My vision for Liverpool is to make it feel a bit like being on holiday every day.