Despite an election pledge to invest, make it safe and connect cycling across Northern Ireland, Minister O’Dowd seems unable or unwilling to follow through on three decisions which should be the start of our journey to increased numbers cycling, says Andrew McClean, Cycling UK’s engagement officer for Northern Ireland

Having spent the last three months corresponding with our Department for Infrastructure (DfI), asking them to follow up and follow through on three decisions which would improve provision and safety for people cycling across Northern Ireland, I have come to the disappointing conclusion that ‘progress’, or even the illusion that we want to keep up with others, is not something the Minister is able to manoeuvre the department towards.

Active travel should be a gemstone to any minister in the DfI and the department more generally; it has clear cross party-political support. Every party represented at our hustings this year gave broadly the same proposals, and importantly, all agreed the need to increase the number of people walking, wheeling, and cycling.

More than half of MLAs elected to the Assembly signed our pledge calling for the department to invest, connect and make active travel safer across Northern Ireland. These MLAs include the Minister himself, all 27 successful candidates from his party, Sinn Fein, all 17 Alliance MLAs, and the leader of the DUP, Jeffrey Donaldson, who “fully supports greater focus on active travel”.

It would be hard to find a better mandate, with more cross-community support, than for increasing and improving active travel.

Why then does it seem the Department for Infrastructure wants to block progress every step of the way? Surely, it should be supporting the Minister to make good on his election pledges? 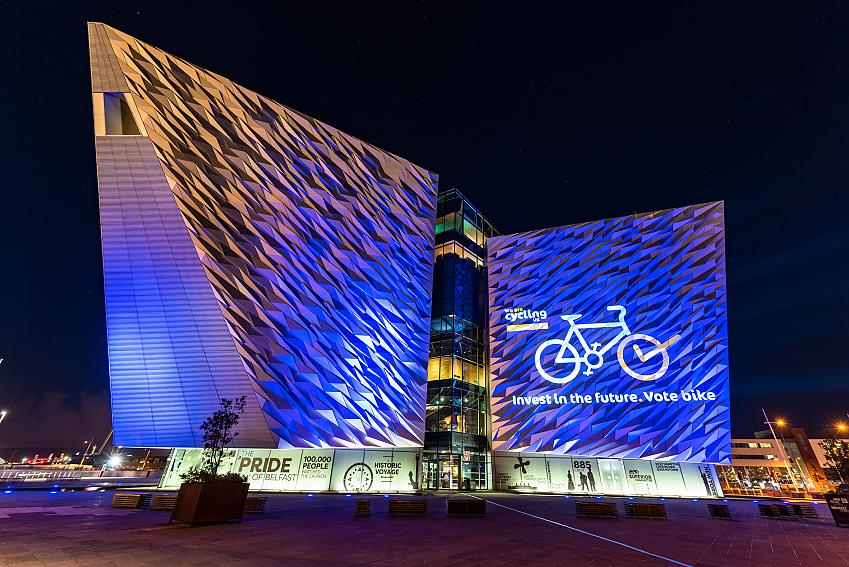 The first, and most wide-ranging matter we pressed the Minister and department on was the Active Travel Act. The primary job of the Assembly is to pass legislation, which it did very successfully this year with the Climate Change Act. This showed us how to be bold, urgent, and work together for progress.

An Active Travel Act is the natural progression of this. It is clear for anyone to see that, for our health, air quality, economy and our enjoyment of public spaces, we cannot fall any further behind our neighbours.

I was in Dublin last week and witnessed first hand the changes being facilitated in how people move around, the numbers cycling during rush hour, the parents on cargo bikes dropping their kids to day care.

These were not common sights five years ago. The infrastructure isn’t perfect, but they are investing, building and supporting people to walk, wheel and cycle.

We have no choice but to do the same. The Act could set targets for the Department for Infrastructure and across the civil service, which they have a statutory obligation to meet, meaning they must make changes and invest now.

We asked the Minister directly three times whether he intends to move the department forward on investigating an active travel act.

According to the department in their latest letter: “The Minister’s commitment is to consider taking forward legislation to support active travel, not to an Active Travel Act per se.”

For the avoidance of doubt, the pledge Minister O’Dowd signed states:

“If elected, do you pledge to support:

Which is about as unequivocal as it gets.

We understand that without a sitting Assembly this legislation cannot be passed, but the process will take several years, and the Minister is very able to instruct the department to start consulting on what the Act can, and should, contain.

The second matter we put to the Minister was the recent changes to the GB Highway Code, which was ground breaking in its recognition that there is a ‘Hierarchy of Road Users’, along with measures which should reduce more common collisions between pedestrians, cyclists and drivers.

It is usual for such changes to be adopted into the Northern Ireland Highway Code not long after GB, occasionally with some minor differences. The Minister confirmed it is a matter he has the power to sign off on.

In a letter from DfI in August we were informed that: “The Minister is still determining priorities for this department.” Given the Minister’s tenure will end in a couple of months, setting priorities is long overdue. If we miss the chance to even consult on the changes, yet again any progress will be greatly delayed.

The third matter we pressed Minister O’Dowd on is signing off on the Limestone/Cavehill Road trial cycle lane in North Belfast. The DfI has already completed a second consultation in the space of a year, without any decision.

We were told at our meeting in June that the consultation was with the Minister for a decision, and a follow-up letter informed us that we would receive an update by the end of July. It was on 24 August that we eventually received the news that the Minister is not going to be making a decision, instead putting the cycle path out to a further consultation which will take place after his role finishes.

The apparent need to consult for a third time is “following initial objections to the construction of Phase 1 of the pop-up Cycle Lane on the Limestone Road, the Minister has asked officials to review the scheme and initiate a new consultation process with residents, local stakeholders and local cycling campaign groups”.

Given these objections were there for the first and second consultations, it really does make us wonder what they expect to find out by going back to the same people for a third time. Remember, this is a ‘pop-up cycle lane’, a temporary measure to assess the viability of a longer-term solution.

A cynical person might say that Minister O’Dowd is simply unwilling to make what is arguably a difficult political decision, but surely that’s what being in that position is all about. This lack of decisiveness leaves adults and children who live in north Belfast with no protection at all when they take to the streets on their bikes.

This means it will take even longer before we start to see cleaner air, liveable neighbourhoods, healthier people and a reduction in emissions from motor traffic. It is admitting that all the talk from the department on increasing the number of journeys by bike has no substance behind it.

They are unwilling to move forward in the only direction that makes sense for us all, due to the slightest bit of criticism. If the department is not prepared to be bold and take decisions, it will be impossible to realise and deliver the vision of the Belfast Bicycle Network Delivery Plan, let alone active travel across Northern Ireland.

I’m sure the DfI sees the same videos and read the same statistics I do, of London, Dublin, Paris and beyond. The videos showing what ‘rush hour’ can look like if you shift people out of their cars, the statistics which show how much more efficient cycling is for mass transit, the sights of the children getting to school without parents needing to park on the footpaths of busy residential streets.

These cities invested the capital costs, and they are investing the resources to maintain the shift.

Cycling is still seen as largely a leisure or fitness pursuit in Northern Ireland, this is obvious from the little infrastructure we have. It doesn’t feel safe sharing the roads and it puts the vast majority of people off cycling as a form of transport. But we don’t have the power to make it safe, we can’t vote for the next Infrastructure Minister, we don’t brief the Minister, or work out how to implement their decisions.

We need the Minister to make decisions, not put them off, and we need the department not to block these decisions but make them work. Current and future ministers need to focus on shifting the needle drastically towards building for, and encouraging, active travel, because currently it is stuck in the past and the gulf between Northern Ireland and our neighbours is widening.

It is no wonder that many in Belfast City Council wish to devolve transport powers to local councils. Councillors clearly feel the DfI that holds the power to make change happen isn’t using it constructively or widely enough, and they want progress now.