Dare we say it, active travel was the real winner in this election. Andrew McClean, Cycling UK's engagement officer in Northern Ireland explains why an Active Travel Act is the way forward for the nation

With 48 (over half) of the winning candidates having signed up to our three pledges, every constituency from the Glens of Antrim to the lakes of Fermanagh representing Sinn Fein, Alliance, DUP, SDLP, People Before Profit and Independent Alex Easton (see the full list below) there really is a broad consensus on the way forward for transport.

We also had a Hustings event where candidates from the six largest parties in the previous assembly unanimously agreed on issues from an Active Travel Act, to 20mph speed limits in residential neighbourhoods, and the need to reduce the dominance of the car in our town and city centres.

Another real highlight of this election campaign was the response to the images and messages we projected on buildings and sites around Belfast, they sparked a conversation and a realisation that cycling can make a real difference to the lives of individuals and our society at large. It isn’t the solution to everything, but, supported in the right ways, it can be a big part of it.

We can’t pretend that there aren’t wider political issues and barriers to an Assembly being formed in Northern Ireland, but we can focus on what this political consensus can lead to for walking, wheeling and cycling.

Agreement isn’t something we are used to in our politics, so we the people need to make sure this agreement turns into action.  Cycling UK will be contacting candidates and parties to remind them of their pledges, and, when an Assembly is formed, we will be asking all ministerial departments in the executive to build walking, wheeling and cycling into their plans. 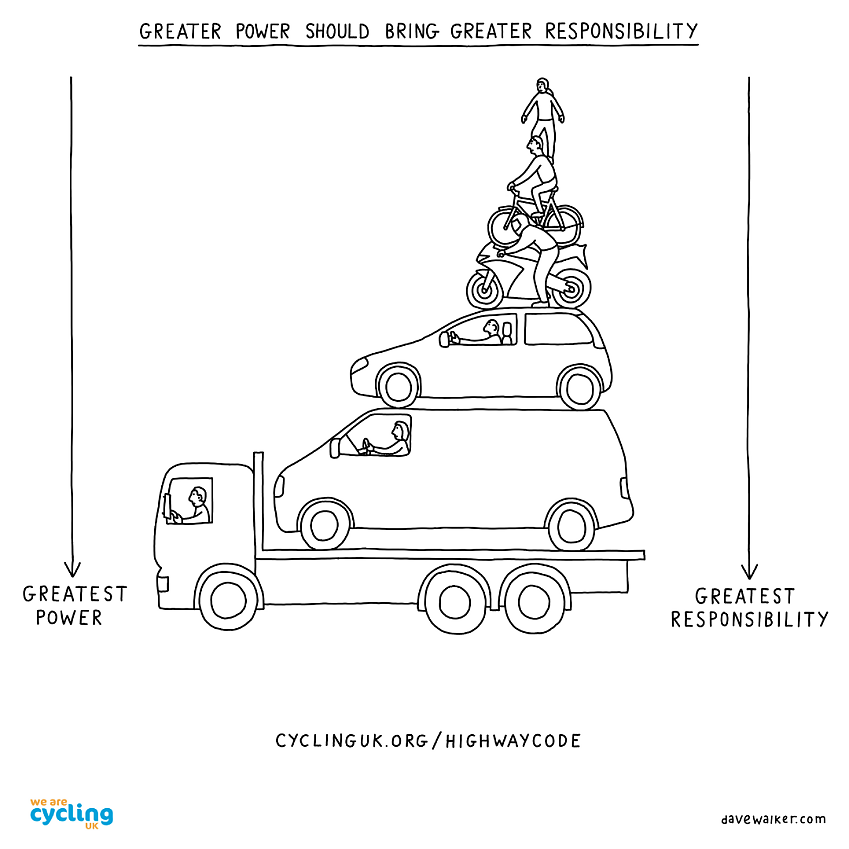 First up for us will be safety for vulnerable road users.  As we have often repeated, the statistics are clear, if you are inside a motor vehicle you are incredibly safe, we need to shift the focus to protect other road users.  We will be calling on the Department for Infrastructure to implement our response to the Road Safety Strategy consultation.  Further to this we will be asking the Minister to adopt the GB Highway code changes as soon as possible, creating a ‘Hierarchy of Responsibility’ where road users that can cause most harm are also the most accountable.

Secondly, we will be calling for the Minister to immediately begin the implementation of an Active Travel Act, making active travel a statutory consideration for Stormont, Councils and Ministerial Departments.  We will be presenting our thoughts on what the Act should contain through consultation with the architects of the Act in Wales, local campaigners, and groups representing walking, wheeling and cycling across Northern Ireland.

An Active Travel Act was one of the major agreements to come out of the hustings event with returning Sinn Féin MLA Philip McGuigan pledging to introduce the Bill as a Private Members Bill if there isn’t sufficient progress from the Department for Infrastructure.

Lastly, we will be campaigning to ensure the 10% commitment of the transport budget (proposed by returning Alliance MLA, Andrew Muir), going on active travel is not only allocated and spent, but spent meaningfully, in a way that will allow people to consider using alternative forms of transport.

Along with signing our pledge, Jeffrey Donaldson, DUP leader and newly elected MLA stated ‘"I believe the next Assembly will focus on delivering a better infrastructure to encourage active travel. Let me assure you that the Democratic Unionist Party will play its part".

We agree with Jeffrey, we want safe, segregated bike lanes built across Northern Ireland, and we want the Belfast Bicycle Network plans to be brought forward and delivered in a shorter timescale. We no longer have the luxury of waiting, it's now or never for cleaner air, lower emissions and a Northern Ireland that puts people at the centre of our towns and cities.

Now is the time

The best time for bold action is immediately after an election, energy for change is higher both from newly elected politicians and the public, and they have several years for those changes to make a difference before the election cycle comes round again.  We will be reminding the successful candidates of this - if they wait too long there will be no time for them to create a legacy of change to stand on.

It is time for us too, with the publication of the Belfast Bicycle Network Plan, and the funding commitment for active travel, we need to start showing there is a need for implementation.  We need to have answers to the challenges, and we need to engage businesses and locals in conversation to show the positive impact Active Travel can have in our communities.

If you want to be part of the change join the Cycle Advocacy Network in Northern Ireland to link up with others in your area.

Elected candidates who have signed the pledge:

The Minister with the only key, refuses to unlock the potential for cycling across Northern Ireland View

Cycling UK and ECF to work together View