World Heritage sites, Hollywood blockbuster sets, the Giro d’Italia, whiskey and one of the most stunning coastal roads in Europe – Northern Ireland’s North Antrim Coast Road has it all. Cycling UK member and cycling journalist Patrick Trainor shares one of his favourite cycling routes.

This ride may be called the Giant’s Causeway ride but that is just one part of it. There are long exposed hills, brutally steep short climbs, flat and gently rolling sections through farmland and several stretches of amazing coastal roads.

Starting at the seaside in Ballycastle (approx 56 miles / 90kms north of Belfast) and heading north west following the coast, the slight rise out of the village is best taken at a moderate pace as it’s going to be a long day and is a good warm up. The view which opens out from the top is staggering and sets the tone for the first part of the ride. The road hugs the predominantly flat coast for the next 10 or so miles (16kms) and the landmarks soon start appearing.

Coming into Ballintoy there’s a very tight downhill left hander and right on the bend is the car park for the Carrick-a-Rede rope bridge but it’s a fair walk down especially in cycling shoes.  What is probably more appealing is the little cafe in the village which is cyclist friendly. Look around and you’ll also spot some pink reminders of the Giro d’Italia when it passed through here in 2014.

Rolling along you pass the beautiful beach at Whitepark Bay then the ruins of Dunseverick Castle before coming to the feature that gives the area its name, the World Heritage Site The Giant’s Causeway. Here the hexagonal rocks jut out into the Irish Sea in amazing patterns and I’ll let you look up how they were formed as there is some debate involving giants fighting hence the name.

Downhill into the town of Bushmills and the sweet warm smell of whiskey from the distillery immediately hits you. They have been making whiskey here for hundreds of years and if you have time the tour is well worth it just make sure you have someone to take you to your accommodation if you do!

Turning inland on to quiet back roads just after the distillery the terrain stays flat through the farmland and soon you’re at the Dark Hedges, a road which is lined with birch trees whose tops intertwine. This little country road was a single track road up until a few years ago which few people knew about until it was used in the blockbuster TV series Game of Thrones. It was widened to accommodate coaches and the many tourists who come to see it but is now closed to motorised traffic to safeguard the trees. Just for reference, it’s a dirt road in the series but tarmac in real life so don’t worry about your tyres.

Once you get to Armoy you have several options. For a 38 mile (61km) ride head straight back to the coast to Ballycastle to finish. Or turn head east and take the Glenshesk Road to join the Coolkeeran Road for the moorland section of the ride. If you want a lunch stop you could head to the Ballycastle then come back inland to this spot which will add approx 15 miles (24kms) to your total distance.

Continuing east from Armoy you soon enter moorland which is beautiful in good weather but on a bad day can be brutal. The long drag up to Orra Forest isn’t very steep but does go on for several miles. It’s one of those climbs that eventually creeps up on your energy reserves you as it’s long rather than steep but the view from the top across the bay is worth it. What goes up must come down and the descent back to the coast into Cushendall is great fun. Just watch out for loose surfaces, sheep and the few tight bends but overall a fun and exhilarating drop back to the coast.

Hitting the sea at Cushendall, turn north again but if you have the time it’s worth taking a quick detour south for a few miles along the coast road to Glenariff to take in the stunning scenery of this huge natural amphitheatre between the steep green slopes and the sea. Heading north along the coast out of Cushendall, the climb out of the village is worth it for the twisty steep drop into Cushendun which is rewarded with a beautiful view of the tiny bay and surrounds. 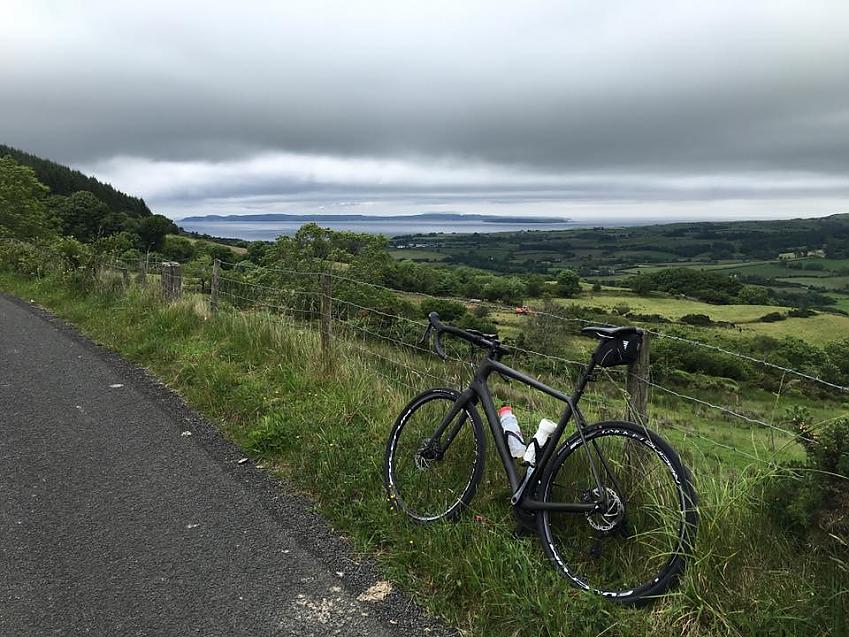 A climb out leads you to a direction sign saying Ballycastle left which is a straight road back to Ballycastle with a steady five mile (8km) climb or Torr Head road if you go right. Torr Head road is a series of climbs with different lengths and gradients and differing levels of severity and shouldn’t be underestimated, especially after the earlier part of the ride.

Torr Head road rolls the entire way between climbs with some sharp descents but it’s a stunning route along the top of the coastal cliffs and Scotland is visible to your right on a clear day. The last climb on this road is most deceiving as it seems a slight rise then all of a sudden there’s a steep S-bend which takes all momentum away. Once over the top the old RAF radar station mast signals the end of the climb. It’s only then that you realise that there are hardly any cars on this stretch of road. Locals avoid it as the main road is quicker and tourists don’t know about it so it’s a real hidden gem and well worth the effort.

The last few miles of the ride are all downhill thankfully as the previous 10 or so miles (16kms) have been hilly; Torr Head Road has an average gradient of 16% with several parts reaching 22%. It shouldn’t be underestimated despite the more undulating nature of the ride up to this point rather than big hills. There’s always the option of missing out the Torr Head road with the long drag back from Cushendun, just make sure you have a low enough gear if you do want to tackle Torr Head.

Ballycastle has several cafes and restaurants, as well as pubs so you’ll have no problem finding refreshments post ride. After this 65 mile (104km) route you’ve earned it!

It’s worth bearing in mind that the weather is changeable at any time of year in this area. No matter what forecast says bring a jacket as the wind of the sea and up on the tops can be brutal and the open moorland mid way through is very exposed.

Conditions: I did this on the best day weather-wise in years so was very lucky, Scotland seemed touchable! The moorland can be very windswept as can the coast road. Descents inland are twisty and road surfaces can be loose also.

Accommodation: I stayed at the Marine Hotel right on the seafront in Ballycastle. There are many hotels and B&B’s in the area including one right at the entrance to the Giant’s Causeway.

Equipment used: Vitus Venon VR Disc – carbon frame and fork, Ultegra groupset, Fulcrum wheelset, mechanical disc brakes and bolt through axles. This was the first time I had tried discs on the road and was very impressed. The bike felt really lively and solid, especially on the front end, without any harshness and for once I was really glad of having 34 front and 28 rear gearing especially on the last climb on Torr Head.

Maps/guides: OS map of Northern Ireland shows the roads or check the GPX file of the route.

I’m glad I had… A compact chainset with a 28 sprocket on the rear for the Torr Head section, the climbs are short but very steep. Also glad I stopped to refill bottles and grab food half way round as the second part of the ride is the roughest and a real sting towards the end.

Next time I would…Ensure I’ve eaten plenty early on and probably stopped for a coffee in Cushendall or Cushendun to enjoy the sea views.
Also make sure you carry cold/wet gear no matter what time of year as it is exposed on the moorland and you don’t want to get caught out in it.

The Minister with the only key, refuses to unlock the potential for cycling across Northern Ireland View