Women can enjoy cycling as much as men so why don't more of them do it?
By Julie Rand
Wednesday, 5 October 2016

The response to events such as 'Women's Sport Week' is often along the lines of "That's all very well but shouldn't women be active every week?", not just once a year. Cycling UK's Julie Rand ponders why encouraging women can only be a good thing, as women currently do far less physical activity than men at every phase of life.

I love riding my bike, whether on or off-road, and so does my 19-year-old daughter (pictured on the left below). It's great exercise, gets you quickly and easily where you want to go, and enables you to appreciate the countryside at all times of the year. Most of all, it's life-affirming and brings about an enormous sense of well-being and joy. However, although recent research has revealed that there has been an increase in women’s cycling in the UK, the fact remains that women are less physically active at most stages of life.

As long ago as 1880 Jeanie Welford joined the organisation as its first female member but, in 2016, only around 20% of Cycling UK members are female and statistics supplied by Cycling UK Member Groups suggest that women are outnumbered by men on most rides by a ratio of about 2:1. This ratio widens with length of the ride and off-road rides have a ratio of about 3:1 male to female riders - for many years, I have been used to being one of only two regular female mountain bikers in a group of ten or so men, often joining them on what would normally have been a 'lads' weekend' away.

The many barriers preventing more women from taking up or keeping cycling include: 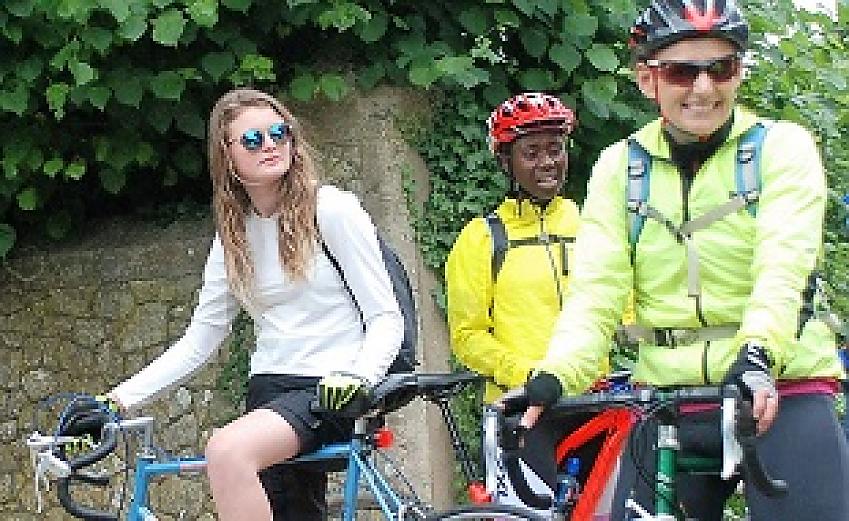 The good news is that things are slowly beginning to change, with a growing number of female-specific cycling groups and clubs, websites, retailers, media, manufacturers and others catering to the female market. Through our local cycling groups and community clubs, Cycling UK provides the chance for thousands of women to take part in female-specific rides and events, which have been shown to encourage many women to cycle who may not do so otherwise. The women involved may not think of this as 'sport' in the schooldays sense of competing (and possibly always losing!) at games. Whatever you label it, riding a cycle with friends or family is healthy exercise, even if it involves large amounts of tea and cake!

Currently, a number of groups offer female-specific riding opportunities, including:

There are other groups of ‘Belles’ affiliated to Cycling UK as groups:

If you can't find a group near you, why not create your own cycling group with Cycling UK's help?

The future is looking very bright for women in cycling as more of them overcome the barriers, whether real or perceived, and enjoy the simple pleasure of riding a bike, tandem, or trike. Many of our Member Group Secretaries, ride leaders and tour leaders are female, as well as a large proportion of Cycling UK staff, including Vice-President Josie Dew. We campaign for better infrastructure, regularly publish articles on ways to overcome the barriers and promote female role models so, perhaps, one day there won't be a need for female-specific groups; but, for now, they are helping bridge the gender gap for those women who want to cycle but wouldn't do so without extra support.

While some women may happily give Rachel Atherton a run for her money, they remain in the minority. Women-friendly initiatives, groups, events and activities are all important ways of redressing the current imbalance in cycling so let's back initiatives like Women's Sport Week - but remind everyone that women should be physically active all year round. And supporting them to cycle is one of the best ways to achieve this.  If you'd like to put on women-specific rides and events, we'd be happy to offer our support with publicity, resources and more. Just contact Julie Rand, Member Group Coordinator or Suzanne Forup, Head of Development for Scotland about Belles on Bikes.