Highway Code changes, what’s fact and fiction? What’s the media misreporting, and how do we rebut this? Cycling UK's head of campaigns, Duncan Dollimore busts some of the myths

The line that a lie can travel halfway round the world before the truth puts on its shoes could have been crafted with the Highway Code changes in mind.

The reporting on these changes should leave some journalists hanging their heads in shame.

Here’s just a few of the myths being pedalled, and the truth, with reference to that document the mis-reporters should possibly have read – that’ll be the actual text of the new rules!

Cycling in the centre of the lane

If you’re driving, you might come across cyclists riding in the centre of their lane, and it’s what they’re advised to do in some situations.

Sadly, many in the media didn’t appear to have the inclination, patience or wit to actually read the new rules, let alone check them against the old rules using the comparison table they were sent with the press release announcing the changes. Some of them just went for a contentious headline, no matter how inaccurate, leading to headlines wrongly claiming that cyclists were being told to ride in the middle of the road.

As explained in our frequently asked questions, changes to rules 72 and 213 don’t actually alter the advice that’s been given to cyclists for at least the last 16 years, through the Government-backed ‘National Standard for Cycle Training’, branded as ‘Bikeability’ in England, which replaced the old ‘Cycle Proficiency’ scheme from 2005. However, for reasons we’ve explained in an earlier article, the new rules were designed to explain to drivers why cyclists might choose to cycle in the centre of the lane in some situations, namely:

Rule 72 also advises cyclists to move over to the left of the traffic stream if faster vehicles come up behind them, as long as they feel it is safe to let them overtake.

So, outrage about cyclists being told to ride in the centre of the road is entirely manufactured by the media, because the advice to cyclists hasn’t changed, merely the explanation to drivers. Sadly, the vacuum created by the absence of a public awareness campaign prior to the changes coming in, and some appallingly bad journalism, hasn’t helped the messaging.

Seldom have so many in the media been so confused about such a simple change to an advisory rule.

So, cyclists have always been able to cycle in groups, with the old rule 66 saying they should never ride more than two abreast, and outlining circumstances where they should move to single file. It just wasn’t particularly well drafted, which fostered confusion, partly because there was no attempt to explain to drivers why people might not cycle in single file all of the time. 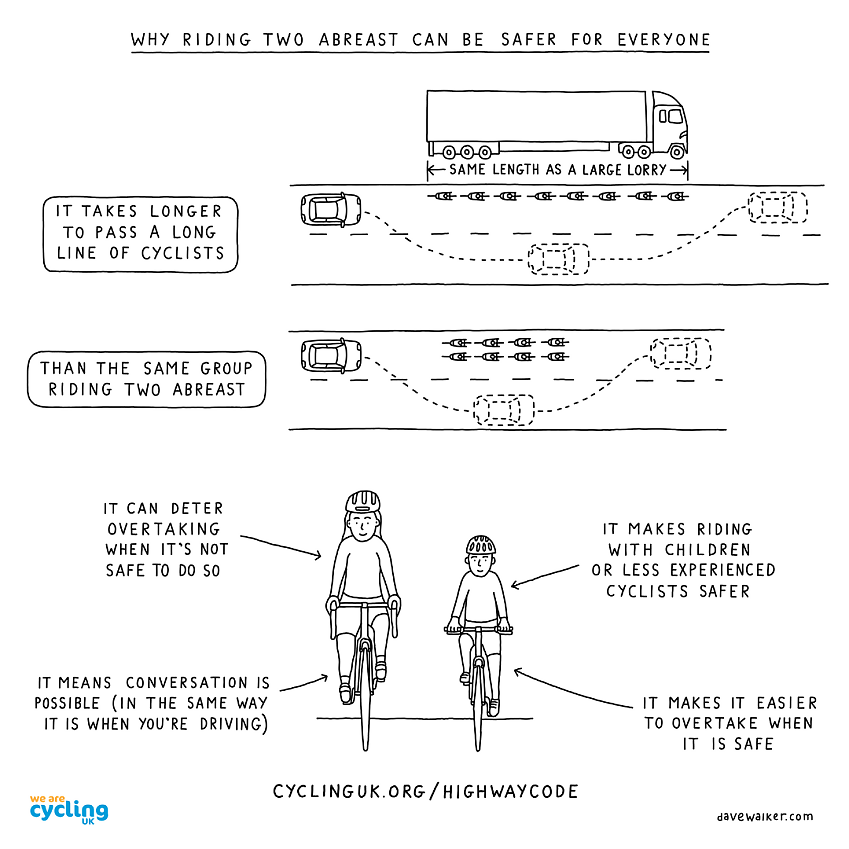 To address this, the new rule explains that cyclists should be considerate of the needs of other road users when riding in groups, but they can (not must) ride two abreast, and that it can be safer to do so, particularly in larger groups, or when accompanying children or less experienced riders.

As we explain in this article, this is one of the rule changes which Cycling UK believes could have been better drafted, though it does provide greater clarity than the old rule, but it’s not revolutionary new advice to cyclists as Mr Littlejohn has suggested .

Opening your car door with the wrong hand!

When we last checked just over a week ago, 72 media outlets had falsely reported that the highway code changes meant that drivers would be fined £1000 for opening their car door with the wrong hand. Sadly, the journalists and editors involved don’t appear to understand the difference between a law and advice.

On 29 January, around 50 changes to the highway code were introduced. None of them created a new offence or changed the law. There are some highway code rules which use mandatory language, like must or must not, but they reflect existing road traffic laws, so before changing those rules parliament would have to change the specific law which the highway code rule refers to.

All of the rules which changed on 29 January were however advisory rules, using wording such as should or should not, rather than must. Those rules can and will be referred to in both criminal and civil court cases, so they are still relevant, but failing to comply with an advisory rule is not a criminal offence per se, and you can’t create a new criminal offence of opening your car door with the wrong hand just by changing the highway code!

As it happens, it’s been an offence under the construction and use regulations for many years to open, or cause or permit to be opened, a car door so as to injure or endanger anyone, punishable with a £1000 fine. New rule 239 includes clearer guidance to drivers and passengers to look around and use their mirrors before opening their car door, and advises that:

“Where you are able to do so, you should open the door using your hand on the opposite side to the door you are opening; for example, use your left hand to open a door on your right-hand side. This will make you turn your head to look over your shoulder. You are then more likely to avoid causing injury to cyclists or motorcyclists passing you on the road, or to people on the pavement”

That advice relates to the ‘Dutch Reach’ technique. However, using that method isn’t a legal requirement and to make it so would require a new law, not a change to an advisory rule in the highway code. 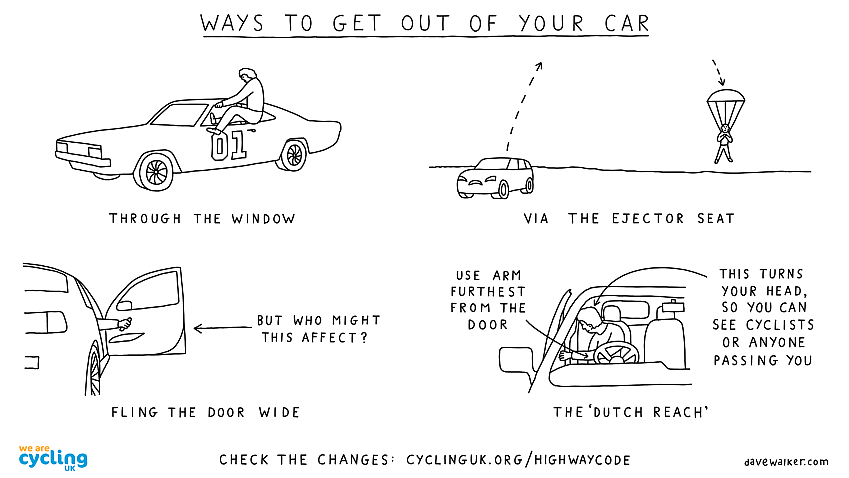 If I’m planning to drive somewhere there’s often a number of different routes and roads I could choose to travel on. I don’t have to use the motorway, just because it was built at great expense and somebody else insists that I therefore have to use it. I can decide which road or route is suitable, and possibly safer.

That’s always been the case for cyclists and cycle lanes. People have never had to use them rather than riding on the main carriageway just because they exist. The new rule 61 doesn’t change that, it endeavours to clarify that while cycling facilities are provided for reasons of safety, cyclists may exercise their judgement and are not obliged to use them.

But why wouldn’t you use a separated cycle lane rather than share the main carriageway with the lorries?

Well, the reality is that the overwhelming majority of cyclists will and do use separated cycle lanes where they are well designed and maintained. If it’s icy and the road’s been gritted, but the cycle lane hasn’t been, I probably won’t cycle in the cycle lane. If the cycle lane stops and starts every 20 or 30 metres and is little more than short sections of white paint, I’m also unlikely to use it. But I genuinely cannot recall the last time I saw someone cycle along the main carriageway of the Embankment towards Westminster, because alongside it there’s a truly fantastic separated cycle lane transporting more people in less space, which almost every person cycling there uses instead.

Everyone still needs to behave responsibly 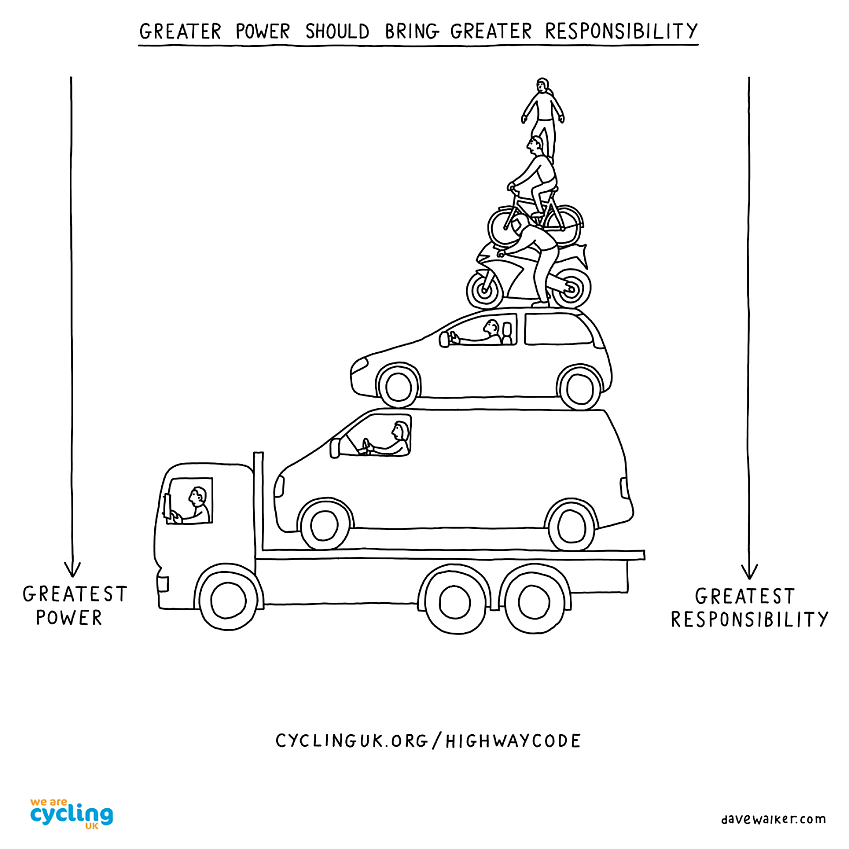 Alas, many commentators clearly haven’t read, or haven’t understood the rule, which clearly states that:

“The hierarchy does not remove the need for everyone to behave responsibly.”

“It is important that ALL road users are aware of the Highway Code, are considerate to other road users, and understand their responsibility for the safety of others.”

The hierarchy is really a matter of physics. A mistake or inattention by a lorry driver potentially has greater consequences for the safety of others on the road than say, the actions of a seven year old walking along the pavement.

Of course, if you’re not paying attention as a pedestrian that can have fatal consequences for you, which is why those drafting the new rule couldn’t have been clearer: it doesn’t remove anyone’s responsibility, it just establishes that those with the potential to cause the most harm to others have the greatest responsibility.

So, the new rule doesn’t encourage or embolden me to run into the road and force drivers to stop. Who’s likely to come out worse from that exercise? It merely links responsibility to the risk people pose to others, but of course, not everyone in the media seems to want a reasonable and balanced headline!

We massively support these changes, but we couldn’t have been clearer about the need for a government led public awareness campaign before they were introduced. Whilst we’re waiting for that to start, you can help us rebut the misinformation about these changes. We’ve put together a helpful guide with a range of shareable assets and free resources you can share on social media and elsewhere.

So, please take a look, help us bust the myths and encourage people to #checkthechanges.