Cycling UK works in partnership with centres across the country to give access to cycling to people of all-abilities. Dave Glover has started work at the new Edinburgh ABC (All-ability Bike Centre) and he explains how the centre is already helping many people to enjoy cycling.

As the Edinburgh ABC Development Officer, it has been amazing to meet the first riders who are already being helped by the project. Edinburgh ABC base at the City of Edinburgh Council's Bangholm Outdoor Centre on the north side of the city is open and here are just a few people I have had the pleasure of cycling with this week.

A young lady with an Autism Spectrum Condition came along with her support worker. She often cycles with her family at home, very quickly demonstrated her skill on a solo bike and was pedalling well with clear enjoyment around the Edinburgh ABC essential skills area. It was great to help her explore the traffic-free cycle network that is directly accessible from the Edinburgh ABC base.

Brian and his wife Anne came to ride the adaptive bikes as they wanted to share the joys of cycling together. Anne is a confident solo bike rider, whereas Brian felt he required the reassurance of a three wheeled bike in order to feel comfortable pedalling at this stage. After having a bit of a hoot together on the twin bike (essentially 2 solo bikes linked together) Brian found his comfort niche on board the semi-recumbent and hopes to regularly use this bike alongside Anne on her solo as they explore the cycle ways around Bangholm and find the best places to stop for coffee and cake!

We have also had an open 'Meet the bikes' afternoon for children with additional support needs and their families. There were several families there including Ruari and his mum who enjoyed the chance for a quick spin around the skills area on the twin bike. I also met Calum who proved to be a very determined young man, wanting to try out all the bikes by himself. He showed great skill using the hand-cranked trike 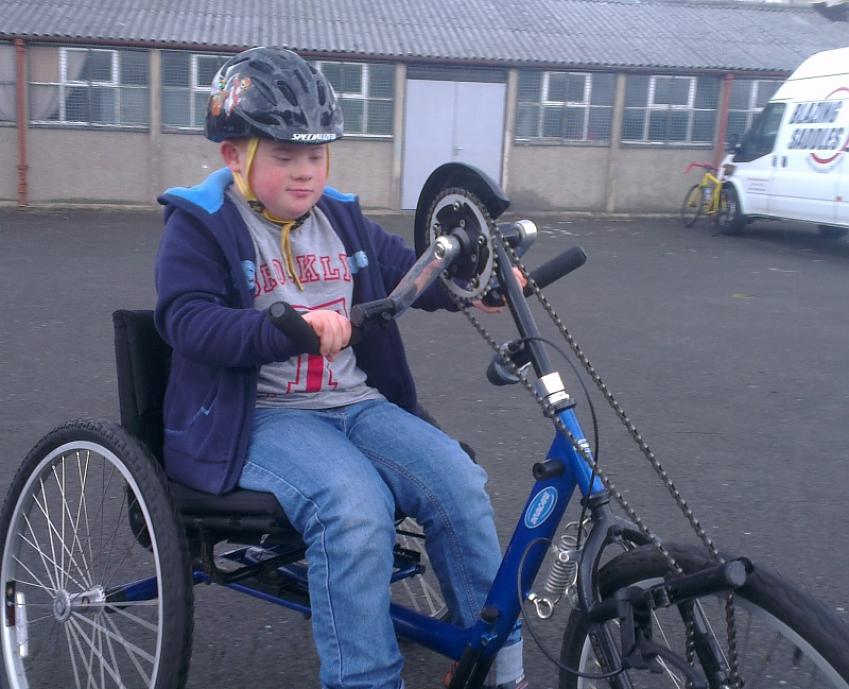 About the Edinburgh ABC

CTC and FABB Scotland, a national youth organisation working mainly with young people with disabilities, have received funding from Scottish Government to introduce cycling to hundreds of people, whatever their age or ability using Edinburgh’s traffic free cycle network. The project, called Edinburgh ABC (All-ability Bike Centre), will give many people their first taste of independent mobility.The funding enables CTC to employ a part-time development officer to deliver an inclusive programme of cycling activities and builds on the success of FABB’s Blazing Saddles’ cycling project for people with disabilities thus changing lives in varied and positive ways. This will be done by purchasing a range of adaptive bikes and with support, guidance and advice from FABB Scotland/Blazing Saddles and City of Edinburgh Council.

Edinburgh ABC, based at City of Edinburgh Council’s Bangholm Outdoor Centre, will reach out to organisations and communities that may like to take part in the project, enabling a wide range of people to participate in cycling activities, specifically but not exclusively:

For more information about the project, including how to participate or become a volunteer please contact