When Cycling UK decided to make a virtual reality film to give to police forces as part of its Too Close for Comfort campaign, we decided it should be as 'real' as possible and reflect current National Standard cycle training guidance on road positioning and looking. But what exactly is that? We asked Cycling UK member and professional cycle instructor Sarah Wood to assist us on the day of the filming. Sarah explains why it was important she was there to advise.

Why Sarah wanted to be involved

I am a National Standard cycle instructor and my bread-and-butter work is delivering Bikeability in schools. I also lead rides and teach children and adults how to ride a bike.

I feel that getting around on a bike is the answer to nearly everything but people are put off riding because of fear of traffic and I can see why this is. So any involvement in addressing this issue such as cycle campaigning, training and making a film is important to me. I have been filmed by Surrey TV prior to this filming, where I demonstrated road positioning.

This time a stunt rider who looked the part would be in the film and not me, so my job was to make sure she was cycling in line with current guidance and best practice."

Setting up the 'stunt'

I arrived at the location on an actual road with an open mind. The stunt rider was yet to come but the scenario was in place. The rider had to pass a line of parked cars whilst being passed too closely by a stunt driver. On the other side of the road, there was a parked van which created a pinch point.

There was insufficient space for a driver to overtake safely and accommodate  the rider at a suitable distance away from the door zone of the parked cars. I rode the journey a couple of times to consider when the rider should move out, the distance away from the parked cars and the issue of oncoming traffic. I knew the rider should be error-free in terms of position and looking behind before moving out. If there was rider error, the video would not be well received. 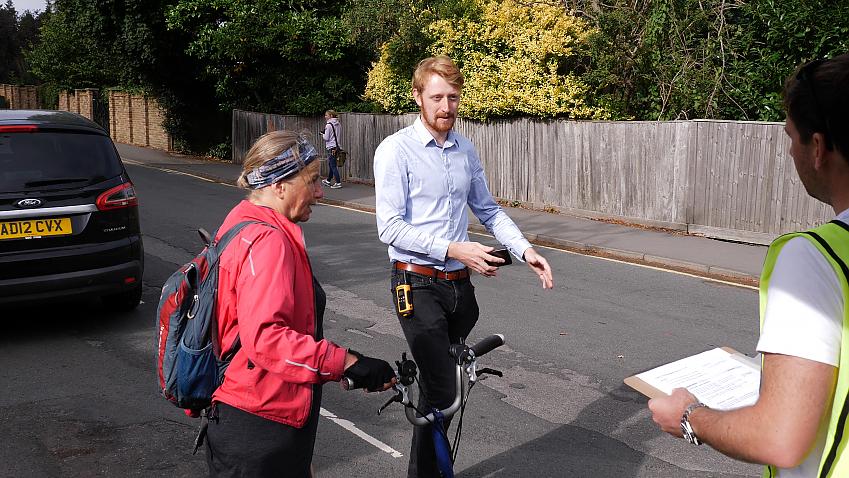 Primary and secondary positions are technical terms that are used in training. There is another term that some of my instructor colleagues and I use. This is 'see and be seen line'. When moving towards the row of parked cars, the rider needed to be at least in this line before moving out away from the door zone of the park vehicles. The line is an imaginary line close to the position of the outside wheel of a parked vehicle.

I wanted the stunt rider to be in this position before making the decision to move out. This required me to share the idea of the “see and be seen line” with all the other members of the team: The film director, stunt driver, stunt rider and others. I think they must have taken on the concept as they seemed to be listening intently!

There were several runs to get the close pass. The road had to be free of oncoming traffic before the stunt cyclist started their journey then the stunt driver accelerated and did a close overtake at the point where she had started to or had moved out to pass the parked vehicles. The stunt rider wobbled accordingly.

However, the problem was that although close, this pass was not close enough. I had seen far 'worse' close passes on YouTube videos put up by real-life cyclists. With practice, though, the close passes by the stunt driver became closer. The other issue was that when the rider was in the correct position and looked behind before moving out, the close pass was less likely to happen - but we didn't want to show the cyclist too close the kerb and not looking behind before making the decision to move out.

The close passes continued with the camera in various positions and, with practice, the passes became closer and closer until there was enough footage available to edit into the film. Like all filming, it's a very frustrating and time-consuming process! But it was also very sociable: we had snacks and drinks while hiding in vehicles as the filming took place and spoke kindly to drivers who parked in inconvenient places and laughed when unwanted 'extras' looked like they were about to stand by the bus stop!

How to 'see and be seen'

As for close passes, my bike is my vehicle and I encounter close passes probably every day. Not only when riding through a pinch point but also when in secondary position riding along a straight road. Some drivers do not want to slow down or wait until it is safe to overtake. Others do not want to go into the 'other' lane even if free of oncoming traffic. Some appear to be oblivious to the fact that their close pass driving creates risk. Others close pass to be aggressive. This initiative has to be very helpful to educate drivers if they are unaware of the effect on cyclists of their behaviour. As for dealing with driver aggression, I am less certain. Perhaps my next piece of filming needs to be with the police as they are implementing the initiative?

My message to other cyclists is to be in the right position and use that 'see and be seen line'.

My message to other cyclists is to be in the right position and use that 'see and be seen line'. Move out into the oncoming lane quite early when there is not oncoming traffic but be aware of traffic behind you, look behind before moving out, changing your speed according to the situation.

Cycling UK's Sam Jones said: "Thanks to Sarah for volunteering to help with our film. Sarah's assistance and expert knowledge were invaluable and mean Cycling UK working together with police forces can rightly use and promote this film, raising awareness of the issue of close passing and ensuring that far fewer cyclists are passed dangerously in future. Not only that, it may also help raise awareness of the importance of road positioning and looking for cyclists and help educate motorists as to why cyclists ride where they do."

Why do we need a Close Pass Virtual Reality film?

"The film, which is our first ever in 360° cost £15,000 and was funded in just eight days with a Kickstarter campaign. It is to be supplied to all the police forces operating around the UK to show to drivers stopped for passing cyclists too closely. With only two per cent of all journeys being made by bike, the vast majority of drivers will never cycle and they therefore will have no direct experience of the unpleasantness of a close pass.

Thanks to this film, which has already been put into operational use by West Midlands Police’s Road Harm Reduction Team, police forces can now begin to start spreading the message to as many drivers as possible on how to overtake cyclists safely. The film is in addition to our popular Close Pass mats, which were quite literally (!) rolled out across the country last year by forces to show motorists the approximate distance they should be giving cyclists when overtaking them.

Given the importance of the film in terms of our campaigning and cost, it was absolutely critical everything was right, as the last thing we wanted was for the film to fail due to poor road positioning or some other element which a trained instructor might pick up on. Our trained cycle instructors were unavailable for the filming dates, but kindly Sarah stepped in to save the day."