Ennerdale and Ennerdale Water - both on the proposed Coast to Coast National Trail. Photo by alh1 (CC)

Taking the government to task on making cycling more accessible for more people is part of a day's work for Cycling UK, but potentially taking them to court is a big step. It's not something we as a charity take lightly, and we only consider it exceptional circumstances, as Cycling UK's off-road policy advisor, Kieran Foster explains

This week, Cycling UK together with the British Horse Society sent a letter before action to the Secretary of State for Environment, Food and Rural Affairs (Defra), the Rt Hon Ranil Jawawardena MP calling on the government to reconsider proposals that would effectively prevent people cycling or horse-riding along the length of England’s next National Trail, the Wainwright Coast to Coast.

This is not an off the cuff action, and has a bit of a back story.

In 2019, Cycling UK wrote to Tony Juniper, the newly appointed Chair of Natural England (the non-governmental body with responsibility for promoting access to the countryside) to discuss the importance of National Trail’s for off-road cycling and mountain biking.

Although only about 2% of all countryside visits were for this purpose, according to the National Trails User survey (2014) they constitute about 8% of national trail visitors. It's important to note that this is within the context of only two of the nation's sixteen national trails being fully open for cycling and horseriding, the South Downs Way and the Pennine Bridleway. On those trails, and indeed on stretches of the other trails that are open for cycling, data provided to Cycling UK by the National Trails seems to suggest that more like 20-30% of all users are on bikes.

The Hobhouse report (Report of the National Parks Commitee) outlined the Government's vision for the National Trails at their inception in 1947:

“We also attach importance to the provision of long distance paths and bridleways in and between National Parks and Conservation Areas. There should be continuous routes which will enable walkers and riders to travel the length and breadth of the Parks, moving as little as possible on the motor roads."

The legislation creating National Trails (formally known as long-distance routes) was written in 1949, and was later amended to include bikes in 1968 following lobbying by the CTC (as Cycling UK was formerly known as). It states categorically that long-distance routes are for use “on foot, on horseback, or on a bicycle”. Consequently, Cycling UK believes that the starting point should be that National Trails should be designed to be accessible by people cycling.

Now, that doesn’t mean that we think that all routes should be usable by anyone on any type of bike, as we would expect with then National Cycle Network. Some of these trails go into remote mountainous areas after all but as was said in parliamentary debates at the time:

"The Countryside Commission is currently bringing forward proposals under the National Parks and Access to the Countryside Act, 1949, for the establishment of long-distance routes for my right hon. Friend's approval. These routes are intended for extensive journeys on foot, on horseback or on bicycle; but parts of them will by their physical nature be unsuitable for bicycling." HC Deb 17 July 1969 vol 787 cc184-5W

This is about ensuring that the design and legal process of developing a National Trail properly encompasses cycle and horse users wherever possible. Including, for example, braiding the trail so that different route options for different users might be overlaid with each other In order to ensure that a continuous route along the corridor exists. Doing this offers huge advantages for rural businesses like pubs, cafés and bed and breakfast, because it results in a wider and more diverse customer base, with a longer tourist season. Importantly, it’s how successful routes in other places like the Camino de Santiago (the most popular similar multi-day route in Europe) operate. 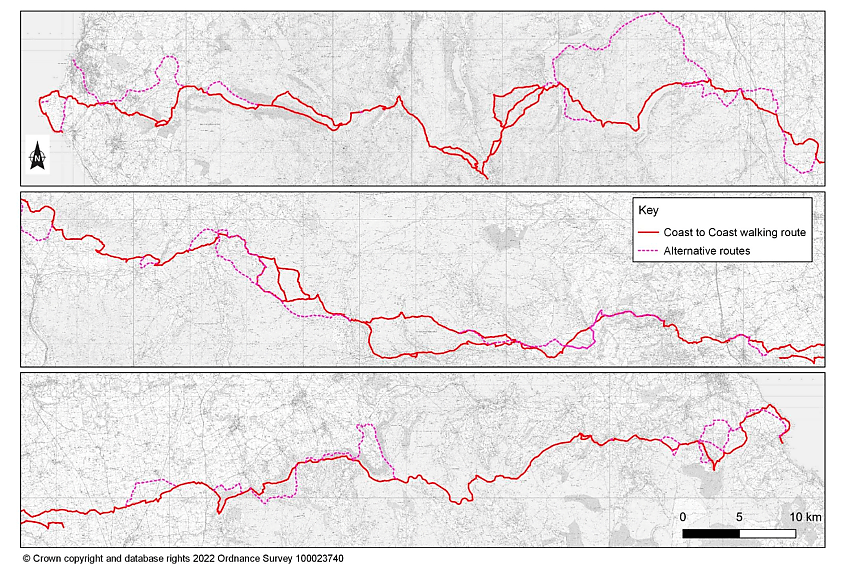 Possible alternatives to the Wainwright Coast to Coast path.

When the government announced in their 2019 election manifesto their intention to make the Coast to Coast (Alfred Wainwright's famous walking route) into a National Trail, Cycling UK welcomed the news. OK, we’ll be honest, there was a level of frustration that the government were setting off to do this when the Pennine Bridleway still had a five mile gap in the route outside Glossop, and the northern extension of the route, authorised by the Secretary of State over 20 years ago, still hasn’t been started but we reached out to some of the organisations involved and asked to be part of the consultation.

The British Horse Society did the same. However, despite initial positive soundings, nothing seemed to ever get tied down into a real sit down discussion to iron out what was happening. Given that this was during the period of the pandemic it is understandable the focus was elsewhere.

It was therefore with some surprise that last month we heard, via press release, that the Secretary of State for the Environment had not only been presented with a finalised report from Natural England on the proposals for a coast to coast path, but had in fact already signed off on this report… and that cycling was not included.

In fact it’s worse than this. Careful reading of the report showed Natural England chose to consult on their proposed route with user organisations including the Ramblers, British Mountaineering Council, Open Spaces Society and Disabled Ramblers but had conspicuously chosen not to engage and consult with representatives of the cycling and horse-riding community. Despite Cycling UK and the BHS both being ‘prescribed organisations’ named in regulations regarding rights of way consultation.

That’s unreasonable. Since this announcement, Cycling UK has worked with our friends at the British Horse Society to seek legal opinions, and we are left with a variety of questions about how this decision came about.

Our members and the outdoor users our two organisations represent are two of the three user groups names in the legislation. They are two of the groups that National Trails are supposed to have been designed for, and thus not consulting with those groups, not even taking proper feedback on what possibilities there were to make the route suitable for all users, or on how proposed rights of way changes could have been made better for everyone, was conspicuously unfair.

It does not amount to proper consultation, and it suggests that the decision making process was biased against our interests from the outset.

So, there we are. That’s why we have made a stand. It’s important to realise that this is the first stage in a process, and that we have offered to sit down around the table with Natural England and Defra to try and resolve this, and avoid it going to court.

We think that it’s not right that the Government and national bodies continue to fail to consider properly the interests of cyclists and horse riders at a time when the benefits of access to the countryside for everyone have become increasingly well understood.

"There is a lack of consistency between National Parks with some considered to be promoting shared and fair access, others less so. And there seems little logic across the country to the nature of rights of way at the moment. Cumbria and Shropshire are rich in bridlepaths. In some other places, almost all routes are only open to walkers not horse riders or cyclists. As even rural roads become busier and more dangerous, it is all the more important that fair access is given to all.”

If Cycling UK are successful, we will be able to ensure all future National Trails will have to consider being accessible to cycling

Finally, its important to note that Cycling UK's challenge is only possible thanks to the Cyclists Defence Fund and the donations we receive from the cycling community. The CDF is there to help raise the funds for Cycling UK to fight significant legal cases involving cycling where they could set important precedents for the future.

The upshot of this current struggle is if Cycling UK are successful, we will be to ensure all future National Trails will have to consider being accessible to cycling. At the same time we hope it will also encourage other existing National Trails to follow the examples of the North Downs Way and Ridgeway which are both working with Cycling UK to make riders' routes and be more accessible to more people.

If you would like to support Cycling UK's battle to increase access for people cycling please consider donating today.

The Cyclists’ Defence Fund helps fight significant legal cases involving cyclists and cycling like our prospective legal challenge on the Wainwright Coast to Coast path. It is here to challenge those cases which could set important precedents for the future and could affect the safety of all cyclists. Over time, its remit has expended to cover all aspects of cycling and the law. It is funded through donations.

Dartmoor camping legal challenge: how could it affect cycling? View