Cycling in London - 30 years ago

The GLC's film shows how little has changed since the 1980s
By Chris Peck
Tuesday, 18 February 2014

Cycling in London - 30 years ago

A film produced by the Greater London Council in 1984, shows how many of the core network of cycle facilities were built through funds from a short lived Cycling Unit.

Back in the 1980s, cycling in Britain was undergoing a bit of a renaissance.

Having fallen to a nadir of just 3.7 billion kms cycled in 1973, the subsequent oil crisis following the Yom Kippur War saw cycling bouncing back to over 6bn kms.

A second oil spike, this time triggered by the Iran-Iraq War, saw cycling rise again, to 6.4bn kms in the early 1980s. 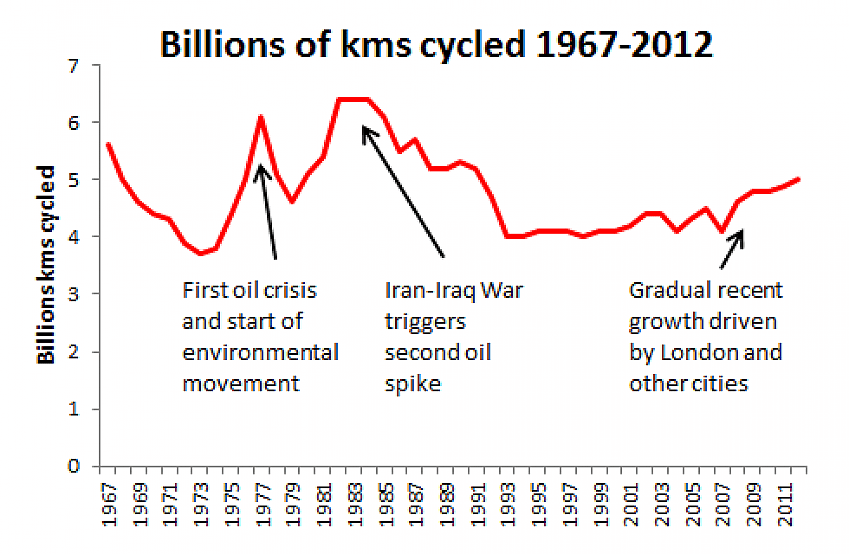 In the Netherlands or Denmark, these oil crises, coupled with environmentalism and social justice movements, triggered shifts in thinking and reconstruction of urban areas to accommodate cyclists.

Here in Britain, the steps were rather more cautious. However, in London, some improvements were made courtesy of the GLC Cycling Unit, which existed during Ken Livingstone's tenure at the Council in the early 1980s.

That unit's achievements were documented in a contemporary film and many of their schemes are still there, usually as part of the London Cycle Network which made use of minor roads to bypass the busiest main roads.

The film was, of course, made at a time when the GLC was under threat: the previous year Margaret Thatcher's government had proposed its abolishment, something accomplished within two years of the film being made.

In that respect, the film is pure propaganda: the staff from the Cycling Unit are trying to save their jobs (they lost them in the end) and the activists from LCC and CTC were wheeled out to sing the GLC's praises (or were edited to), even if they truly believed it.

There are some who suggest that the boom in London at the time was comparable to today and that the very fact that so little was achieved after the film was created means we should be more sceptical about grand announcements today. This is in some ways true, but the context is all important: the dismantling of the GLC really did undermine forward momentum behind cycling in the 1980s, setting cycle planning back another 15 years. 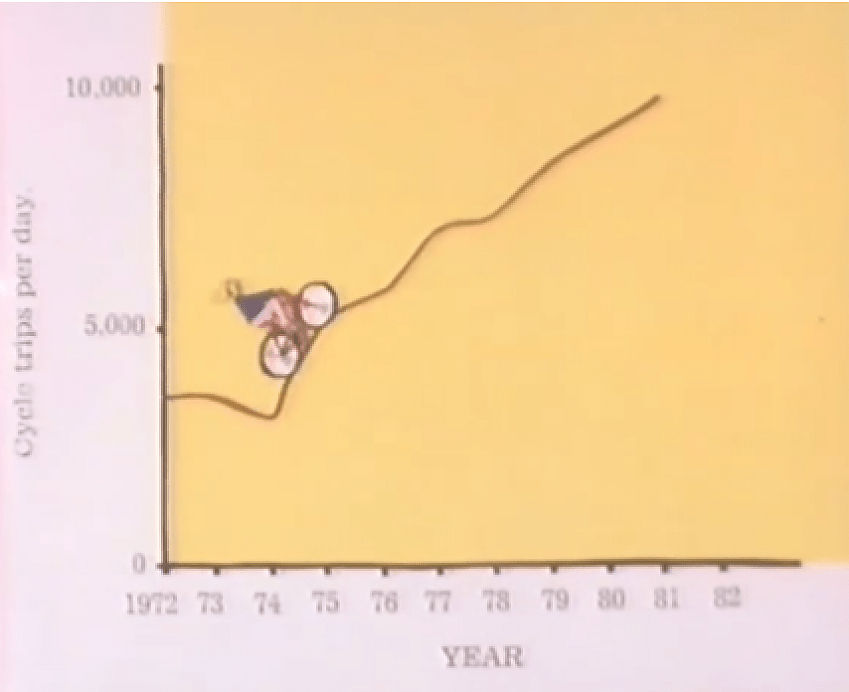 The film suggests three things that were happening at the time, they were:

- that the number of people cycling into central London was up 300% in recent years;

- that as a proportion of travel by road cycling represented 5% of the journeys to work;

- that the Unit was spending £2m per annum on cycling, 1% of the budget.

The increase in those entering central London is impressive, but it only reached 10,000 by the early 1980s: today that same figure is 33,000, up from 12,000 in 2000 (TSGB0106). As for those crossing the central London cordon; those figures show a slight increase in the 1970s, but the blip is tiny in comparison with the recent growth (see right). 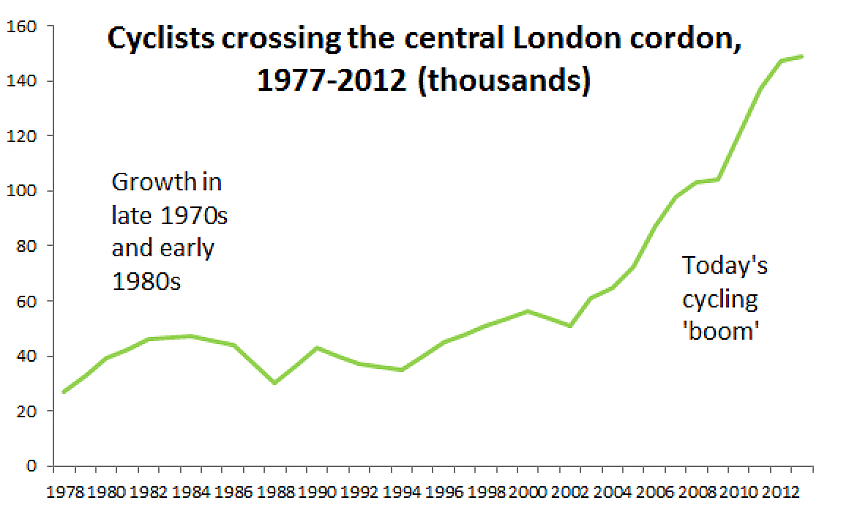 5% of commuters travelling by road is a tight definition: many London commuters travel by rail or underground. A similar figure using the 2011 Census would give an equivalent figure for London of either 7 or 8%, depending on whether or not 'walking' is included as a road based mode.

The Unit's budget of £2m was very small - which explains why the schemes were small scale projects like contraflow lanes, cut throughs and signed routes on backstreets and through parks.

The approximate equivalent budget today would be around £5.5m - pretty small beer when compared to London's cycling budgets today.

What stands out to me about the film is how little the major junctions featured in the film have changed for cycling, but how much the demographics have changed. The film shows children, and a wider range of people, most in ordinary clothes, with not a helmet in sight.

People are shown riding a mixture of practical city bikes but many are also on that horrible 1980s standard, the overgeared 10-speed racing bike. These are utterly impractical (no mudguards or luggage carrying capacity) but are lightweight, and therefore handy for those living in flats with no proper bike storage. They are similar to many of the single-speeds and carbon-fibre racing bikes used by today's commuters.

What struck me the most was how thin everyone is and not just the cyclists: passersby, drivers, policemen all appear slender. The figures back this up: in 1980 36% of people were overweight; today it's 63%. And it is in this extraordinary increase in weight gain amongst the population that the benefits from increasing cycling levels (particularly amongst older people) now lie.