Introducing new Highway Code rules is an excellent start, but not an end in itself, as people won’t telepathically know what’s changed. Cycling UK's head of campaigns Duncan Dollimore explains why communication is equally important, what needs to be done, and how you can help

Fourteen years after the last major changes to the Highway Code, new rules applying throughout GB but not in Northern Ireland, finally come into effect on 29 January. This is the result of over a decade of campaigning by Cycling UK, backed by our incredible members and supporters.

I’m not going to go through all the new rules in this article, because we persistently lobbied for them, set out the ten key changes we were seeking, and summarised them both on our dedicated web page and in this article.

We've also covered the main changes in this new film, which we’d urge you to share as widely as possible, for reasons which should become clear as you read this article.

While the final text of the new rules wasn’t published until 1 December last year, we’ve known this campaign win was coming for several months, and have been saying for even longer that a widespread public awareness campaign was desperately needed before the rules were changed.

Two out of three don’t know

It wasn’t until Wednesday, however, three days before implementation day, that the government started to promote the changes. This is weeks after multiple newspapers reported that two out of three drivers were unaware these were coming, with Cycling UK’s calls for a long-term and well-funded communications campaign to raise awareness of the new code widely referenced and supported by almost every road safety related organisation.

The Department for Transport’s (DfT) explanation for not promoting the changes until after they come into effect has been that they didn’t want to do so until they’d been approved by Parliament. That’s just bizarre, because the process leading to introduction of these rules doesn’t require the active consent of parliament at all.

Telling me the rules after I’ve breached them

As explained in this article, once the proposed new rules were laid before Parliament in early December, the Secretary of State couldn’t finalise them until 40 parliamentary days had passed. The DfT has been saying for weeks that this meant implementation on 29 January.

It would have needed a motion from a private member, and the majority of the House of Commons, actively to vote against the statutory instrument (SI) to stop the changes coming into effect. The last time the House of Commons did this and voted against an SI in this form was 1979, and since then tens of thousands of SIs have passed.

So, while it is legally correct to say that for the last two months it wasn’t 100% certain that these changes would be implemented, the odds against this were such that it was obvious that the public awareness campaign needed to commence in anticipation of the proposed changes, and before they were implemented.

We’ve had many public awareness campaigns in recent years, for example on pending changes before leaving the EU...before the final legal text was signed, sealed and delivered

After all, we’ve had many public awareness campaigns in recent years, for example on pending changes before leaving the EU and on forthcoming or proposed coronavirus restrictions, before the final legal text was signed, sealed and delivered.

A vacuum of alternative facts

But as we know, nature loves a vacuum, and without clear, accurate and memorable messaging about the new rules, we’ve seen inaccurate, misleading reports, and opinion pieces from some sections of the media, designed to sow conflict between different road users rather than explain the rationale for the changes and what they are.

So, despite what the Express and others have claimed, cyclists haven’t been told to ride in the middle of the road. The amended Rule 72 merely explains to drivers the advice that’s been given to cyclists through the government-supported Bikeability standard for over 16 years, namely that in some circumstances it’s advisable to ride in a more central lane position, not the centre of the road! 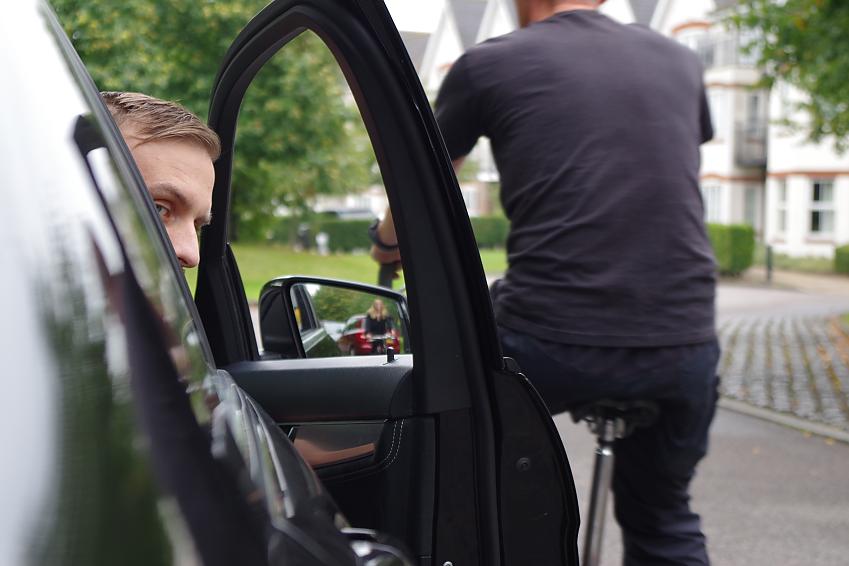 Similarly, claims that opening your car door with the wrong hand will lead to a £1,000 fine are just clickbait.

It’s already an offence to injure or endanger someone when you open your car door. New Rule 239 just explains this better, pointing out the need to look around and use your mirrors, and then referencing the Dutch Reach as a recommended technique to ensure you do this by habit – but it doesn’t make it a legal requirement or create a new offence.

To maximise the benefits of some fantastic changes, the rules need to be widely communicated, understood, and ultimately backed up with visible and effective police enforcement

I could carry on going through the misinformation about the changes, but I’d then miss the chance to write a detailed myth-buster piece next week.

So for now, if you know someone who seems confused about the changes, please just share our film with them (see above), which in three minutes summarises four changes namely: 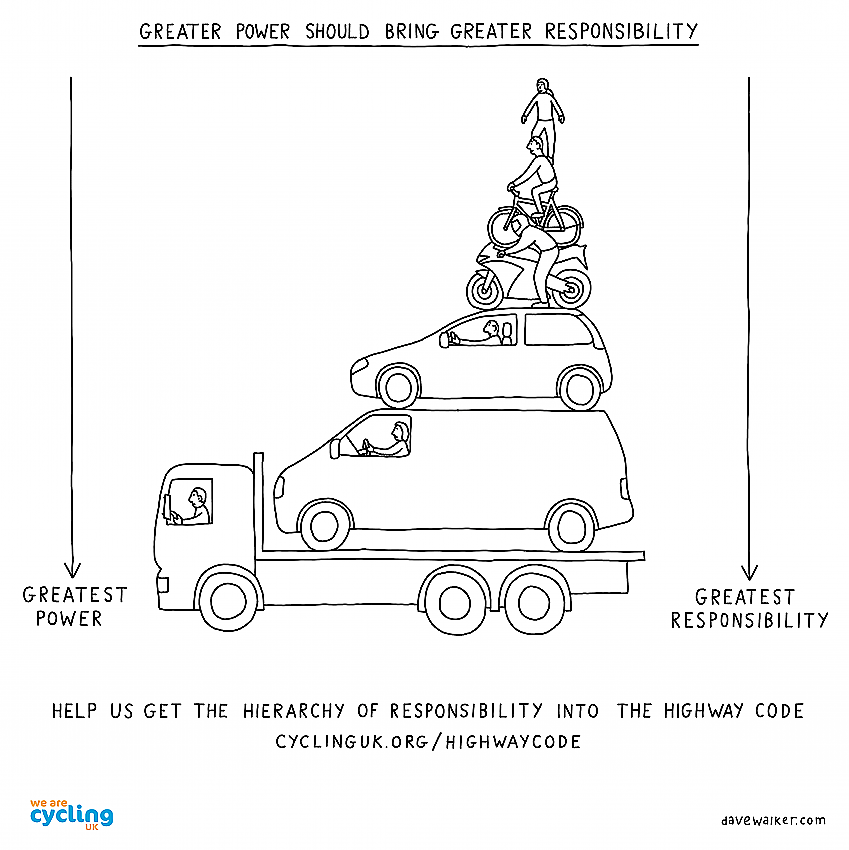 But, sadly, hate seems to sell, with commentators like Richard Littlejohn branding the proponents and supporters of the Highway Code changes as "a cabal of blinkered, neo-communist fanatics".

Of course, I’d hope that most people will sift through the inaccurate reporting and hate-filled bile. But too many radio station debates have led to the tired-old-drivers-versus-cyclists narrative, and that tells us that while changing the rules is an excellent start, it’s not an end in itself.

To maximise the benefits of some fantastic changes, the rules need to be widely communicated, understood, and ultimately backed up with visible and effective police enforcement.

In the meantime, though, we’re trying to promote our messaging and information about the changes as widely as possible. So, as and when you see our assets, including infographics, video and social media content, please do share them, including with those you know who don’t cycle, because that’s the audience who need to be informed – the one the DfT really needs to reach!

A huge thank you

I started this article with a note of celebration. Securing much needed changes to the Highway Code has been a long-term project at Cycling UK, but the victory isn’t ours – it’s yours.

Nearly 17,000 members and supporters backed our consultation response to the DfT in support of these changes back in 2020, but many of you had been supporting campaigns and actions to get to that point for many years.

Here’s just a few from the last six years:

So, despite my despair about the absence of a visible public awareness campaign thus far, and my cautionary note that introducing new rules are an excellent start, but not an end in itself, Saturday is a day to celebrate success – and your support for our campaigning.

All of our campaigns work is funded through membership, so if you’re a member, please take a bow. We couldn’t have achieved this without you.

If you’re a supporter who isn’t a member, or just value the work we do to get more people cycling, you’re always welcome to join us.

By joining Cycling UK today, your membership will directly help fund our campaigning work, in addition to the third-party liability insurance, free legal support and a whole host of other great benefits.

An whether you’re a member or not – remember – please share our film and other materials as you see them, to make sure these vital Highway Code changes are communicated far and wide.

Cycling UK has campaigned for over a decade to see these new changes to the Highway Code introduced and adopted. Please support our ongoing work as a charity to make the UK a better place for cycling and join today.

How to: Communicate the Highway Code changes View