Why do cyclists need priority at junctions - and how should it be done?

Why do cyclists need priority at junctions - and how should it be done?

Cycling UK believes the Government should introduce new design measures and rules to give cyclists and pedestrians greater safety and priority at both unsignalised and signalised junctions. This article explains why and how.

Since this article first appeared, Cycling UK has been closely involved with the Department for Transport's (DfT) pre-consultation on a review of the Highway Code.

The DfT has now announced an official consultation and we're pleased to say that many of the new rules we've suggested are among the proposals. One of them is to introduce a 'Hierarchy of Users' or ‘Hierarchy of Responsibility’, recognising that road users who pose greater risks to others ought to have a higher level of responsibility; and another is to simplify the rules relating to non-signalised junctions, which will make junctions safer and address ‘left-hook’ collisions.

But, to make these proposals a reality, it's vital that road users of all kinds write to the DfT to show their support. Otherwise, they could be dropped. Please help us make it happen! (Deadline 27 October 2020).

Please read on for our original article.

Cycling UK wants the Government to:

Junction priority and the 'hierarchy of users'

Guidance endorsed by the Government (e.g. Manual for Streets 1 & 2 and other documents) nominally respects a ‘hierarchy of users’, which gives priority to people with disabilities, cyclists and pedestrians.

In reality, however, the design (both geometric and aesthetic) of most roads reverses this hierarchy, with most footways (and nearly all cycleways) designed with the clear expectation that their users yield to motor traffic.

This is exacerbated by the expectation, created by the Highway Code and accompanying legislation, that all modes have an equal responsibility to ‘look out’ for each other in all circumstances. Yet such an equivalence cannot rationally exist given that pedestrians and cyclists are both far more vulnerable, and their ability to cause harm to others is negligible, when compared to people inside vehicles.

This means that, though the hierarchy is repeatedly exhorted in design documents, there is little backing for it in legal frameworks. This has proven particularly problematic to designers seeking to introduce ‘shared space’ (or, to use newer, less controversial / confusing terminology, ‘informal’ or ‘enhanced’ streets). Also, designers find that blind and visually impaired people are often concerned that the system of ‘negotiated priority’ (i.e. rather than ‘legal’ priority) makes navigating some layouts and junctions both confusing and challenging.

To address this, Cycling UK believes that:

This sets out various problems with current practice, deficiencies in the law and ways in which Highway Code rules can be improved to ensure stronger protection for parallel cycle facilities and footways (see below). It outlines recommended improvements for two junction types:

A few design options exist for giving cyclists priority over side-roads, but none is ideal. For example, if there is enough space, a cycle track can be ‘bent out’ so that the point where it crosses a side road is slightly set back from the main road - but this is not usually possible on urban roads, due to the presence of buildings.

Alternatively, a new design for zebra crossings which permits cycling parallel to pedestrians can be used - but this requires substantial roadside furniture and road markings, and is seldom used close to the mouths of side-roads.

Nevertheless, many authorities (e.g. Transport for London, Brighton and Nottingham City) are coming up with design solutions - but there is no consistency amongst them.

Also, legal protection for people on parallel cycle lanes or cycle paths over traffic turning across their path into side-roads remains ambiguous in the UK - this not the case in most other European countries.

In the light of the above, Cycling UK calls for a clear rule-change in the traffic signing regulations to permit ‘Give Way’ lines to be used on two-way streets without requiring centre-line markings on the approach to the junction. This would allow them to be used in the same way that the ‘sharks teeth’ marking works in the Netherlands.

This change should be reflected in the Highway Code (see below), as recommended in the ‘Turning the Corner’ report, and communicated to the public through a concerted advertising campaign to reinforce the importance of giving way to pedestrians and cyclists, along with the safety reasons behind the changes.

Currently, introducing fully segregated routes for cyclists necessitates an additional phase in the signal cycle to segregate left-turning motor traffic from cyclists going straight ahead - the ‘hold left on red’ approach adopted on many of the new cycleways in London. The desire to maintain existing junction capacity often means that this separate phase - and therefore the whole scheme - is compromised.

This situation could be alleviated if designers were permitted to allow - in certain circumstances - left (and right) turning traffic to give way to cyclists or pedestrians travelling straight ahead.

Commonly used in other countries (e.g. Denmark and Germany), this approach would be a radical change in British road practice, but we believe that, if carefully signalled and designed for low speeds, it could work safely and allow dedicated space to be provided at junctions to enable continuous cycle routes.

Working with local authorities willing to trial this principle, we believe the DfT should identify suitable sites for trials to develop the kind of signing that would be reasonably well understood from the outset. Again, the Turning the Corner report makes recommendations on how this might best be achieved. 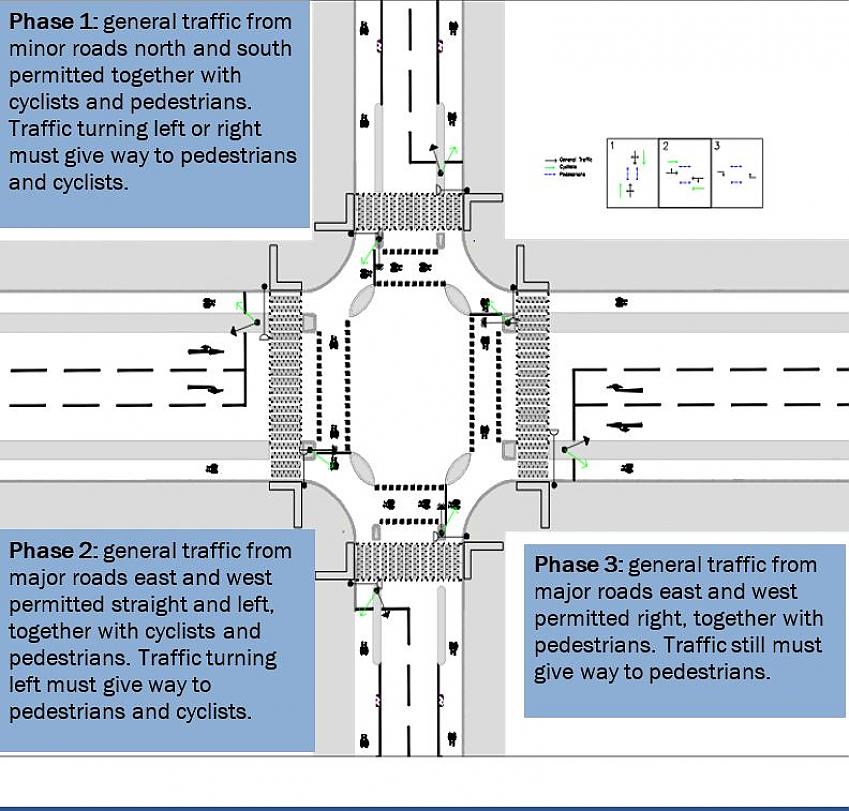 We understand that DfT has challenged Turning the Corner’s demands in a series of internal documents and emails released under the FOI Act (DfT FOI reference F0015002). We would like to refute some of the objections, as follows:

As discussed, most continental countries oblige traffic to give way to cyclists and pedestrians going straight ahead at a junction, even where turning traffic has a green traffic light.

To allow for this, though, Highway Code (HC) rules on priority at junctions need to be revised. Then, if the pilots prove successful, and once road users are more familiar with the concept, the principle of priority could be enshrined in law.

The rule change is vital because the HC provides the foundation for road user behaviour, and highway designers look to it to help them design roads and junctions. There is, however, no clear rule on giving way, which one of the reasons why cycle lanes disappear at junctions where cyclists need the most protection: essentially, engineers protect themselves by not providing anything.

The current HC rules also mean that most cycle paths along by the main carriageway keep coming to a ‘give way’ stop at every side-road. This frequently makes them so much less convenient to use than the main road itself that many cyclists end up riding along the road next to ‘cycling infrastructure’, but not on it.

It is true that highway designers who want to provide priority to pedestrians and cyclists crossing side-roads already have various options open to them (see above). Depending on the exact circumstances, they can install various give-way signs, crossings and other physical features such as speed tables etc. Yet they are reluctant to deploy these features for the simple reason that drivers may not ‘give way’ as intended. This is despite 14 separate existing HC rules that are meant to deter drivers from overtaking, cutting in and running into pedestrians and cyclists crossing side-road junctions.

Introducing a universal priority rule to the UK, though, would help improve local highway authorities’ confidence in installing continental-style cycle lanes and cycle paths that go across the mouths of side-roads. Such a rule would, in effect, consolidate and clarify existing rules, and make cycle lanes and paths simpler, safer and more efficient for everyone, as is the case elsewhere in Europe.

This simple change to the Highway Code, then, would be a major step towards embedding a custom that not only has the potential to make a huge difference to cycle safety in the UK, but also help deliver better cycling infrastructure.

Why should the Highway Code's advice on cycle helmets and hi-viz be revised? View

Making it safe to cycle: why wouldn't you? View

How could the law protect cyclists better from car-dooring or drivers who fail to stop? View

What’s the best way to make sure injured cyclists are compensated fairly and quickly? View