The Duke of Devonshire avoids tax by promising HMRC he’ll allow the public access to his Bolton Abbey estate. But if only allows the public access they’re legally entitled to already, what’s the point of the tax exemption, and what do the public get in return?

Two weeks ago, Cycling UK published a story about cyclists being denied access to the Bolton Abbey estate in the Yorkshire Dales.

Inevitably, the media coverage focussed on cyclists being banned from using a bridge on the Duke of Devonshire’s country estate, and the estate claims that security guards weren’t being employed to stop cyclists from accessing the Cavendish Pavilion café, forgetting that this was exactly what BBC Look North filmed them doing.

Normally, I try and avoid repeatedly using the term ‘cyclists’ when writing articles. It always feels like you’re ‘othering’ people and suggesting they’re somehow different, rather than people who sometimes cycle. I’m sticking with cyclists today however, because that’s the term used by the estate. It’s not a no cycling sign, or a cyclists dismount sign, it’s a no cyclists sign, with people on foot trying to push their bikes refused access.

Bigger story than the bridge

Cyclists had been crossing the Wooden Bridge to access the café for decades, and it was the estate’s decision to impose a bike ban in March that incensed many, bringing issues around access to the estate to our attention.

But that’s all I’m going to say in this blog about the café or the bridge, because there’s a far bigger story which hasn’t received enough attention, and that’s the denial of access to the rest of the 30,000-acre estate. 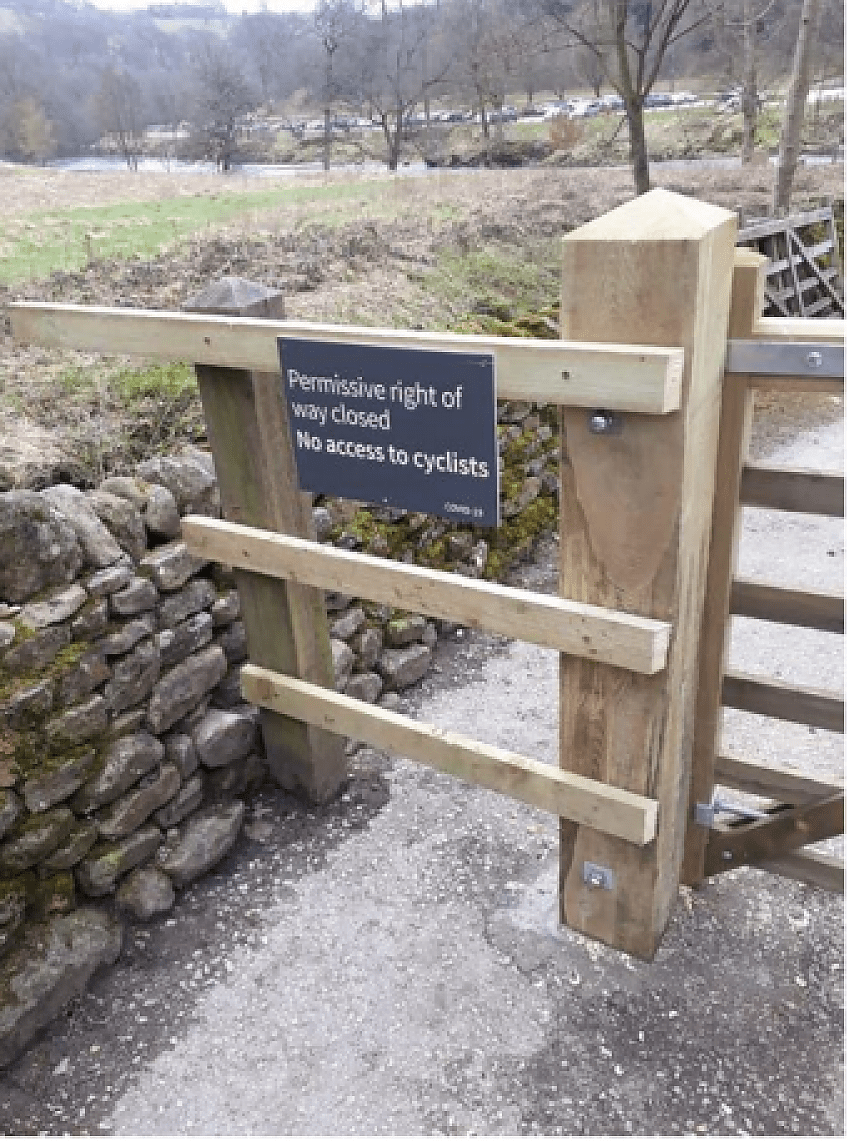 Across the UK, when the owners of country estates or stately homes allow the public access to their land, perhaps around the castle or to view the paintings, it’s not always an act of benevolence or public goodwill on their part. Sometimes, they promise the UK Government, via HMRC, that they will allow public access to national heritage assets. In return, they secure an exemption from capital gains tax and inheritance tax known as a conditional exemption.

There’s a register of these conditional exemptions, which in Yorkshire includes one for the Bolton Abbey estate.

I’m not going to play detective or try and do the maths, but a simple google search immediately reveals that the Duke’s net worth is around £880 million, with most of his wealth emanating from the ownership of large amounts of land, such as Chatsworth House in Derbyshire and the Bolton Abbey estate.

So, avoiding inheritance tax and capital gains tax on all of that must, you would think, significantly reduce tax liabilities. If that’s the case, you would also assume that the consideration given by the estate, in this case the undertaking to allow public access, should also be significant – and something additional to the public’s existing access rights across the estate.

A concession to do something I can do already

So, what extra public access to his estate does the Duke permit in return for the tax exemption?

Well, the undertaking on the central register doesn’t help us much because it simply states that the landowner has undertaken that: “Public access is available all year on the public roads and permissive footpaths and bridleways shown on the map.”

But doesn’t the estate comply with it’s undertaking by allowing additional access to walkers? Well, actually, the majority of the permissive paths identified on the map cross what’s known as open access land, which is land over which (in England and Wales) the public already have a right of access on foot. The permissive paths don’t therefore give the public any additional access, because the public already has a right to walk along those paths, and indeed the surrounding land, because it’s open access land.

There’s no right of access for cyclists or horse riders over access land (something which is being considered within the access reform process in Wales), so if the Duke allowed cyclists access to these paths, that would be additional access over and above that which the public were entitled to, but he isn’t, so he gets a tax exemption in circumstances where it’s hard to see what he gives up in return.

Miles of vehicle tracks – not footpaths around a visitor centre

The reference to ‘paths’ within the undertaking masks the reality of what the tracks across the estate look like on the ground. Over 100 miles of open moorland are crossed by vehicular access tracks eminently suitable for off-road cycling or horse riding, but of course, to date, people have not questioned why they weren’t able to access the estate to do this, because they weren’t aware of the access undertaking given by the estate.

Even now, we’re struggling to find out what HMRC required from the estate, exactly what additional access the estate promised to provide to secure a tax exemption, or whether HMRC never really asked.

Some might argue that private land is private land, and that if landowners don’t want to provide access beyond that which they’re obliged to, then that’s a matter for them. But it isn’t when they secure a tax benefit for promising to allow additional access, but refuse to do so

Marking your own homework

Let’s start with the estate’s undertaking promising to allow public access on permissive bridleways, which don’t appear to exist, but which includes a link to further details about the undertaking, though that just points towards a contact for the estate who will provide ‘an anonymised copy or a detailed summary of the undertaking when requested by a member of the public’.

So, we asked, but the summary information disclosed gave no further information on the nature of the access the estate provides, save that it’s a condition of the exemption that the estate prepares a Heritage Landscape Management Plan (HLMP) in consultation with the Yorkshire Dales National Park (YDNP).

But we can’t get hold of the HLMP, with YDNP very apologetically explaining that they were prevented from disclosing a copy (even if, as we suspect, they’d otherwise be happy to), because HMRC advice is that such plans are a confidential tax record, so can’t be disclosed.

Incredibly, the position therefore seems to be that the estate can secure a potentially huge tax exemption, in consideration for an undertaking to allow public access, but the terms of the access which the estate will allow aren’t publicly displayed or advertised. You just get a one sentence summary which is confusing, because the distinction between bridleway and footpath access is deliberately blurred. The detail appears to be buried within the HLMP, but you and I can’t see that, because that’s deemed by HMRC to be a confidential tax record.

That means nobody can work out whether the public’s obtaining a good deal in return for the Duke’s tax exemption; what additional access is being allowed, what the public are entitled to, whether HMRC are making any efforts to check that the access which was promised is being allowed, and whether the exemption should continue, because HMRC are marking their own homework and advising against disclosing the document that might answer some of these questions!

Why does this matter?

We’ve now sent a freedom of information request (FOI) to HMRC to try and secure the HMLP, although I’m still waiting for a response to my last request about the number of cases HMRC has investigated where the withdrawal of a conditional exemption has been considered, and how many heritage asset conditional exemptions have been withdrawn. And I’m also still waiting for a substantive response to my attached letter of 21 April, asking HMRC to investigate whether the estate has failed to deliver reasonable access for the public in accordance with its undertaking and various supplemental questions.

Why does any of this matter? Well, increasing outdoor access for people cycling has always been a core part of Cycling UK’s off-road campaigning. Partly because, if you head off-road by bike in England or Wales, you’ll often find yourself limited in where you can ride by a confusing array of archaic laws which exclude you from close to 80% of the rights of way network.

But if you then start to look at who owns what land, it’s immediately clear that there are huge areas owned by major landowners, where allowing greater public access, and more access to people cycling, wouldn’t present conservation or other land management issues, and would bring huge public benefits.

Not a private matter when you get a public benefit

Some might argue that private land is private land, and that if landowners don’t want to provide access beyond that which they’re obliged to, then that’s a matter for them. But it isn’t when they secure a tax benefit for promising to allow additional access, but refuse to do so.

That’s when it stops being a matter for them, and HMRC then need to explain what they’re doing to prevent the public purse being depleted to benefit some very wealthy landowners, without any public benefit being provided in terms of greater public access to that land.

We’re busy going through the conditional exemption list and are investigating what’s happened with other estates where a conditional exemption appears to have been granted in return for an undertaking to allow public access to land. But feel free to have a look at the map, and if there’s an estate near you which has an exemption, which would be eminently suitable for cycling through or within, but doesn't allow it, please let us know.

The cycling route denied by Duke of Devonshire View

The Duke, the bike ban and the taxman View

The future of cycle access in our countryside View

What do the local election results mean for cycling in England? View