The Duke of Devonshire’s Estate receives massive tax cuts in return for allowing public access to its land – but is it keeping its promises? Guy Kesteven went to investigate where you can ride around Bolton Abbey, and what you’re missing out on

This weekend (24 April) marks the 90th anniversary of the Kinder Trespass, which led to the creation of National Parks and open access land. A lot has improved since then for public access to the countryside, but there are also some areas where rightful access is being restricted or denied.

This includes beautiful places like the Bolton Abbey Estate in the Yorkshire Dales, where the landowner is getting significant tax breaks by agreeing to open up access. There’s no signs of that actually being the case though, so what exactly are we potentially missing out on?

We’ve put together a fantastic fantasy MTB route on currently restricted access trails – you should be able to ride it, but currently you can't. However, it's a route that’s respectful, sustainable and within easy reach of millions of potential riders – who would no doubt put plenty of money in the tills of the Estate’s cafés, and those of local businesses too.

The battle of Cav Pav

You might have already heard of the Cavendish Pavilion. It’s nothing to do with the famous Manx road racer, but it’s been a part of Yorkshire and Lancashire cycling folklore for over a century. This oasis of tea and cake on the south-east corner of the stunning Yorkshire Dales National Park has been welcoming riders to the banks of the fresh flowing river Wharfe, just north of the spectacular ruins of Bolton Abbey, since it opened in 1890. Or should we say it had been welcoming riders, until it stopped access for cyclists and wheelchair users across the Wharfe bridge in 2021.

We’re not just talking about a sign here either. We’re talking about locked gates and night club-style bouncers stopping anyone on wheels from crossing the river from the north bank.

This was enough to make national media and the local TV news, and trigger an unofficial boycott of the Estate’s facilities by local riders and other visitors. While the gate has recently been re-opened, a large stone block across the opening makes getting through impossible if you have to lift your bike, trike or chair.

Storm in a teacup?

At this point you could be thinking that this seems like a big old storm in a relatively insignificant teacup. After all, there are plenty of other friendly, welcoming cafés and pubs in the immediate area where we’d encourage riders to refuel and rest before tackling the surrounding hills or heading home down the valley. The issue is that the Duke of Devonshire’s Estate – which owns the Bolton Abbey Estate lands and the area around Chatsworth House in the Peak District – claims an exemption from Capital Gains tax and Inheritance Tax on the basis that they will ‘allow public access to national heritage assets’.

Given that the Duke’s net worth is around £880,000,000 we can surmise that’s a healthy amount of cash they’re saving. In fact it’s estimated that when the 10th Duke died in 1950 it was estimated the Inheritance Tax would amount to 80% of the estate value. However the Estate avoids paying their dues on the premise of letting people like us – who don’t get any sort of tax relief and are therefore effectively subsidising the estate – potter or pedal around the 30,000 acres of mostly upland moors.

However, while pedestrians can access much of the land anyway thanks to ‘right to roam’ open access rights under the Countryside and Rights of Way (CROW) Act, only a fraction of the miles and miles of suitable tracks are open to visitors on bikes or horses. The Heritage Landscape Management Plan that the estate has to submit to the Yorkshire Dales National Park can’t be publicly accessed either as its classed as a confidential tax record by HMRC (the tax office).

Cycling UK has been pushing the Estate for more information, but so far the best response we’ve received has been a statement that its policy remained to continue the tradition of “allowing public access wherever possible provided this does not conflict with the conservation objectives and reasonable agricultural, forestry and game management requirements.” 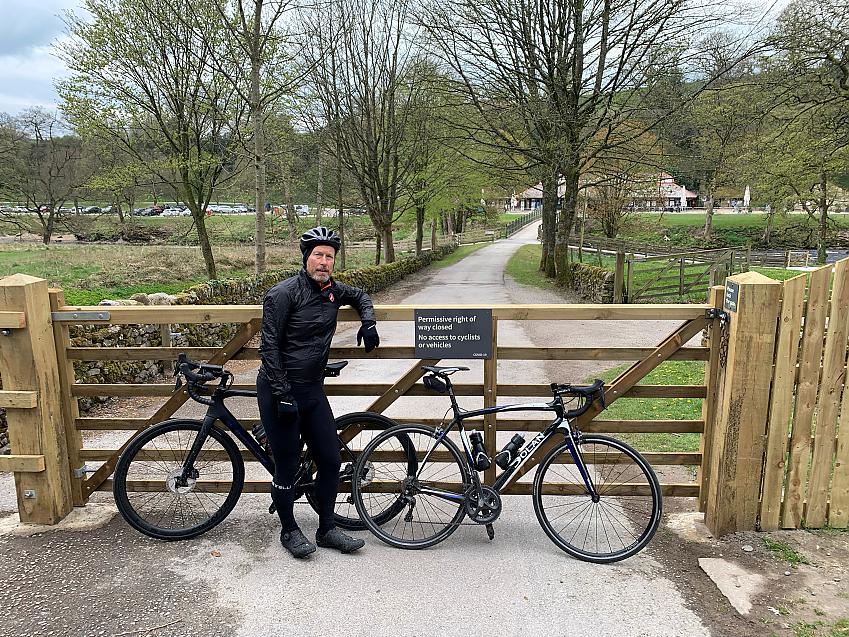 Having ridden the area for decades, I’ve seen no signs of any increase in the limited access to the estate though. Even more frustratingly, some of the tracks that are open to riders are the least sustainable, enjoyable and livestock-friendly in the area. That’s why we thought it would be a helpful idea to propose a route using currently restricted access trails, that would not only be better for riders but also the landscape and other Estate users.

While we can understand that some riders might be reluctant to add more of their money to the Duke’s near billion pound fortune, there’s no denying that safe parking and tea and cake before or after a ride are useful/essential things. Besides, it’s been shown all over the country that when access is increased riders rapidly become a very important part of the local economy, which encourages further access and facilities.

Our fantasy route starts from the Cavendish Pavilion with a respectful walk across the footbridge to the north bank. Yes, you could take the road on the south side, but it’s narrow, busy and already has a record of fatalities. Similarly, we’re not expecting to be allowed to ride the admittedly beautiful singletrack trails either side of the river. They already get crowded with nearly half a million users a year and it’s not safe or sensible to suggest it. Besides, the first bit of almost traffic-free road, up past the remains of the ancient oak and over the medieval bridge to the stunning hunting castle of Barden Tower, is a great way to warm up.

Riders who know the area will be delighted to hear we’re not going up the current bridleway opposite the Abbey either. Even at the bottom it’s soggy, with lots of gates and livestock, and then the grassy slog gets increasingly bad the higher you go. Eventual you grind to a cursing halt in an expanse of muddy tussocks that isn’t even fun downhill anymore.

Instead we’re winding our way up the solid, all-weather shooting tracks of Barden Broad Park, drinking in the ever-expanding views of Wharfedale, past the Barden Reservoirs and old mine workings to the top of the moor. Here we join the existing right of way for a fun, flowing singletrack ride across to the scarp above Rylstone.

Then it’s north across the CROW access land on moorland singletrack past the old cross and the obelisk war memorial to Peter’s Crag, where we join a Jeep track again, threading through old mine workings (pretty North Yorkshire ones obviously, not towering South Yorkshire industrial ones). Then it's a sweet singletrack descent (well it looks that way on Google Earth, we’ve obviously not ridden it) off the moor to join up with the old rocky farm track into Thorpe. 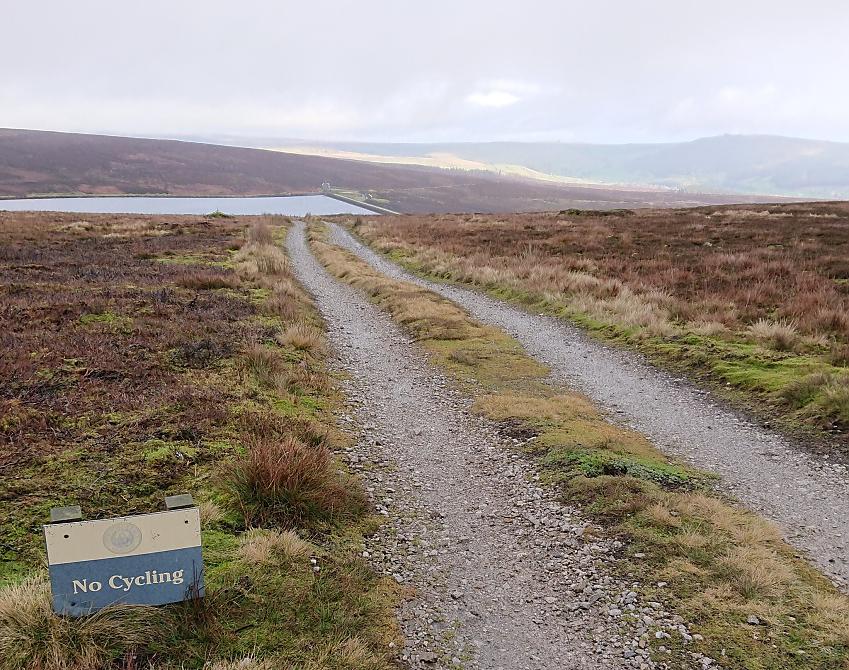 No cycling, but why? Photo by Chris Peat

The first moor done, you descend further through fields on the bridlepath to the fabulous old suspension footbridge over the Wharfe at Hebden. Then it’s a short bit of road down along the valley through Appletreewick with its splendid cycle-friendly pubs, campsites and the site of the old mountain bike livery that made this tiny village a riding epicentre for many years. Crossing the river again we take the daffodil-lined farm track towards Howgill before engaging winch mode up to the wonderful old aqueduct that arcs across the lower edge of the forest.

Thankfully once the hard pack fire road switch backs are done, the singletrack contours more to ease the gradient up to Simon’s Seat. And if you’re cursing us for using this as a climb not a descent, then appreciate the fact you can use the slow progress to take in the stunning views at your leisure. Plus walking pace upwards is a lot less likely to cause conflict with other potential users than slithering downwards.

Once you’ve got your breath back at Simon’s Seat our proposed adventure swings you north-east away from the popular path up from the Valley of Desolation (it’s actually really pretty). Making maximum use of more all-weather Jeep tracks several kilometres of rolling, mostly descending and deserted joy drops you into the evocatively Norse-sounding Noska Brow. We’ve deliberately dodged the bigger farms here to avoid any unnecessary interruption of the working landscape and make sure the area’s Viking successors don’t go berserker on you. (Even if we’re already contributing towards the £330,000 a year the estate gets in agricultural subsidies.)

Anyway let’s not be too bitter, because as much as that long descent is likely to be a highlight of the ride, we’ve still managed to save the best until last.

Do be careful though as while the narrow, dry stone wall-lined singletrack is a lovely bit of trail, anyone coming the other way is likely have their head down as they huff and puff upwards, so keep speed sensible and be prepared to stop in an instant. You definitely need to take care on the last section of shared path down to the Wharfe though, not least because the Abbey ruins on the far side are distractingly beautiful. 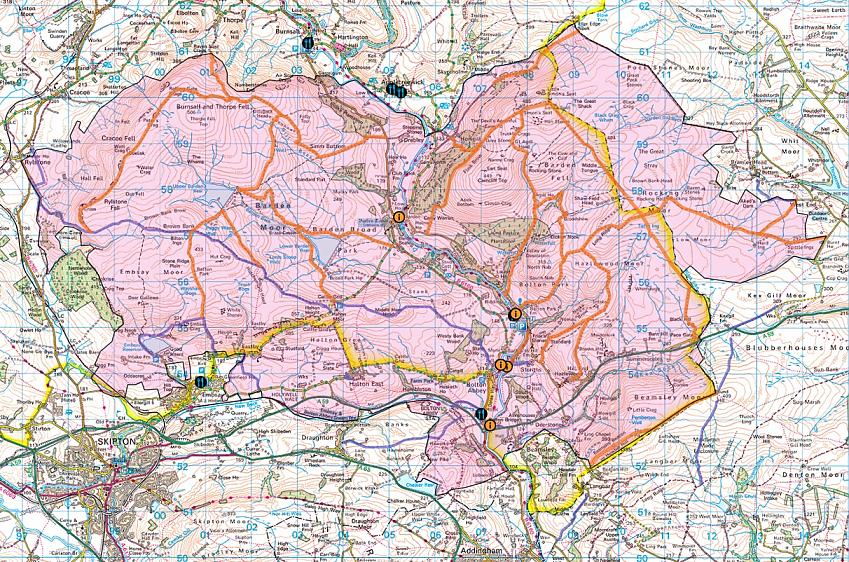 Then it’s a choice of hopping across the stepping stones or crossing the broad wooden bridge to the west bank before a gentle roll back to the start with 48km of truly wonderful mixed mountain biking memories to take home.

Well, that’s the theory anyway. While the route isn’t currently legally rideable, we hope it inspires people to realise what is possible. Not just here in a corner of North Yorkshire, but all over the UK where we’re being denied access to land that we’re paying for the upkeep of. And if you’re part of the estate team - or even the Duke himself - reading this, then we’d be delighted to bring a bike along, or even sit you on a tandem and take you on the route ourselves.

See the story map for more