Arriving at the end: Laura rides from Land's End to John o' Groats

Arriving at the end: Laura rides from Land's End to John o' Groats

A week ago, journalist and Cycling UK member, Laura Laker finished her challenge of a life time - riding from Land's End to John o' Groats (LEJOG) in nine days. In this article, the last of her blog series on the trials and triumphs of preparing and riding 1000 miles, Laura comes to terms with the end of a challenge that has kept her focussed for many months.

There’s a strange moment, right at the very end of cycling the 1000-odd miles from Land’s End to John o’ Groats, you finally round the last corner, and see it: the long-awaited road sign at the end of the road.

As we drew close, windswept long grass behind low stone walls either side, the remote beauty of the scattered coastal settlements beyond, and the breath-taking wild North Sea to the horizon, awaiting sight of that sign, I still had no idea how I’d feel at the end of my journey.

As it turned out, I cried.

On my face, on all our faces, was written the relief, the pride, the exhaustion and the elation at having made it. I stepped into the heavy finishers’ medal in disbelief which, a week later, hasn’t really left me.

On all our faces, was written the relief, the pride, the exhaustion and the elation at having made it.

And what a journey. I cycled the length of the country with the Deloitte Ride Across Britain event, the organised mass ride with 1000-odd participants, tackling a 980-mile route over nine days.

It’s supported, meaning bags are carried, rows of hundreds of identical tents are pitched each night, delicious meals are served in a giant mess tent, laundry is done for us, massages provided, along with the aid of medics, physios and mechanics – and by an army of incredible staff. Chaperones, volunteer riders, help participants with practical problems, boost morale along the way, provide shelter from the wind and, at times, physically push riders up hills. 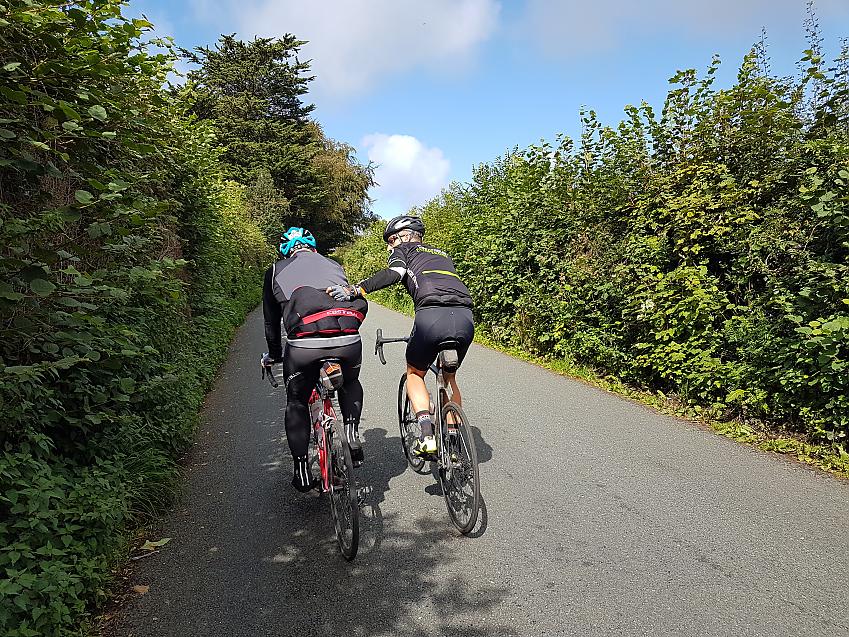 It’s quicker and easier than carrying your own kit and riding unsupported, but the experience is no doubt similar. For me it was a journey of nine days but in reality it’s been a focus of many months, as readers of this blog will know.

In those nine days, I ate my weight in Skittles, flapjack, sandwiches, bars of various description, and drank a lake(r) of water. I survived the highs and lows unscathed: the weather, the hills, the hours on the bike, and witnessed the variety of the UK landscape along its length. Remarkably, I largely enjoyed it – in a way the organisers call ‘type 2 fun’ – the kind that’s most enjoyable in retrospect.

The first days of riding LEJOG are tentative, testing out the legs on the never-ending series of steep hills Cornwall and Devon throw at you, and settling in to the challenge, knowing there’s many hundreds of miles to save those legs for. Passing St Michael’s Mount felt like the first milestone as we set off nervily on that first morning. Realising that, all being well, I’d end up at the exact opposite end of the country in a few short days was slightly mind blowing. 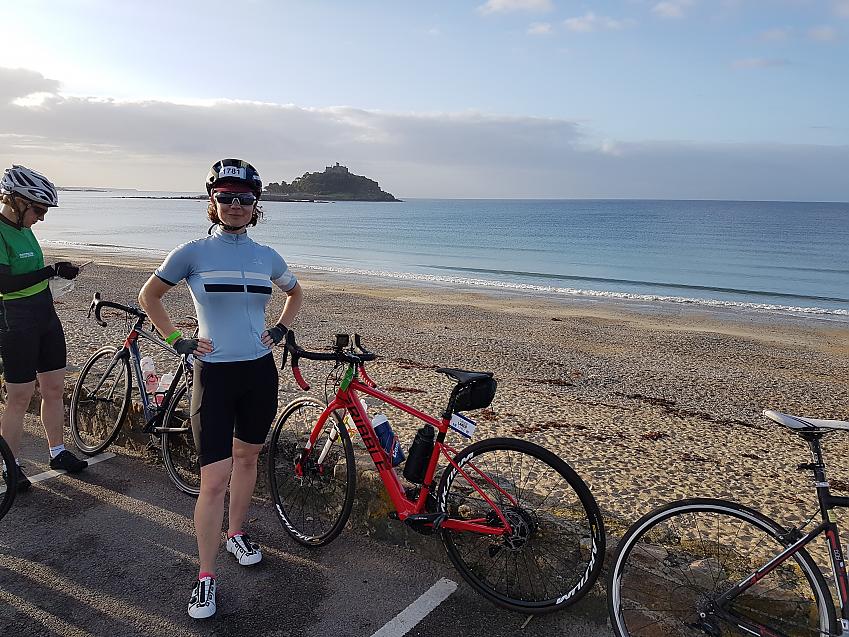 The next major milestone for me was passing through my home town in Somerset on day two. 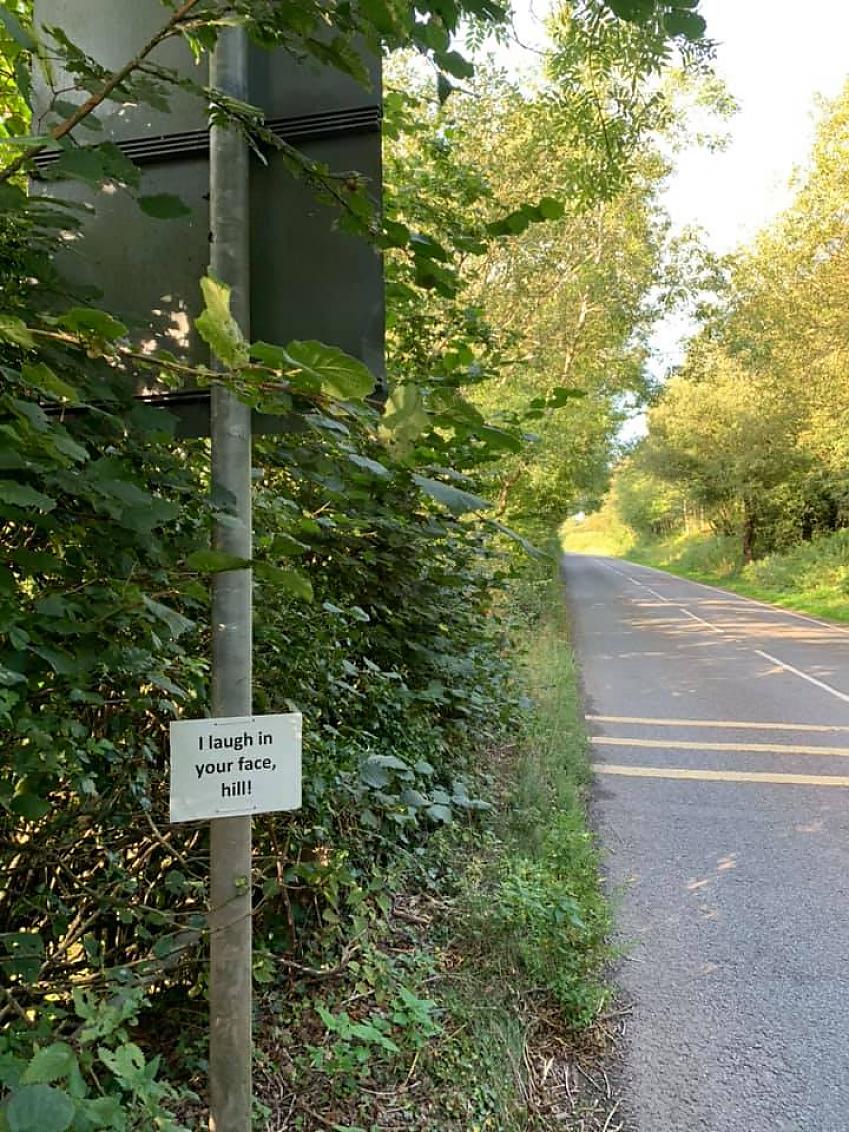 "My sister had put out signs along the road of encouragement and jokes about the long hill that precedes the town." Photo Laura Laker

My sister had put out signs along the road of encouragement and jokes about the long hill that precedes the town. I stopped for a quick chat and hug as I passed through, knowing I still had 70-odd miles left that day, including Cothelstone Hill, that looked like a wall as we approach, taking those who survive its steep, unrelenting ascent, onto the Quantocks. I once owned a car that barely made it up that climb.

Thanks in no small part to the electric bike I was riding, I enjoyed these hills – and, more importantly, the views they afforded.

Thanks in no small part to the electric bike I was riding, I enjoyed these hills – and, more importantly, the views they afforded.

Riding an ebike turned out to be the best decision I’d made regarding this trip, leaving me with more energy to appreciate the journey, and look around me. Thanks to blind guesswork, adjusting the level of motor assist, via an app, and a button on the top tube, the battery lasted even the 120-mile day into 45mph headwinds – though the red warning light was flashing for the last few miles.

Crossing the Severn Bridge on day three felt like a major milestone, one the blustering wind and drizzle couldn’t dampen, though we ended that day freezing and soaked to the bone, some of us with hypothermia.

Day four was sunny and short (at around 100 miles), but marked a drop in my energy levels and a point when the pain in my lower back became intense. We crossed the Manchester Ship Canal over a high, peeling metal bridge, with a feeling we’d suddenly made progress; leaving the next morning in a constant drizzle making our shoes wet for the rest of the day, my toes prunes when I finally removed them that night, and my face red with windburn. Lancashire and Cumbria were gorgeous, as we ascended to the moody summit of Shap Fell, before the endless, undulating road beyond.

There were long days I wanted to be over, like the day we cycled an endless main road bathed in cold rain and the dirty spray from other riders’ wheels in our faces.

Seeing the border sign for Scotland was a boost after a long slog out of Carlisle on featureless roads. The descent into Edinburgh at the end of the day revealed huge folds of sunlit hills suddenly illuminated into painterly colours of gentle yellows, blues and greens, the Forth Bridge majestic in the distance.

Crossing the Forth Bridge itself took my breath away, on a clear, crisp morning. I must have said wow 100 times. A man named David leaned out of his car window and gave me £3 for the fundraising pot just north of there.

There were long days I wanted to be over, like the day we cycled an endless main road bathed in cold rain and the dirty spray from other riders’ wheels in our faces, freezing and soaked. The 120 mile day with 45mph headwinds where I was saved by a chaperone named Tim, who found me grumpy and dejected and lifted my spirits and sheltered me from the wind for those final 20 miles. Thanks Tim. 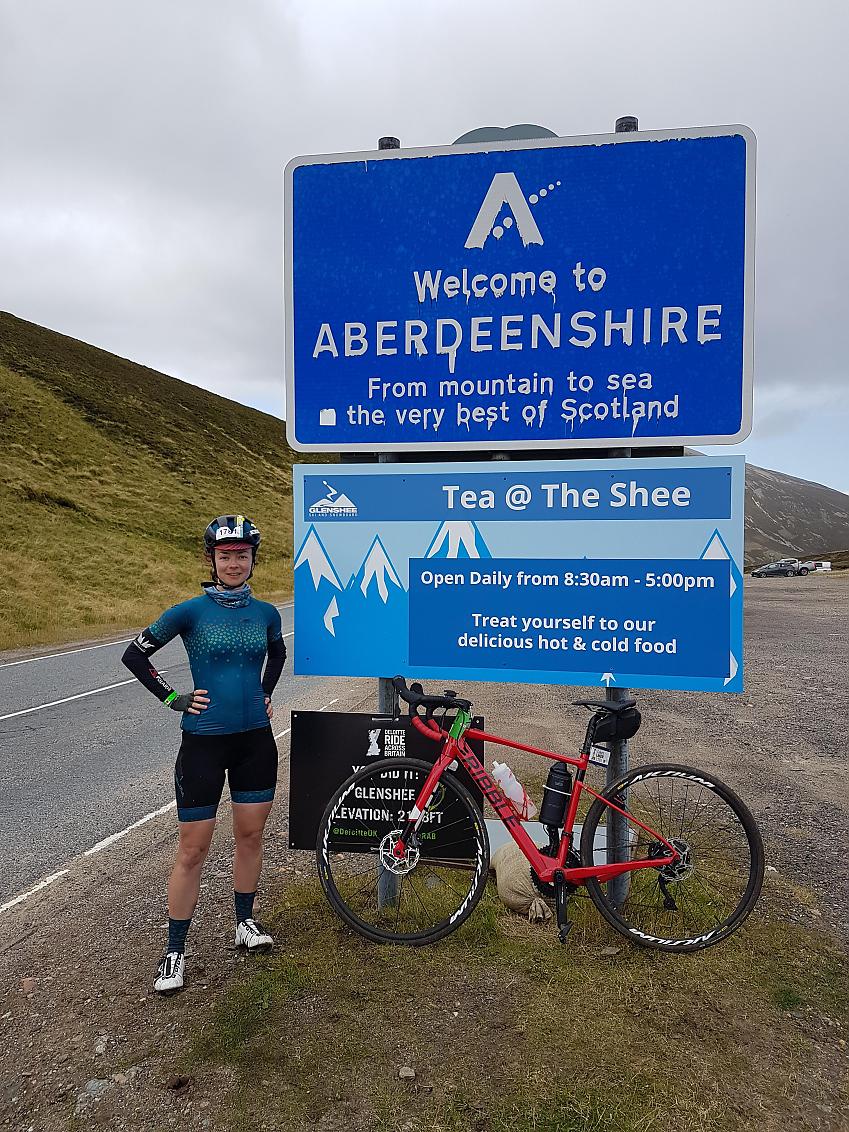 Welcome to Aberdeenshire - nearly there!

Scotland was beautiful, as advertised.

We scaled long, steep hills with ski lifts on top, like the magnificent Glenshee, and traversed red moorland bathed in golden light. Riders adopted grim expressions when the day’s final hill threatened to finish them and from somewhere on the road one man swore, very loudly, in anger and despair.

My heart leapt as we saw the North Sea for the first time on that final day, and pedalled the last undulating hills amid astonishing gusts of wind that blew lighter riders off their bikes. We’d crossed 23 counties, seen the sights, waved at children, laughed, cried, and some of us had fallen off – though not me, thankfully. And we lived to tell the tale. 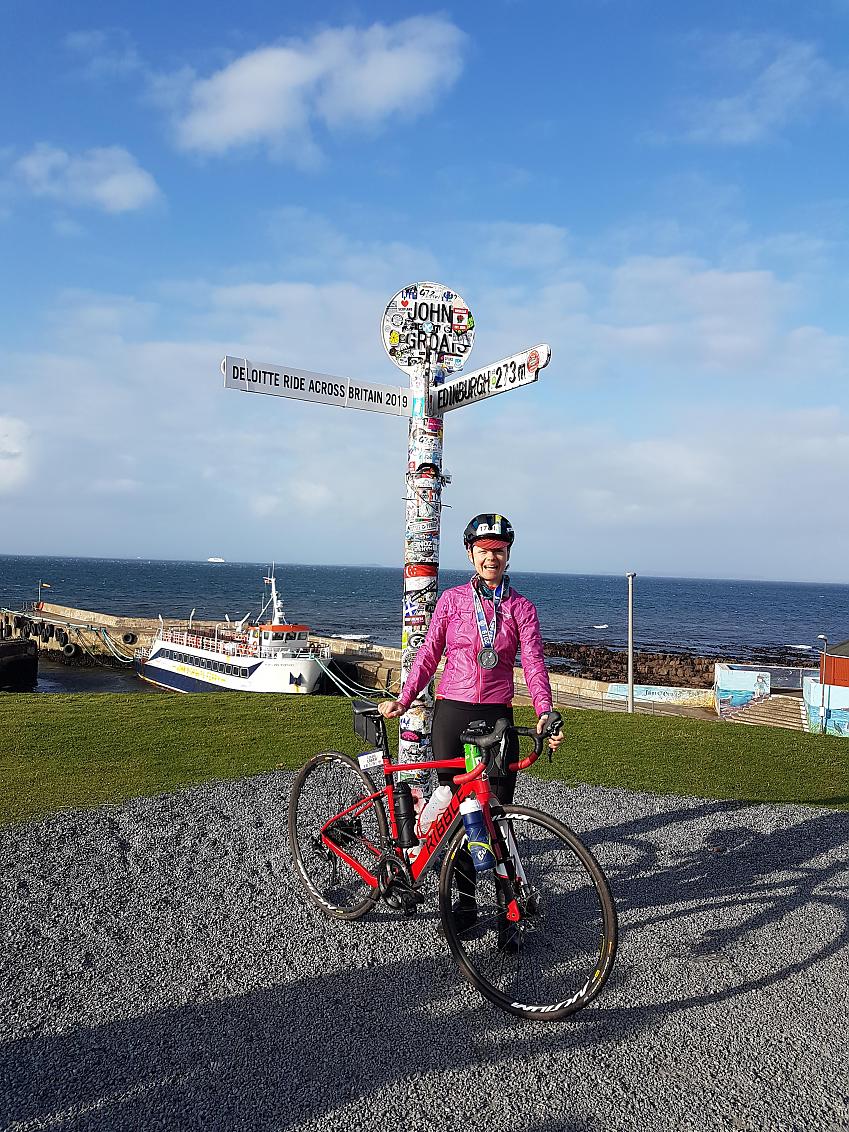