A surge in cycle commuting is good news for everyone. Journalist Laura Laker looks at what employers can do to help - and why they should.

The UK is experiencing a cycling boom, under circumstances few of us could have predicted at the beginning of 2020. Cycling levels exploded as people took up cycling en masse for exercise and then for everyday trips. According to Government data, cycling levels grew to more than three times pre-coronavirus levels at weekends – and, as people headed back to work, the cycling surge continued into the week. Cycling numbers doubled on many week days in June and July.

This growth in active travel is a bright spot amid a global crisis that has killed three quarters of a million people and wreaked havoc on our lives. As we return to work, with public transport capacity reduced, it’s important to limit short car journeys to fend off gridlock and maintain access for emergency services.

Cycling is a great way to do this – and employers have a role to play, not only in helping more staff cycle but in keeping those employees cycling as normal life resumes. Long-term, it could help reduce transport’s role in the looming climate crisis, too.

The Cycle-Friendly Employer (CFE) scheme focuses on what employers can do to promote cycling among staff. Set up in 2017, its aim is to support and showcase employers doing great things for cycling to work.

James Palser is Cycling UK’s Cycle-Friendly Employer accreditation project manager. Palser says interest in the scheme doubled or tripled over normal levels following the first wave of coronavirus restrictions, as employers looked to get as many employees back into the office safely.

“It has always been a no-brainer that cycling is better for people; that they are healthier, will take fewer sick days,” he said. However, prior to the pandemic “businesses rarely looked at the way that their people commute.”

Palser believes businesses can have a huge influence on the way people travel. Employers can make cycling to work easier and more appealing by providing showers and lockers, training or route planning, or offering the Cycle to Work scheme for tax-free bikes and equipment. 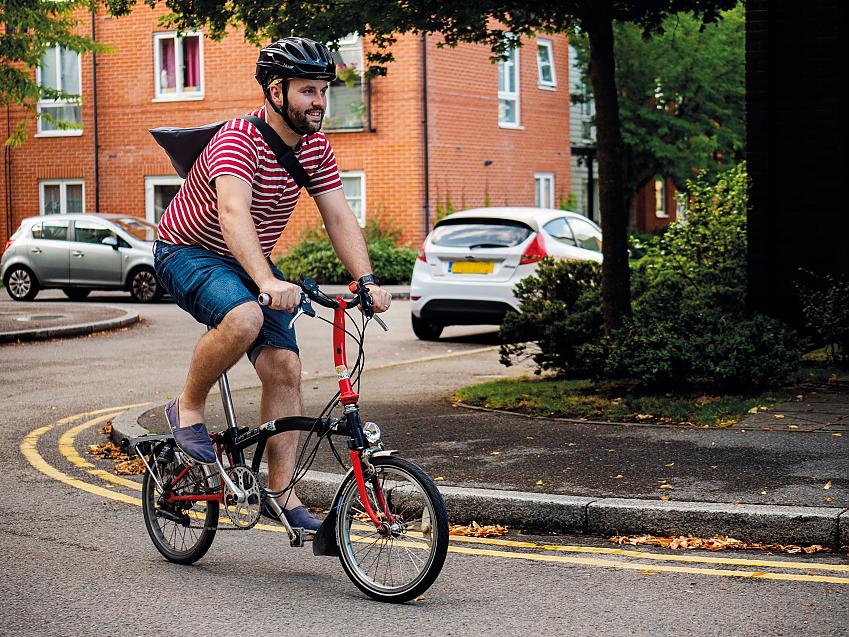 Palser points out that overcoming perceptions is as important as overcoming physical barriers to cycling. “As we know, cycling is seen as a bit of a niche activity,” he said. “Telling people ‘it’s okay’ and promoting it is a really big part of increasing uptake – but it needs to be done regularly.”

That might involve putting on a calendar of events, such as Bike Week in June and Cycle to Work Day in August, plus bike breakfasts and other communal activities and promotions.

“It’s not going to be for everyone but there’s a percentage of people who would cycle given the opportunity,” said Palser. “The time is now.”

Raleigh Bikes, a CFE-accredited company, pays staff 10p for every mile cycled, which can go into their pay packet or to charity. This autumn, Raleigh encouraged staff to cycle for a month, even if they weren’t commuting, as part of Cycle September. Staff are also encouraged to log their miles via the Love2Ride app.

In March, experienced cyclists at Raleigh led rides from Mansfield and Derby to the Nottingham offices for less experienced colleagues – and 40 staff took part. One of the most successful changes, however, were women-only showers. Bikes are available for staff to borrow, too.

Overcoming perceptions is as important as overcoming physical barriers to cycling.

Access to cycles can help people try cycling, and Brompton Bike Hire offers this service to businesses. The company’s biggest initiative this year has been Wheels for Heroes, 3,000 NHS branded Brompton bikes available to NHS staff for a free loan period, after which they can hire the bikes or buy their own.

Jonathan Kelly, Divisional Manager at Barts Heart Centre and Cardiac Network, administers Wheels for Heroes for the Trust’s London hospitals. He believes almost none of the participating hospital staff have stopped cycling since starting.

He said the Hospital Trust is keen to improve its cycling facilities, having almost doubled its cycle parking spaces to 260 using two-tier racks. Kelly said: “Even people who have done a 12-hour shift say ‘I would much rather cycle than get on the tube, it’s better for my mental health’. It’s about keeping up with demand now.” 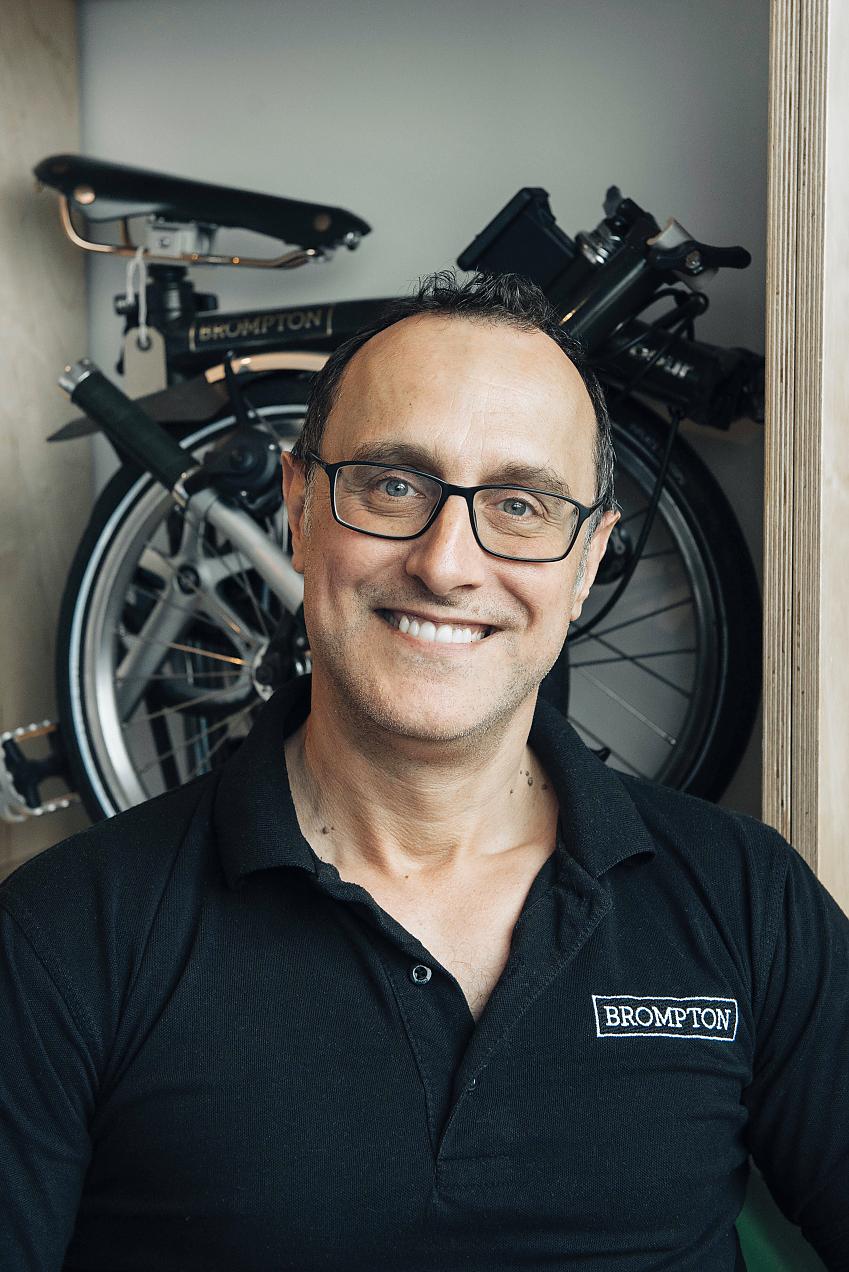 Julian Scriven, MD of Brompton Bike Hire, said companies can have corporate access to one of its 50 nationwide docking stations, which he plans to grow by a further 19 due to post-coronavirus demand. Average hires are three to four days.

Larger companies, and even residential developments, can have their own docks; a 32-bay dock takes up the space of a single car. At Sony, a couple of staff taking up cycling will become ambassadors to encourage others to follow them.

Scriven said: “For me there are three obstacles to getting into cycling. Firstly, it’s perceptions of safety: people will see the same roads very differently. Secondly, price, the cost of buying a bike. Thirdly, it’s perceptions of competence, and I always say that there’s a reason why people say ‘It’s like riding a bike’: within ten minutes you’re back into it.

“If you can give people access to a bike, you get over that cost barrier and, crucially, you’re giving the opportunity to ‘try before you buy’, which can also give them that competence.”

Lesley Lau is a photographer, who bought an electric bike after lockdown to carry her equipment for work, including a tripod, around London.

“I feel like it’s life-changing getting a bike in London,” she said. “Before I was using public transport and, if I had loads of stuff, an Uber. I’ve always wanted to cycle and I tried once but got really scared. Like so many people, lockdown gave me that push to start again, and now I’m cycling to work pretty much every day.

“My husband cycles to work; he took me on lessons, effectively. I love it and I’m annoyed I didn’t start earlier. Quite a few of my friends are in the same position.” 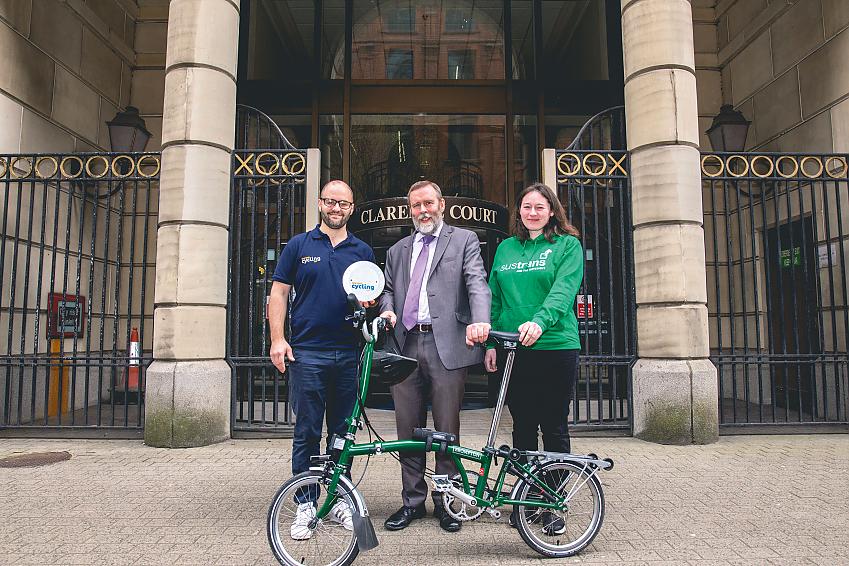 Training can be a crucial part of the puzzle in building confidence. Bikeability is the national body delivering what used to be cycling proficiency – and much more. Emily Cherry, Bikeability CEO, says instructors can also offer bespoke journey planning, even accompanying novice riders on an appropriate commuting route.

The Bikeability Trust is funding 3,000 adult cycle training places; coronavirus scuppered school-based training. “We think the key for adults is that it has got to be bespoke,” said Cherry. “Our offer is based on what the person needs.”

With kids returning to school in the autumn, and with more parents working flexibly, the Bikeability Trust is looking at developing kids’ cycling skills in tandem with adults’.

Making it better by bike

Training makes a difference but for the surge in cycling to stick, we’ll also need more hospitable road conditions for cyclists. On a local level, this is something that companies can get involved in – by lobbying local councils. John McCann from Queen’s University Belfast is doing this in Northern Ireland.

“People will say it’s too dangerous to travel to the university by bike,” he said. “That’s why it’s important to make it as safe as possible to get to work. There are people who maybe could be encouraged to cycle but feel they don’t want to  share the road space with a 40-foot articulated lorry. It’s a big concern. 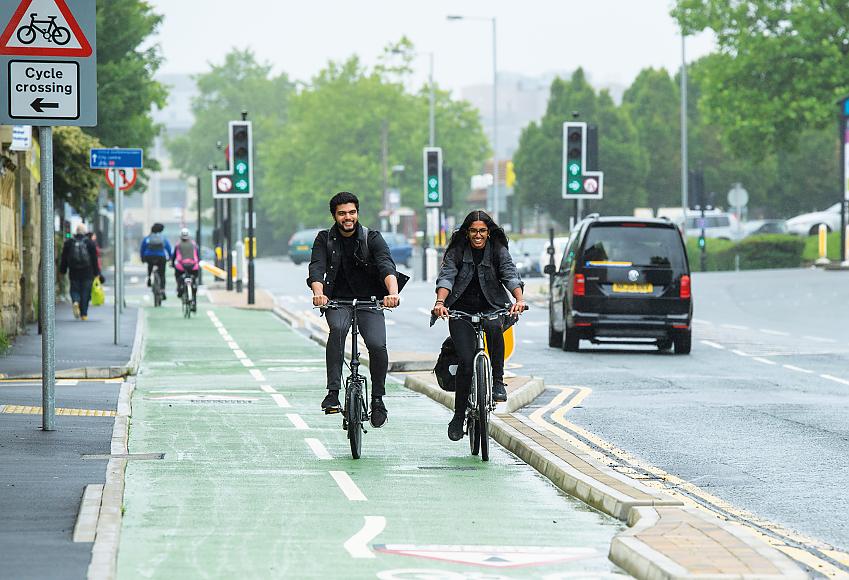 Traffic-free infrastructure is a big factor for new and returning cyclists. Employers are in a good position to lobby local authorities to provide it

“We want to see more cycle lanes, and we are engaging with the Northern Ireland’s Department for Infrastructure, which is responsible for sustainable travel. We have requested a meeting with the minister.”

For Paul Smith, a pop-up cycle lane made his 10km commute to Manchester City Centre possible by bike. “I tried to cycle on the road before and it was horrible,” he said. “The A56 is a four-lane road.

I occasionally cycled in on the canal towpath, which was okay but it’s a gravel path, it’s narrow, there’s some steps on it, it’s not direct, and on the last bit there’s loads of pedestrians.”

There are people who could be encouraged to cycle but don't want to share road space with a 40ft lorry.

The A56 pop-up cycle lane on a road he used to drive has transformed his commute into a leisurely bike ride. “I cycle in my work clothes, on my hybrid,” said Paul. “I think when you drive somewhere you steel yourself for a battle. You sit at your desk afterwards full of adrenaline. There’s something more calming and relaxing about cycling – and I feel less guilty about my lunch choices.”

Tim Hayter works in Canary Wharf as Finance Director for a fish wholesaler. When driving to work to avoid public transport became ever slower, as roads got busier after lockdown, he dusted off an old bike from the shed. “I save a lot of time,” said Hayter. “I feel more awake cycling in than I did getting in on the Tube or by car. You feel like you’re ready to go. It’s worth it for any company; I think it probably promotes wellbeing.

“It’s one of the problems we’ve been wrestling with during coronavirus: keeping our staff safe on their commute. A bike is an option where they aren’t forced into a small space with other people who are potentially infectious. It’s something we want to encourage.” 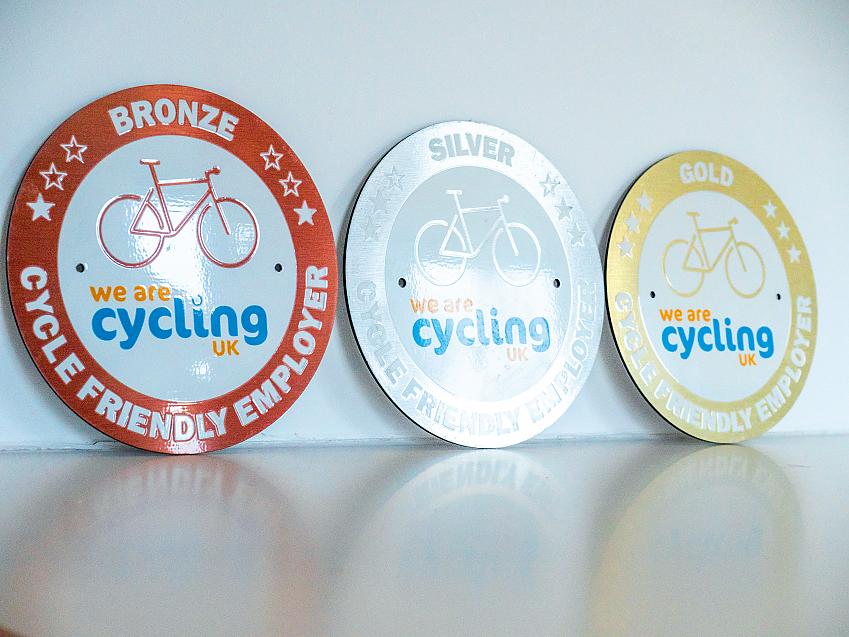 What is Cycle-Friendly Employer accreditation and why should companies sign up to it?

Cycle-Friendly Employer accreditation recognises a high standard of cycling provision that removes barriers to employees cycling to work, from obvious things like cycle parking and showers, to participation in campaigns like Bike Week or bike breakfasts to help normalise cycling.

To achieve accreditation, an employer is scored on compulsory measures across a number of categories. The higher the scores, the higher the rating the organisation is given: bronze, silver or gold.

Companies can sign up via a free online tool and answer questions on their existing facilities and activities.

Cycling UK will arrange a site assessment, which since coronavirus can be conducted virtually via Zoom, to give advice on potential improvements, before issuing an audit report and award an accreditation. Potential measures cover every element of cycling to work, from information and support with route-finding to physical facilities.

Cycling UK offers a ‘one-stop shop’ for employers wanting to boost employees cycling, as well as negotiated rates for cycle training and maintenance. Resources also include promotional material and practical advice on its website, such as what to wear as the seasons change.

Cycling UK Employer Membership is designed to help organisations: adapt the way staff travel to work; and demonstrate a commitment to investing in their employees’ health and wellbeing by championing cycling and
its benefits. Employer Membership provides:

For employers and employees.

The tools to get employees on bikes.

Keeping your employees motivated to cycle when working from home View